Another day of excitement, cold weather was expected on the mountain of La Pandera, but there was a lot of HOT action on the climb, Valverde’s team tried to keep it together, but they weren’t ready for the Astana/Kazakh one two!

Yesterday’s stage was a classic, the best bit of racing we’ve seen for a while, the Spanish press are saying this morning that if Valverde had kept his head on the climb of Monachil he would still be in the leader’s jersey, that’s history now and he says he will be attacking today to get the jersey back.

Granada to Sierra de la Pandera, 153.1 kilometers with the Alto de las Encebras (3rd cat) at 45 kilometers then the climb of Alto de los Villares which carries on to La Pandera, they are classed as two climbs, but with a short drop between them it looks like one big slog to the summit finish.

A group of hopefuls went off after only 5 kilometers and built a lead of four minutes, the group consisted of; Nicki Sorensen (CSC), Olivier Kaisen (Davitamon), Benoоt Poilvet (C A), Raъl Garcнa De Mateo (Relax), Markel Irizar (Euskaltel-Euskadi), Pedro Horrillo (Rabobank) and Pierre Drancourt (Bouygues Telecom), none of these riders were any threat to the leaders, but Astana and Caisse d’Epargne kept the gap manageable.

As we get closer to the Alto de los Villares, Caisse d’Espargne started to lift the pace and lesser riders were struggling at the back, up the front Sorensen has a little go on his own, then is joined by De Mateo and Kaisen, through the sprint at Los Villares they are one minute twenty seven seconds ahead, but on the Alto de los Villares the inevitable soon happens and the bunch eat them up and spit them out.

Jose Garrido (Quick-Step) jumps away from the bunch, why? Who knows, he was soon back in the fold. Sorensen was the last of the escapees out on his own and not to be pulled in by the black, white and red arrow (Caisse d’Espargne team), the pace was kept high and Astana were sitting back in the armchair watching and waiting. Iban Mayo (Euskaltel) attacked and was then joined by mountains leader, Martinez (Discovery) who then in turn passed Sorensen, whose day of glory was now over.

At the top of the Alto de los Villares, Martinez collects more mountain points; he and Mayo have a lead of 42 seconds. The two could stay away for the finish, but the big guns haven’t fired yet. La Pandera is 8.3 kilometres long, goes to an altitude of 1,840 meters, has an average gradient of 6.4% and kicks up to 15% max, should suit Valverde more than Vino. Caisse d’Espagne are still doing the work as Perez (Cofidis) attacks on the steep part of the climb and catches Martinez, but Karpets pulls the bunch back up. 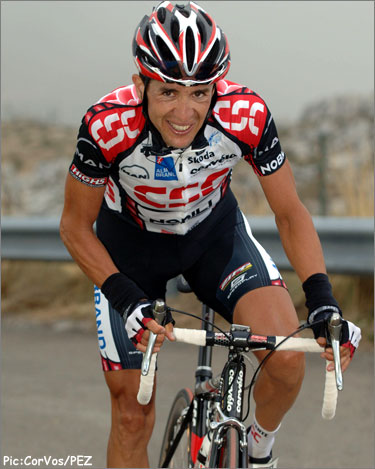 Carlos Sastre was an unfortunate loser on the day – he got popped off of the podium and Andrey Kashechkin replaced him for two Astana’s in the top 3.

Valverde only has two riders with him as does Vinokourov while Discovery has three, Sastre on his own. Astana move to the front and Kashechkin attacks, then Vinokourov puts in the body blow, but the motorbikes get in the way, he’s an angry man and flying.

Valverde has nothing to give back, the gap is getting bigger, this is Vinokourov winning this year’s La Vuelta. Valverde struggles on the wheel of his team mate Rodriguez and loses time with every pedal stroke. As the temperatures drop Vinokourov starts to slow, but it is very sleep at this point (17%) with less than 3 kilometres to go. Kashechkin gets to his leader as behind Valverde catches and drops the group of Sastre and looks to be getting into a rhythm for the climb, is it too late? 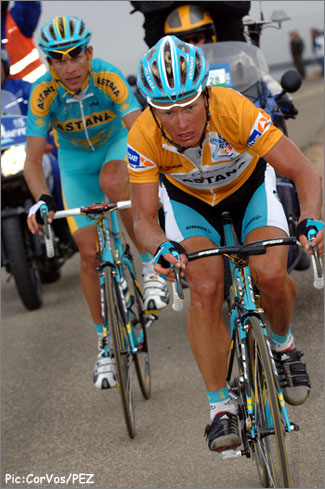 Unfortunately for Valverde, he ran into an incredible 1-2 punch from Astana’s two superstars, and instead of gaining time back – Vino got more – his lead is almost a minute now.

Valverde is coming back to the Kazakh pair as the cloud shrouds the mountain with 28 seconds between the two main protagonists, Gomez Marchante (Saunier) is with Valverde as the flying Kazaks cross the line – it’s Kashechkin first, Vino second and they are in each others arms! Gomez Marchante third and Valverde at 32 seconds in fourth, Sastre comes in 10th at 46 seconds to lose his third place overall. Caisse d’Epargne had the big plan today put the Kazakhs whopped their ass in the end.

What a day! Racing like it should be, the top men attacking and not just waiting, more time for Vinokourov and Kashechkin moves up overall, it’s Kazakh National day or should be!