Barring disaster or act of God, Alexandre Vinokourov (Astana) will stand on top of the podium in Madrid tomorrow as winner of the 2006 Vuelta. The little Kazakh with the build of a boxer cemented his win in the grand style, taking his third stage win of the race in the stage 20 time trial over 27.5 kilometres from Rivas Futura to Rivas Vaciamadrid.

Pro Tour leader, second on GC and the man who had looked like he could win this Vuelta before Vino showed such sparkling form in the mid-race mountains – Alejandro Valverde (Spain & Iles Baleares) knew he had one slim chance today and went out like he was riding a prologue, posting best time by 3 seconds from Vino at the first time check at 11.3 kilometres. 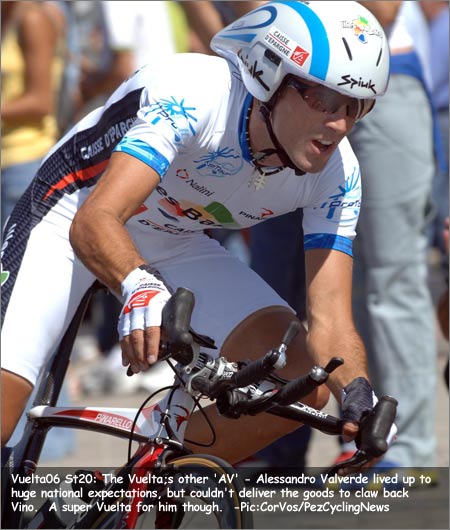 The Spaniard threw caution to the wind and was riding the early bends and roundabouts visibly quicker than the more-measured Vino whose slow cadence gave away the fact that he was riding a huge gear.

The ergonomics on a low-pro channel Vino’s huge power more effectively than his road bike position, he wastes less energy with no bobbing shoulders, but his short legs pump like those of a power-lifter doing squat-reps.

By the second check at 20.5 kilometres those ever-truthful stop watches told the story of a desperate Valverde going-out too quickly and a metronomic Vino efficiently churning the big braquet to go up 12 seconds on the Spaniard; a margin he increased relentlessly to 19 seconds on the line at 27.5 kilometres where Valverde was a wasted third on the day.

It was an exposed, unattractive course with long, wide straights, drags and roundabouts aplenty but no real climbs – ideal for the ‘chrono-men.’

There was a light breeze and it was pleasantly mild, not the hellish-hot conditions the early stages provided.

Long-term early leader and eventual fourth, Laszlo Bodrogi (Hungary & C.A.) was no surprise, given a palmares which includes multiple Hungarian time trial championships, the TT in the Three days of De Panne and world championship medals against the watch as a pro and under-23.

The rides of David Millar (Scotland & Saunier) and Stuart O’Grady (Australia & CSC) certainly were surprising, but for different reasons. 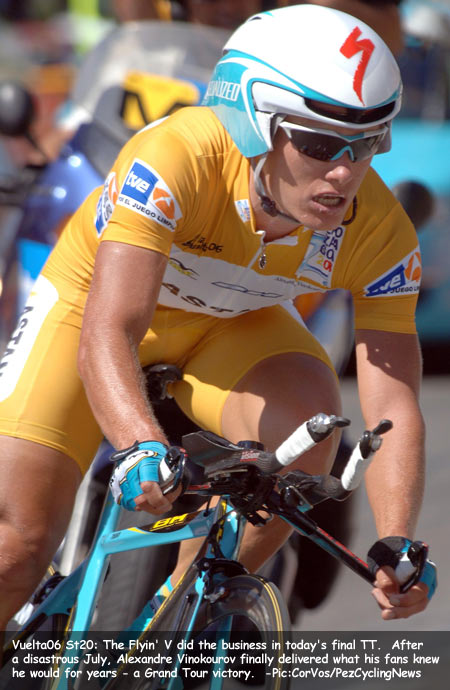 Whatever-else you might think of Bjarne Riis he certainly knows how to get the best out of his boys in the ‘race of truth,’ O’Grady was an eventual sixth; big Russian, Vladimir Karpets (Iles Baleares) sneaked in between the Aussie and Bodrogi for fifth.

The Aussie’s Spanish team mate, Carlos Sastre rode a fine test too with seventh spot, taking time back from third overall Andrey Kashechkin (Kazakhstan & Astana) but not enough to get to kiss the pretty girls on the podium tomorrow; he started the day fourth on GC and remains there.

Continuing the surprises, long, lean Samuel Sanchez (Spain & Euskaltel) was one of the last guys expected to depose Bodrogi from top-spot, but that was exactly what he did.

The slim, orange-clad stage 13-winner hacked a whopping 20 seconds from the Hungarian’s time to go top and only the huge thighs of Vino could keep him from the his second bouquet of the race by a narrow six seconds.

The Basque is an autumn bloomer, winning the last year’s European season-closing Escalada a Montjuich in Barcelona.

The day was all about Vino though, any doubts about the validity of his Vuelta win were effectively dismissed on this showing – he just needs to talk to Cipo as his style consultant now; baby-blue over-shoes and aero crash-hat with a gold skinsuit?

Super-Mario would never have ben seen dead with a clash like that.