Transition time in the Vuelta with a 182km flat stage and it was Astana’s Vinokourov showing his form. After being caught in the last 500m yesterday Vino had a point to prove today.

It was an early start for the peloton in today’s Stage 8 as they kicked off just after 10am, which is unusual for a Grand Tour and even more unusual for Spain given that dinner is often held between 10pm and midnight. There were obviously some riders who are good in the mornings though as the stage started at an incredible pace as various riders tried to make the day’s break, but with nothing succeeding early on. It wasn’t until the 25km mark when Kevin Van Impe (Quickstep) went off the front by himself that the bunch decided to let the break go. No one went with poor old Kevin and he began his long, long day out by himself – only 157km to go… 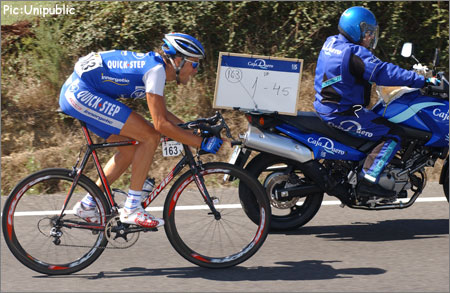 The sprinter’s teams were all keen on a sprint today though and they never let Van Impe’s lead get beyond a maximum of 5m50s, despite the fact that he was averaging 46kph. Credit Agricole, Milram and Liquigas were notable in their chasing efforts for their respective sprinters, giving surprise Vuelta leader, Janez Brajkovic (Discovery) and his team a virtual day off. 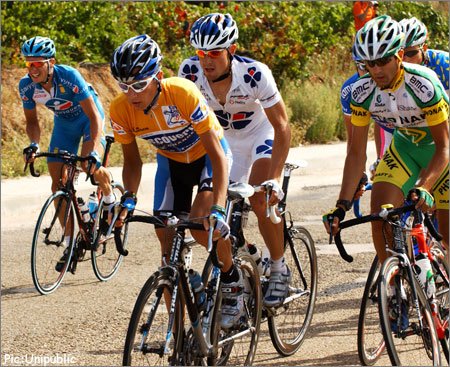 Life is good for the young Brajkovic.

An amazing effort by the young Slovenian who will be trying hard to hold onto the Gold leader’s jersey to Madrid. The gold one would be the best of course, but keeping any of his current jersey’s to Madrid would be an amazing effort for such a young rookie.

Back to the day’s stage and as everyone knew would happen, Van Impe was caught with 9km to go. It was Credit Agricole again doing the lion’s share of the work for their Vuelta’s points leader, Thor Hushovd. With 4km to go it was Pez favorite and absolute strongman, Maggy Backstedt (Liquigas) who was powering the front of the peloton with big gaps appearing behind as everyone was struggling to hold Maggy’s wheel. After an amazing turn of speed by the big man, Milram and Credit Agricole then took over sustaining an extremely high pace.

With one km to go it was Maggy’s team mate Luca Paolini who attacked the uphill finishing straight to try and take the win, but he was overtaken by the unluckiest man of yesterday (and perhaps this year), Alexandre Vinokourov who flew past the Italian and was able to hold on for the win. Crossing the line hands aloft and gesturing to his jersey – Astana! 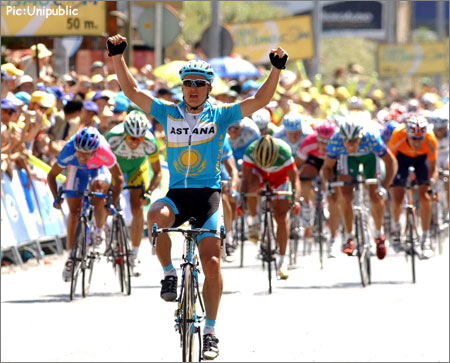 Alright then! Vinokourov pulled off yet another one of his final K attacks. He’s got a damn fine knack for it.

A great victory by the attacking Kazakh who has been up against all odds this year and has somehow, despite all the disappointment and problems has come to the Vuelta highly motivated and starting to show very good form. One stage win in his back pocket, could Vino now start aiming for the GC? He picked up a 20second win bonus today, moving him to only 2m07s off the leader’s jersey. The Vuelta’s gold jersey may not be the yellow one he was aiming for in July, but it would be a worthy consolation…can he do it? Keep it tuned to Pez for all the Vuelta news, in what is shaping up to be a superb race.