Kazakh warrior Alexandre Vinokourov has taken back-to-back victories after a classic one-two punch from the Astana team. Vino poured out a summer of pent-up frustration all over the Vuelta peloton, to shake up the GC on the slopes of today’s final ascent – the Alto de La Cobertoria.

Vino and team-mate Andrey Kashechkin reacted to an attack by Sylvester Szmyd (Lampre) with 6 kilometres to go, to put the hurt on the rest of the elite lead group. The sky-blue duo accelerated away with Vino doing most of the pulling. 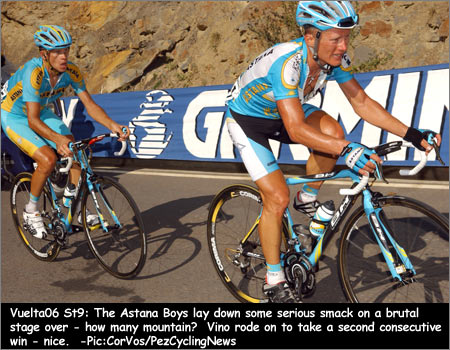 Alejandro Valverde jumped after them in the closing stages and managed to claw himself up to Kashechkin. Vino had already flown and wasn’t going to come back and he soloed home for the win.

Valverde got a pretty nice consolation prize, snaring himself the maillot d’oro, as Discovery’s Janez Brajkovic felt the effects of a full-on first week catch up with him. The young Slovenian was a couple of minute down on the leaders, relying on Tom Danielson and Stijn Devolder for pacemaking duties.

Things really kicked off on the hors categorie Alto de San Lorenzo about 50kms from home, with the breakaway group splintering and three leaders now clear – Arroyo, Martinez and Anton. Behind, the field was in meltdown, too, as Carlos Barredo drove things for Vino’s Astana team.

With the leaders back in the fold, Paolo Bettini tried a move with 20kms to go, and pulled out a nifty lead of 45 seconds. But the steep grade and the power being laid down behind saw him swamped once Vino and Kashechkin had jumped.

Vladimir Karpets did his job to keep Valverde in touch with Kashechkin, his closest rival for the lead, and that helped the Caisse d’ Epargne boys snag the lead.

Pez diarist Dario Cioni was active throughout the stage, even spending a good few kms off the front by himself. Unfortunately, it wasn’t his day, but we’ll hope to bring you the inside story of his adventure in the next couple of days.

Tomorrow gives the riders a chance to rest up before resuming with a flat stage on Tuesday. Unfortunately, the field numbers will be reduced as we had a few more DNFs today – Bernard Kohl crashed out, and T-Mobole lost his team-mates Griepel and Ziegler, too. We also lost Jalabert, De Vocht and Isasi among others.

Pez will have plenty more action for you even if the roads are quiet, so don’t touch that dial!