As it becomes increasingly likely that Rabobank’s ‘Russian Emperor’, Denis Menchov will be crowned in Madrid on Sunday, the lesser knights continue to joust for lesser, but still desirable trophies. In the thick of the action yet again, is our champion, Magnus Backstedt.

PEZ: No need to ask about the form – fifth again, today!

Magnus: Yeah, we agreed before the stage today that I wouldn’t be giving Beltran as much help as I usually do. I said I would keep an eye on him and he could sit on my wheel to keep out of the wind, but I wanted to look after myself and give the sprint a real go.

PEZ: You would have been higher, but a Milram baulked you, didn’t they?

Magnus: I think I came from three or four wheels too far back, as I was coming-up, Marco Velo swung-off and I hesitated for a second, I had to choose, either go between him and the barrier, or go the other way, but catch the wind. I chose safety and went the long way round, I was pleased with fifth, but again my positioning wasn’t the best. Bennati and Petacchi are in a different league and for me to be up there with them, actually coming back at them at the line, I can’t be unhappy. 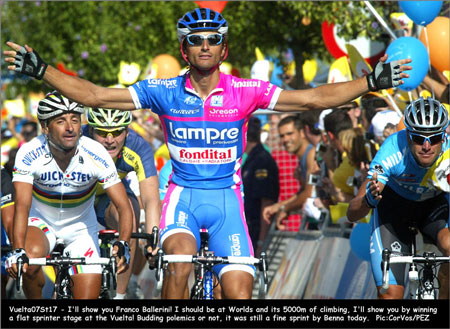 Our man Maggy peaks through behind winner Bennati.

PEZ: With your form, wouldn’t it be in order to have a Liquigas train you could catch into Madrid, on Sunday?

Magnus: We’ve not really got the guys with the horse power for that, you need extreme power to be able to sit at 70 kph coming in to the finish. Our guys would work all day for me, but they’re just not suited to that type of thing; in fact, Mauro Da Dalto did a lot of work for me today and only left me at four k to go, by that time the speed was up and you’re pretty-much on the wheel that you’ll be on until the finish straight.

Magnus: No, not really, I’m happy for Klier, he works hard and covers the breaks, I was surprised his breakaway group stayed clear, but it was terrible rain that day and it disrupted the chase. Sanchez is a very classy bike rider and an excellent descender; he can get up there in bunch sprints, so there was no-way a pure climber like Beltran was going to beat him in a sprint. Duque is classy too, that was a hard stage he won, 2,600 metres of ascent, a hard slog; the break went on a climb so he had the legs, that day. Bennati, well the big sprints are a little bit of a lottery, he opened-up just before Petacchi today, got round him and held it to the line; it’s as if whoever jumps first from the two of them will hold that half wheel to the line.

PEZ: How was the rest day?

Magnus: I hated it! On the rest day you just want to lay on your bed and relax, you don’t want to go out and do 50 k. My head was just switched-off for bike riding and it was as if I was riding someone else’s bike that was about four centimetres too big for me, it hurt!

PEZ: Is tiredness among the chasing teams partly responsible for those breaks staying away?

Magnus: It’s rather that that Menchov’s team are happy to let the break go so that they can control things more easily. The tiredness is there, though; you see it on the climbs, I’m usually one of the first to struggle on a climb, but now there are loads more guys off the back before I start to feel it, but maybe that’s just because I’m going well? 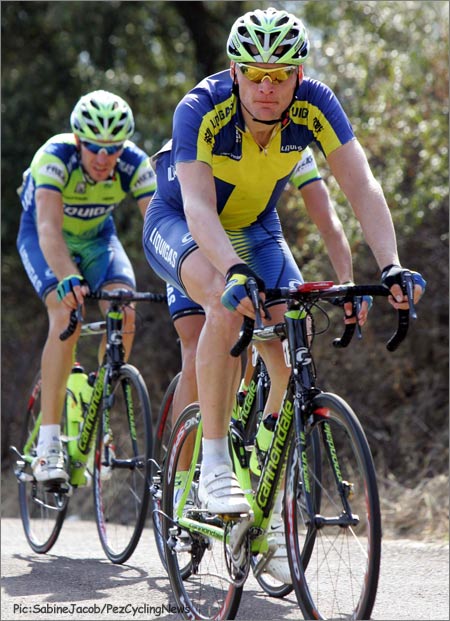 PEZ: Of the Grand Tours you’ve ridden, how does this one compare for toughness?

Magnus: It’s difficult to compare, but this is a race with a lot of climbing in it and like I was saying, guys are getting tired. If you’ve been racing since mid-January, this is a hard race. I’m going better than I have for a long time, I’m healthy and strong, and whilst it’s hard to compare I’d say I’m going as well as my best Grand Tour, which was the Giro in 2003.

Magnus: Yeah, they’re not being kind to us, are they? I think tomorrow that a break will go because it’s a long way from the top of the last climb to the finish and Menchov’s guys will be happy to let that go. Friday is different, it’s short stage and a mountain top finish; it’s the guys who are in the minor placings last shot at Menchov.

PEZ: Will Efimkin, Evans and Sastre attack, or defend their placings?

Magnus: Sastre will definitely attack, he’s not happy with his placing and he can’t do anything in Saturday’s time trial, so he has to go on Friday. The last climb is all or nothing, so they all might go on the attack, but having said that, I don’t think they’ll unseat Menchov, he’s looking so strong.

Magnus: I hope not, I want to do that! On Friday I’ll have to watch the time cut and not think too much about Saturday, but I’m going to try and look after myself; 25 kilometres is my kind of distance. We don’t know what the course is like, it appears to be flat, or at least without any big climbs, we’ll know better when we see it, but I’m going to turn myself inside-out in that one.

PEZ: All the best for Saturday and we’ll talk to you in Madrid, but mean-time; “Det var intressant! Tackar.” (That was very interesting. Thanks)

Magnus: Your Swedish is getting good!