Twenty kilometers of flat road could decide the final podium places of this year’s La Vuelta a Espaсa. Menchov should be safe, the men that to be worried will be Carlos Sastre and Cadel Evans, their podium places are in danger and that man Samuel Sanchez is after glory, again!

Today’s stage is the last time trial and the last stage that could make any difference to the overall, except it probably won’t do anything to the lead of Denis Menchov, the only battle that really matters now is the one between Carlos Sastre (CSC), Cadel Evans (Predictor-Lotto) and Samuel Sanchez (Euskaltel-Euskadi) who are sorting out the lower steps of the podium. 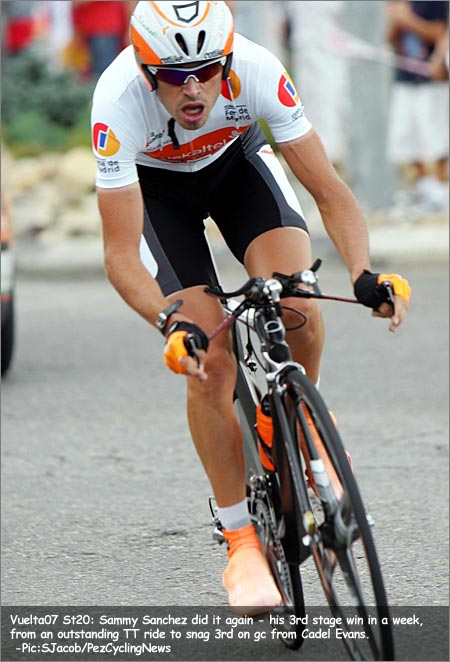 The Course
Twenty kilometers of flat road that starts and finishes in Collado Villalba, basically it goes to Torreldones and back, fast and smooth roads without any technical stuff. Collado Villalba is situated 40 kilometers from Madrid and sits amongst the mountains of the Sierra de Madrid at over 1,000 meters altitude.

Magnus, the early leader
Our man, Magnus Backstedt (Liqugas), told Ed Hood earlier this week he would like to do something today, so he laid down the best ride early on with a time of 22 minutes and 51 seconds, his nearest rival for a long time was Alexandre Usov (Ag2r) with a time of only 14 seconds slower. Sadly BIG Magnus didn’t stay on top for very long as Santos Gonzalez from Karpin-Galicia goes 22 seconds faster. Nice ride by stage 14 winner Jason McCartney with a time of 22:36, but it’s early days yet and we will need to wait a long time until the “stars” come out tonight (well this afternoon).

Christian Vande Velde (CSC) has the speed to catch Saunier-Duval’s team leader, Gomez Merchante, who must be looking forward to Sunday night as he has been going worse everyday. Jurgen Van Goolen (Discovery) looks good in the mountains jersey, pity it belongs to Menchov, as does the Combined competition jersey, if Menchov scores more than 3 points he will also have the points jersey, this will make the presentations tomorrow a little repetitive! 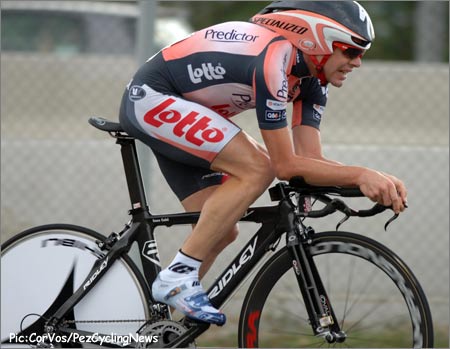 Losing a podium spot in a 20km TT is not how anyone likes to sign off a long season.

Could the Overall Change?
The overall could change today, Menchov, baring accidents or punctures, is home safe, the next three places are still up for grabs, 56 seconds split Sastre, Evans and Samuel Sanchez and they are all over 3 minutes behind Menchov. In reality Evans could overtake Sastre for 47 seconds, but if Evans cracks then the door is open for the Euskaltel rider to move onto the podium, he only needs 9 seconds to pass the Australian.

The top ten riders kick off with Quick-Step’s Carlos Barredo who is just over 10 minutes down on overall and has no chance of moving ahead of “Triky” Beltran who is a good minute and a half in front of him, after Beltran we have Igor Anton followed by the Russian pair of Karpets and Efimkin, … well would have had except they changed the start order to split the Caisse d’Epargne pair. The surprise of this Vuelta, Ezequiel Mosquera Miguez of Karpin-Galicia, will want to hold his fifth place overall, he has 24 seconds in hand from sixth place Efimkin, he will have to go sum to hold on to the best place in the best race he has ever ridden. 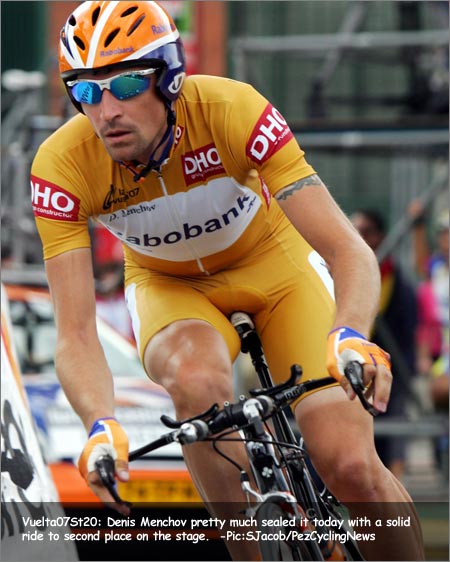 The Four that Really Matter
Samuel Sanchez is riding in the white jersey of the Combination classification and said before the start that “9 seconds aren’t much, but Evans is fast in the TT”; he will try his hardest and will be riding a 55 tooth chain wheel today. Evans and Sastre kick out of the start house, Sastre receives a much louder reception, he needs all the help he can get to keep his second place overall.

The first time check at 7.3 kilometers, Sanchez is 4 seconds faster than Evans, Sastre is two seconds slower than Evans and Menchov was fast enough to be in third place.

As the rain started to fall at the second time check at 15 kilometers it was becoming obvious the Samuel Sanchez was on the ride of his life as he moves 13 seconds in front of Evans, putting himself onto the podium, Menchov was in second place at 2 seconds and Sastre wasn’t doing too badly either, only losing a few more seconds to the others.

At the finish Samuel Sanchez flies in to take the stage honors and put himself in third overall, Sastre keeps second place with a strong ride and Menchov is second on the day and as expected stays in Gold, only tomorrow’s sprint into Madrid to go and the Russian will have his second Vuelta victory.

Loser today has to be Evans, he is now fourth, all the other placings stay the same, Menchov has the Mountains, Combination, Points and of course the Overall, basically all of them. Sanchez makes the podium and Sastre is second, will he ever win a Grand Tour?