Well, at least Denis Menchov now knows what it feels like to pull on the final maillot oro in the Vuelta, on the podium in Madrid. Robbed two years ago by Roberto Heras and his bout of ‘alphabet soup’ doping confusion (“Honest … it’s not EPO”), Menchov completed his fairly imperious victory in La Vuelta 2007.

After getting through the past 21 days of pretty much scandal-free suffering in significantly better shape than his rivals, Denis Menchov could enjoy a triumphal parade into the Spanish capital as the sprinters got to strut their stuff. 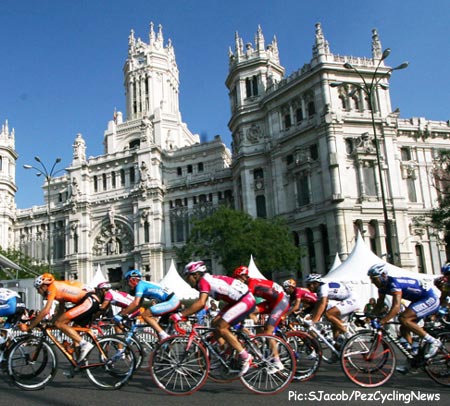 Puffing his chest out in speed-blurred glory this afternoon – for the third time on this Vuelta – was Lampre’s Daniele Bennati. He edged out Alessandro Petacchi on the line after a fairly leisurely stage. So leisurely, that Spanish TV schedules would have been affected so the organisers shortened it by 6kms!

Very little attacking of note, except from Alessandro Vanotti of Liquigas, but all attempts came to nought as Milram and T-Mobile took charge of the closing kilometres.

Erik Zabel did a huge turn for Petacchi, but Bennati nipped him on the line. The points for the win added to those he picked up in an intermediate sprint won Bennati the points classification, just ahead of Menchov. 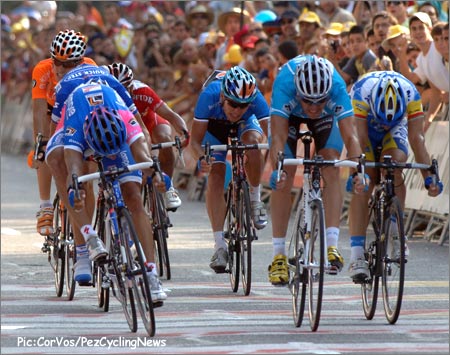 The imperturbable Russian always looked to have the measure of the opposition this year, and was spurred on by the Tour de France fiasco with his erstwhile colleague, Michael Rasmussen, who is definitely not on Menchov’s Christmas card list.

Denis will be getting Chrsitmas cards from his Rabo-boys though – as he shares out his first place winnings along with the cash hoovered up for the mountains and combination classifications – a nice little bonus for Moerenhout, Posthuma, Ardila, Eltink, De Maar, Langeveld and Horrillo.

Add that to Friere’s three stage wins, and it’s a very profitable Vuelta for the Dutch squad. After the finish, Menchov hinted that his ambitions now lie firmly fixed on July next year, as he reckons the Tour is a real possibility.

After all, who knows what will happen to Contador, and Di Luca probably isn’t going to be too interested in France … how many other teams can boast a guy who knows what it’s like to top the podium of a Grand Tour? 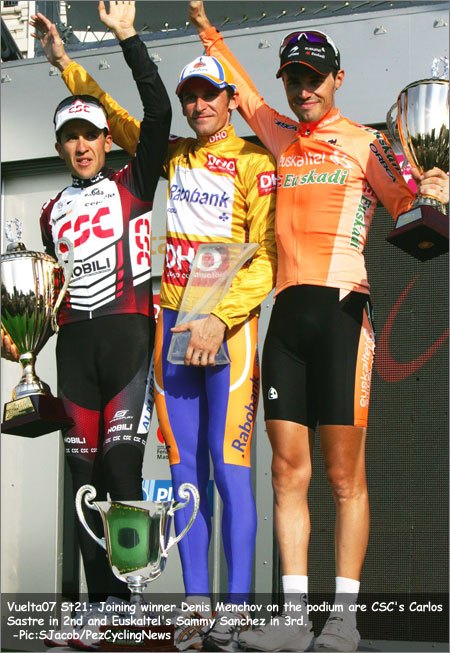 Thanks for following the ride with Pez … but there’s plenty more to come next week. Post-Vuelta fall-out, gossip, speculation and hard facts are all on the way. And then there’s that little beer festival in Stuttgart called the World Road Race Championships.