Today is the last chance saloon for the sprinters and for Oscar Freire to hold on to the Gold Jersey, why? Well tomorrow the race goes up to the Lagos de Covadonga and if you have not got your climbing legs with you its going to be one a hard, hard day! That’s tomorrow; today is an undulating course that should suit Oscar again and some others if they can stay upright!

From the start in Viveiro there is a steady climb of the Alto Santo Andre de Bolimente (2nd Cat), then three 3rd Cat climbs, the last one the Alto de Bobia comes over 30 kilometers from the finish, so shouldn’t cause too much problems for the fast men, the finish dose have a slight rise to the line so could be good for either Friere, Bettini or first stage winner Bennati.

If today was lumpy, tomorrow is downright, um, mountainous? Trying for funny…failing miserably.

An early break went away on the first climb, they were looking for some mountain points, mountains leader and local hero, Serafin Martinez (Karpin-Galicia) was with Angel Vallejo (Relax) and well known climber David De La Fuente (Saunier Duval). Martinez was very keen on holding his mountains jersey at least until they leave his homeland of Galicia, this he did as the race entered the Principado de Asturias after 70 kilometers of the stage and it looks like he will hold the lead at least over night, but tomorrow? mmmm maybe not!

With 90 kilometers to the finish in Luarca the three had a comfortable lead of just over 3 minutes, the main bunch behind were not worried, just keeping them catch able into a strong sea breeze which unluckily its head on, or as Ed Hood would say “it’s hitting them right in the Puss!” 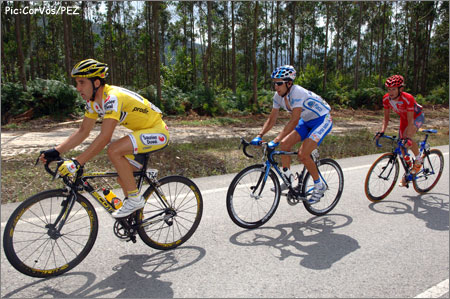 This area is famous for its shellfish and in every bay you can see the Mussel growing beds also octopus and squid are very popular, but the specialties are Percebies and Anguila’s, Percebies are a shell fish, like a barnacle, but long and thin, Anguilas are eels, very long and thin, they look like bits of string, cooked in olive oil and lots of garlic. As we get into Asturias we enter Cidra (cider) country, you drink it from low, wide glasses and it is poured from a great height to give it natural air, all very nice.

Back to the race and the riders have gone through the feed, just the usual for them. The cameras are looking at Castaсo of Karpin-Galicia as he is riding very cautiously as yesterday he had to have a dislocated shoulder put back into position by the race doctor at the road side; I bet he said something stronger than “ouch!”

Rabobank are controlling things as they should, not do too much, but keeping the pace high enough to discourage any moves. This year we have the pulse readouts from Polar, and as Pedro Horillo talks to his boss Friere, his pulse is at 80% of his max, which is 198bpm, interesting. 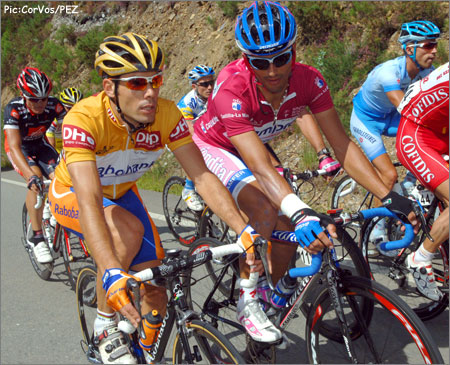 Freire might have been irritated with Bettini at the finish, but he’s still got a stage win and the leader’s jersey heading to the Covadonga tomorrow.

This morning’s interviews are with Koldo Fernandez (Euskaltel), he blames Bennati for the crash yesterday. A miserable Petacchi (Milram) says there was too many people going for the sprint and that’s what caused the problems. A happy Bettini (Quick-Step) thinks it was a dangerous run-in to the finish, but he was laughing about it, so it couldn’t have been that bad. The run-in today is worse, after crossing the river they do a sharp left, then right, following the river as it twists up to a hairpin bend at the last kilometer, but fairly straight from there, except for the left hander off the circuit for the 300 meters, the road also climbs 60 meters in half a kilometer to the last K, the riders get a look at it on their lap through, but this probably wont help much. So it will be a strong man who wins today. Raimond Dietzen the Gerolsteiner DS being interviewed from his team car, reckons his man, Schumacher, has a good chance today.

The leaders have a gap of under 2 minutes as the race enters the last 50 kilometers as Quick-Step take over the bunch work on the last climb, putting a few out of the back (Petacchi) in the process, things don’t look good for the three away as their team cars give them there last drink of the day and then have to stop and wait for the bunch to pass.

Quick-Step look to be working for a Bettini win, the circuit should suit the smaller, acrobatic rider like Bettini, not the power sprinters like Petacchi and Boonen, perfect for McEwan, but as we know his team left him at home.

Over the last climb Vallejo takes it from De la Fuente, Martinez had been dropped a little earlier on the climb, Euskaltel are now on the front, maybe just staying out of trouble, but they must have a plan as seven of them are riding hard and the TV motorbike is having a hard time staying in front on the fast decent. The bunch has split with a front group of around 60, second group of 30 or 40 and the others making the most of a bad job to get back together. In the front group Haimar Zubeldia (Euskaltel) hits a road cone at the 20 kms to go banner and comes down hard, he gets a new bike, but it looks bad, collar bone maybe, he starts to ride, but he will never see the front of the race again as they have the hammer down to maintain the gaps. 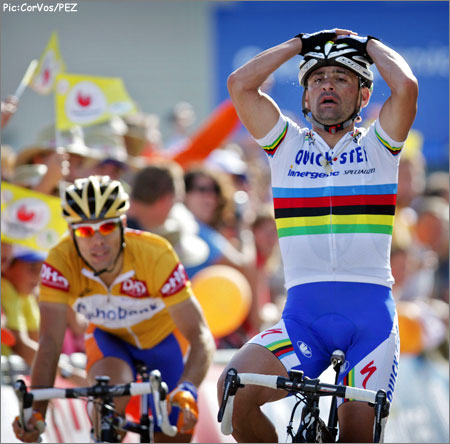 With the crash to Zubeldia his Euskaltel team have pulled off the front and Quick-Step have taken over again as they pass a light house right out on the rocky coast line, beautiful views, but the riders are mostly looking at the wheel they are trying to follow!

As news comes through that Zubeldia has a broken collar bone and has climbed into the ambulance, the groups are closing up as Quick-Step still have the bit between the teeth and are powering along into the last three kilometers and the tricky finish circuit.

Pereiro, Schumacher, Friere, Bettini and Evans are all near the front as there are more crashes at the back, Allan Davis (Disco) leads out with Bettini, Rebellin and Friere on his wheel, Bettini jumped round the Australian and blocked Friere (slightly) and took the well planned win. Friere keeps the Gold jersey and gets to wear a silly Asturian hat and the points jersey.

A very happy Bettini said all the usual stuff, his team where great, he loves riding the Vuelta and it is very important training for the World Champs and his moral, so nothing new from a winner then.

Tomorrow is going to be tough; Covadonga has had past winners of the pedigree of Marino Lejarreta, Perico Degado and Lucho Herrera. So stay tuned to PEZ for the excitement.