In Vigo for the start of La Vuelta there was a great relaxed feeling at the race and lots of food, but today in Algemesi things were back to normal, traffic stress, pushing and shoving for photos and worse still – no food. But I did get interviewed for TV!

Speak right into the microphone… don’t be shy… 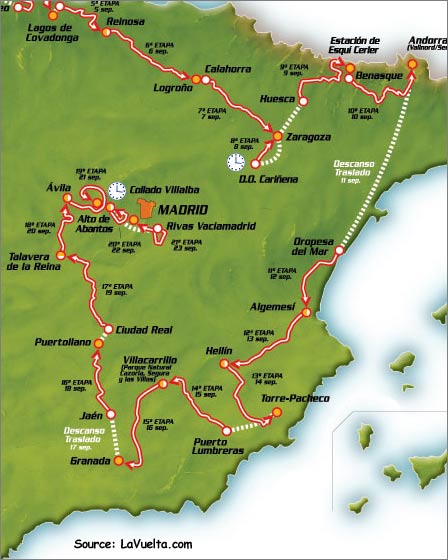 Today’s stage 11 ran down the east coast from Oropesa to Algemesi.

Here I am in Algemesi, not far from the City of Valencia, again I have missed lunch, this time it was a special Paella for the press, they were eating it while was sat in a traffic jam because I wanted to see what the last kilometer looked like, today was going to the sprinters, for sure. The last five kilometers are flat and flat, but with quite a few roundabouts, oops, sorry some of them were glorietas as they had statues and other ornamentation. The most worrying aspect of the run-in is the street furniture and the speed ramps, it was going to be interesting.

The Spanish press employs a lot of blond women.

The Work Place
The Press room today is the local sports centre, one big basketball hall, with as much atmosphere as a funeral parlor! So I thought, until I am accosted by a TV crew who want to interview a member of the International Press, there was no escape, I was the only one there, so that was it, the longest 5 minutes of my life. At least when I was married in Spanish I had a rough idea what was going to happen, but a TV interview in Spanish had a certain part of my lower anatomy twitching.

Very inane questions, am I tired following La Vuelta around? You work for a Canadian web-site; do Canadians know anything about La Vuelta? Are they interested? Who do I think will win? Etc….Thank god it wasn’t live!

It’s set on flat land with mountain behind and the sea in the distance, to get there you pass the town of Cullera, it likes to be seen, so they have the town name in enormous letters on the hillside above the town and of course they have had it repainted for today.

Nothing for the stragglers here…

This is rice growing country, wet lands all around and this is where Paella was invented, but none for me today. Algemesi is also famous for its rectangular shaped bullring, normally they’re round. I’m hungry so I need to go to the finish area to see what the VIP area has to offer.

At The Finish
Well, nothing on offer, not for me anyway – nothing worse than a hungry Journo/photographer, not to worry though… lots to look at.

Bumped into one of the Saunier Duval girls, cleaning the van! So it’s not all handing out T shirts and looking pretty. She cheered up a bit when the TV crew that interviewed me earlier began asking her some interesting things…?

I was given the lowdown on the local Mayor, he’s new in the job, there’s lots of new building going on and he owns four building companies. Turns out the previous Mayor didn’t take a wage for his work, but the first thing the new man does is give himself the biggest pay check that any Spanish Mayor in a town of this size gets, nice work!

Alessandro, the PR man for the Quick-Step team was there at the finish, I thanked him for the photo of Peter Van Petegem drinking a Leffe at his last race, Alessandro pointed out “Peter will be able to drink more now that he has retired”. I said he used to down a few during his career, Alessandro had to agree, with a knowing smile.

The race was unfolding slowly as two hopefuls were being pulled back very slowly, you could see Milram wanted the win today by the amount of work they were doing, so it was no surprise when Petacchi and Zabel hove into view with Bettini close by, nice win for the big guy, who had a smile on his face for a change.

Talking of big guys, Magnus Backstedt was asking for Ed Hood again and Eros Poli, who now works for Polar pulse monitors still looks fit as I saw him later with a poor kid from Polar giving a good half wheeling.

Alistair’s old chauffeur Mauri, and Fabian Jeker, await the Lemans style start to escape the press carpark after the stage.

Mauri, my chauffeur in Vigo was with my near neighbor, Fabian Jeker and that man who used to be at all the races with Festina. There was time to see the podium presentation and it was back to the traffic jams until I got “on the wheel” of Fabian who was driving one of the VIP cars, best not say too much, but a word of advice: never try a car race against an Ex Pro, we flew down that Autopista, doing turns on the front, I’m just waiting for the speeding fine to come through the post.

It’s all fun and I hope more tomorrow!