Vuelta’07: Hellin By The Back Door

What a day! Lots of driving, a bit more food, lots of scenery and lots of people watching a bike race. Mr. Petacchi took another great stage win with a big sprint, a happy man again. The most surprising thing was that I was surprised about being surprised, you’re confused! Well let me explain…

Today wasn’t so much by the back door, as by the side door, because I drove to about the middle of the stage and then on the course from Ontinyent to the finish in Hellin, Ontinyent gets today’s worst traffic jam, of this I will explain later. Lots of mountains and then valley roads with flat views across plains of vines and olive trees, very pleasant. Then I saw what looked like a western cowboy scene, very odd, mind you they did film some of the spaghetti westerns round here.

You’re wondering when I am going to explain my surprises, well here goes; it’s all a personal thing remember. The first surprise was in the traffic jam in Ontinyent, I also managed to get lost, so I ask a policeman. I have lived here quite a while now and I am still surprised when a policeman or Guardia Civil salutes you when you approach him. 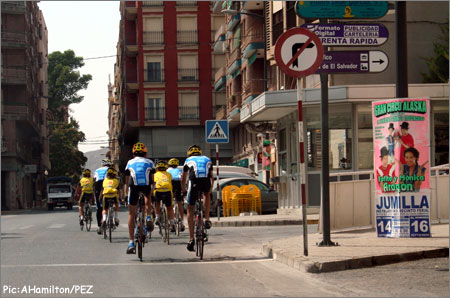 The local kids were out on bikes…school? You gotta be kidding me.

This policeman must have been in his 60’s, anyway he smartly saluted me and made me feel stupid by pointing to the Vuelta Direction sign he was standing next to, but I was suitably impressed. 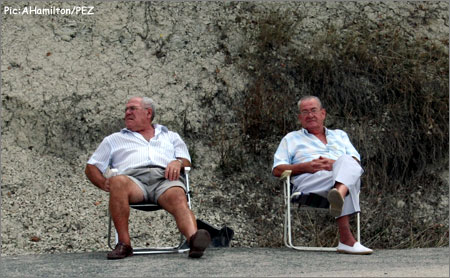 That’s the way to do it. Perfect.

My second surprise was the feeling of excitement when driving in a race; I turned onto the course and got goose flesh down my arms, so there is hope for the old cynic yet, PEZ! My third surprise was the amount of people watching today’s stage. It wasn’t going to be a wonderful, exciting stage and there aren’t many people in these ‘er hills, but all over the place there were little groups of bike fans, eating, drinking and having fun. 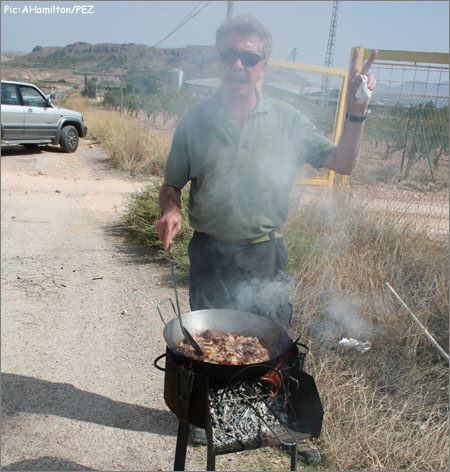 Got enough for me? 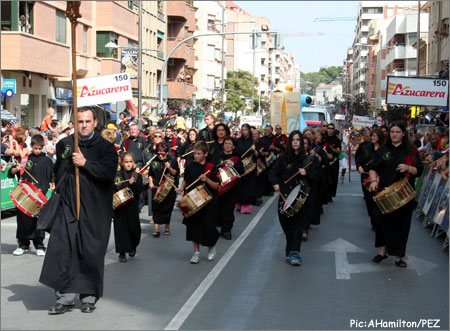 There were even parades ahead of the finish today.

La Vuelta isn’t like the Tour de France, it’s not run during holiday, so the people are at work, well at least they should be! Everyone shuts shop, closes factory, stops school and comes out to watch, any excuse for an afternoon off, great fun. Two old men had set up their deck chairs, not strange you say, well this was over two hours before the peloton was due. Another group had the wine, olives and crisps set out on the table. 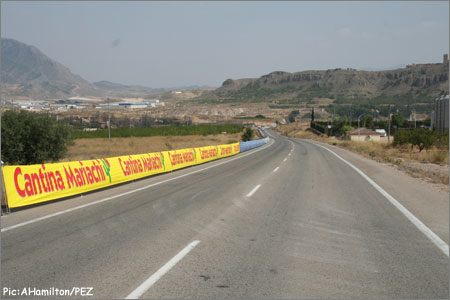 10k to go – this is about where the field really started to bear down on the break. 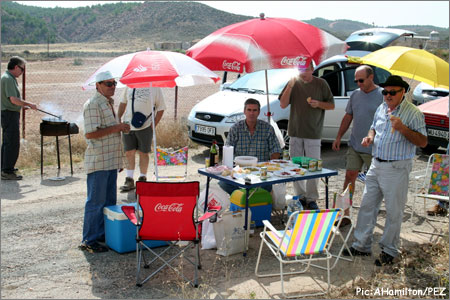 More importantly, this is about where the good grillin action was.

The best had to be the group at 10 kilometers to go (that’s where the banners start), they had it all, wine, beer, cheese, sausage, olives and a big pan of? What is that? Conejo (rabbit) in olive oil and lots of garlic, a feast! These guys are bike mad, they don’t ride, but they love to watch. 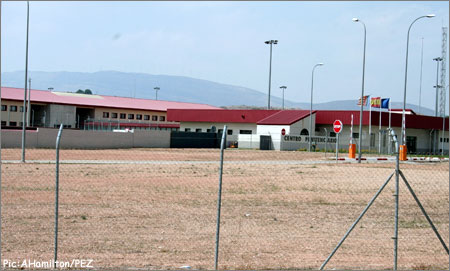 Can you see the race from the prison cells?

The next place I came across was a prison, the guards were out to watch the race, but I got the feeling the inmates would be lucky if the window of their cell pointed towards the road, maybe they had TV’s? The feed area was just round the corner, the masseurs had it all set up, musettes, bottles etc. 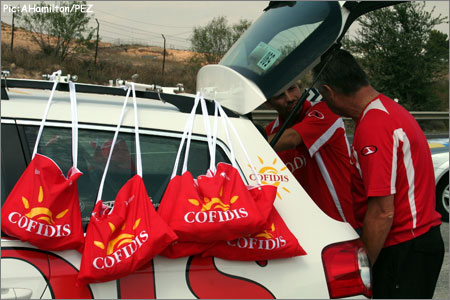 All ready for a mobile lunch.

The CSC masseur was for sure the coolest, he was on page 371 of a Robert Ludlum book and said if he got some peace he would finish it by the end of the Vuelta, OK we’ll leave him to it. 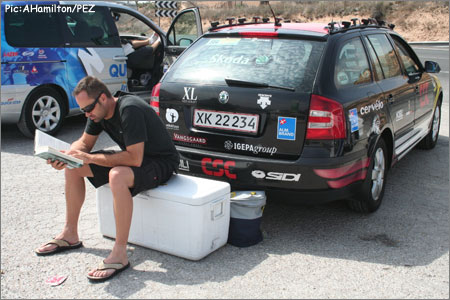 If all these people would quit bothering me, I might be able to finish my book!

Down to the finish and I had that feeling again, the one you get when the police wave you through or they lift barriers out of the way so you can go where no one else dares to drive. Problem was, they sent me where I didn’t want to go, so I walked to the finish line. Seeing all the girls and all the food that wasn’t for me, again! All the things that I can look at, but can’t touch. 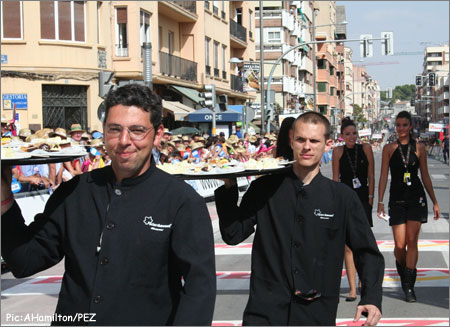 Mmm that looks good, think you can spare some?

I managed to congratulate Eros Poli on his form as I had seen him give a poor guy a hard time on the bike yesterday, he said “you should have seen me last year, I was 14 kilos over weight, but it’s nearly all gone”. Apart from working for Polar he is setting up bike holidays in the Venice region of north east Italy, good luck. 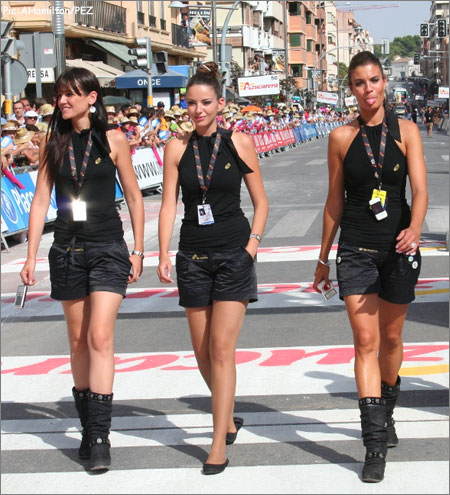 Oh my, well hello there.

It was time for the rugby scrum of photographers at the finish to catch Peta taking another stage win and the problem of finding my car. There was a drum band in the street and I couldn’t get the car out without killing them. The drive today was very calm compared to yesterday, I only had Caisse d’Epargne to follow, but jumped on the faster wheel of the Karpin-Galicia team cars, maybe no speeding fine today, I hope! 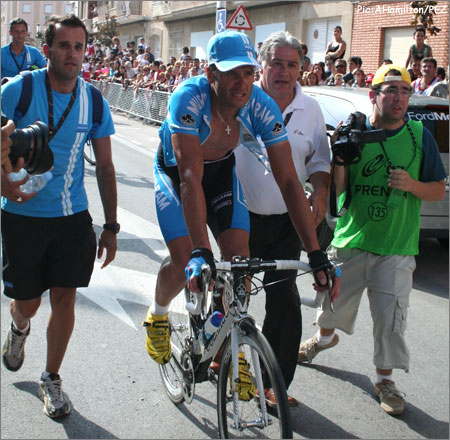 BritTour07 Inside: Down But Not Out