Today we go to Andorra, the last climb to Arcalis is 2,200 meters altitude and has steep slopes on its 15 kilometer length, and before we get there the riders have to cross two 2nd cat and one 1st cat climbs. 214 kilometers of pure torture, the stage is set for quite a performance!

Sunday we saw the result of youthful exuberance being out done by experience, Devolder “shot his bolt” in the time trial on Saturday and paid for it on Sunday, had he eased up near the end of the time trial, like Menchov did, he might have had the energy to save his leader’s jersey, but that’s all history now.

A big group managed to build up a gap of over four minutes by the 1st cat climb of the Puerto del Cantу with 80 kilometers to the finish. Amongst the leaders were Bettini (Quick-Step), Cunego (Lampre), Marchante (Saunier Duval), Vande Velde (CSC) and that old mountain goat; Guerini (T-Mobile), remember him and the photographer on L’Alpe d’Huez?. Oscar Freire (Rabobank) will not be seen on the podium later to be presented with the points jersey as he has decided to go home and prepare for the World Championships. 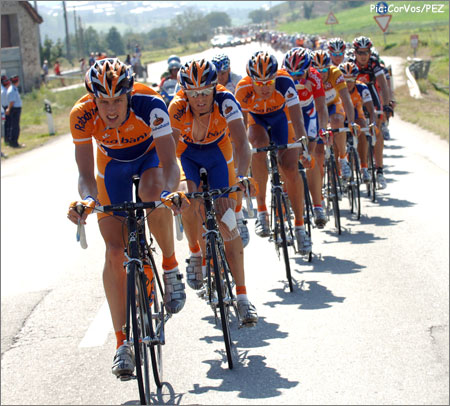 It was all Rabo all the time…kinda like the Tour. Hopefully this comes to a better end than the Tour did for Rabobank.

If you have never been to Andorra (northeast corner of Spain), it’s a great ski resort, but probably more famous for its tax free shopping, cars, electrical goods, cigarettes and alcohol, all at very cheap prices, the team buses will be a lot heavier on the way out of Andorra tomorrow!

As the riders enter Andorra, with 40 kilometers to the finish at Arcalis, the group has been pulled back to three and a half minutes advantage on the Rabobank led bunch. In 1974 when the Vuelta came up here it was with deep snow at the side of the road, when we were here in 2005 the lead group was Heras, Menchov and the winner that day Mancebo. Menchov was in the leaders jersey that year also, but he was to lose it to Heras before Madrid, then sort of get it back months later when Heras had a little problem with an analysis. 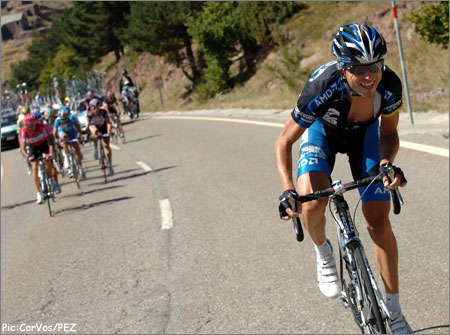 Jurgen Van Goolen gave it a solid dig today out of the break.

Back to the race – we have 18 riders with a lead of three and a half minutes as they come through the town of Andorra La Vella, the Capital of this Principality. Damiano Cunego looks to be doing most of the driving; we haven’t seen much of him since his crash on stage one, maybe “The Little Prince” is going to do something in the Principality?

Van Goolen (Discovery) wants to get on with things and is setting the pace on the early slopes of this 15 kilometer final climb. Sastre’s CSC team has started to chase behind, so Vandevelde is not their choice for the win today. Bad luck for Van Goolen as he punctures on a tricky bit of road, even though he gets a fast wheel change from the Shimano neutral service car, it’s going to be hard for him to get back up to the break.

The rider here with the most to gain is Josй Angel Gomez Marchante (Saunier Duval-Prodir), who is at 12:40 overall, although Van Goolen is only 9:15 behind on overall, but he hasn’t made it back to the leaders, yet.

The End is Nigh!
The lead group starts to splinter with 20 kilometers to the line, they now only have one and a half minutes in hand and the writing is on the wall. Paolo Bettini has been dropped under the impetus of Xabier Zandio (Caisse d’Epargne) who is leading the group as Van Goolen rejoins.

In the main CSC lead bunch, Karpets can be seen riding a plain carbon frame, no Pinarello stickers, must be a prototype. Van Goolen has had enough and attacks the leaders and is joined by Ludo Turpin (Ag2r) as the others seem to have given up all hope and drift back to the menacing bunch which is only 48 seconds behind with 10 kilometers to go. 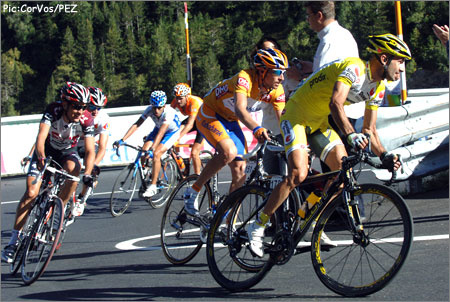 Piepoli was once again a climbing machine…would you expect anything less?

As the road starts to twist and get very steep, 8.5% in places, yesterday’s winner, Piepoli moves forward as does the leader, Menchov. CSC is still doing the chasing – mostly by Gustov and the caught Vandevelde, Sastre, Menchov, Efimkin all look safe.

First big attack comes from “Triki” Beltran of Liquigas, he soon makes it across to Van Goolen and Turpin, no one seems to be too keen to chase as it looks like Sastre is in trouble at the back. Piepoli takes the race by the scruff of the neck as he tries to get over to Beltran who has dropped Van Goolen and Turpin. Anyone who has any hopes in this race now has to be with Piepoli, Sastre was bluffing before and now is on the front blasting the others, All the stars are now out to play, Sastre, Menchov, Piepoli, Efimkin, Evans and the caught Beltran, Samuel Sanchez is trying to get back up to them, but Carlos Sastre wants this one and attacks again which does not help Sanchez (Euskaltel). 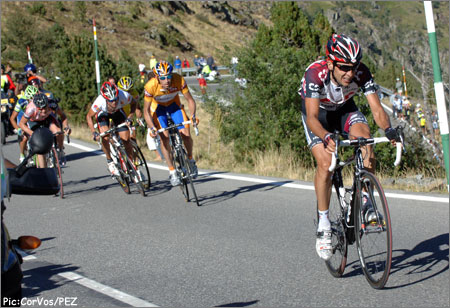 As Sanchez does an impersonation of a yo-yo behind the group, his team mate, Igor Anton, gets across and immediately attacks under the last kilometer banner, he is not strong enough for it to work and so we have eight riders together up the steep finish, Menchov knows this finish well and starts to sprint with 100 meters and no one can get past him.

Today the cream came to the top, these eight riders are the tops and Menchov looks to be the strongest and the smartest here, remember he has done this before, virtual Vuelta winner in 2005, if you like a bet, put your money on anyone else, but I think you will lose! 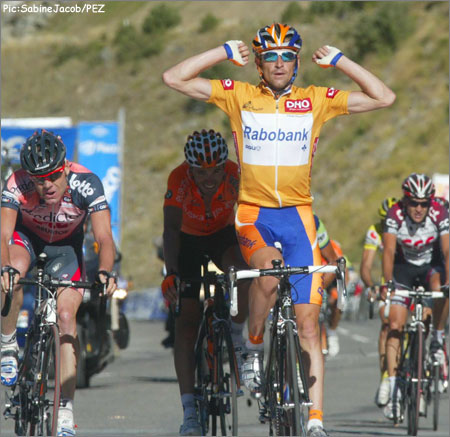 Halfway done with this year’s Vuelta and Denis Menchov is in a commanding position.

Menchov, was Piepoli working for you today? “No, no I rode my own race, I didn’t talk to him.” OK we believe you!

From Saunier Duval-Prodir: Leonardo Piepoli: ”I thought I could score my second straight win. I tried to set a strong pace because I felt better than yesterday, but I didnґt turn out as Iґd expected in the end. I learnt Sastre said something about my tactics being shameful, but letґs believe he spoke in the heat of the moment. To be honest, I was the only rider launching attacks till the very end. Here we all try to play our game. About the KOM jersey? Well, it would be nice to get it, crowning a season when I clinched victories in the Giro and the Vuelta, but itґs difficult and I prefer to take one day at a time.”

It’s a rest day tomorrow, but stay tuned to PEZ for all the action to come.