The first rest day is in the books and now it’s back to work for our heroic pedal mashers in Spain. It was a long, windy day on the road capped off with the expected field sprint finish. Textbook might be a good word to describe Milram’s finale today…read on!

Two adventuresome souls made up the day’s escape and surprisingly, they came from two of the three Wild Card teams. We haven’t seen any of the Wild Card teams in breaks so far…wait. Actually, I think every single break so far has contained at least one of the three teams, if not two of the three, and on one occasion – all three in a three-up break. Anyhow, our convicts for the day were Raul Garcнa de Mateo (Relax-GAM) and Josй Antonio Lуpez (Andalucia-Cayasur). They rode out front all by their lonesome for innumerable kilometers, miles, feet, meters, you name the measurement, they were covering it in heaps.

Of course, teams interested in a sprint did their job on the front, but of course Rabobank did their duty on the front first, because apparently it’s your job as race leading team to ride on the front for at least a few hours and let the gap widen out nicely, just to give some extra work to the teams looking for a bunch sprint. 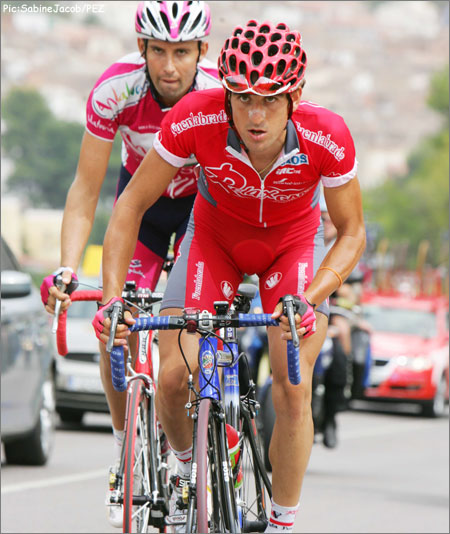 An amazing thing happened today though: the gap ballooned, steadied, and then came down, down, down. I’ve never seen anything like it. Ok, Bla bla bla, fast forward to the finish!

The break was finally reeled in inside 10k to go (oh the drama!) For some reason, T-Mobile decided that today would be their day to take the race by the cajones and do a classic Saeco lead-out. They ramped the pace up a good ways out and had the whole field lined out front to back, slobbering on their collective stems. It was a spectacular sight as the cameras panned to the rear of the field and riders continually fell off the rocket ship headed by T-Mobile. I can’t even imagine the speed required to see big time professional bike racers tailed off in a flat run-in to the finish. That has to be a great feeling, getting ridden off the wheel in front of you on a flat road with no crosswind to speak of. 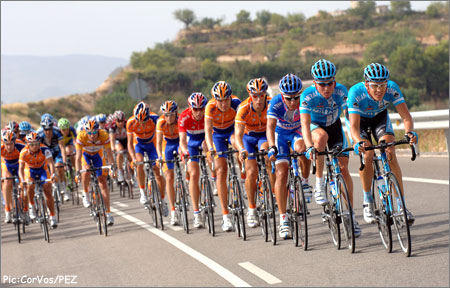 T-Mobile put on a real show at the front as they drilled and drilled and turned the screws tighter and tighter. There were attempts to come over T-Mobile, but they were raging, it was impressive, and then suddenly abysmal. The lead-out completely fell apart with 3k to go. Seriously, they went from warp nine to gone, and in retrospect it appears they might have gone a wee bit early, perhaps about 3000m too early. It was almost comical to watch the front go from all T-Mob pink (with a little Disco and QS mixed in) to nary a pink jersey in sight within the span of 30 seconds…and then turn entirely baby blue Milram. 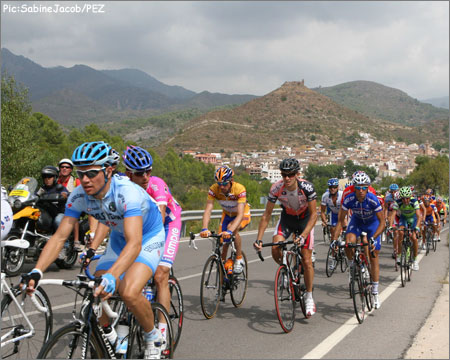 Inside 3k to go, Milram came over the top of the other teams and made the sprint their own. A number of riders and squads tried to get the better of the Milk Boys. A few souls tried to fight Petacchi for the last spot on the train, but there would be no stealing onto HIS train. This was Milram’s day and there would be nothing to disrupt this freight train of destiny with an Ale-Jet waiting on the end. 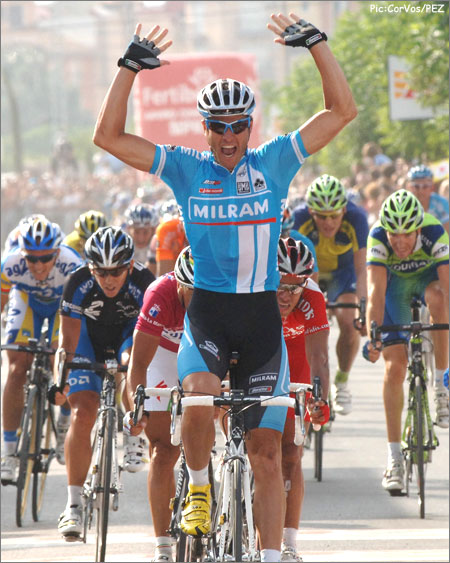 There was a certain fear though: could he actually pull it off? This lead-out was so good, it was unfathomable, it was utterly perfect. When you look up leadout on Wikipedia later, this one should be in the description. Which is why it was so nerve wracking as Petacchi opened the sprint up – would he pull it off? Please let him pull it off, oh no, someone is going to come around him, this is going to be depressing.

No one did though, not even close. Petacchi came through with the legs and Zabel held on for 3rd.

It was an absolutely textbook effort by Milram – everything slid into place perfectly. Importantly, it seems something has been learned – start the lead-out later. What real motivation does a team have to start early now? Why go early when you can kill it late and stack the front with riders on skeleton steeds headed hell bent for the gates of Hades?

The finale was all Milram, all the time, and I honestly can’t say it enough just how beautiful the display of hard-nosed speed the milk boys managed today. It was one of those rare times when Zabel and Petacchi got the chance to do what they were put together to do – be an invincible sprinting duo. Petacchi was jubilant, and the normally stoic Zabel was nearly beside himself. There’s no rivalry between the two – how could there be? Something that perfect, executed that cleanly, there can only be smiles and hugs afterwards. Perfection.

Remember when Petacchi and Zabel were first paired together last year? There was so much talk of rivalry and how it would never work. I pretty much agreed. Petacchi was at the height of his powers, nearly invincible, while Zabel was beginning to come good again. How could this ever work? 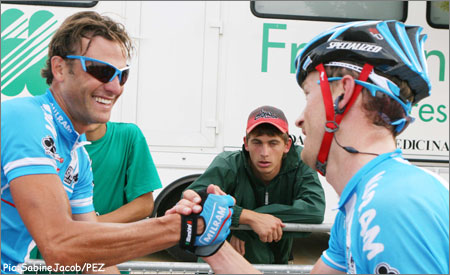 Then something peculiar happened – Petacchi busted his knee and had a miserable campaign of it the rest of the year. Zabel fared reasonably, but nothing too dramatic (save for Worlds), and suddenly this supposedly superpower over-achieving duo was suddenly old news, burnt toast if you will. They had some good finishes here and there, but nothing really TOGETHER. Zabel is always good, Petacchi of course, but the two together have normally been under achievers – one upped by someone all the time.

Petacchi seems human now. Sure he won a ton of Giro stages (remember that first one this year when he nearly burst into tears over the line?), but there’s something different about Ale-Jet when he wins now – he seems genuinely happy, overjoyed in fact. It’s not expected anymore, it’s not a done deal before he even sprints, it’s an accomplishment, the fruit of patience and hard work – and that has made him all the more endearing to the public, at least to me (I reckon I can’t speak for everyone). So when Zabel and Petacchi finally link up to form that elusive super-duo, and then win – it’s an absolutely beautiful sight. 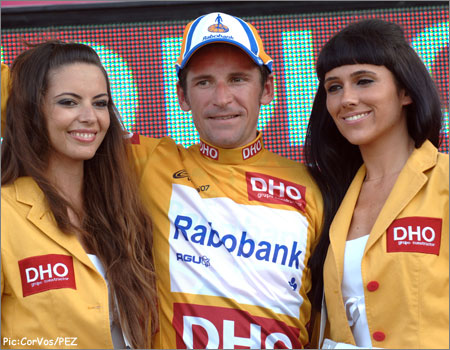 Petacchi crosses the line and looks like he could literally jump out of his skin in joy and Zabel joins in as well. How can you not love that?

So when you turn back to your work and the rest of your day, take a smile with you, because that was something to behold.

PEZ-Talk: McCallum At The Tour Of Britain