Suddenly things are going alright for the boys in blue … Alessandro Petacchi moves onto 19 career stage wins in the Vuelta and goes some way to erasing the misery of the last 18 months – injuries, loss of form, “drug busts”. How’d he do it? Like this …

Milram once again produced a super effort to position their man just right going into the final kilometre. Round the bend safely at one kilometre to go, and Lampre’s Daniele Bennati was moving up, but Zabel had things under control.

Zabel led things out on the right, with Bennati on his wheel, but Petacchi – confidence restored – erupted out of the middle, flew by Bennati and took the sprint easily. Nearly a bike length in it at the end, as Benna’ seemed to ease off when he realised he was beaten. 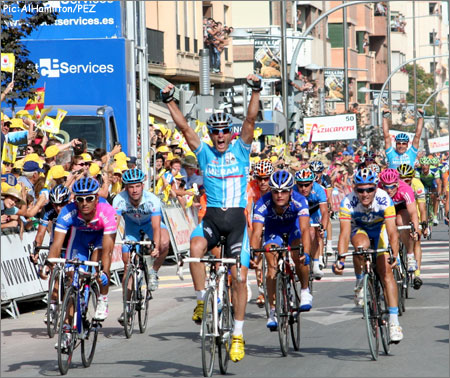 When Petacchi is in this sort of form and mood, there really isn’t anything the guys in the Vuelta this year can do to stop him … maybe if Freire was still around, it might be different but you can only beat the guys that are in the race.

Our famous five breakaway riders for today were the dopers’ nemesis Philippe Gilbert (Franзaise Des Jeux) going for a long one today after coming up short in recent sprints. He was joined by Yuriy Krivtsov (Ag2r Prйvoyance) and Sйbastien Minard from Cofidis. Along for the ride also was Davide Rebellin (Gerolsteiner) getting in some handy training for the Worlds. Josй Ruiz of the Andalucia-Cayasur squad made up the quintet. 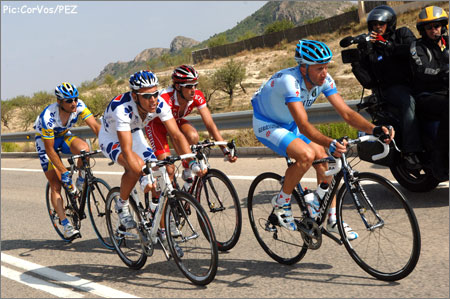 They went early, not long after the 10 kms mark on another (surprise, surprise) hot sunny day. They got up to over 4 minutes clear, but after the resumption of the Alessandro Petacchi flight service yesterday, Milram came to the front to keep things tight. 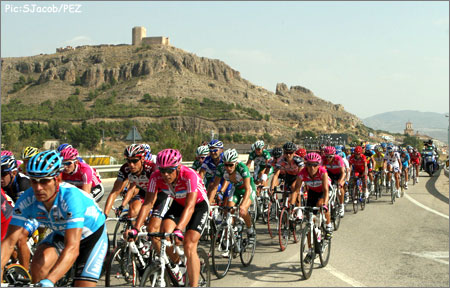 The pace was absolutely brutal as the escapees tried to hold off the peloton, which was flying behind them. The usual suspects – Muller and Terpstra for Milram – to the fore. 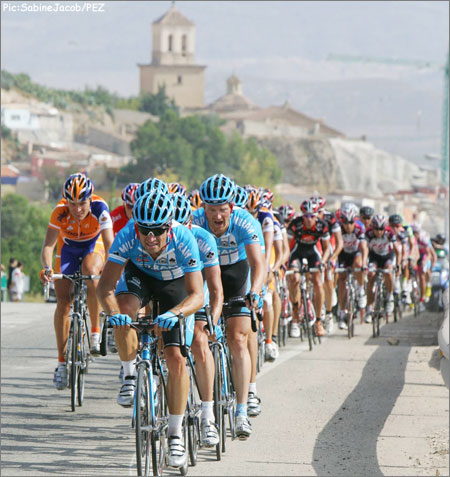 The speed saw Ruiz shelled from the lead group with 30 kms to go – his erstwhile companions just got onto the job at hand, without seeming to miss him too much.

T-Mobile, Lampre and Credit Agricole all came to the front to help out Milram as the gap wore away …. 40 seconds, 25 seconds, 20 seconds, 14 seconds ….. still the breakaway gave it everything. 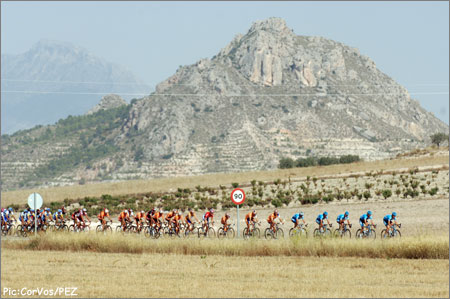 7 seconds was all they had as they sped under the 6kms to go banner. Then Gilbert jumped, chased by Rebellin – Krivtsov and Minard burnt off immediately. The Aussie Adam Hansen was motoring on the front for T-Mobile, as Rebellin played poker by refusing to help Gilbert. It worked/failed, depending on your point of view, as they were caught more or less immediately!

T-Mobile were barreling along at 55kms/h – the used up and spat out Milram guys drifted off the back and into the illustrious company of Tom Boonen, not on a good day.

The front of the peloton started to go all kaleidoscopic as the Milram jerseys disappeared to be replaced a Lampre/T-Mobile/Cofidis/Discovery/Ag2r/Big Magnus mix. 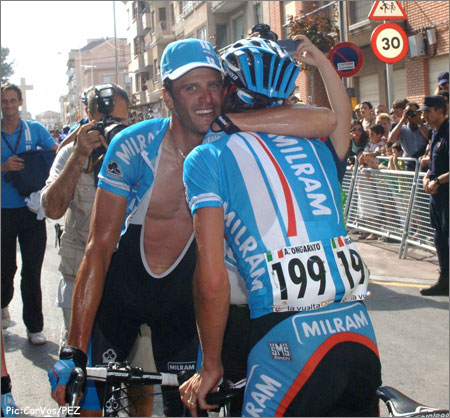 However, the two Milram jerseys that count at the business end of the race – Zabel and Petacchi – appeared just when required to nail the win.

Very sadly, we lost Leonardo Piepoli today – he’s flown home to his wife’s bedside, after she suffered complications in childbirth. Everyone associated with Pez sends their very best wishes for a speedy recovery. The team released this statement:
”I feel so sorry about this; I didnґt want to quit the Vuelta, but I have to be by my wifeґs side, Leonardo told the media before boarding his plane. There are moments in life when you just have to be there. Itґs my duty as a husband and father. Anyway, I wouldnґt have been able to stay focused during the race, with my head in the hospital. I think the situation is under control now. Her doctor said everything was fine, that I could stay in the Vuelta, but I wanted to be by her side, giving her the support she needs. Looking at it from the sports point of view, it was a hard decision. Although my initial goal of scoring one stage win had been achieved, I was wearing the KOM jersey, and itґd have been nice, both for me and for the team, to take it home.” 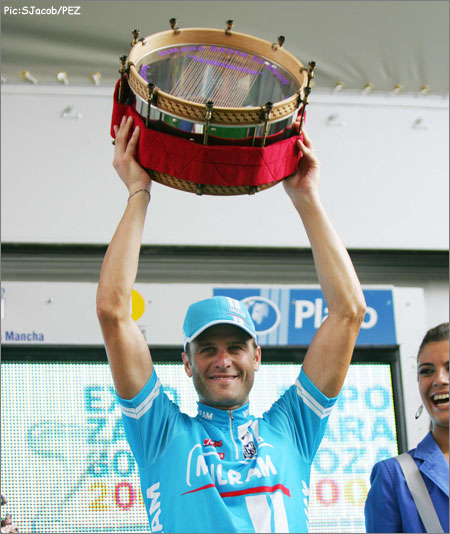 We’ll be back on what looks like another Petacchi-type day tomorrow, so keep it Pez for all the thrills – hopefully without any spills!

Vuelta’07: Hellin By The Back Door