On tap in today’s stage of the 2007 Vuelta, we had a 161 km roller fest. Not easy, but nothing like La Covadonga, either. But, with 6 days left until Madrid it would stand to reason it would be an opportunist’s stage, and there would be truth to that! The tiny Colombian Leonardo Duque of the Cofidis squad would take top honors after a LONG day out front. It wasn’t all textbook though, read on! 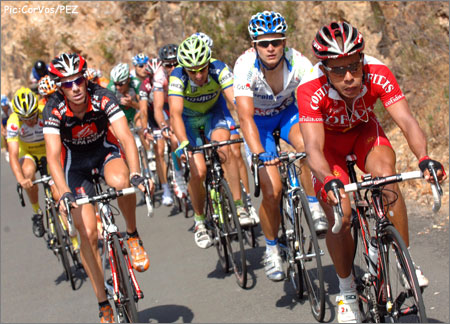 As this behemoth of a break purloined more and more time from the peloton, it was a sleepy and complicit Rabobank that watched them go. With virtually every other opportunist team represented in the break, it was seemingly decreed that this break would be allowed to live. The orange and blue Dutch team closed their bail and set the line at about five and a half minutes.

Does there ever come a point when you just want to quit? Can you imagine riding tempo day after day ad nauseam?

And so it would stay, and the group began to turn on itself with 30km to go. Eduard Vorganov (Karpin-Galicia) made the first sojourn off the front, and rightly so as his team had some numbers in that break. The T-Mobile rider Bert Grabsch decided the kid was worthwhile to follow and closed the gap to him, but the group set the hook and reeled slowly, which prompted the wily David Herrero (Karpin-Galicia) to go next. Clearly the upstart Karpin-Galicia team wanted to show themselves as worthy participants in the 62nd Vuelta. Joan Horrach leapt across too, to represent Caisse d’Epargne, but that was quickly swallowed and countered by the duo of Alexander Kolobnev (CSC), and Leonardo Duque (Cofidis). Then, David Herrero (Karpin-Galicia) made it across, and there were four leaders, who had eked out a precious 15 second lead. The racing was fast and extremely furious, as the four escapees from the escape worked together feverishly to hold off the 15 men charging hard behind them. Splinters of the 15 made harded efforts to bridge, but the quartet was not to be had, as they motored through the Spanish countryside. 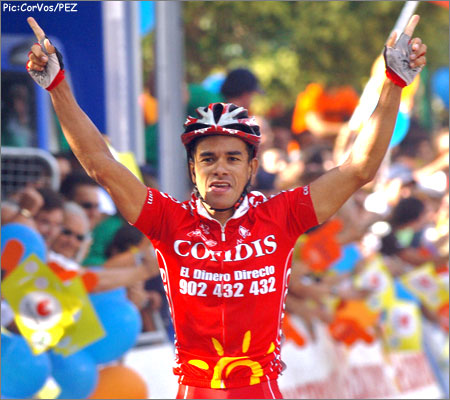 After much attacking out of the break, the finish came down to three men, and Duque was the quickest…because he got to the line first.

Horrach had a dig, but was joined by Duque and Kolobnev. Three up front, scattered blobs of chasers. By this time, the overall gap to the peloton hovered around 8 minutes. Duque had a dig, but Kolobnev reeled. Horrach looked utterly cooked and was not helping, instead hanging onto the Russian’s wheel for dear life. Inside the final k, Kolobnev and Duque chatted a bit, perhaps worried about the lurking Spaniard in tow. Behind, the frenetic chase crept closer. Into the finishing straight, Duque led, and led hard. Kolobnev made his move to come around but it was not to be as the Colombian fired off a wicked bit of power and held off the two with him for the finest win of his professional career! What a thrilling finish! 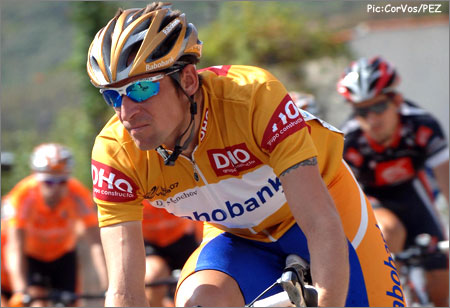 The Vuelta seems all but locked up for Denis Menchov, as his Rabobank team sheparded him across the line some seven minutes later. Barring accident, injury, or illness, the Russian will step atop the podium in rightful fashion this time, and we can bet he’s licking his chops to do so!