The string of successful breaks ended today, and we jumped back into the usual fare of the two-up break (made up of two Wild Cards) that goes far, but not quite far enough. Lampre had bunch sprint on the mind, and that is what they got. It’s a good thing too, because Benna had the legs and then some to take his second stage win of the 2007 Vuelta.

Jorge Garcнa (Relax-GAM) and Juan Olmo (Andalucia-Cayasur) were the two opportunistic capitalists ready to risk a long, hard day abroad for the tiny chance that their investment might yield glory and fortune. They kind of missed the boat though, as today wasn’t the right day for such a bid, the last two days were…

11k into the 175k journey to Talavera de la Reina, the duo exited the painless grasp of the peloton and set out for hours of fun! The peloton yawned, some pulled over and peed, others ate, but worry over these two? Come on. 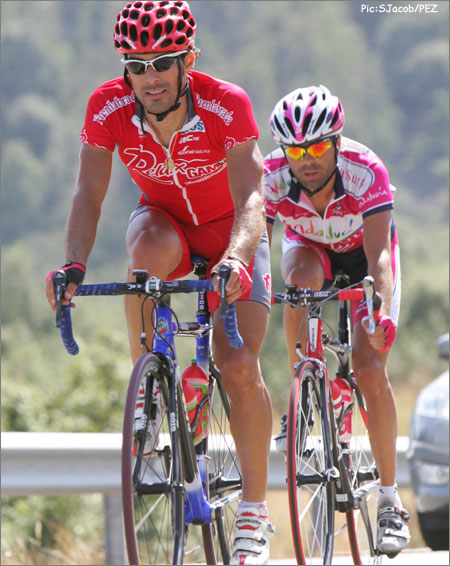 The only real news in the field was the retirement (literally) of Giuseppe Guerini. Guerini, the veteran of many a year on a metal steed, planned to call it quits after the Vuelta, but he couldn’t quite make it that far, falling ill in the last few days and was finally forced to call it a career today. Ciao Giuseppe, all the best in your coming ventures.

On the racing side of things, that was also about the most interesting story, unless you consider tempo-setting by Milram and Lampre a fair sport over two lonely hopefuls. Milram and Lampre were not messing around today either, as the leash they provided never topped the 5 minute mark, and was often much shorter, and when it was time for the break to be done, it was stamped out like some kind of irritable little flame in the middle of a wet meadow. 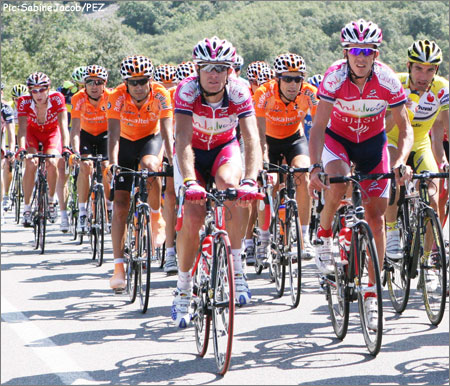 With 9k to go Jorge Garcia puts in a dig for solo glory, but it’s really just one last sad attempt at who knows what…self-loathing? Juan Olmo being the codependent he is digs deep and rejoins his partner…only for the both of them to get caught with 7k to go. Now wasn’t that fun!

Let’s get down to the business of a bunch sprint now, shall we?

Inside 5k to go, Milram has five stooges cranking out a wicked pace. Lampre is jealous, so they add one to the pace-setting…sounds about even. Discovery feels left out and adds one as well, but now there are 6 Milrams, and two ‘others.’ 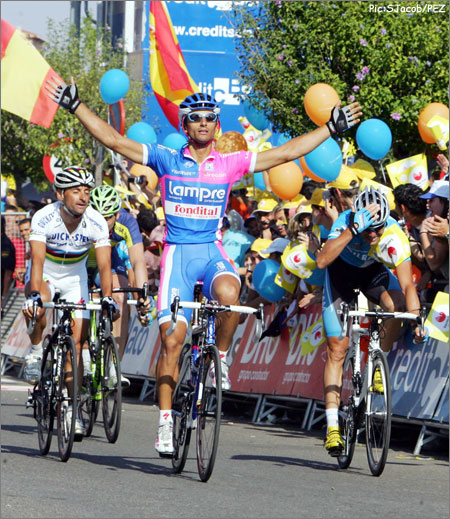 Here we come into the final kilometer and it’s all Milram, four of them in fact. Inside 500 to go, there are still two and it looks all set for Petacchi as Zabel cranks out what should be another race-winning leadout, how could it not be?

Oh wait, there goes Daniele Bennati on the right – he comes right around Petacchi and so does Bettini. Petacchi is shocked, disbelieving and hits himself in the helmet. Bad Petacchi BAD! 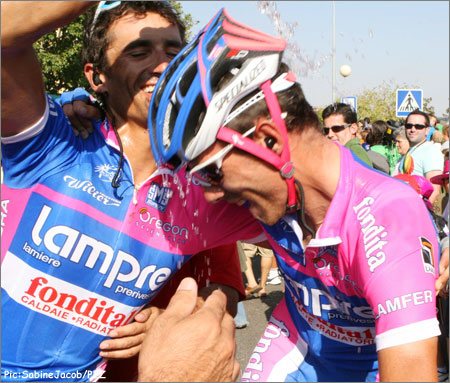 That’s two for Benna, take that Franco Ballerini for snubbing me as a sprinter on this Worlds course with FIVE THOUSAND meters of climbing. I like how this was interpreted as a revenge win for non-selection…what self-respecting sprinter would ever want to partake in a course with upwards of 20,000 feet of climbing? Come on.

Tomorrow’s Stage 18 includes one nice Cat 1 and a Cat 2, but they’re both well before the finish – a break seems a good bet, or if the tempo is controlled, a bunch sprint is also a nice bet. Don’t expect too much to get you out of your seat though. Enjoy the midweek siesta. 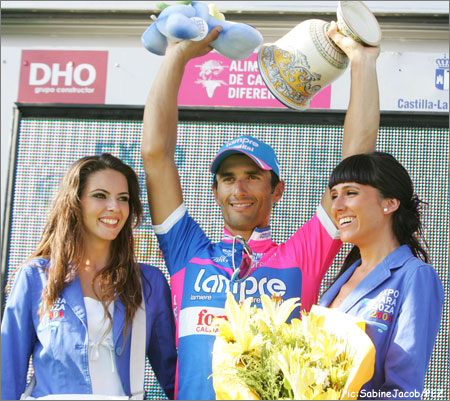 Two stages till the final uphill finish of the Vuelta at the Abantos, and the day after that is the penultimate stage TT – 20 fast kms. Methinks Mr. Menchov has it in the bag.