Sometimes the pro peloton throws one of the older dogs the occasional bone, but today was no present. For a guy riding in his final Vuelta after a long career, it was a win earned the hard way and the smart way on a fascinating stage where lots of teams had work to do.

The victory went to Andalucia-Cayasur’s veteran Luis Perez, who started out as a fresh-faced neo-pro back in 1995 with ONCE. His wildcard team finally got their reward for a Vuelta of ceaseless attacking. 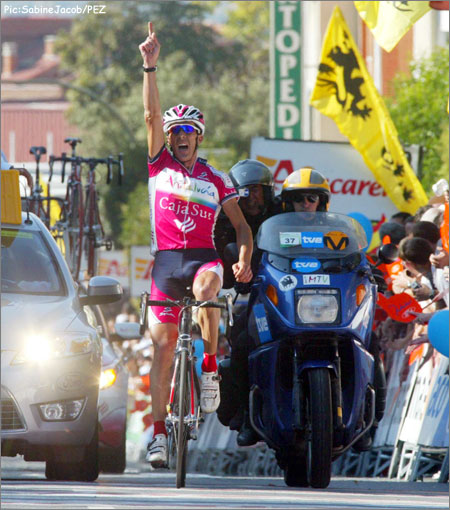 Perez had been in the front group on a very active stage where some of the top ten placings switched around. He got bored of the shenanigans as CSC drove for Sastre, Euskaltel worked for Samuel Sanchez, QuickStep pulled for Carlos Barredo and Franco Pellizotti did as little work as possible.

On paper, it looked like a stage for a break to go the distance, and for the big ‘capos’ to have another day off before they hit the last major mountains tomorrow. A category one and a category two climb, plus the cobbled streets of the finish didn’t look like causing too much chaos, but … 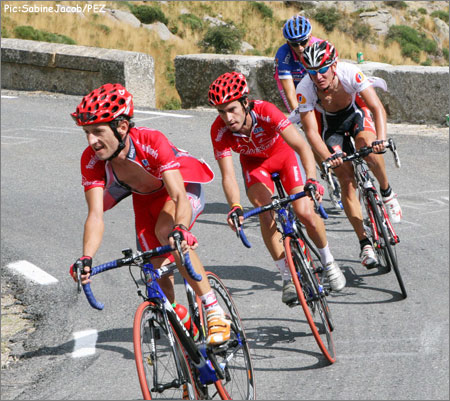 … Vladimir Efimkin got into difficulties on the Porte de Mijares. It looked like a training manual move – CSC stuck three hard men in the lead group on the road, and Sastre chased up to join them on the climb.

Menchov and Evans pursued, which put the hurt on Efimkin straight away. That meant CSC (Gustov, Sorenson, Cuesta and Vandevelde at varying times) had their foot on the gas.

As Efimkin disappeared, every team further down the classification started riding, so we saw Euskaltel and QuickStep trying to damage Efimkin. Caisse d’ Epargne and Liquigas just tried to limit their losses after that.

With 11kms to go, Perez went for his last hurrah and motored away – the group sort of looked at each other, and pondered what to do. By the time they figured on doing very little, Perez was on his way to a second career Vuelta stage. 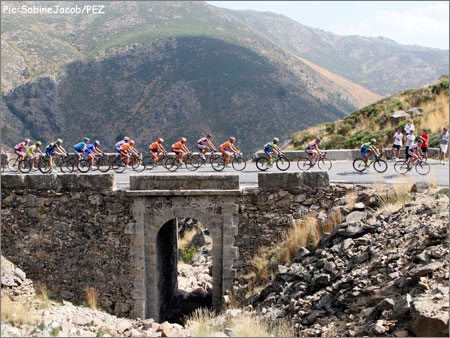 Pellizotti had been first over the tops of the two climbs, but he was gambling on everyone else pulling him to the tough cobbled finish. He did no chasing as he sat firmly at the back of the group.

Menchov dutifully rolled through to the front for a couple of half-hearted turns, but it was more for show than anything else. Also, it reminded everyone who was in charge, and maybe might pull him in a few favours tomorrow if he needs them on the climbs. 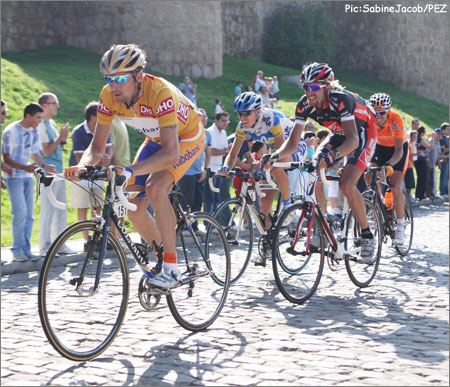 Perez wasn’t worrying about the politics, though. He had his head down as he raced back into Avila on the second and final finishing circuit.

Two kilometres to go, and the road got nasty, the cobbles biting and the rising road adding a twist of pain – Perez trying to roll the legs around like the mechanism of a rusty timepiece. 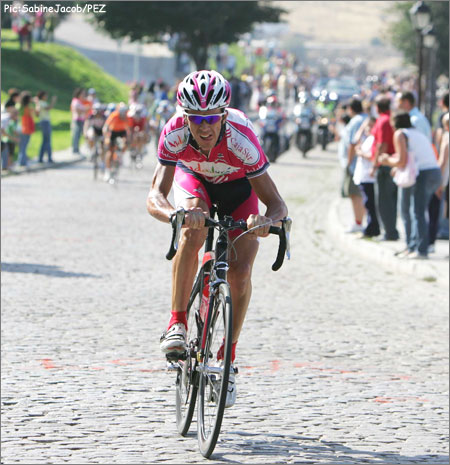 He got a few curious looks from the backmarkers – a mere 11kms behind the leader – as he flew past them under the red kite. The chasing group was making no impression as the lead held steady at 40 seconds. It was Perez’s day and he knew it, finger pointing to the sky as he swept over the line. A well-taken win, and much merited. 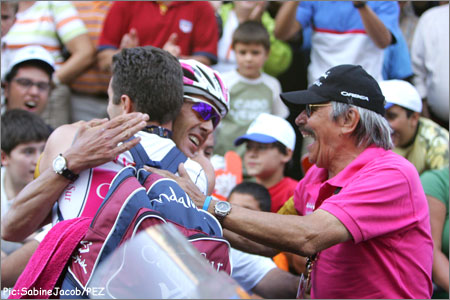 Tomorrow is the last real road racing rendezvous of the Vuelta on the slopes of the Alto de Abantos. Pez will make sure you don’t miss anything, so don’t touch that dial.