A thrilling uphill sprint, a big pile-up in the last three kilometers and a very animated, deposed race leader. It all happened in the closing stages of a sun-baked Vuelta Sunday afternoon.

One man offski … to his home, sadly, was Tom Danielson. A miserable season ending with a broken collarbone after yesterday’s tumble. Cunego came down also on stage one, and had a fair few stitches holding him together.

In fact, the race doctor was a busy chap today. Brad McGee was getting on first name terms with a couple of visits to the doctor’s car – not sure yet if his problem is going to affect his long-term chances in this Vuelta. 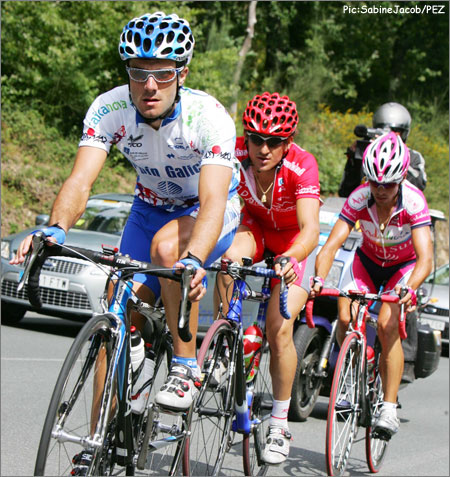 The happy offski’s had a long day out front.

Manny Vazquez will have a nice welt to mark his time in the break after being stung by a wasp, and Sergio Paulinho of Discovery was also back for treatment.

Another crash with about 60kms left took down Christian Van de Velde of CSC and Lampre’s Sylvester Szmyd, although the most damaged was Cofidis domestique Sebastian Minard – they all continued, but Minard looked like he was hurting.

The escape trio never got too much leeway … hovering around the three and a half minute mark as Lampre and Milram kept an eye on things. After all, today was a very short stage, so control freaks were justified in shutting things down.

Not entirely flat though, as there were a lot of lumps and bumps before things flattened out a bit towards the line. Inside the last 20kms, and Bennati was safely sitting at the back of the long pink and blue Lampre train. The maillot d’ oro seemed to suit him just as well as his usual tunic.

20kms from the end, as the escapees ground their way up a climb at 25kms per hour, Angel Gomez of Saunier-Duval motored away from the field. Time-trialling across to the leaders, he personally spelt out the end of the breakaway.

It took him about 4 kilometres to get on terms, and he sat on to recover as soon as he got there. He only enjoyed the freedom for another kilometre, though, as the bunch was on terms almost immediately. 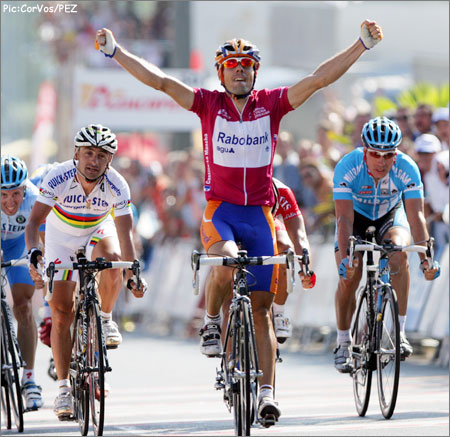 Oscar Freire is coming ’round again just about when you’d expect him: it’s almost Worlds time.

The problem was that the peloton might have given the initial trio another 10kms or so before reeling them in – but as soon as Gomez went, they couldn’t take the chance that the fresh legs might ride out to a handy lead.

The peloton was all together as they hit the finishing line for the first time – an 11km finishing circuit awaited. Discovery were on the front, with a wedge of lime on the side – Liquigas massing together.

The Swedish champion’s jersey was nicely to the fore on the broad shoulders of PEZ columnist Magnus Backstedt. Hurtling into the final six or seven kilometers, Maggy was charging along at over 40 miles per hour down the dual carriageway, trying to set things up for Francesco Chicchi.

Maggy did a thunderous turn before swinging off once he’d guided the front of the peloton through a tight right-hander with 3kms to go.

Patrick Calcagni took the front for Liquigas, his heart thumping (according to on-screen info) at a tasty 197 bpm! 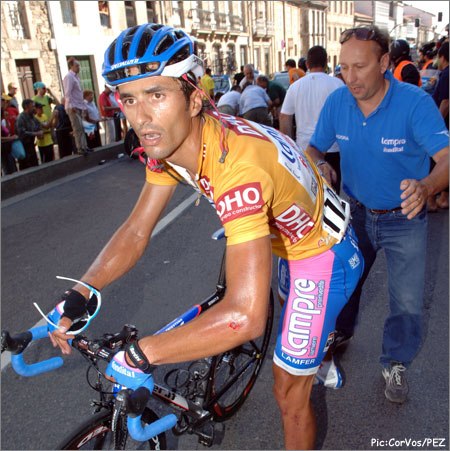 We saw a very unhappy Bennati after the mass pile-up.

Two kilometers to go, and a mass crash took out almost half the field. Devolder was left sitting on the ground.

Bennati lost his jersey as a result of the crash. Knowing he wouldn’t get back as the leaders sped for the line, he turned his attention to holding a full-on arm waving argument with one of the Euskaltel riders…who calmly wagged a finger back, not in the slightest bit intimidated.

Vlad ‘The Impaler’ Karpets and local boy Oscar Pereiro were held up. Pereiro looked none too clever holding his collarbone, but seemed in slightly better shape when he got to the line. 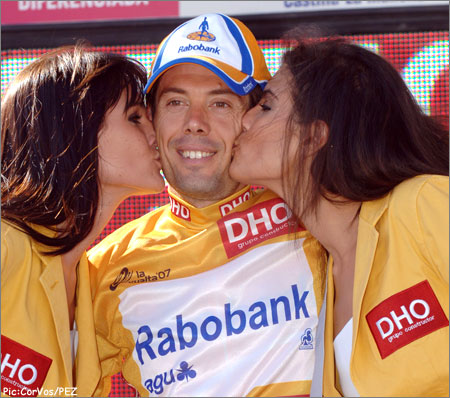 Bennati falls, Freire wins, and Freire is in Gold.

Up front, Phillipe Gilbert – the man the dopers love to hate – had taken off amid the chaos. His brave bid for the stage win was thwarted as his strength faded on the uphill gradient.

Petacchi wasn’t up to it so Zabel launched for the line. Freire turned on the gas and pulled away, and although Bettini was finishing fast, he just couldn’t get on terms.

Freire takes over from Bennati in the gold leader’s jersey and looked very chuffed as he chucked the bouquet into the crowd. He also takes the points jersey, so a very good day for the man from Torralavega and his Rabobank squad.

The average speed of the day was around 40kms per hour – not super quick for stage two of a grand tour. Keep it Pez for all the back stories, gossip and feedback!