The sprinters’ respite is over as the Vuelta served up its first dose of bumps, on the leg breaking, yet fun to say, Lagos de Covadonga, an HC beast that averages just over 7% for just over 10km. By day’s end, Senor Freire would be gone from Gold, while young Russian Phenom Vladimir Efimkin stormed the stage and found the Golden Fleece! It was carnage on the climb… 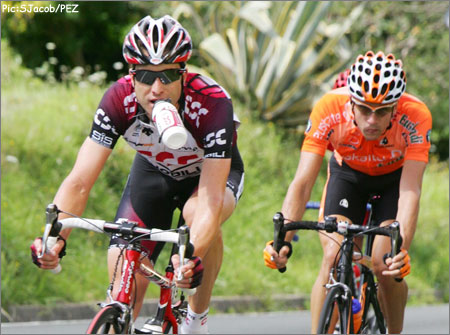 Christian Vande Velde spent a hardworking day in the break, was caught by the leaders on the climb, and then set a ferocious tempo for little Sastre. A good day’s work for the Slipstream bound rider.

At about 60k to go, the Alto de la Llama (this race has Llamas in it, too?), a Cat 3 warm up for the Covadonga, raised its head. Behind the massive break, the Caisse d’Epargne team kept everything under control at the front of the group.

Nothing changed as the Covadonga loomed with its Hors Categorie status, save for Josй Vicente Garcia (Caisse d’Epargne) exiting the break and going back to the main group, leaving 29 souls up front to explode once the climb started. CSC and Rabobank threw a few deckhands into the chase to keep things close enough between the peloton, and the oversized break. 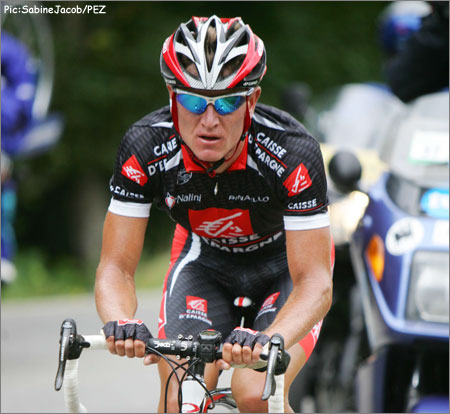 It didn’t take long for Efimkin to run away on the Covadonga.

Crash! With just 24 k to go, a crash happened taking down Pietro Caucchioli (Crйdit Agricole), Josй Angel Gomez Marchante (Saunier Duval-Prodir) , Erki Pьtsep (Bouygues Telecom), and the back-from-sickness Iowa boy, Jason McCartney of Discovery Channel. Caucchioli and Marchante had to be pissed, as they certainly looked to be contenders for a high placing in the GC. 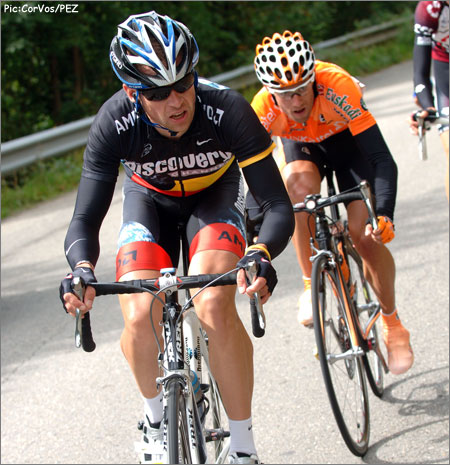 Eventually everyone from the break was caught save for Efimkin and…Devolder? The horrible visibility and lack of cameras on certain riders allowed Devolder to stay in no man’s land between Efimkin and the chasers until the final k!

12k to go, the Covadonga started. And, as expected, the inclines were met with varying degrees of receptivity and the 28 guys up front (David Garcia had jettisoned himself earlier) scattered all over the road. Sylvain Chavanel was the first to go off the front, but was quickly overtaken by Vladimir Efimkin (Caisse d’Epargne), who went ahead by himself. Behind, the CSC threshing machine snacked on the remnants of the break it could reach, positioning Carlos Sastre for a good finish. Riders were all over, and the poor visibility made for tough times figuring out who was where. The danger men were near the front, Pereiro and Menchov, as the front group behind Efimkin now numbered only around 10, with the big names having arrived, and the lesser riders reverse attacking the group. Efimkin held just under 2 minutes lead. 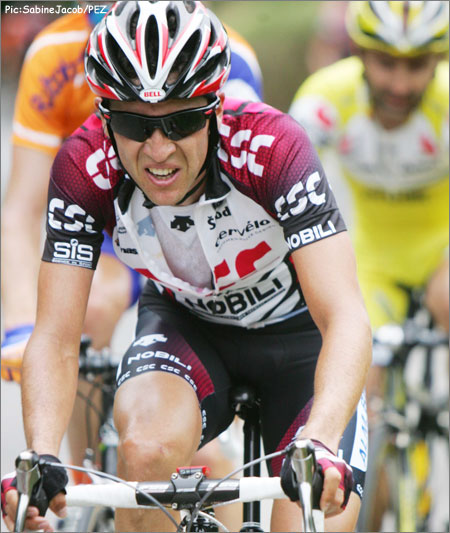 Carlos Sastre showed us a new face today – the attacker.

Then Carlos Sastre did a decidedly odd thing (for Carlos Sastre) – he attacked. True, the attack was vicious and tough, but the real fun in it was seeing a full-scale crack by Oscar Pereiro who appeared to break both femurs simultaneously, but I digress.

After that, there were but a few remaining, and ten Denis Menchov of Rabobank attacked hard, and only Sastre could join him as the two clawed their way up toward the Russian. Cadel Evans, under escort of Chris Horner, also scratched his way back up to the front, as well as Stijn Devolder (Discovery) and Leonardo Piepoli (Saunier Duval) and here we had the first rending of true contenders for the 2007 Vuelta, as ahead Efimkin seemed a sure stage winner.
Menchov dug once more, and this time Cadel Evans went backwards as only Sastre could keep the wheel. Devolder and Piepoli entered the frame and the race in the final 2 k was one of attrition. 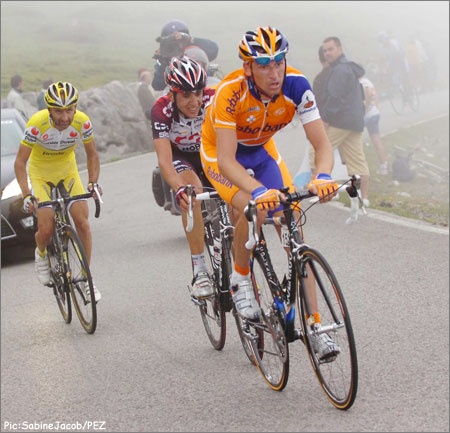 Menchov, Sastre, and Piepoli enjoyed a jovial ride up the Covadonga today.

Ahead, the young Russian took the greatest win of his life, crossing the line in 4:29, and taking control of the leaders gold jersey, while behind, Piepoli edged Devolder (who seemed to come out of absolute nowhere), and overall favorites Sastre and Menchov shadow boxed further down the top ten. 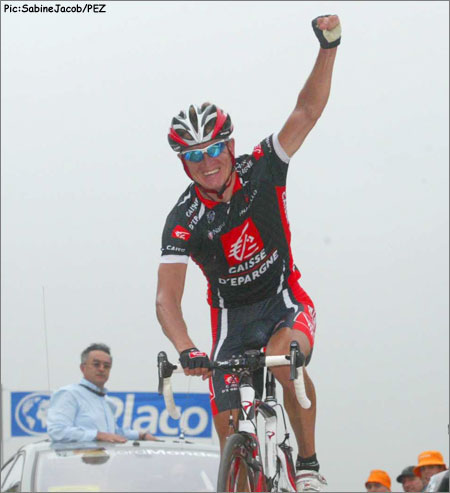 A mountain stage in the first week has dropped a bomb on this year’s Vuelta, let’s see how long the young Russian can hang onto the golden fleece! Stay tuned to Pez for all your Vuelta needs! 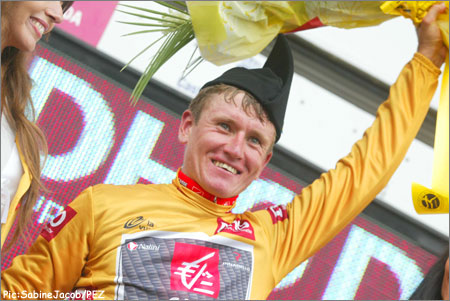