Another tough day in the saddle for the riders with many a climb and a big ol mean thing towards the end that will surely spell the doom for a few – will it be a break or a sprint or something altogether spectacular? I’m assuming you read the title, so you can probably guess the answer. Read on…

You know those peculiar days at a Grand Tour when a break just can’t seem to establish itself? Sometimes it just takes three and a half hard pedal strokes off the line and you’re off to a long, lonely, painful day of stewardship to the road. Then there are other days when efforts a la Fabian Cancellara at last year’s Paris-Roubaix aren’t enough (read: a motorbike sometimes ain’t fast enough, but of course he was fast enough in that instance, but you know what I mean). Today was something like that.

So the day’s stage includes three Cat 2 climbs in rapid succession followed by the lovely old maid, the Cat 1 Puerto de la Palombera. 80k into the race, moves have been going left, right, center, and gutter, but nothing good enough to really be called THE move, especially since all of the moves are caught. It’s hard to be THE move when you get caught. I digress. Back to the story. 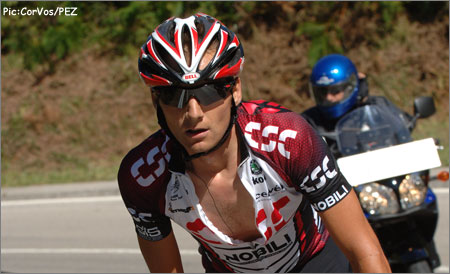 The first two Cat 2’s made for moves a’plenty, with riders a’plenty, but it’s not until the final Cat 2, the Collada de Carmona that we get our move, THE move rather.

Karsten Kroon (CSC) and Angel Gomez Gomez Gomez (Saunier), wait, there are only two Gomez’ sorry, Angel Gomez Gomez, whose nickname is apparently Litu, ride away to a nice gap and they put their heads down, pedal hard, drink, eat, pedal some more, and do the whole breakaway thing. 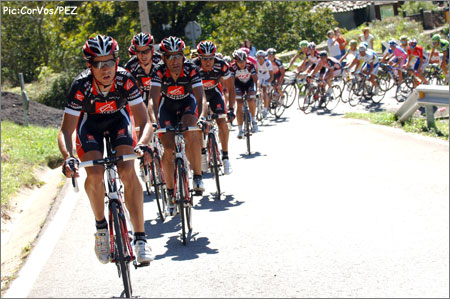 Up next on the route is the big ol Cat 1 monster, weighing in at nearly 10 miles in length at a 6% average, the Puerto de la Palombara. Caisse D’Epargne set a smooth pace for the field heading into the climb back in the main bunch, and as the climb starts, it’s Rabobank doing their dirtiest pace-setting as one after another or even handfuls at a time of riders attack off the back for the caravan. 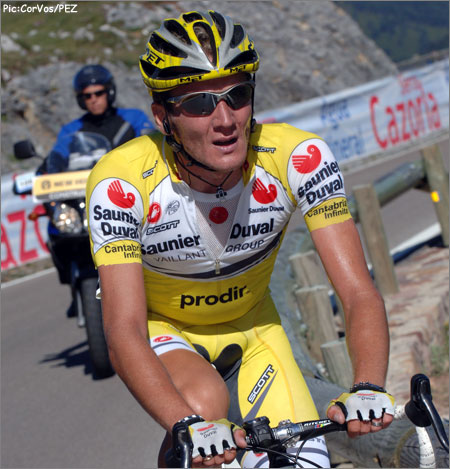 In the break, Gomez Gomez and Kroon plod ever upwards. Towards the top, Gomez Gomez bids Kroon adieu and heads for the relative comfort of the field, whilst Kroon keeps chug chug chuggin toward the top. Out of the field, another Saunier rider realizes that they’ve been dropped out of the break! Holy moly, we need a guy in the break! Jose Angel Gomez Marchante, get up to that break!

So JAGM, buries himself to try and get across, momentarily forgetting that he is a GC favorite and no team with half a sliver of a brain is going to let this guy ride up the road. So of course he doesn’t get there, and poor unfortunate Karsten Kroon is up the road all by his lonesome with 20k to go at the top of the climb. The peloton follows shortly after Kroon – only 1:25 in arrears and now everyone looks around to see what sprinters are left, because the fireworks never really got lit on the climb – it’s going to be a big bad bunch sprint. 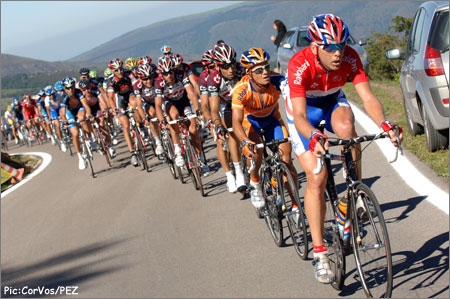 Fast forward the chase a bit, Karsten Kroon is fighting the good fight, but the concerted chase by Rabobank as well as a number of other sprinter teams are putting paid to any chances KK might have had. And yet, he carries on, slaving away, hoping for the best? With 5k to go his great escape is put to rest and the sprint is on in earnest. 3k to go and it’s Lampre on the front for Bennati. All of the big sprinters save for Petacchi are here: Freire, Bettini, Zabel, Bennati, and those are just the ones I picked out, and mine eyes are what they once were.

The race is getting amped up to lovely bunch sprint levels, and at the very back is none other than Leonardo Piepoli who wants none of the love at the front.

1k to go and it’s Milram on the front for Zabel, then a monster pull from a rider in blue, I think it was QuickStep. It never ceases to amaze me how fast and hard it’s possible to ride in the final kilometer, well, maybe not me, but these guys on TV. It’s a full-on sprint the whole way to the line, and now Philippe Gilbert pops around with a quick acceleration to lead through the tight right-hand turn to the finish.

Hold your breath, is anyone going to fall down? Nope. Good. 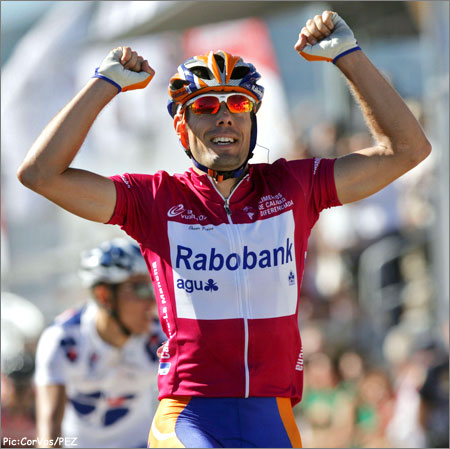 It’s a good move for Gilbert who gets a little bit of a head-start into the real sprint, but Bennati and Bettini are immediately raging forward toward the line with a decent gap on Freire, but of course, Freire doesn’t hit the nitrous until about 100m to go, and then POW. Sure enough, Freire appears to have clicked into his 59×10, and just destroys the few bike length gap the two Italians had on him, and wins by half a bike…that’s win #47 for Freire. 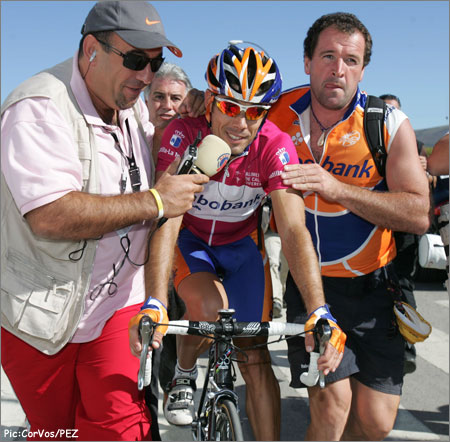 Talk about a season for Freire so far, complete with a long absence due to injury: a win at the Trofeo Mallorca, the Ruta Del Sol, of course his second Milano-Sanremo, going northern for the Fleche Brabanconne, now he has two stages of the Vuelta, to go along with a couple of runner-ups at Le Tour whilst riding at half-capacity, and then his recent 2nd over in Hamburg at the Cyclassics. That’s a banner year boy howdy.

Looking for a favorite for the Worlds? Look no further than Oscar Freire. Usually it’s a mild surprise when Freire wins, but he’s looking to head into the Worlds in Stuttgart as a heavy favorite if he continues at this rate.

CERVELO SOLOIST: We Have A WINNER!