To let someone jump your sprint train once is a mistake, twice is a sin, three times … well, it looks like you’re just renting out the box car. Milram might want to check the tracks because their sprinters aren’t getting up to full speed.

Another Vuelta stage, another power of work and precisely zip to show for it as Petacchi comes up short again. Biking’s a tough business, and although we’re looking for a new, ethical approach where the taking part counts more than winning, you can bet there will be a few finance executives wondering why their Euros aren’t buying a victory. 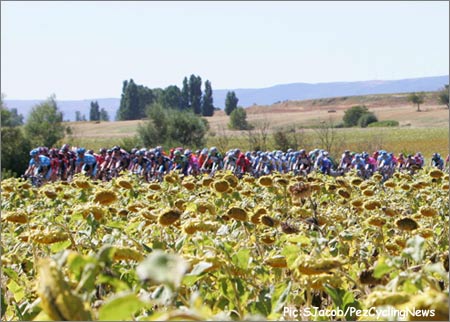 No. We’re not in France and this is not Le Tour…

Today, the team did a good job but they ran up against an Oscar Friere who is in blazing form, snagging a third win with contemptuous ease.

T-Mobile similarly invested a huge amount of horsepower in their ‘Two Andrйs’ double-act – Korff and Griepel – as they piled half a squad on the front for the closing kilometres. Milram sat in the wheels before muscling their way to the front at 3kms to go.

Lampre had disappeared by this point, so maybe Bennati had given the word that he wasn’t feeling too hot.

Milram had Zabel pulling Petacchi through and things were looking good for the Milkmen. Inside the final kilometre, they still had things under control, but Boonen was there after getting a hand up from the World Champion Bettini. 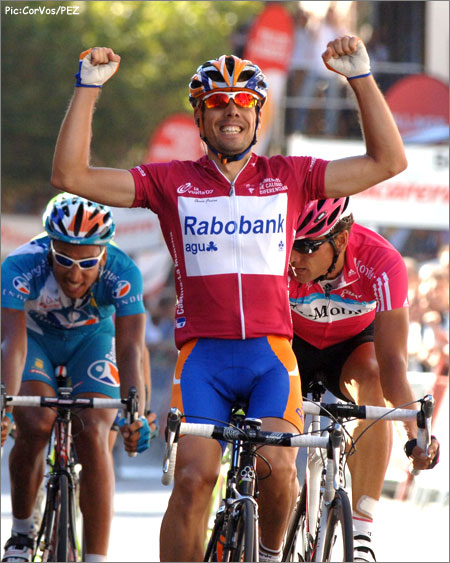 Don’t even both trying – he’s healthy.

In the final few hundred metres, a slight right hand ripple proved no trouble for the peloton. Discovery’s Allan Davis went early on the right but in the centre Friere kicked off Petacchi’s wheel and, as if by magic, the gap appeared.

Oscarito gave it the gun and the win was nailed. Boonen looked like he was hitting form as his finish was faster than the last few sprints, but he’d left it too late to get past Fernandez and Korff.

So Freire/Rabobank have an interesting conundrum – does he go for more stage wins? Does he go for the points classification? Does he want to throttle back a touch before he goes for a record fourth World Title? Hmmm ……… 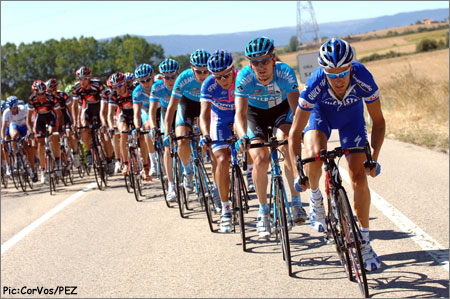 There probably aren’t too many things more fun than slaving away all day at the front and then getting crushed in the finale.

The happiest man right now must be Menchov, sitting in second overall with no pressure and a relatively fresh team because Oscar Friere sure as Hell hasn’t needed too much help from the Rabo-boys so far!

We also need to give a big shout to Pez-columnist and living legend Magnus Backstedt who snared some significant air time and a healthy boost to his preparation for the Worlds with a long breakaway. 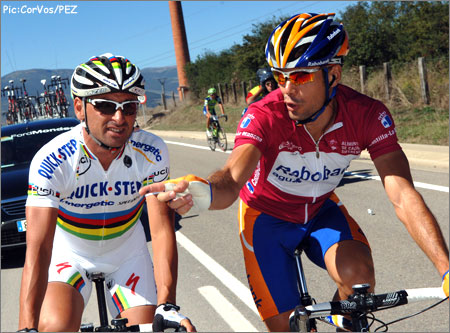 Seriously, Paolo, I’m going to destroy you in a little bit. You can’t honestly think you can sprint with me today.

The rather natty Swedish national champion’s kit was accompanied by the red of Cofidis (Mr Stephane Auge); the blue and white of Ag2r (take a bow, Yuri Krivtsov) and Andalucia-Cayasur’s largely magenta number (Jose Antonio Lopez).

They were a maximum eight minutes clear after jumping away inside the first 10kms. They worked well together, but on such a stage profile, it was a major operation to stay clear to the finish. Lopez let go at 20kms to the finish, so it became an even bigger ask for just three. 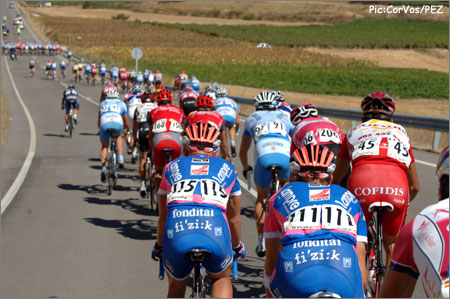 The riders were blessed with a dearth of mountains today, but they received wind instead.

Inside the last 20kms, and the shots from the camera suggested that there were a lot of guys hanging on by … their … teeth. Lots of tired legs after just six stages, and a cross-wind from the right had some guys hurting.

Lampre, QuickStep and Milram were mixing themselves up on the front as the peloton strung out. CSC were working well to keep Sastre out of trouble. 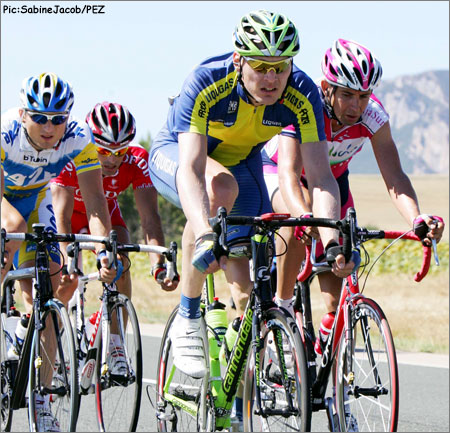 When Backstedt was at the back of the break, you couldn’t even see Krivtsov and Auge, so Big Maggy didn’t seem like he was getting too much shelter when the little guys were pulling.

Maggy gave it one last kick at 8kms to go, but he couldn’t shake his companions, or the giant preying mantis of the peloton which got its teeth into them just moments later.

Make sure to keep it PEZ for all the latest from the Vuelta!

Showtime 2: Eurobike Gets In Gear