It’s been a lot of speed and a lot of drama in the 2007 Vuelta, one has to wonder what today might bring for the riders, but with a mountain down, nothing but sprinting in between, and a big, fat TT tomorrow, it just had to be a day for the sprinters.

And in the beginning, there was a break, and the break was good. Sigh. Ah yes, the doomed couple of escapees (“I’ll get us on TV, boss!”) consisted of Jesъs Rosendo (Andalucia-Cayasur) and Raul Garcнa de Mateo (Relax-GAM). The two hammered off together and put over 5 minutes in their pocket with still about 70km to go. Remember how a few days ago it took 100k of intense, aggressive racing from an entire field to see a break wrest free of the grip of la peloton? Yeah, well, today took a whole, 2 feet. The duo attacked at Kilometer ZERO. 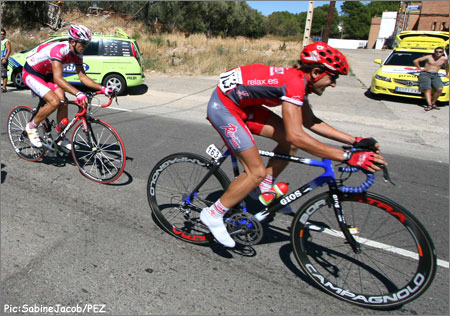 Happy happy fun times! These two lucky pedal masters received the gift of 169 km out front! Come on down!

By 60km to go, Milram and Lampre began to choke the life out of the escapees dream, and the gap began to fall quickly. Oddly enough Rabobank was sparse at the front but one had to think ol’ Oscarito would be lurking somewhere to improve on his hat trick.

And so they flew down the open roads to the urban center of Zaragoza. The interminable chase from behind had the field nicely strung out, which allowed for some notable movements in the field. We got to see our friend Magnus head back to the team car, grab some bottles, and ride his way up the entire length of lined out field. Bettini did the same, but for no apparent reason other than to taste some open air I guess. 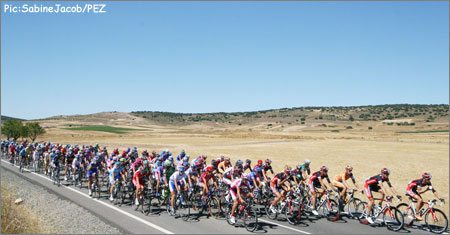 At the front, it was Milram slaving away and then BAM suddenly it looked like everyone was on the ground. At least 30 riders looked for their surfboards for a little asphalt surfing, but instead tried lycra, and as anyone that’s anyone knows, lyrca is a miserable boarding device.

Of course, the first thing that had to be done was see who was involved – any GC guys, any sprinters? Who was going to be the victim, because disappointingly there always is. Sure enough, it was our man on Predictor, Bert Roesems, just a day off from the big TT and he didn’t get up quickly. He eventually did get up, but it was only to take his spot on a waiting stretcher. We’re hoping for the best for Big Bert.

As we all felt bad for Bert, the race headed inexorably onward to the line. The duo of daring pedal mashers up front had their heads down, brows furrowed, legs a’flexing, but there was no use, the stage had been set long ago and they were merely actors in the play, going through the motions for the 1000th time. Indeed, the catch was made with 7k to go, and on the front, Milram is in complete control.

Five Milram milk boys have their BMWs in 6th gear with no signs of letting up, but this finish is fast, and it doesn’t take long before every leadout train in the business is vying to usurp the Milram dominance. QuickStep, TMobile, Lampre, FdJ, everyone wants a piece of the action at the front and the fight for control of the front leads to delicious disarray. 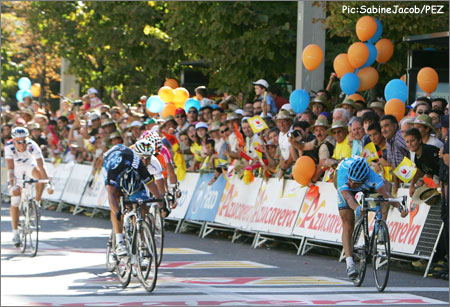 The throw for the line goes to…

The pace from the riders at the front is impressive on the TV, but for the poor souls midway down the field and further back, it is beginning to rip their legs to shreds and gaps are opening, and then suddenly, wait for it, wait for it, BAM! There’s a huge gap, except this time it’s right at the front! Somebody went down, it was hard to tell exactly what happened, but suddenly there’s a monstrous gap between the field and a small 15ish rider group and we’re inside the final kilometer.

Everyone looks around at each other: what’s up now? What do we do? It’s almost comical to watch some of the world’s best sprinters all take a step back for a moment and pause to ponder just what might be the best course of action. Bettini, Zabel, Bennati, Gilbert, Davis, Fernandez – they’re all there, and the final kilometer is uber-technical with a big roundabout heading into the official sprint. 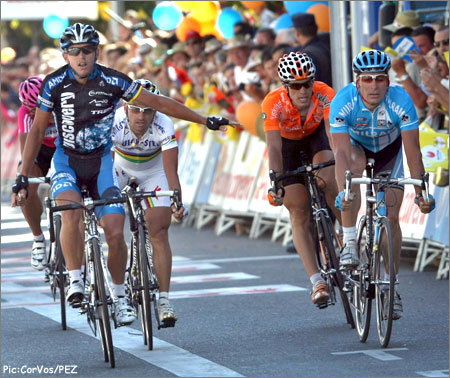 Luis Leon Sanchez leads it out of the final bend as the sprint opens wide. Zabel heads for the barriers and looks to have it, but Davis is coming on really strong as both throw their bikes. Allan Davis throws his hands up and celebrates, but then something entirely amusing happens: we see the replay and Zabel plainly took the win by about half a wheel.

Oops. About that victory salute…

Milram had been hoping to drive Petacchi to a Vuelta stage today, but things happened, people fell down, and instead they got ol Ete. Not a bad compromise! 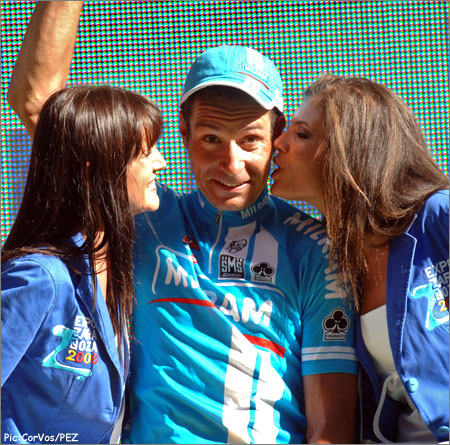 My bad, sorry about your face ma’am.

The day’s misadventures continue to the podium as experienced podium man, Zabel accidentally just elbowed the Podium Girl in the face as she so kindly tried to give him a kiss. 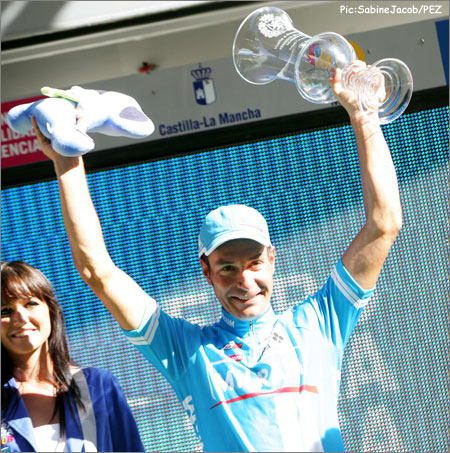 Happy Day! A trophy and a stuffed animal for me!

Up next for tomorrow: the 52k downhill-ish TT. The first and only long TT of the Vuelta. If there’s some kind of helping wind, we could possibly get one of the faster TTs in GT history. Either way, it’s a date for the GC boys and a chance to make up for some already lost time or to lose even more. Keep it PEZ, we’ll be here, we’re always here. 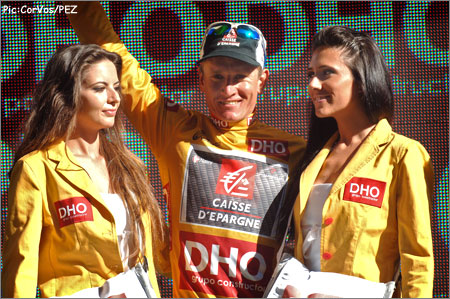 Vladimir Efimkin goes into tomorrow’s TT with a nice lead, but if the final TT at the Tour de Suisse is any marker, Efimkin should be oh so concerned. Efimkin went into that TT in the lead, but went over three minutes slower than Cancellara on the day and plummeted down GC. Can he pull off something better tomorrow?

Kuota’s KOM Gets Pimped and Tested

Magnus Maximus: A Day In The Break