He said that he wasn’t a GC contender and that his race effectively finishes tomorrow. So he targets today’s stage, and whadda ya know ………. he wins it! Who he? The damage he did pushed Stijn Devolder out of the overall lead. Read on to find out.

He is … Leonardo Piepoli, the Saunier-Duval man who has been, arguably, the most dynamic and explosive climber of the last two years, especially at the Giro. He’d just been claiming that today’s finish to Cerler or tomorrow’s yomp to Arcalis were his only two chances at the Vuelta. 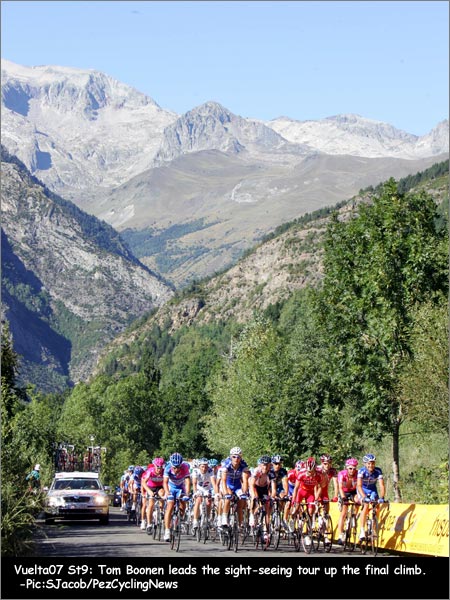 To go one for one on your first target is pretty nice shooting. Piepoli’s brilliance was matched by Rabobank’s Denis Menchov, now back in the leader’s jersey after Stijn Devolder’s brief tenancy. Maybe Rabobank will, finally, get a legit first-across-the-line Grand Tour win. After all, Heras robbed Menchov of his moment in the sun two years ago and we’re only two months on from their self-imposed immolation at the Tour.

A big escape group of 13 had fled the coup once Discovery Channel and Rabobank had felt the coast was clear for an escape. In that group: Rebellin from Gerolsteiner; Garcia Acosta and Lopez (Caisse d’ Epargne); Wim Van Huffel of Predictor-Lotto; Ag2r’s Goubert; Gomez Marchante, Saunier’s erstwhile GC contender; Possoni and Szymd of Lampre; Vanotti of Liquigas; Kern (Credit Agricole); Hernandez (Euskaltel); Martinez of Karpin-Galicia and Christian Vande Velde of CSC. 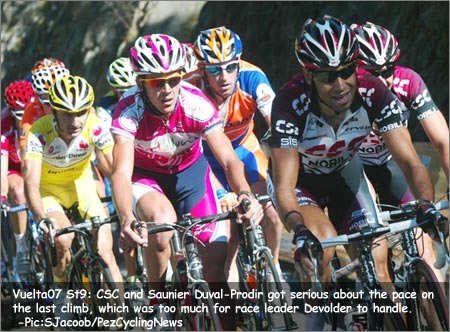 They didn’t get too much leeway given that Rabo and Disco wanted to keep things tight, but they did get their head to lead over the first three of the day’s four climbs.

It was too big a group to satisfy all the different strategic requirements of the teams so it started to fall apart in the last 30kms although the peloton let them stew before overtaking them prior to the final ascent – a beast at 12.5kms and an average gradient of 5.5%, topping out over 1800 metres.

Alessandro Vanotti decided to prolong his own personal agony and jumped away alone. Behind him, CSC and Saunier Duval were in charge of the pace, immediately distancing Devolder who drifted backwards. 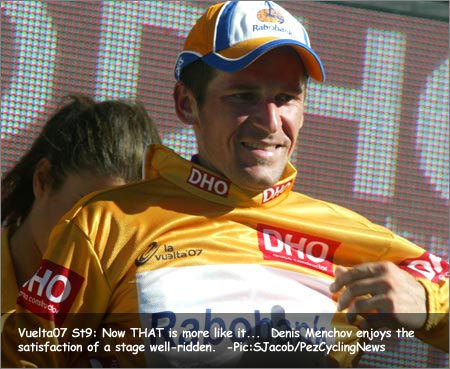 The lead group was melting on a roasting hot day, with more and more riders vanishing. Piepoli was doing the pulling about halfway up before Menchov took over. Evans and Sastre were going backwards, too, as Menchov sensed the overall picture becoming clearer for him.

Menchov and Piepoli continued to pile it on, and there was no sprint to speak of as the Russian let his companion take the stage. Piepoli, clearly on a mission, didn’t look like he’d have taken any prisoners anyway – the win was exactly what he deserved after another outstanding climbing display and a difficult summer.

Behind, Sastre clawed his way to fourth, just 16 seconds down, finishing alongside the super Mosquera from Karpin-Galicia. 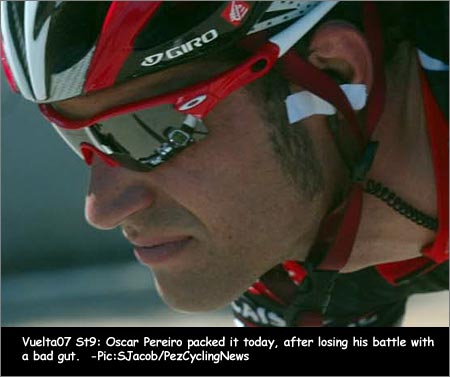 Several abandons today unfortunately – Oscar Pereiro gave up the fight after his stomach ailments; Brad McGee ditched as well – hopefully to rest up for a proper go at 2008 – and Francesco Chicchi also bailed. 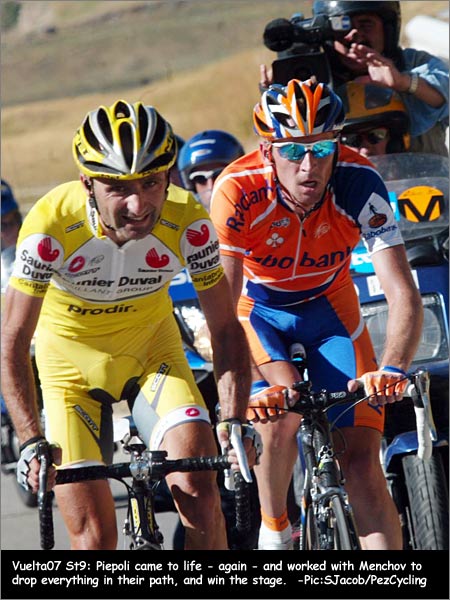 Leonardo Piepoli ”Iґm so happy with this. A stage win is important for both me and the team, all the more so if it comes in a grand tour. I had pointed at three particular stages in this Vuelta: Lagos, Cerler and Andorra. In Lagos, I managed 2nd and today I finished 1st, which means I can feel happy about my results so far. Also, I grabbed a stage win in the Giro, so I can tell this has been a great season to me. That there was an agreement with Menchov? Well, it was only natural, taking into account how the race unfolded. Menchov needed partners for the rest of the Vuelta, gaining time for his overall leadership. So it was a win-win situation to both of us. Besides, weґre good friends since we weґve been teammates. Why not fight for the GC? I used to do it, once I ended 8th, but now Iґd rather raising my arms in victory after a stage. At my age, my career is almost done so I prefer this to being 4th or 6th in the GC. Iґd like to dedicate this victory to my first son, Yanis, whoґll be born soon. ”

Make sure you keep it Pez for all the best coverage of the Vuelta, especially for tomorrow’s 214km slugfest to Arcalis. Don’t touch that dial!