It’s that time again, La Vuelta a Espaсa starts tomorrow in the Andalucнan town of Granada and we sent our man in Spain, Alastair Hamilton, to tap in before it all kicks off. Alberto & Alejandro talked to the press, we collected our official creds, and the weather looks sunny and warm…

• Sign up NOW to see all the racing Live on Cycling.TV • 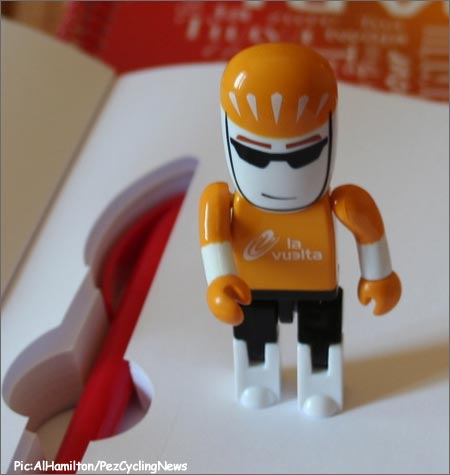 I had an easy start to the day, I didn’t have to leave too early for a four drive south to Granada. I was soon on the Auto via del Meditaraneo which heads through the dry area of Murcia with its castles and pig farms south into Andalucнa, which also has many castles, but more olive trees than pig farms. I passed the Troglodyte village near Guadix with broad vistas of parched dry earth and then about 50 kilometers from Granada the landscape changes remarkably as the monster mountain range of the Sierra Nevada looms up on your left hand side. It’s much greener now and there are lots of fir trees, but I don’t see any snow on the top of the mountain, there is normally some white to be seen even in August. 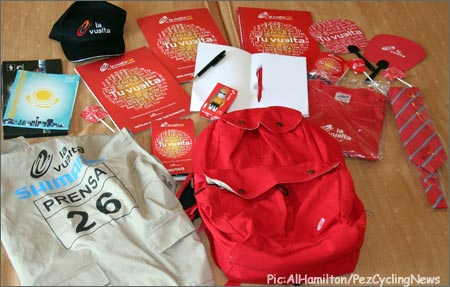 I arrived at the ‘Oficinas permanents y sala de prensa’ nice and early to get hold of all my important documents, and of course to see what goodies they were giving to us poor Journo’s. What a mixed bag it was, a nice ruck sack for the lap top, hat, T-shirt, tie, note books, kids sweets, fans and best of all a little Vuelta man who is also a USB memory stick, not sure about the tie though! 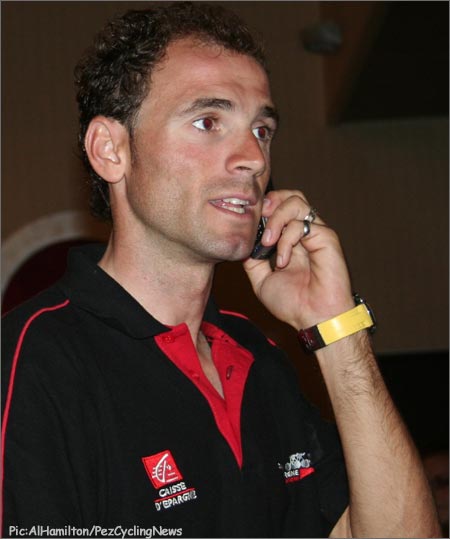 So first up was the press conference with Alejandro Valverde, the usual stuff that you expect, “Alberto (Contador) is the favorite, it’s a beautiful Vuelta with opportunities for the climbers and the sprinters.” He didn’t mention the Time trialists. “Tomorrow is important, but could be dangerous with the corners.”

Next up was Alberto Contador, “Valverde had a bad day in the Tour and might have something to prove, there are many for the general. This Vuelta is good for me and Carlos Sastre, cycling isn’t like mathematics, we don’t know what might happen. My inspiration isn’t to beat Sastre because he won the Tour, but to win the La Vuelta. I was preparing for La Vuelta at the Olympics, I was pleased with my time trial, a bronze medal would have been nice for me, but…..”

Well that was it from the stars; time to look at some bikes and Levi was at the Astana truck messing with his shoes and the stem on his TT bike. Rumors are rife at moment about what teams will be riding what next year, Columbia with Trek, Rabobank with Giant, Sastre to go with the new Cervelo team and leave CSC-Saxo Bank and Astana ?

For me it’s time for food, find my hotel and then onto the Teams presentation this evening, the race book says 7pm, but the newspapers and TV say 8pm, it could be a repeat of two years ago in Malaga where Abraham Olano was close to melt down!

Ireland’08: Fleeman Takes Us Inside!