Race Report: All the news today is about Lance; Freire won the stage into Burgos, passing a flying Tom Boonen, so what’s the first question he’s asked? “What do you think of the return of Lance?” It was a nice win for Oscar Freire and he looks good for the Worlds, but everything is under the Lance shadow today!

Stage 11 is a transition stage of 178 kilometers from Calahorra to Burgos with the 3rd cat climb of the Alto de Valmala followed by 36 downhill kilometers to the finish. The race is heading west across the north of Spain towards the region of Asturias and the crucial stage on Saturday that finishes up the much feared Alto de LпїЅAngliru.

The Early Break
Three riders slipped away from the peloton 30 kilometers after the start proper and built up a handy lead of nearly 8 minutes in front of the Euskaltel controlled bunch. The three were Serafin Martinez (Xacobeo), Andriy Grivko (Milram) and JosпїЅ Antonio LпїЅpez (Andalucia). 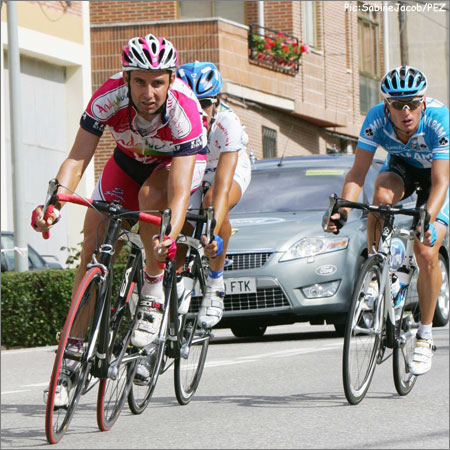 At the start all the talk was about the return of Lance Armstrong, Alberto Contador was smiling and pleased to hear the news. JosпїЅ Luis Rubiera (Astana) said пїЅLance was the best cyclist of the last 10 years; it will be good to have him back.пїЅ Johan Bryneel was putting more emphasis on the battle against cancer and that Lance wanted to take it to a global audience. He also said that пїЅArmstrong would be riding for free! No pay, nothing!пїЅ

Other news concerns Alejandro Valverde, the headline in пїЅSportпїЅ is пїЅValverdeпїЅs knee sets off alarmsпїЅ. They say that an inflamed tendon may end the Murcian riders Vuelta. 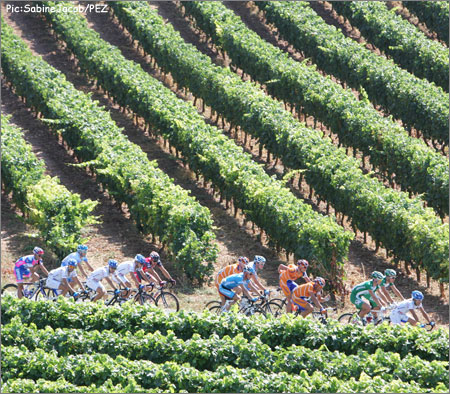 Back to the Race
The three were working well, but their advantage was getting smaller at every kilometer, after 100 kilometers of racing they were under 5 minutes ahead as Lampre, Euskaltel and Rabobank stretched the bunch into a long thin line. The best placed rider of the three was Grivko who was nearly 28 minutes down, so they were no threat to the race leaders overall. The sprinter teams had other ideas as they wanted it all together for the drop into Burgos, the finish today is flat and straight for the last 3 kilometers, but there is a tight right hand hair-pin bend with 500 meters to go that could disrupt the lead-out trains. 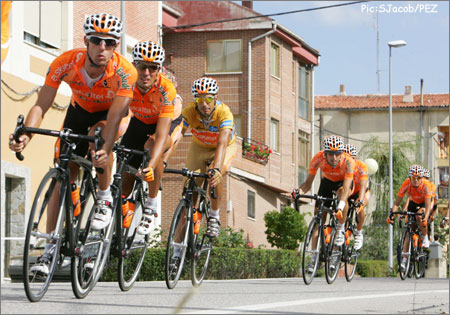 The climb of the Alto de Valmala starts at 138.5 kilometers and is over in 3.3 kilometers, so it shouldnпїЅt even worry the heaviest of the sprinters and no breaks that got away could survive to the fast finish in Burgos. At the top of the Valmala Antonio LпїЅpez had been dropped by the other two but managed to get back to them as they crested the climb 2 minutes 47 seconds up on mountains jersey wearing David Moncoutie (Cofidis) who jumped away for the few points left on offer. 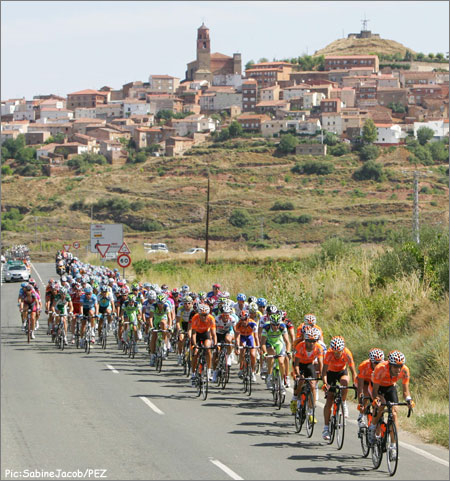 Liquigas had started to help the other teams with the chase work on the run into Burgos, there is an intermediate sprint 12 kilometers from the finish and it looked like our three leader wanted to stay away until then, at least. 20 kilometers out and the three were dangling ahead by 2 minutes and 4 seconds and as usual in these cases it was a matter of time before they were reeled in. On the long straight road through the 15 kilometers to go banner the gap was down to 1 minute and 33 seconds and with good eyesight the hunters could see their pray. Bettini was now doing hard man’s turns on the front, at first it looked like he wanted to take the intermediate sprint, but he just stayed there for a long time and brought the leaders back to 6 seconds with only 7 kilometers to the finish sprint.

As the escapeeпїЅs were caught small groups tried to get away, but they didnпїЅt want to collaborate so it was all together again coming into the 5 kilometer mark. Liquigas, Quick-Step. Silence-Lotto and Ag2r are the main working teams, but just behind them Rabobank and Lampre are looking keen, another ride on the front by Paolo Bettini takes the speed up to 65 kph and Quick-Step are very serious for Tom Boonen to get another stage win. 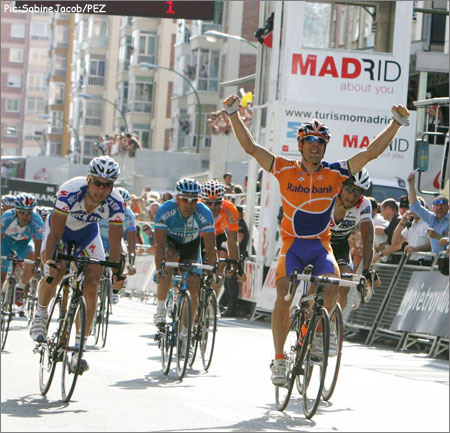 The sharp curve doesnпїЅt cause any problems as Boonen jumps as they come out of it, but he takes Oscar Freire (Rabobank) on his wheel and the smaller rider came round the slower moving Boonen to get to the white line first, sorry Tom! 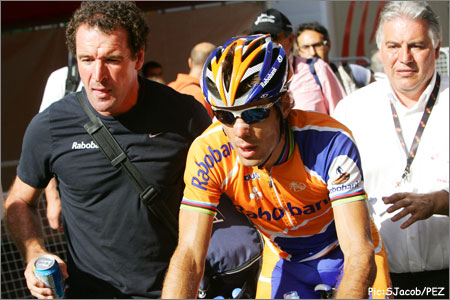 Oscar had his kid on the podium as this is fairly local to his home town and Olympic Champ Sammy Sanchez presented the Gold jersey to his team mate Egoi Martinez. 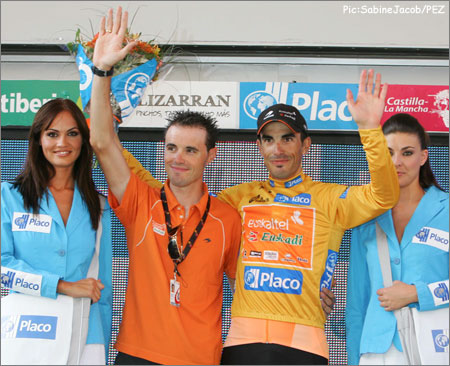 Today was fairly predictable as will tomorrows stage to Suances, the stage starts with a few hard climbs but they are too far from the finish to split thing up too much. No changes overall or any of the other classifications.