Only two Category 3 hills were on the course to give anyone any trouble, and with tomorrow’s stage an ITT, it was ripe for an opportunistic breakaway to take a stab at glory and get their sponsor some T.V. time. It was after the first hill, the Cat 3 Puerto de la Chimorra, that Josй Antonio Lуpez (Andalucнa-Cajasur) hit the bricks in search of glory. 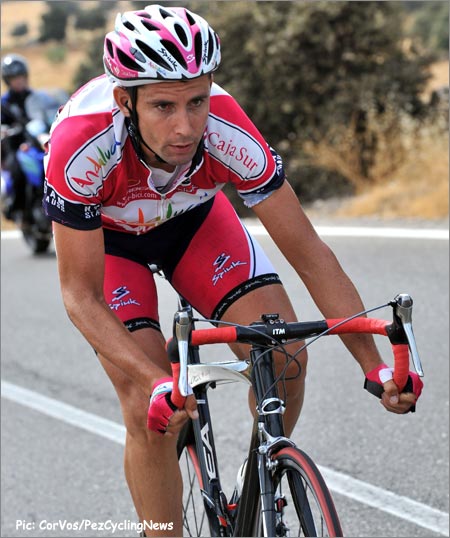 The small team from the south of Spain also had Jesus Rosendo in the KOM jersey, and they dutifully swept up KOM points behind, while their teammate ploughed the lonely trail ahead. Lopez managed a high time of roughly seven and a half minutes out ahead before the sprinter’s teams lined up and picked up the pace a little bit.

The gap shortened up in a hurry, and with 30km and the peloton speeding through the sun baked brown landscape, the gap had come down drastically to 2:13, mostly at the behest of Quick Step, Lampre, and Liquigas.

At 20km to go the Spaniard maintained his lead, and the bunch clearly was in “containment mode”, not too eager to pull him back into the fold just yet. Wouldn’t want a fresh, pesky counterattack to get away now, would we? The group motored along through the flatness, the lone breakaway rider slaved up front to protect his doomed lead. It was pretty clear by 15km to go that when the time was right, the speeds would get vertical in a hurry, and we’d be treated to a bunch sprint. Hats off to Lopez for the brave (but perhaps foolhardy) day alone. His sponsors should be happy.

Massive crowds on the streets greeted Lopez in the last town before the finish, Almodovar del Campo. HUGE crowds in fact, and very vocal! PEZ-Man Alastair Hamilton has mentioned the big crowds in his roadside reports, and today was no different – the locals love this bike race. The last sprint point was also in this last town, and Alberto Contador showed himself to snare the 3rd place points. Interesting. Also, the Euskatel boys were shimmying up to the front, no doubt to get Senor Gil into position to have a go for the line.

Under the 10km marker, and a crashed happened to the mid-rear of the group. A group of about 7 to 10 riders hit the deck, got up, and began chasing. Damiano “Snakebite” Cunego was in the melee. That was to be a tall order to get back on when the speeds were going up quickly. Up ahead, Lopez was in sight with a mere 17 seconds in hand. Day. Done.

4 km to go, and Lopez had dutifully surrendered. The group now had the familiar colors of the sprint teams at the front. Lampre, Quick Step, and Euskatel jockeyed near the point, and of course the Grand Old Man Erik Zabel was in the action as well. 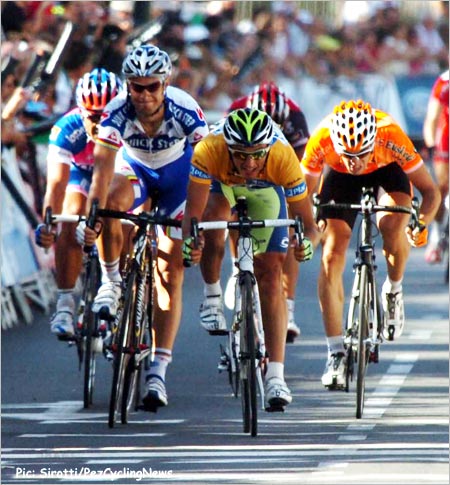 Another wipe out in the group, and the “surprising” Stefan Schumacher was one of the unlucky ones.

Ahead, Quick Step took firm control of the leadout in the closing K’s, with Bettini himself taking a wicked pull towards the end, helping launch Boonen for the line. All the usual suspects were up at the business end of things, but Boonen couldn’t hold the pole position, and the ever-improving Daniele Bennati came up with the goods in the end, taking the prize of the day resplendent in the Maillot Oro! Well done, Daniele!

Toolbox: Best Advice from My Mentors