Race report: There’s been a lot of wailing and gnashing of Italian teeth as the reigning world champ has struggled to pick up the results this year. But wouldn’t you know it? With the road race world’s just around the corner, Il Grillo jumps to the Vuelta stage victory.

Paolo Bettini took out the win in a breathless finish in a UNESCO heritage town better known for its cultural importance. But when you’re eyeballs bulging and lung-shredding, going for victory, you aren’t looking at the pretty buildings or thinking about the history.

After a firestorm of last-minute attacks, today’s top placings are a who’s who of the Vuelta’s stars – Bettini, Gilbert, Valverde, Freire, Bennati. Here’s how things went down. 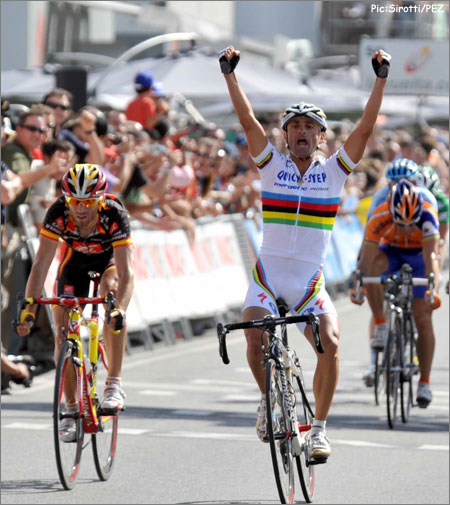 All the action There’s a hell of a train transfer waiting for the peloton tonight – 500kms up towards Saturday’s start town of Barbastro. But there’s the little matter of a lightning fast stage before they get there. Yep, that’s pro bike racing – you race in one environment and then wake up a day later in another one.

Another hot day in the saddle, with a lot of mechanicals, punctures, falls and narrow roads – this is more like a Grand tour as we know it. If you hit trouble at the business end of the day, you’re going to be finishing on your own.

The stage profile was gradually creeping upwards to the top of the day’s only mountain at 102kms. Then a snappy, steep descent into Toledo, followed by one nasty, sharp hill on the finishing loop.

It’s a day for a poker player, a rider prepared to wait for the bunch to look the wrong way in the closing kilometres before taking a chance. 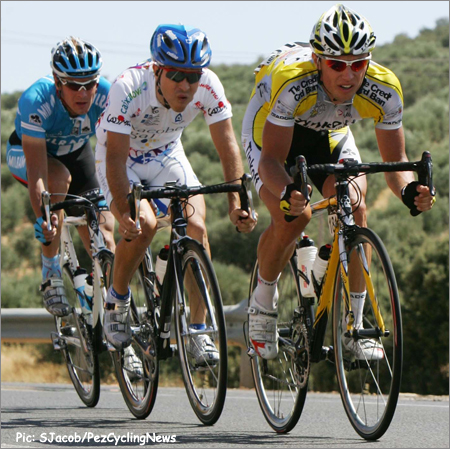 Folding early, and showing their hand were today’s three breakaway musketeers: Iban Mayoz from Xacobeo-Galicia, Volodymyr Diudia of Milram and (inevitably) Mikhail Ignatiev from Tinkoff (above). They gave it their best, but never getting beyond 3 minutes 30 seconds clear, it was a doomed affair from the very get-go. No way was the bunch going to let them go on such a short stage.

A strong cross-wind early on made things a bit jittery in the peloton and a crash briefly felled Alejandro Valverde, but he bounced back up and seemed unscathed. Tom Boonen hit the pavement too and dropped back to the doctor’s car to get his bloodied elbow checked out. 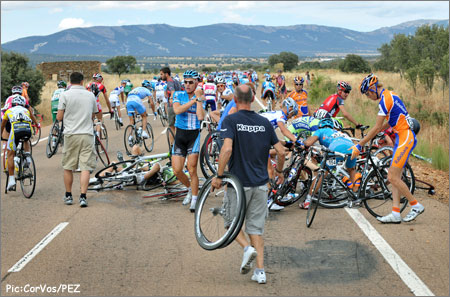 They fell down a few times today.

Another tumble clattered Bouygues Telecom’s Stef Clement and, for the umpteenth time in the race, the current Aussie champ Matty Lloyd.

Astana and Cofidis were on the front keeping things watertight, especially the French team, as Chavanel was only 2 seconds out of the leader’s jersey. He’d boldly predicted he was going to give it a dig on the final lump about five kilometres from the line, so his equipiers were making sure he got the chance. 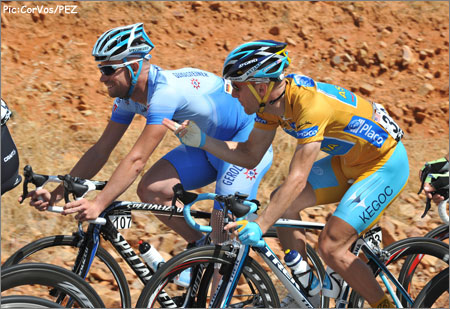 Diudia had bailed out of the break before they crested the only climb of the day, the cat-3 Puerto de Marjaliza, which was taken by Mayoz ahead of Ignatiev. By the time they hit level ground again, they’d been hauled in.

Astana graciously sat off the first sprint meaning that Chavanel steamed through unchallenged to grab the precious bonus seconds, with Duque and Nuyens acting as enforcers immediately behind. That put Chava’ in ‘virtual’ gold.

Valverde’s problems continued with a mechanical … he needed a full-on sprint back to the peloton with just 20kms to go. Then his mechanic had to put life and limb in danger to make some adjustments while dangling from the team car. 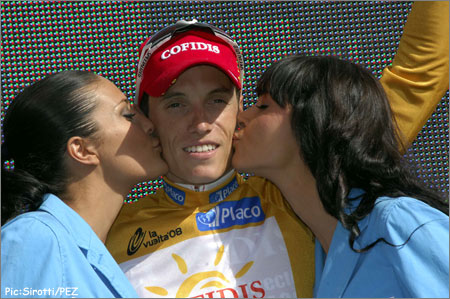 Astana was happy to see the Golden Fleece off of Levi’s shoulder’s and on to Chavanel’s.

Cofidis lined Chava’ up for the next sprint which he took safely, padding the cushion to Leipheimer.

Nicolas Roche and Damiano Cunego gave it an unsuccessful kick on the last climb. Rinaldo Nocentini and Yaroslav Popovych also hit the front, but Caisse d’ Epargne shut up shop for the finish. Behind the main action, a lot of guys were shelled out by the high pace.

Tinkoff’s Vasil Kiriyenka ploughed away in the final kilometre but it was a futile gesture. Bettini, Gilbert and Valverde drew swords and fought it out for the win – they finished in that order, but it was close. Real close. 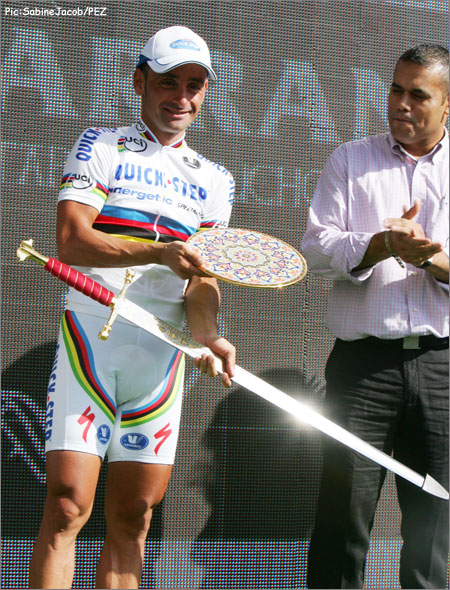 Winning in Toledo has its merits – Bettini has protection at the hotel tonight.

QuickStep will be delighted with another stage win, but not as happy as Bettini will be. Also, pretty chirpy tonight will be Chavanel who goes into tomorrow’s rest-day press conferences with the leader’s jersey on his back. 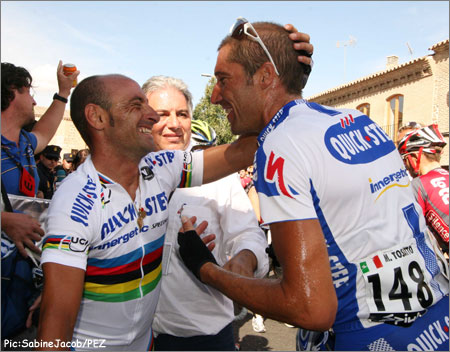 It was a happy day in the QuickStep camp!

Keep it dialed to PEZ as we cover all the roadside action from this weekend’s mountains foray.