Race report: Yeah, what goes down must always go back up again, it’s the natural order of things. So, once the peloton trundles downhill from Andorra, it’s only a couple of pulls on the brakes until they’re grinding back up again. Ballan has admitted he’s got no chance of hanging onto the lead today, so who’ll take over…?

It’s been a while since he won big, and maybe it would have been a shorter wait if he’d got his finger out of his posterior, but today’s podium girl hugger is the undoubtedly talented David Moncoutie.

The Frenchman went solo out of a five-man break and hung on as the overall contenders decided to start racing. Contador spent a few matches failing to distance the field while Valverde and Anton had good days. Carlos Sastre also comes out with his account in credit after rescuing what looked like a disaster on the final climb. 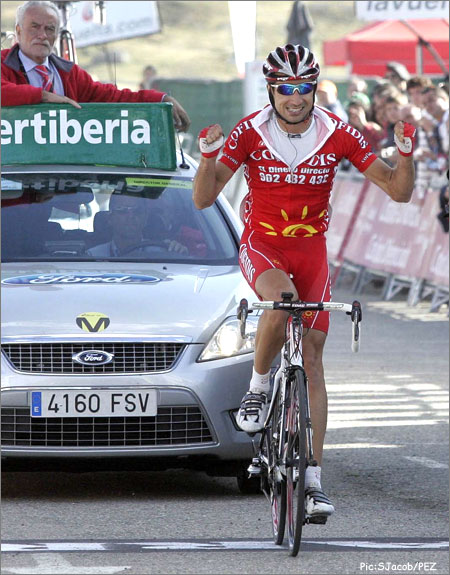 We got a glimpse of the Moncoutie of old today as he won atop the Pla de Beret.

Earlier at the Vuelta …
After yesterday’s sodden slog into Andorra, there was a nasty follow-up in store. The 1st category Coll del Cantу at 1725m; the 2nd category Alto de Enviny at a trifling 1225m; then two 1st category stings in the tail. The Puerto de la Bonaigua at a cloud scraping 2070m, with the final spike to Pla de Beret at 1860m.

After Alessandro Ballan’s brilliant breakaway succeeded yesterday, others had the same idea today. If you can hit the top of the penultimate climb with a handful of minutes to spare, you might just hang on to Pla de Beret.

Those opting for that very tactic, stepping out from km 38 were David Moncoutie from Cofidis, Christophe Kern for Credt Agricole, Nikita Eskov (Tinkoff), Seb Joly of Francaise des Jeux and QuickStep’s Juanma Garate. 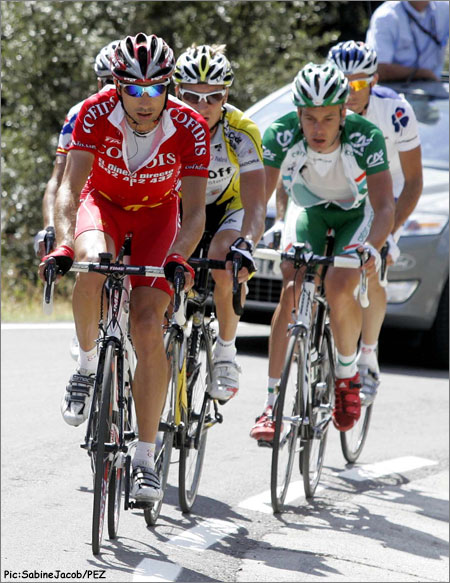 They succeeded where a whole host of attempts had failed – Kern and Moncoutie had both tried earlier. Astana had to react to a move from Sylvain Chavanel, and we’d also seen Damiano Cunego trying to get away. Once today’s famous five were over the top of the Enviny though, the gap made like Marlon Brando’s mid-life trousers …. seriously started to stretch in other words.

At least the riders could see where they were going today, as the sun was back out, unlike yesterday’s downpour which would have made Noah feel at home. Average speeds were pretty leisurely for the first couple of hours – around 32kms/h, so a relaxed Sunday ride for some sheltering in the peloton.

Once again, it was Astana who took charge of affairs and started to close the gap down from it’s max of just under 5 minutes and 30 seconds.

Inside the final 40kms, Matty Lloyd, the Aussie champ, paid his habitual visit to the deck in another thumping crash. Again, it didn’t seem to be his fault, but he crawled out of it bloodied and battered.

Let the madness begin!
The Puerto de la Bonaigua also started to hurt the peloton as it started to look like a sprint finish was imminent – things thinned down dramatically and we had a long line as first Astana and then Euskaltel flicked the switches.

Mid-way up the climb, Moncoutie moved away alone and crested the top solo. On the descent, most riders were taking it very easy on an abysmal road surface. All except Sebastien Joly who flew down to get on terms with Moncoutie.

Then it was straight up again, as the Pla de Beret started. A group of about 30 hit it behind Moncoutie. Astana were mob-handed with Rubiera, Kloeden, Leipheimer and Contador. They put the pedal down … and Sastre was dropped.

Suddenly the Tour de France champion was isolated. He had team-mates ahead but they didn’t seem to be dropping back to help. But Sastre is an experienced guy and he gradually clawed himself back.

4kms to go and Alberto Contador jumps! Valverde went with him, Igor Anton chases, Sastre has another mini-crisis but gets a hand from Robert Gesink. 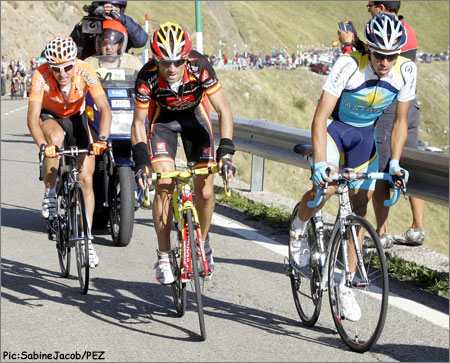 3kms left and Contador goes again – Valverde follows, but Anton struggles to get back. Caisse d’ Epargne have a number of guys in the main group so Valverde knows he’s got back-up.

At the front, Moncoutie is still ploughing away, praying that Contador’s war games don’t screw up his stage win chances.

2kms left – the main climb is done. It’s flat then downhill for Moncoutie. A frustrated Contador tries again, but he can’t shake off Valverde and Anton. 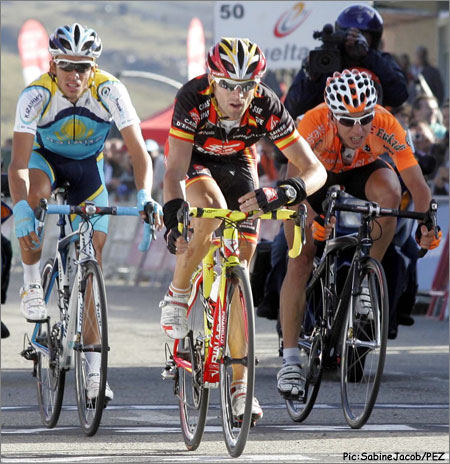 Valverde swiped the second place bonus seconds on the line.

Chasing just behind, Mosquero and Moreno, Gesink and Sastre come together. But the road is tilting the right direction for Moncoutie and he holds it together until the line to take the stage.

Moncoutie deservedly wins after a brilliant long-range effort and pockets a handy Ђ11,000 for Cofidis. Contador cuts a bit of a fed-up figure – all that effort and not much gained. He even gets done over in the sprint for the bonus seconds by a sneaky/clever Valverde. Sastre hangs in and loses just a handful of seconds. 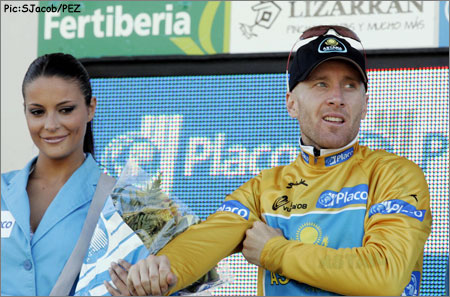 Levi Leipheimer resumes the overall lead ahead of Contador – that should make things interesting at the dinner table tonight.

More good stuff from the Vuelta to come – Eurotrash will keep you up to speed tomorrow with all the happenings. Don’t touch that dial!