Race report: Welcome, welcome, one and all, to La Vuelta 2008! As usual, it’s a hot, sunny and super fast start to the last Grand Tour of the year. We kick things off with a 7.7km Team Time Trial around Granada: pan-flat and very twisty.

Sign up NOW to see all the racing Live on Cycling.TV

It’s a day for the technicians and good bike handlers rather than for the juggernauts and steamrollers that smash their way around a TT course.

Although there are as many twists and turns as a TV detective series, the profile is so level today it looks like a flat-lining vital signs monitor for a TV medical show. No danger of a lifeless opening here though, with a TTT to kick off La Vuelta! With the teams hammering at 55 kms/h, we should see a winning time somewhere in the 8 and a quarter minute realm. 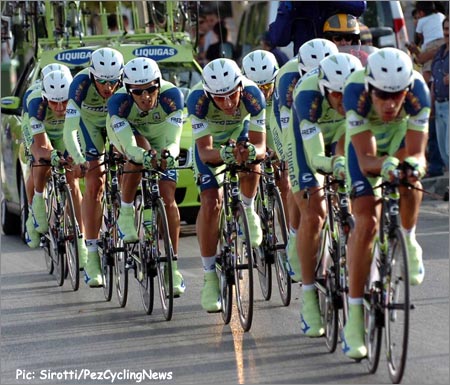 Liquigas green streaked it to a fine first place.

Stages of the Vuelta have started here 21 times before пїЅ the last time was in 2005 when Denis Menchov won the prologue. The two-time Vuelta champion has fulfilled his Grand Tour quota for the year already and the Russian’s place in the Rabobank squad is taken by the upcoming Robert Gesink.

Let The Madness Begin!
First out of the starting gate is Andalucia-Cajasur and they hit trouble straight away a touch of wheels and they’re two men down (Moreno and Carrasco) before they’ve barely got up to speed. Tinkoff stay upright and note a fast time (8 minutes 33 seconds) as Milram come up just short.

Silence-Lotto are all over the shop and lose four of their team before they limp over the line. The first day of a Grand Tour is nervy at the best of times, but when it’s a TTT on tight bends, well ……

Any lapse of concentration, or too much aggression, and your race can be all over in a flash. Roy Sentjens and Bart Dockx come home over a minute behind the rest of their buddies.

Rabobank fly round the course with no significant problems, but they trail Tinkoff by a second on the line. It’s up to QuickStep to set the new pace, 8 minutes 31 seconds, led home by Boonen and Bettini.

Daniele Bennati is on a mission after missing the Tour de France and he whipcracks his Liquigas team round. The time is taken on the fifth rider over the line and they finish with six together. Pippo Pozzato is the first of them to cross and the time is enough to cream 10 seconds off the QuickStep time and put them in provisional pole position.

Lampre trundle through in 8 minutes 40 seconds which isn’t going to trouble Liquigas today, but should keep Cunego within touching distance. 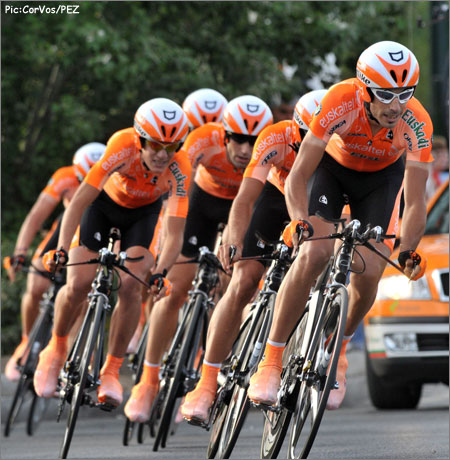 On the night, the next teams Gerolsteiner, Francaise des Jeux and Xacobeo-Galicia don’t trouble the headline writers too much. Euskaltel do a decent job posting second-fastest to Liquigas while Credit Agricole …… don’t. Cofidis are similarly off the day’s pace.

With these teams all home and dry, the ‘bigger’ guns are starting to fire: Caisse d’ Epargne (Alejandro Valverde as leader), CSC-Saxo Bank (with Tour de France champ Carlos Sastre in charge) and Astana (the three-headed Contador/Kloeden/Leipheimer monster) are rolling at full speed …

Valverde’s boys do a good ride for a provisional third fastest, and they’re followed home a little later by the much slower Bouyges Telecom. 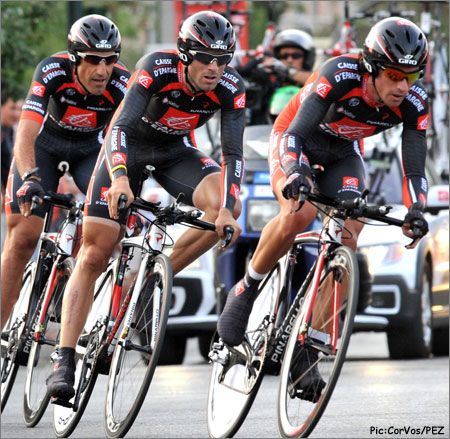 Astana surprisingly fail to top Caisse d’ Epargne even with the combined TT power of their three leaders plus Noval, Muravyev and Rubiera it’s just a five-strong cluster that reaches the line together. Sometimes too much strength is a bad thing if there are weaker links that leave gaps in the chain.

Ag2r roll home in 8 minutes 41 seconds, leaving just CSC-Saxo Bank out on the road. Sastre’s boys do better than Astana, just, but only enough for fifth on the day. Alejandro Valverde will be the happiest of the overall contenders, but the biggest smiles will be for Liquigas. 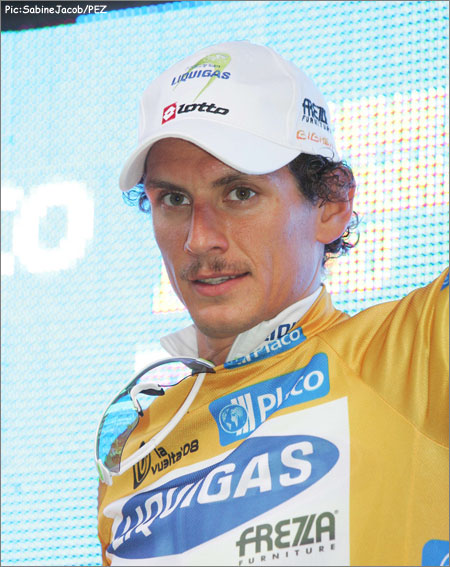 Filippo Pozzato pulls on the maillot d’ oro for the first time. Being capable of getting over the smaller hills, he should be odds-on to survive tomorrow’s third-cat climb and keep the lead for a few days. And if he doesn’t, Bennati can take over.

Keep it Pez for all the latest news from La Vuelta. Our man Al Hamilton is roving the roadsides to bring you the tastiest gossip, we’re back for stage two tomorrow …. and Eurotrash will keep you up to speed on the behind-the-scenes back stories. Don’t touch that dial!