PEZ Roadside St.15: Boonen just laughs at my opening gambit; “Tom! You look great! Your tan is perfect!” After all the QuickStep man is one of the greatest riders on the planet, he’s also a nice guy. PEZ was at the start of stage 15, Cudillero to Ponferada to get rider reaction to two tough days – the Angliru on Saturday and San Isidoro on Sunday.

Tom tells us: “The Angliru is something every professional should experience at least once in his career, not every year, but at least once. With everyone on tiny gears – I was on 34 x 28 – it’s not possible for big time gaps to open up, so it doesn’t have a huge effect on the overall, but it’s a great experience” 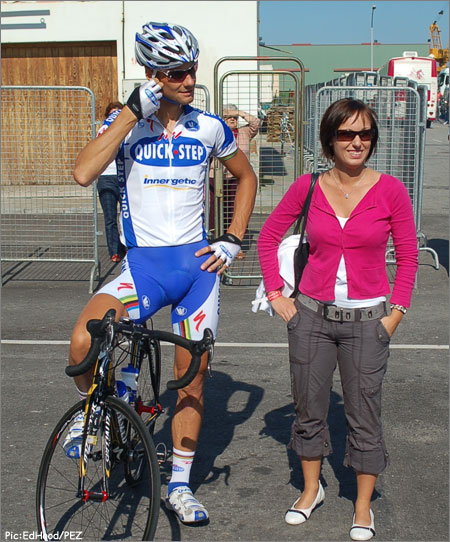 And the Worlds? “Yes! I’m very happy with my form; I will ride today and two more stages then go home to make final preparations for Varese. The next three stages will be for breakaways, I think. It would be possible to control them and have them end in sprints, but results are not the ambition; preparation for the Worlds is what I am here for.” 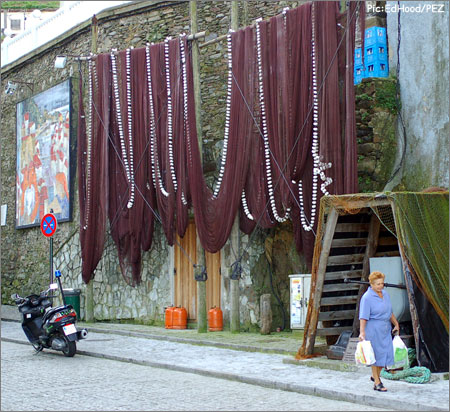 Nicolas Roche (CA) was lying an excellent 14th overall at 19-31, when we spoke to him at Cudillero; “the Angliru was a fantastic experience; it was hard all day long, a quick tempo and I had to battle hard for position on the second last climb to make sure I was in the right place for the approach to Angliru.”

Was there a plan for the Angliru?; “Plans are all very well, but it eventually comes down to following the other guys. The Angliru is a difficult climb, the gradient keeps changing so there are a lot of gear changes; my lowest gear was 34 x 27. You’re in the saddle, out of the saddle, sprinting some parts and then trying to recover on other parts. I was feeling OK until around two-and-a-half kilometres to go, then it was just a case of getting to the finish.” 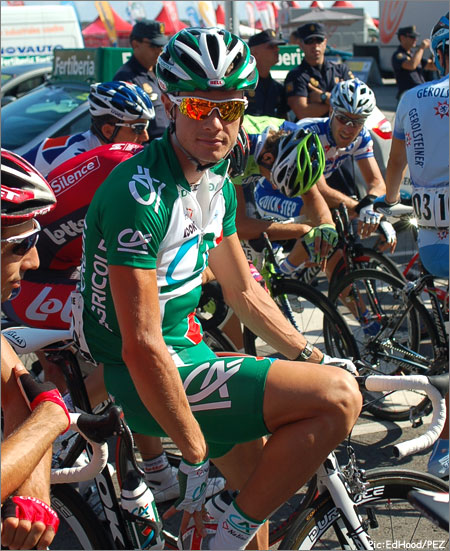 How was San Isidoro, yesterday?; “I felt empty before the start, I just wasn’t sure of my recovery after the Angliru stage and thought that I would go with the early break, so that if I slipped back, it would be from the break, not through the peloton, which would have been very bad for morale. As it was, I didn’t make the break but after the feed, I started to feel better and as I ate more food, I could feel my strength coming back. The San Isidoro was a beautiful climb, it was nice countryside, you’re conscious of that because you’re always looking ahead to see what’s coming up; I rode it at a pretty steady tempo (Nicolas was 19th on the stage at 1-59).” 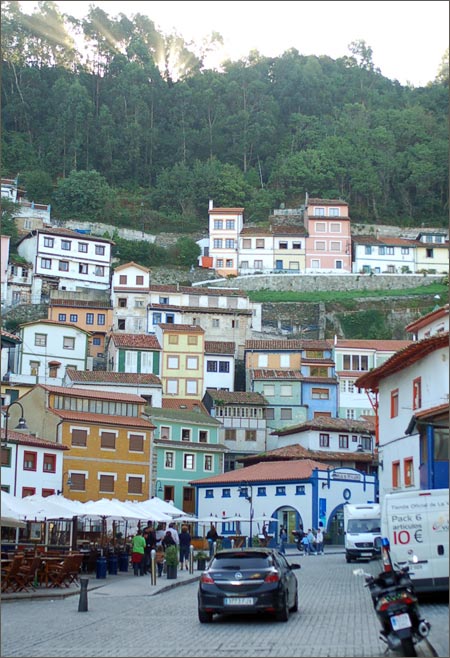 And from here to Madrid? “I’m very happy with my current placing, top ten is nine minutes away, but if I can stay top twenty, I’ll be happy. The trouble is that there will be a lot of breaks going over the next days and guys who are a few minutes behind me may start to over take me on GC, but I’ll keep my fingers crossed.”

Hard to believe though it is, Nicolas’s CA team folds at the end of this year, but the ink is long dry on his contract with AG2R for 2009. 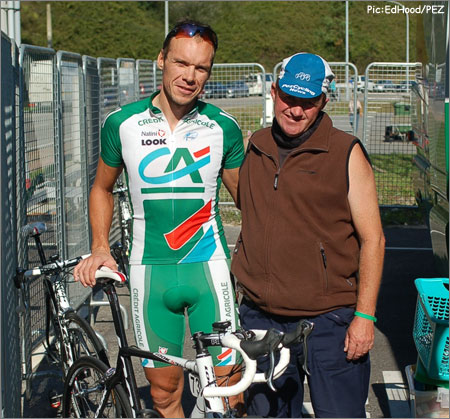 Nicolas’s former British elite road champion and GP Plouay winner team mate, Jezza Hunt has a new team for 2009, but we’re sworn to secrecy on which one.

Jez was recovering from a day when he had a bad tummy and; “suffered like a bastard on the Isidoro!” So, maybe he wasn’t quite as chatty as we’d expected. We reminded him that the last time we’d pestered him was back at Het Volk; “that’s a long time ago! I started the Angliru in the grupetto, but was dropped and rode it on my own; it’s actually better that way – you get more pushes! Up until yesterday, when I had my stomach problems, I was feeling good, I’m hoping to be feeling better today and I’ll be looking for the opportunity to get in a break between now and Madrid. I have the Franco Belge and Paris-Tours coming up, then I’m going back to be with my missus in Australia for the winter.” 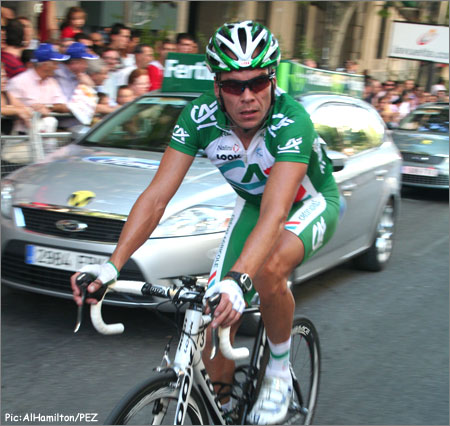 Our first three interviews had no language barriers, but for our final chat of the morning, we had a lot of asking around to do to be able to communicate with our man.

Despite the fact he’s in a “Spanish” equipo, they actually speak Galician to each other on the team bus. 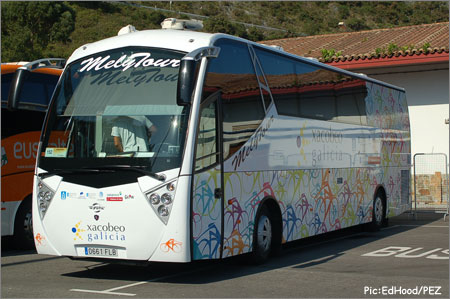 The squad, Xacobeo-Galicia is sponsored by that Region and the team’s title is the Galicean name for the “Way of Saint James,” the ancient pilgrims route from France through the Pyrenees to the Galician capital of Santiago de Compostella. Thousands travel the route each year, bringing much needed revenues to Spain’s most north westerly tip. 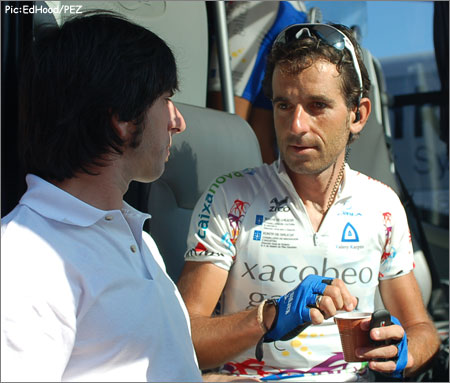 Ezequiel Mosquera isn’t a name you’ll be too familiar with, but it’s all the world’s strongest teams can do to keep the quiet Galician under control. He’s fourth at 4-35, only 56 seconds behind Sastre on GC. He was the man doing all the damage on the San Isidoro and in some quarters there was a feeling that Astana should have let him have the stage. 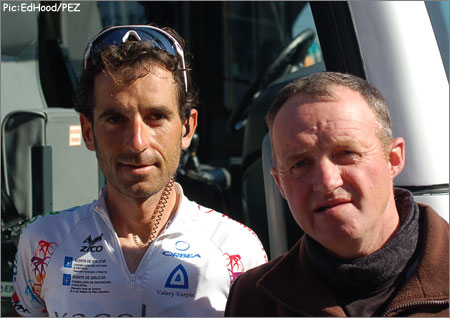 With the aid of Galicia-Xacobeo’s fitness coach, Guillermo Rodriguez Carbduido we managed a few questions from the tanned, laid back man with the look of a trawlerman, who has Carlos Sastre looking anxiously over his shoulder; “I felt very strong on the Angliru, but I ran out of drink towards the end of the stage and was very tired by the top. On the San Isidoro I tried to win the stage and show what I am really capable of. I think it is possible to get on the podium, but Sastre is a very strong rider and it will be difficult.” 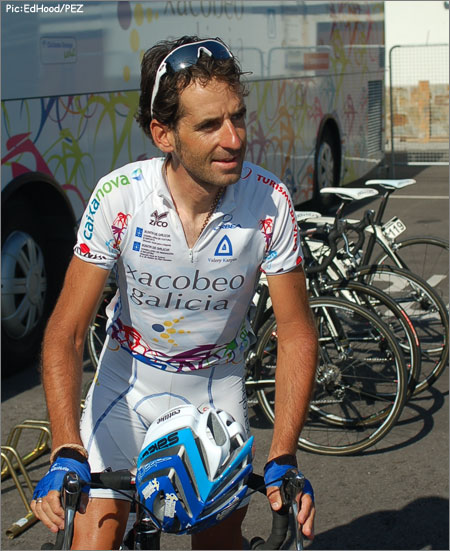 We finished our chat with Ezequiel and said our “thank yous,” just as the troops began to mass for the attack. 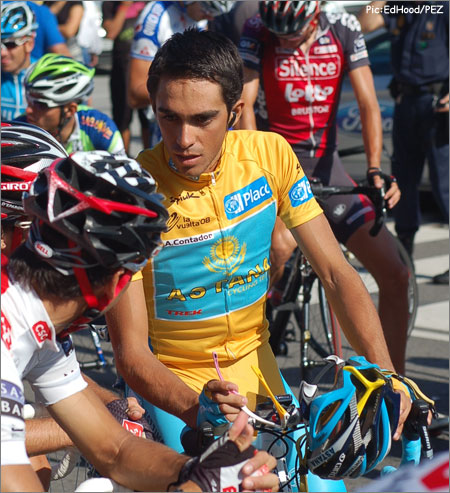 Contador was chatting like he rides – animatedly; Bettini was munching a roll and dispensing banter; Zabel and Kloden were chatting and smiling (wow!); Bruz posed; Valverde yawned and Cunego managed a grin or two. 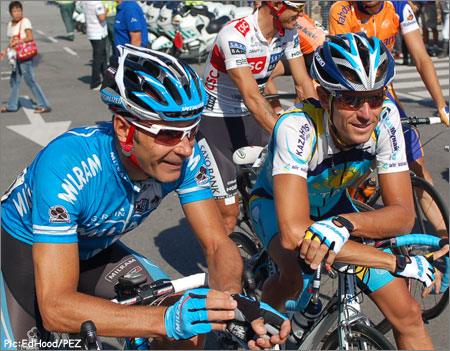 Pez, meanwhile heads east, out of Asturias into Cantabria and a date with our flights home from Bilbao in the Basque country tomorrow, but not before: 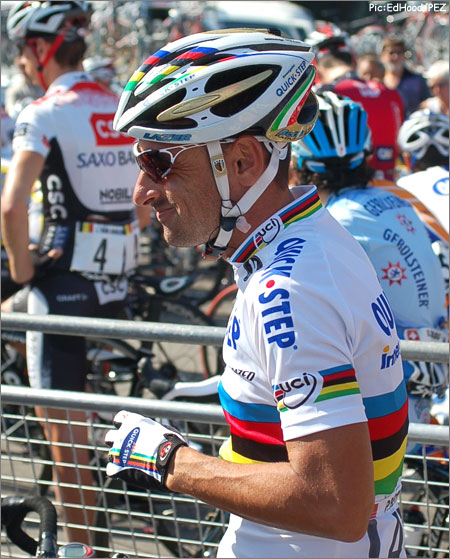 Santillana and the ‘Cafй 2000’ – despite having been in Spain since Thursday, we’ve not seen one minute of the Vuelta on TV.

Davie negotiates with the owner that if we can watch the Vuelta at 4.00 pm, we’ll buy large quantities of beer, coffee and tortilla – a bargain is struck and soon Pedro Delgado’s happy face is on the big screen. 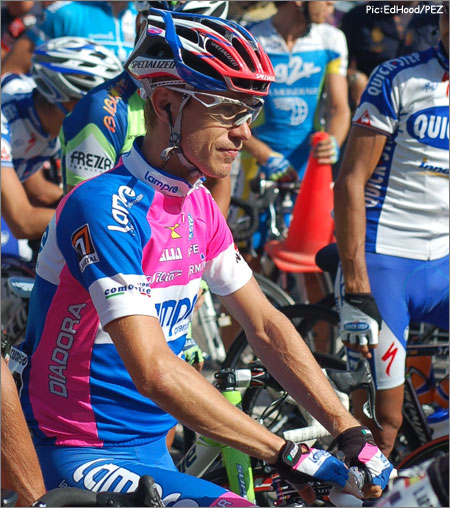 First up we have Alvaro Pino, our boy Zeke’s DS, I’m no Spanish speaker, but the jist seems to be that Astana should have let his rider take the stage.

Cut to Johan Bruyneel, puffing out his cheeks and looking uncomfortable with the questions – yes, I think I’ve got that translation right! 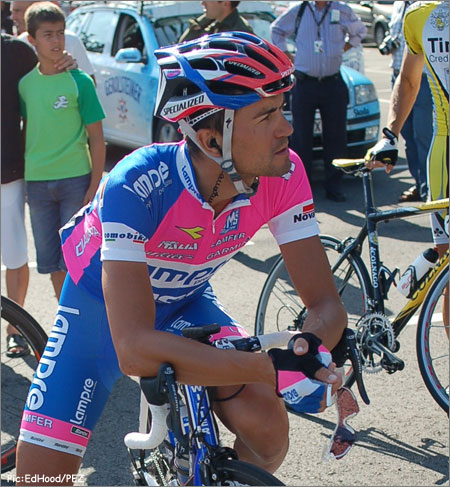 ‘Directo,’ says the screen, and we’re live. There are maybe 12 up the road and 50 K to go. Josй Luis Arrieta goes for AG2R, it’s too far, but maybe the DS has VIP’s on the race and needs TV time?

I’ll get into trouble from Al Hamilton for saying this, but the crowds are sparse. The nature of Spain however, is that much of the population lives on the coastal fringe. The central high plateau – on which Madrid sits as the highest capital city in Europe – is sparsely populated. Drive from Barcelona on the north east coast to Madrid in the centre and apart from the city of Zaragoza, you’ll only pass a couple of one horse towns – and that’s around 500 kilometres.

Arrieta gets caught, Arroyo counters for Caisse; former ‘super star in the making’ Nick Nuyens of Cofidis reacts and suddenly it’s a bike race, but it’s too late for most of Cafй 2000’s customers and we have the big monitor to ourselves.

David Garcia Dapena from our chums at Xacobeo-Galicia times it just right, jumping Nuyens, Arroyo and another man from a big team, QuickStep’s Garate, to get the gap.

They look at each other and feint; they’re all tired, so is the Galician, but there’s the red kite and this isn’t just a stage win back in Galicia – this is the stuff of legend. 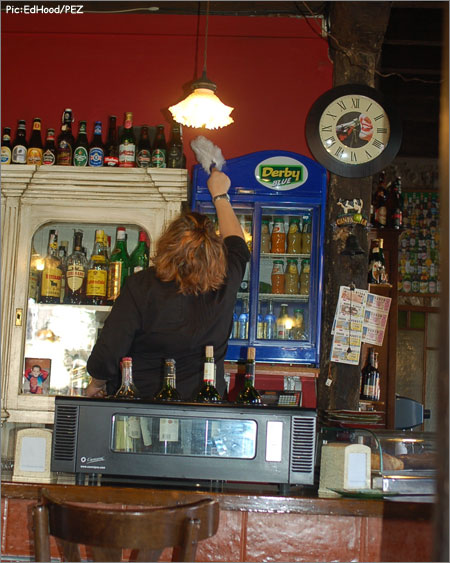 He kisses his wedding ring as he freewheels in; our barmaid can hardly contain her excitement – she’s dusting the shelves.

Time to head back to the autopista and Bilbao. 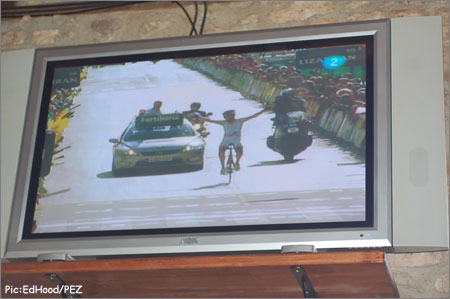 Like the song says, we’ve had; “the time of our lives,” we hope we gave you at least a little flavour of the Vuelta. 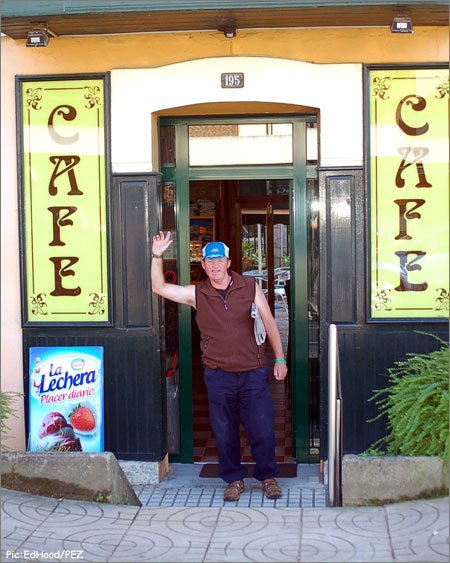 Thank you for reading, and until next time – adios amigos.