Vuelta Roadside St. 1: Under warm Spanish skies the season’s final Grand Tour rolled down the start ramp in Granada today, set to answer some big questions in the next 21 days: Will Contador make it 3 straight? Will Levi really step up? Can Sastre do the double or is it Valverde’s turn to shine? Don’t ask us, but we can tell you where a great little bar is…

Now that I know how to get back to my hotel at night things are a little easier, there was no rush this morning as the first team doesn’t start until 18.45, but I need to go to the “Sala de Prensa” to send last night’s story and photos, an herbal tea and a croissant in the hotel will keep me going for a while. 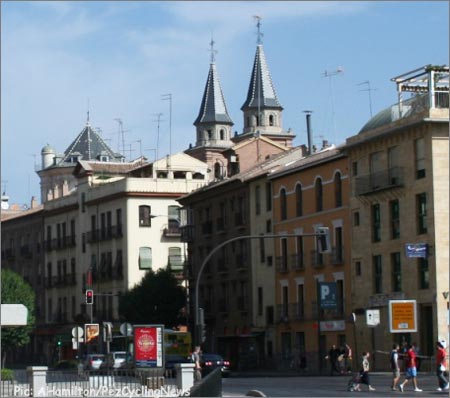 Down at the press office I was the first there as it didn’t really open till 10, but this gave a good start and the story on the team’s presentation was up as quick as a very quick thing thanks to Jered, where ever he is at the moment? [- a race somewhere in Austria – ed.] The best sports daily here has to be AS, especially the distraction on the back page! 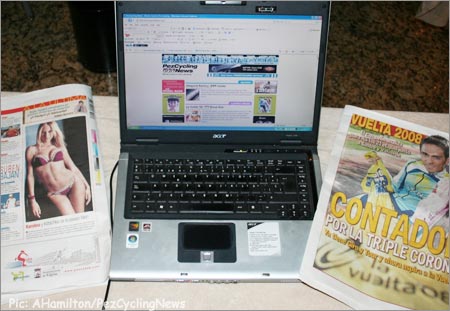 This gave me lots of time to go and take some photos of Granada and anything else interesting. The race start and finish areas were all set up, but there was nothing of much interest, like food or distractions, so an adjacent bar had to be found and what a find it was; a very nice cafй con leche, two pieces of toast with tomato and a read of today’s Marca all for only 2Ђ! I think I’ll be back here for lunch. 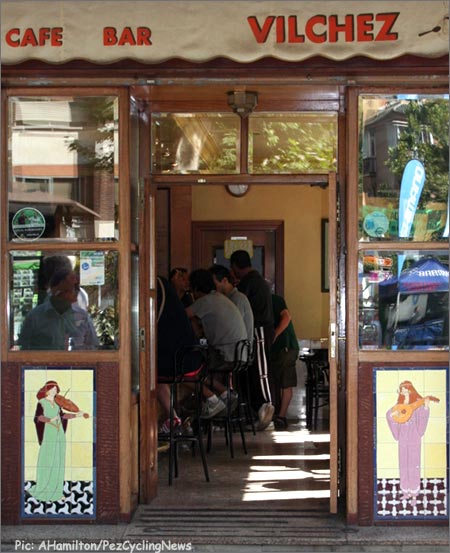 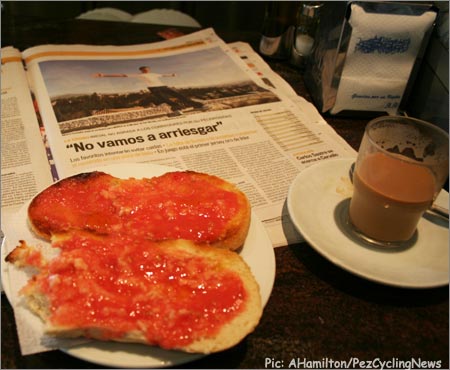 Then I headed back to the Press Office to sort some photos and find out what was going on, still all very quiet, except that Philippe the PR man for Astana Team had seen my article and was jealous because he didn’t get a Vuelta Man memory stick. Nothing else to do, so it must be lunch time?

And lunch was not very Spanish; seafood spaghetti and a coke light and very nice it was too! I needed to have a look at the start village and keep up my score on Daily Distractions, but it seems now everyone is at it and all the girls now look bored with the whole idea. The first year I did them all the girls wanted to know why and where they would go and would preen themselves for the shot, now they can just about manage a smile, but I’m not one to be put off. 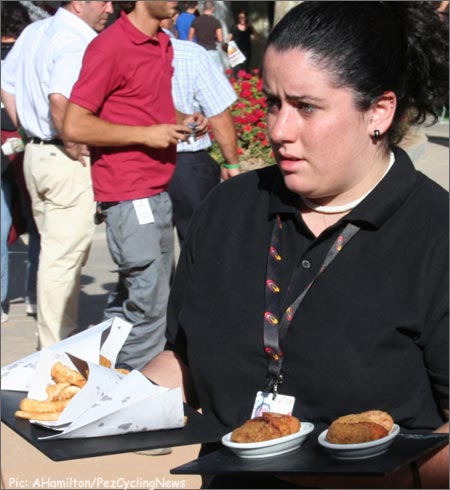 This year there are some new sponsors in the start/finish village, the good news is that the main one is Lizarran, they are a chain of Tapas Bars in Spain and sell very tasty morsels and here of course they are free along with the drinks. Add to this wines from Castilla-La-Mancha this make bike race watching very pleasurable, strangely pears from Rincon de Soto which is in La Rioja, an area more known for its wine production, they are nice pears anyway. 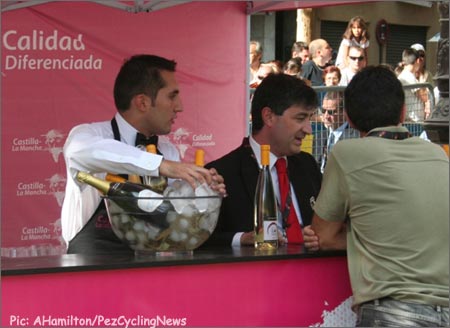 Interesting to see Oscar Sevilla at the start, he is still popular and all the mothers and grand mothers want their photos with him, also spotted a fit looking Dag-Otto Lauritzen, he could probably still win a race or two. 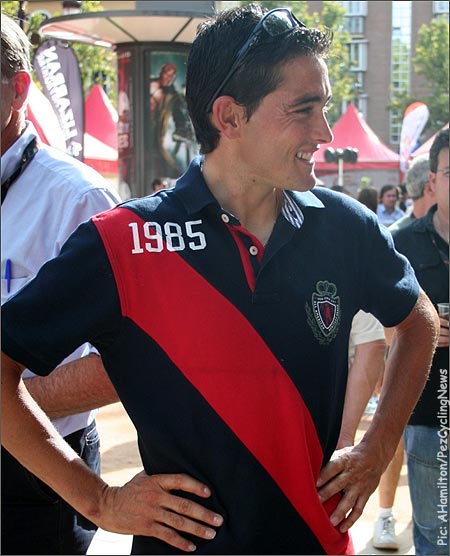 All the teams were warming up around the circuit which by all accounts is crazy, with 12 tight corners and 1 hair pin bend all in 7.7 kilometers and the road surface is like ice some of the riders have said. If you can’t handle your bike and lose the wheel in front then it could be rather embarrassing by the finish line. Some riders can’t hold the pace; luckily none of the contenders were shown up. Oscar Freire (Rabobank) wasn’t taking any chances and rode a normal bike with Tri-bars and a normal helmet, probably a wise choice on this course. 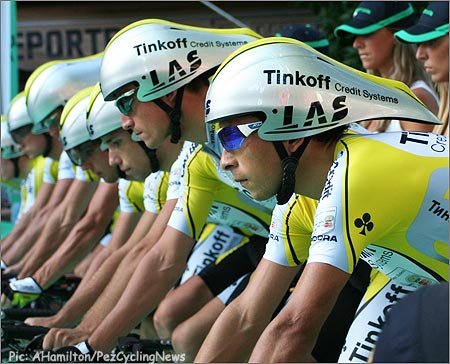 I moved from the start to the tight bend just before the finish, for two reasons, one to get some good shots and two to get nearer my car for a quick get away, which was a bit silly of me as this is an impossible dream. 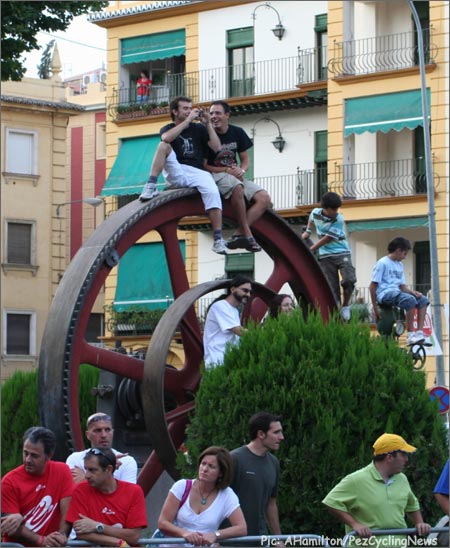 Don’t let anyone say the fans don’t turn out to watch La Vuelta, the crowds were three deep in places and Alberto Contador was very impressed by the turn out and thanked the people of Granada. 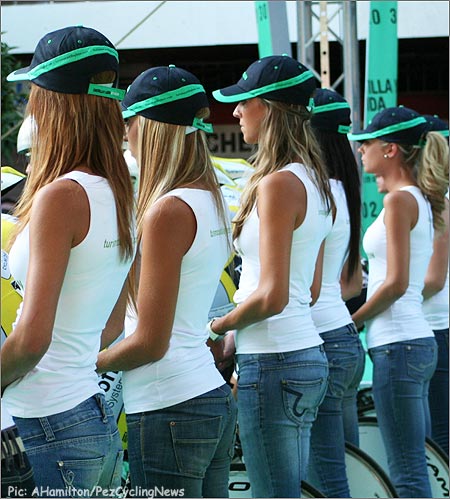 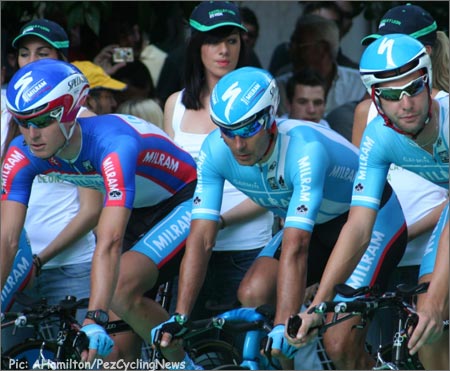 I saw Euskaltel go through, they had been 1 second ahead of the winning Liquigas team at the half way mark and it looked like they had it in the bag as they had 3 seconds on the favorites, Astana, and 6 seconds on the last TTT winners CSC-Saxo Bank. Liquigas did a storming second half test losing two riders and gaining 8 seconds on Euskaltel to give a very happy Pozzato the first Gold Jersey.

Tomorrow’s stage is a little lumpy and may encourage some attacks on its 167 kilometers from Granada to Jaen, it should be interesting as the time gaps are not enormous. I’m off for dinner!