PEZ Roadside St.14: Oviedo is glorious today, the shadows are long on the big boulevards and the sun sparkles on the plumes from the fountains; but on the horizon are those montagnes… It’s gorgeous country and Ed Hood drives the stage 14 ruta…

Kilometre zero, Oviedo and it’s climbing already, ideal breakaway country; rolling, twisting, it wouldn’t take long to be out of sight and out of mind. 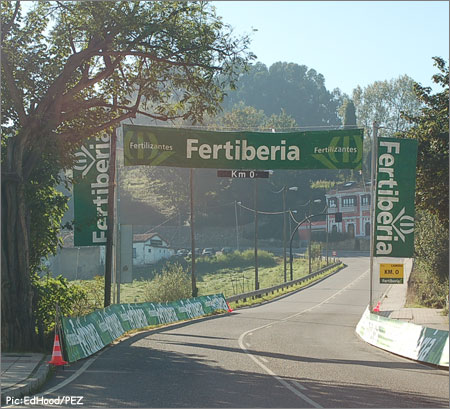 The first climb isn’t too brutal, up to El Padrun, where lies an amazing bar. There’s no sign, just a door and a window, it was originally a chemist’s shop back in the early 50’s. The dust is thick on the bottles and Franco still stares down from the wall. 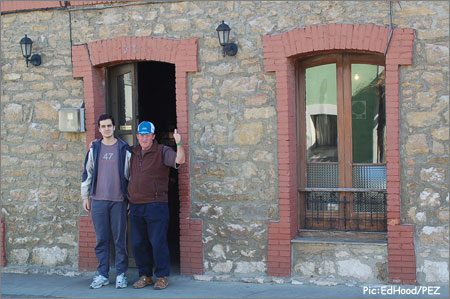 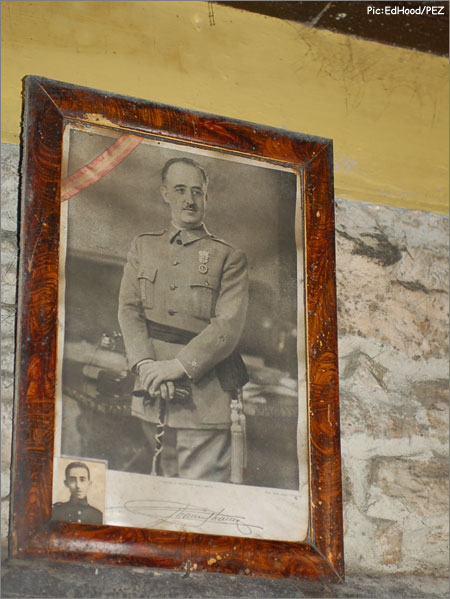 One bottle of cider and we have to go.

The descent starts right away, Asturian forest to the left, whilst across the valley, the Angliru watches and waits.

The Basques aren’t the only ones…

The second climb is the San Tirso, it winds past a red lead painted mine winding tower – we get emotional; it reminds us of Scotland. 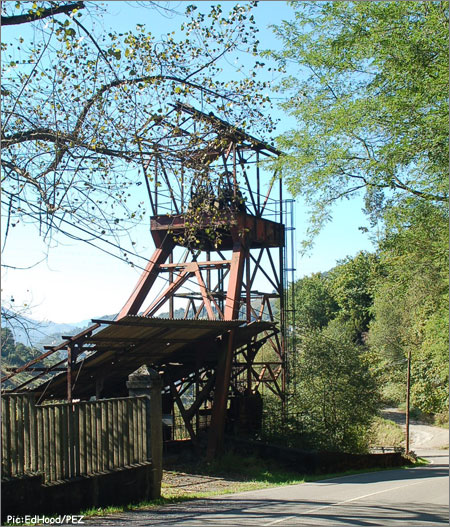 It’s a big ring job, not too severe and it wanders up through sleepy villages. The descent starts right away, through lush deciduous forest to Sotrondio, where the cops tow away cars that are parked on race route. One end of the village is out of a John Wayne movie about Mexican banditos, the other end has hi tech concrete over passes. 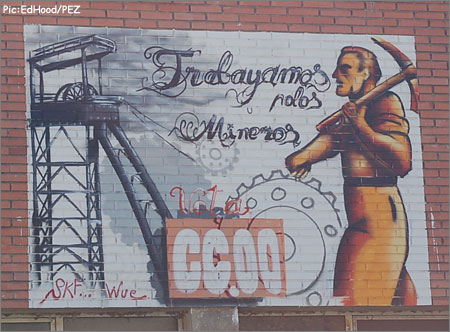 Mieres isn’t glamorous, there are industrial estates, hyper markets and you can never forget the mines – just along the road there’s an underground loco and wagon set beside the road as a reminder of what pays the bills around here. 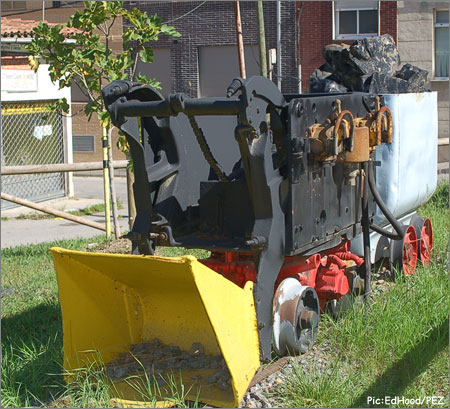 The fourth climb is a ‘real’ one – the cat 1 Colladona; take a 90 degree left and reach for the front mech changer! Earth banks with heather to one side and forest on the other side. 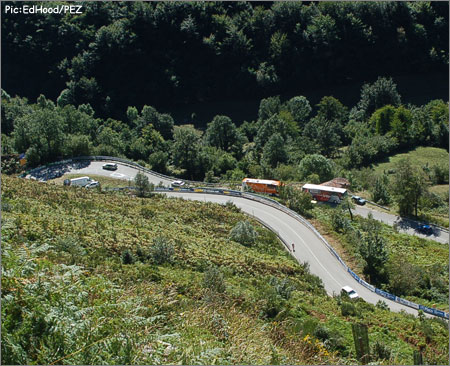 The top is the top, no messing and off down a tricky descent where the sunlight, shade and shadows make it hard to read. A good descender would chew back time here.

The valley road from Laviana to Sotrondio is uninspiring; “any town Espana” with big ‘projects’ for the miners to live in – until the coal runs out.

The Colladiella is the fifth climb, cat 1 and very technical – twisty, turning, narrow. 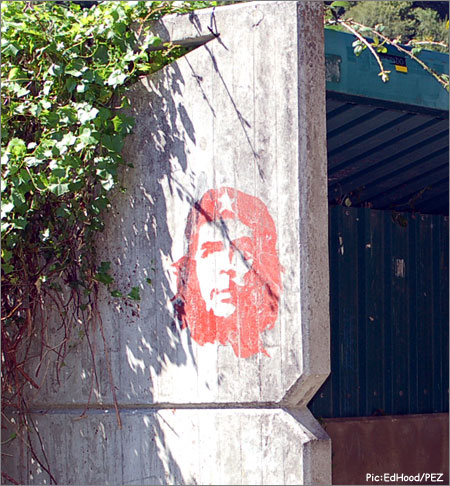 ‘Che lives’ on the bus stop wall as we wind skywards.

The fences up here are of traditional Asturian construction, no fancy lumber, just branches interwoven. It would be a good hill for a break to go on, the line of sight is only ever 50 metres.

The views from the top are wonderful, but the prime banner has collapsed and no one seems that bothered – manana! The descent is long, long, long and demands respect – start dreaming and you’ll end on someone’s roof or in the trees. 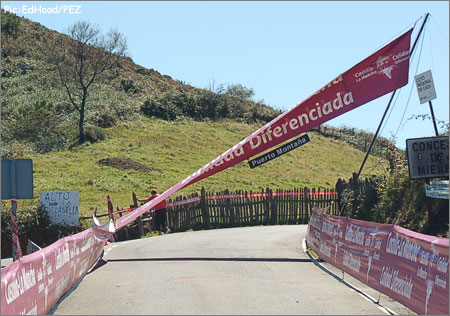 There are more mines before we rejoin the valley road – the Colladona and Colladiella are on a loop, which means that one stretch of pretty boring flat road must be ridden twice.

Fresh roads, and there are dozens of club cyclists headed for the ‘main event,’ the Puerto de San Isidoro.

The gradient is gentle to start as the road follows the river valley.

There’s the press room, 15 K from the finish; a souvenir hunter pinched our ‘press’ sticker off the car whilst it sat at the bottom of the Angliru, and we need a new one. 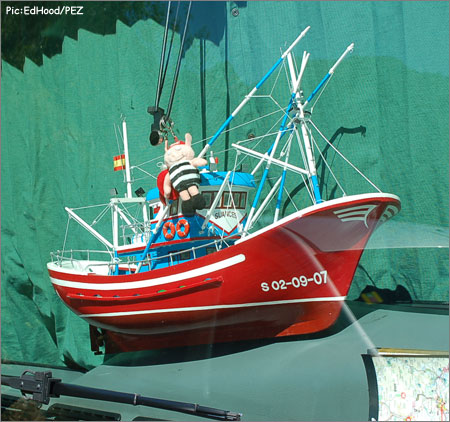 It takes about 30 seconds, if this was le Tour, there would have to be a formal investigation.

With 10 K to go, the peaks rear and there’s the QuickStep bus with a model fishing boat – which Paolo Bettini won at Suances the other day – in the windscreen, not sure if that’s cool or not, I’ll have to ask Viktor. 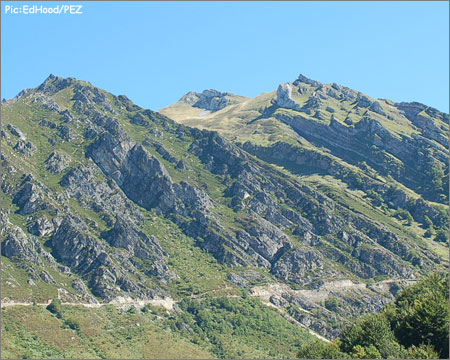 At eight to go, it gets serious, slicing across the valley end and wiggling its way high into another valley further up the scarred rock face – this looks sore; especially the day after the Angliru.

The gradient kicks with four K to go, but at least the road surface is good. The sky is the bluest of blues and there’s only a gentle breeze. 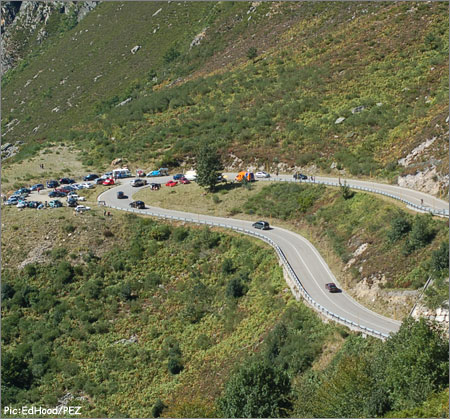 The last K isn’t too steep and the finish is actually downhill – not that we think it’ll be a sprint finish.

There are toilets and a mobile press reception centre, complete with Coke light and tasty nibbles – bliss! 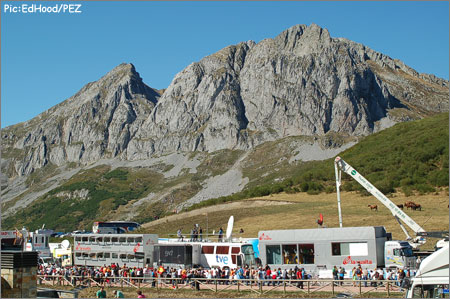 The VIP enclosure has tortilla and more Coke – and a TV. 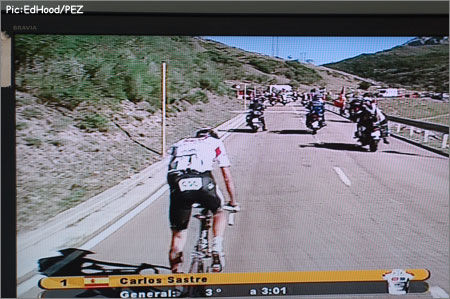 The break is history and the ‘heads’ are fighting it out on the Isidoro at a frenzy, when we sit down to watch the screen.

Bang! Valverde blows, the place has hardly settled down when there’s another explosion – this time it’s Sastre. 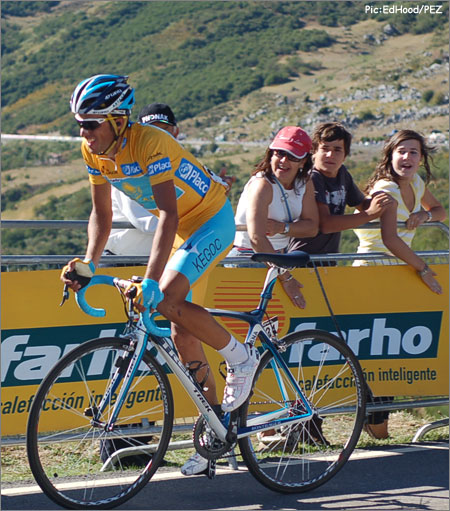 Time to get outside, Bert has been talking to Lance; “no presents!” 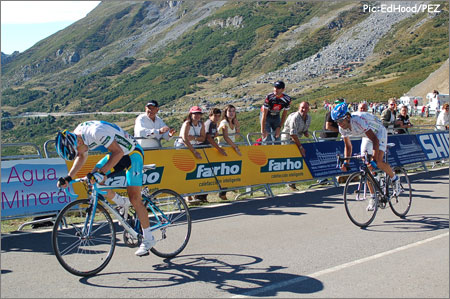 I’d love to have seen Mosquera win, but Levi won’t even let him have second. 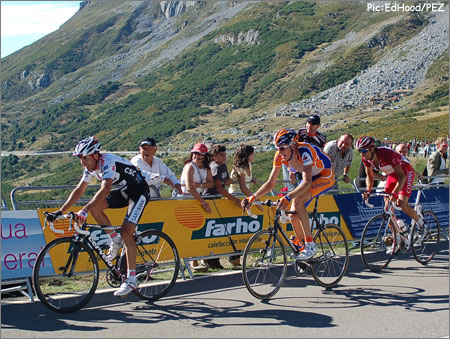 Sastre leads Gesink and Moncoutie in a desperate chase to preserve his podium place, they say ‘thanks’ by jumping him at the end. 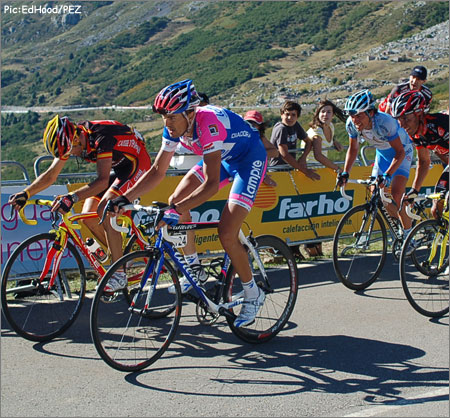 ‘Bruz’ leads the next group from Valverde, Zaugg, Rodriguez and the man who could win stages like this, if he had the right DS – John Gadret. 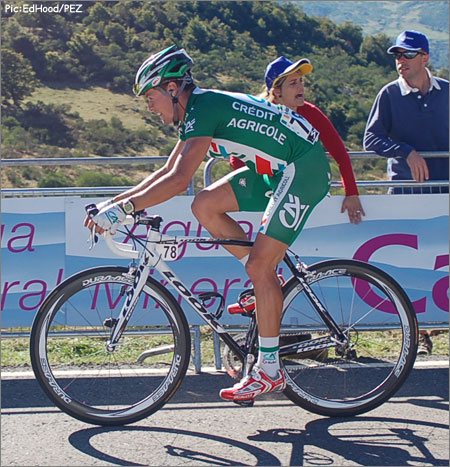 It’s one’s and two’s ’til the autobus arrives, with Bettini right at the back – maybe he’s wondering what the hell he’s gong to do with that model? 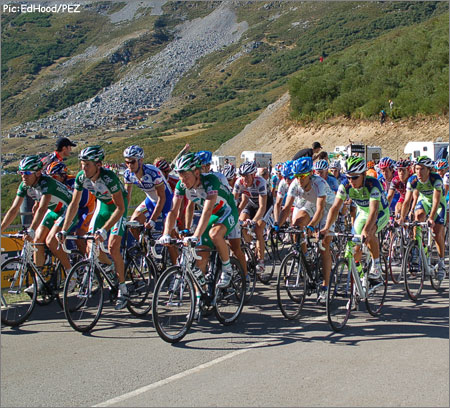 As soon as they are finished, the riders slip on a cape and leg warmers and head back down to the buses – against the race; a tad dangerous, but that’s just how its done. 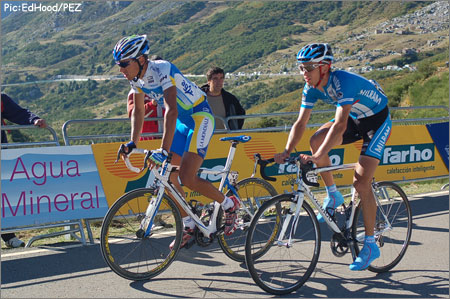 More little groups appear until Poulhies and Gajek arrive; it’s not that Alex, the sag wagon driver wants to get finished, but he’s two centimetres from their back wheel!

If proof was needed that Contador is currently the world’s best Grand Tour rider, he provided it today.

Levi? He’s wondering what he has to do to win a Grand Tour. 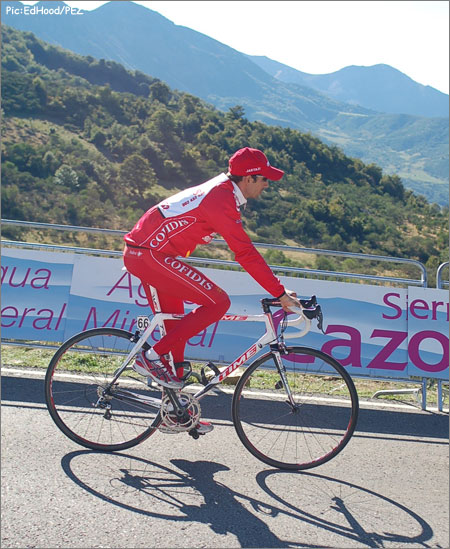 Another solid day for Moncoutie as he heads back down.

Sastre wishes it was next Sunday and he could go home. 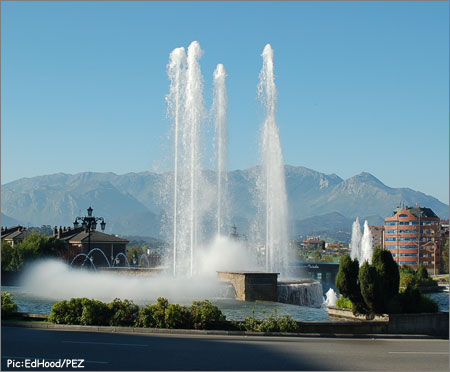 We’ve got to drive 100 K back to Oviedo, find the hotel, park the car then find a pizza place – but it’s still only 9.00 pm here in the press room.