Vuelta Roadside St. 3: Things can go wrong when you’re following a stage race: sometimes it’s just a miscalculation and other times it’s just a case of not reading the map properly, not once, but twice. Stage races are like swans, all graceful as they glide by, the reality is that below it’s all going like crazy to keep things moving.

After the stage in Jaen I finished in the press room at 9.00 pm, which is fairly early and thought my hotel was only 10 to 15 kilometers away, wrong! It was nearly 60 and the road wasn’t the best, so I was looking at an hour minimum. In the end it was worth it as the village of Baeza was very nice, it’s an old medieval village that was very run down a few years ago, but since then most of the buildings have been gutted and rebuilt from the inside preserving the exteriors. When I arrived in the village there were hundreds of people just walking around the square, when I asked what this was all about, it’s a case of taking in the fresh air in the evening after another hot dry day; it had been 35єC across the land. 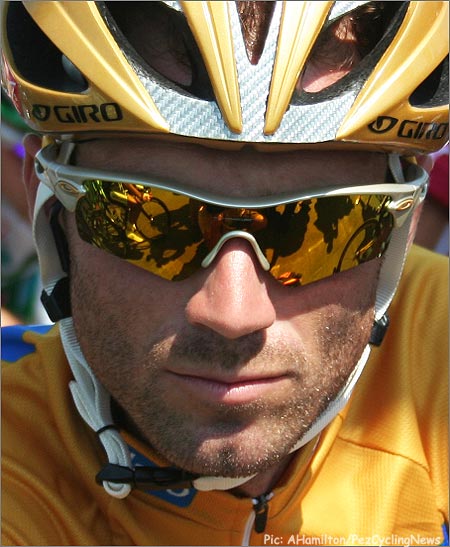 Valverede looked cool as gazpacho at the start.

Now dinner was calling me and the recommendation from the receptionist at the Baeza Monumental Hotel was the La Gуndola, sounds Italian, but wasn’t. The plates were enormous and the food was very tasty, the starter was a gazpacho in a Cordoban style; this was a cold, thick tomato soup with small pieces of jamon Serrano and a sliced boiled egg. The main course was Lomo al La Gуndola, this was a pork fillet covered with a pepper sauce of walnut and raisins, small potatoes and carrots, and three things that looked like tortellini filled with a rich mix of pate and a strong cheese. All this washed down with a nice Rioja didn’t leave space for a dessert and as it was past midnight, it was time for bed! 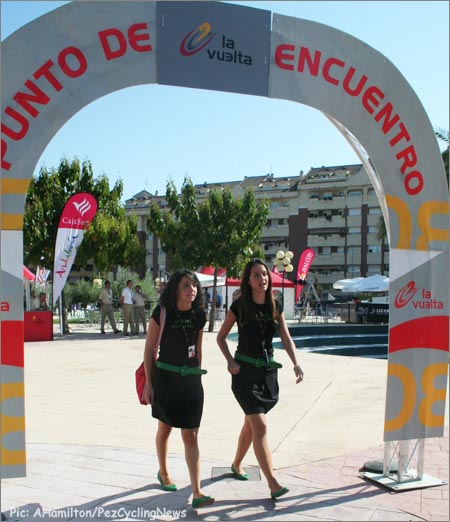 The start in Jaen was hot, but a cafй con leche with a croissant was only Ђ1.80, so the world was good. The start area was quiet to begin with until the girls started to arrive and set up their stalls. The girls at the pear stand were giving away their juicy products and the other girls were just looking good, which is what they are paid for! 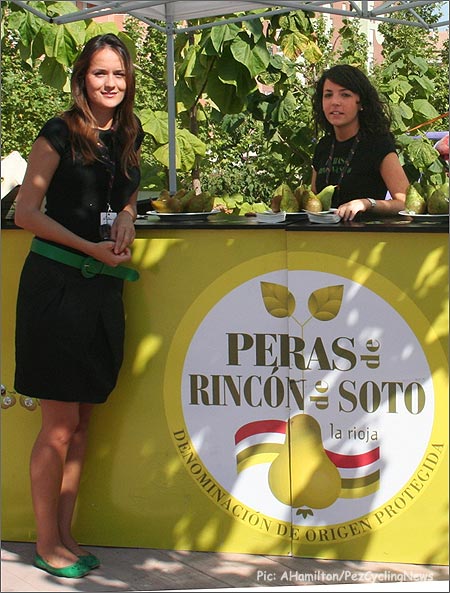 They remembered me as they had seen their photos on PEZ last year when they were podium girls; it’s nice to know that the girls are happy as was Pierre of Pietro & Ducos with his photos on the podium the day before, where is my polo shirt? 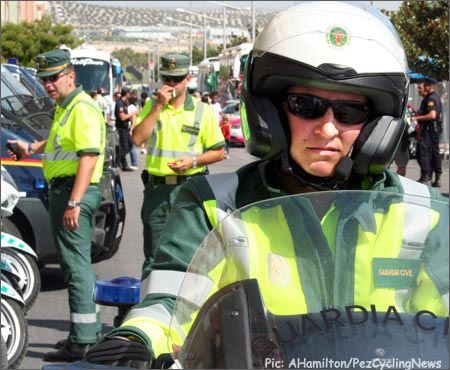 I also spotted the only female Police Moto rider, she looks tough, and I don’t think you would mess with her! 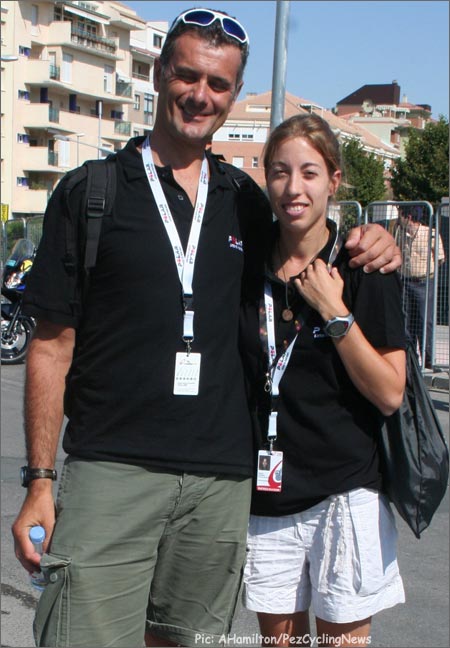 As the riders started to arrive I bumped into Eros Poli who works for Polar HRM’s. he looks as fit as when he was racing, this year he had Vanessa from Cadiz to help him, they had read-outs from some of the riders monitors which made for interesting reading and one of the reasons for the riders high pulse was the late attacks from Nicolas Roche. 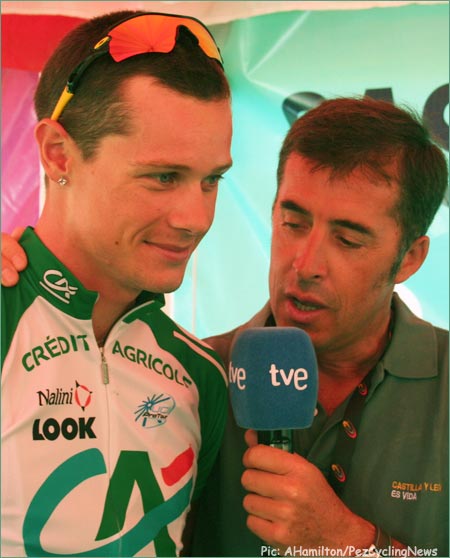 The Spanish TV company, TVE, had set up an interview between Nicholas and Perico Delgado, the interview started with “this is Nicholas Roche, the son of Stephen Roche, one of my biggest adversaries in my career.” 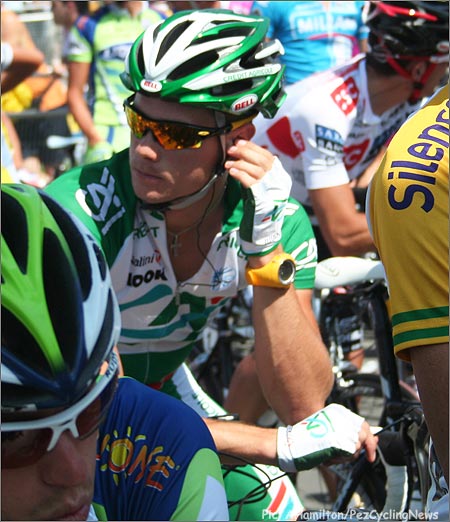 I managed to get a good quote from Nicolas; hey Nico, what was all that about yesterday? “I had to do something for those Irish people watching the afternoon TV!” Yea, but you attacked and then attacked again and then got 11th in the sprint! “It’s what I’m paid for!” OK, but I didn’t see anyone else doing it! 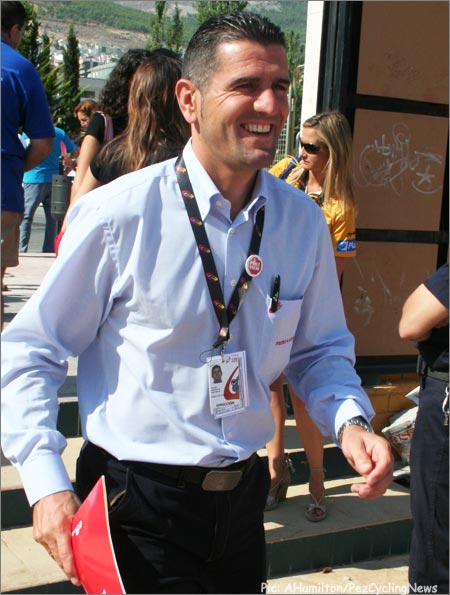 All the other riders were arriving along with Abraham Olano who is another ex-rider that could still race if he wanted too, Levi looked fit and of course he has now lost his U.S. Champs jersey to Tyler, strangely that bald head of his isn’t getting any browner! 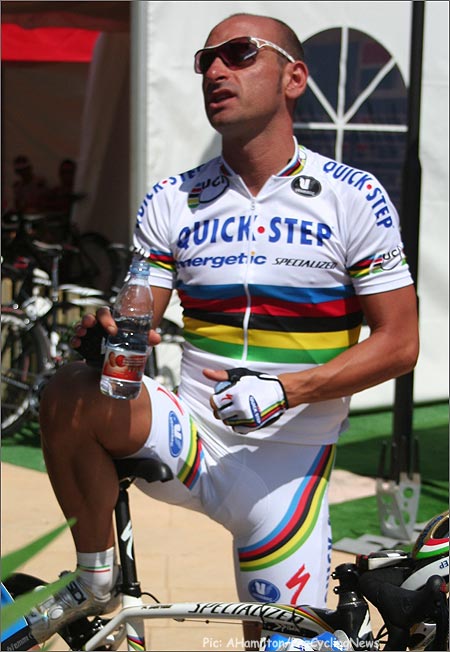 Paolo Bettini was talking to everyone and was happy to have his photo taken with the kids, nearly as happy as Pozzato was with the women! 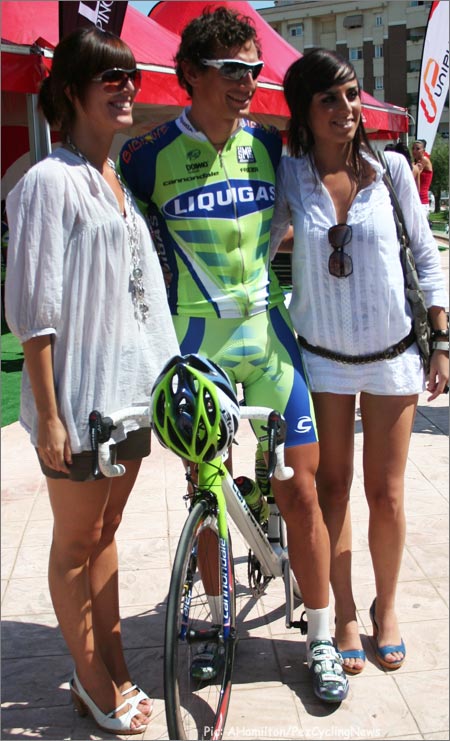 I managed to have a word with Paolo, well two words; hey Paolo, bien? “muy bien!” Ah well, he had other things to do, like ride a bike race … So it was time to go to watch the start, as by this time I couldn’t get the car out in front of the race. 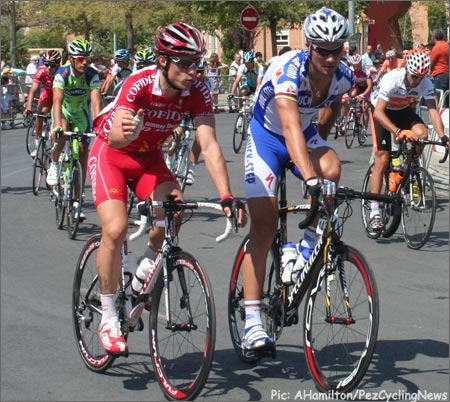 Boonen heads out on stage 3… perhaps thinking about a win to come?

Things from here on didn’t go well as the traffic to Cordoba was horrendous, so a short cut was in order. The Tom Tom wasn’t happy and it was correct, I saw the heads of the riders above a crowd of fans behind a barrier and heard the result on Cadena SER, the sports radio station that has live Vuelta broad casts. Boonen wins and the commentator had a bit of a laugh at the fact the Tom will now be a total cyclist as he had lost his driving license in Belgium, he seemed to drive hard at the finish today though. 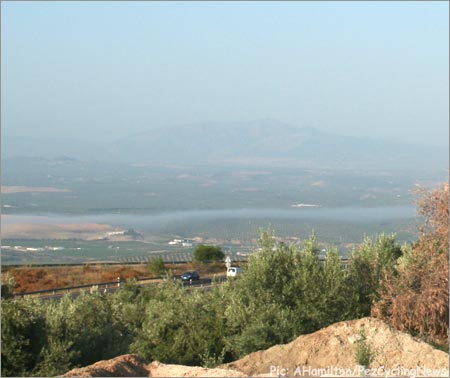 For me I was heading home for some clean clothes and to plan my next days at La Vuelta a Espaсa 2008.