Rest day? Not if you’re a mechanic! We drove half way across Asturias and Cantabria from Oviedo to beautiful Comillas to see what the spanner men from four of the key squads in the race, get up to on their “day off.”

Astana’s big blue bus is hard to hide and we caught up with Chris Van Roosbroeck hard at work changing cassettes and fitting compact cranksets, whilst Alberto spun away in the hotel garage, rather than risk those cold Asturian showers, which never seem more than five minutes away. 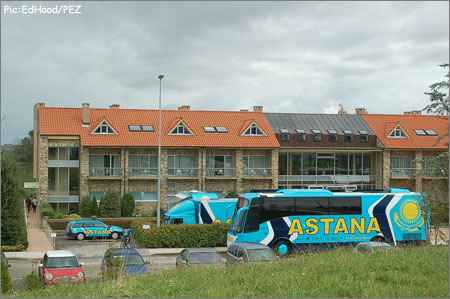 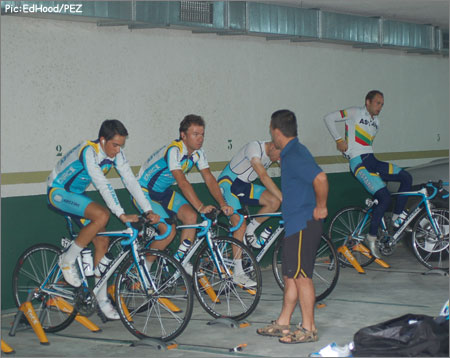 Chris has been with Postal/Disco/Astana for seven years. Astana will be riding 34/53 compact with 11 to 28 at the back, tomorrow. 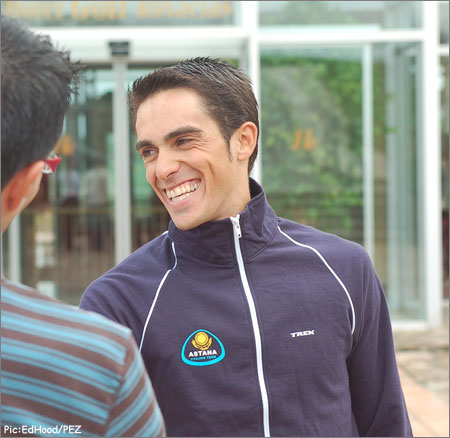 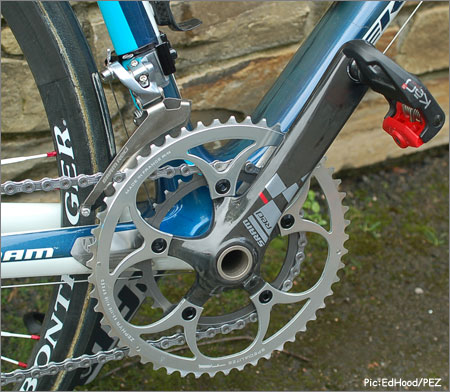 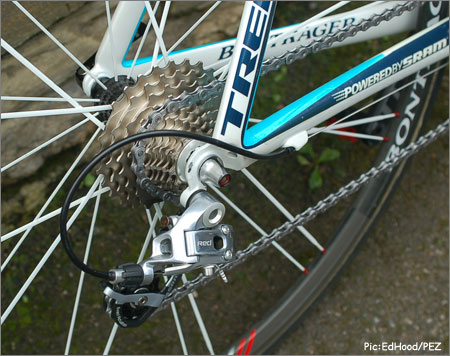 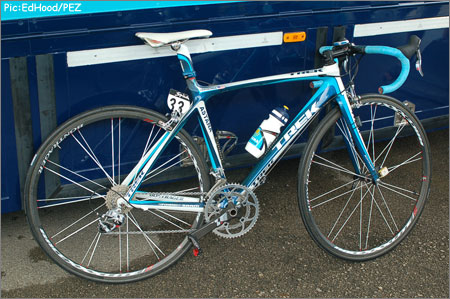 My favourite ‘mechanic questions’ are; “who’s fussiest?” – Levi. And who “just leaves it to you?” – Tomas Vaitkus. 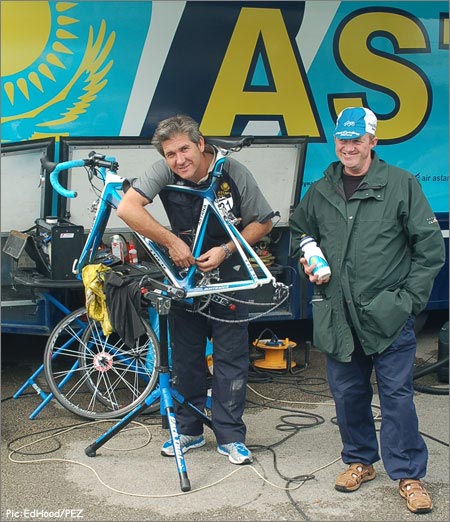 Over at CSC, Tony Barela had more time to talk to us; ‘I come from a cyclo-cross background; I did a lot of work in Luxembourg with the youths and juniors. I had a shop and used to look after Andy Schleck’s equipment, one day he walked in and said – “how would you like a job at CSC?” I said; “you’re kidding me!” But he wasn’t, I got in touch with Kim Andersen and they tested me out. 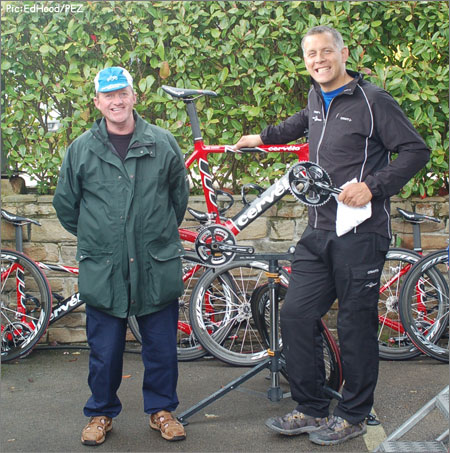 The thing about this level is that time is crucial, a wheel change has to be as fast as possible, but if there’s a crash, you have to remain calm and react properly – there’s a lot of pressure involved.’ 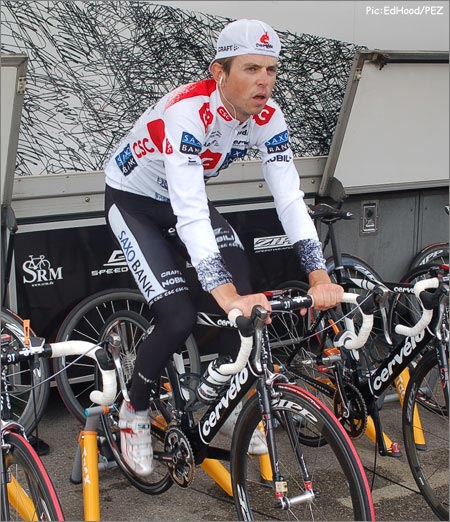 Fussiest? “They are all fussy, but Fabian (Cancellara) is very knowledgeable and so is Carlos (Sastre) – he knows everything about his bike. 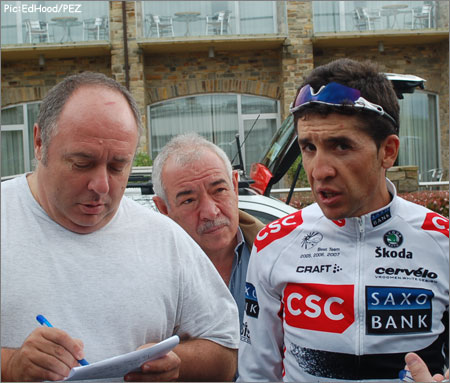 I can’t tell you who the least fussy riders are – I’d get killed! But let’s just say that some of the young ones aren’t so interested in their bikes. But as they mature, I’m sure they’ll develop more of an interest as they realise how important it is to their job. Chris Anker Sorensen for example, is at the truck a lot, asking questions.’ 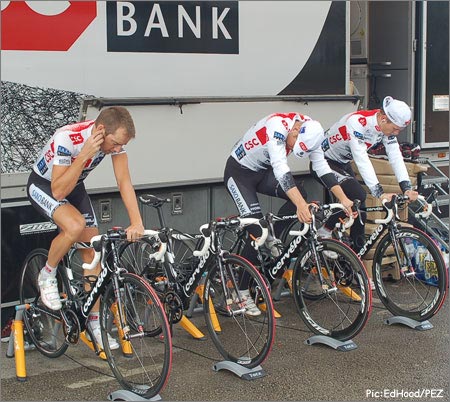 The best thing about being a mechanic? ‘The fact that the riders appreciate when the bike works really well on a hard mountain stage. The atmosphere is great too, being part of it all; whether it’s 38 degrees like it was like last week, or in the rain like today.’

And the worst? ‘Stuff that we have no control over, like organising electric and water supplies at some hotels. Sometimes the police make life difficult for us too, raising safety issues.’ 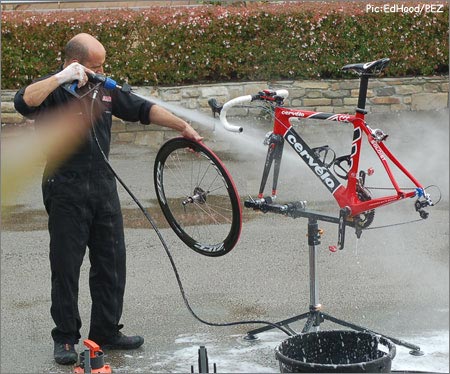 Isn’t it grim washing bikes and cars in the Flemish rain after Het Volk? ‘It’s just part of the job! The riders would love always to ride in the heat and sun, but they can’t – sure it’s nice to work in shorts and a T-shirt, but it’s not possible all the time.’ 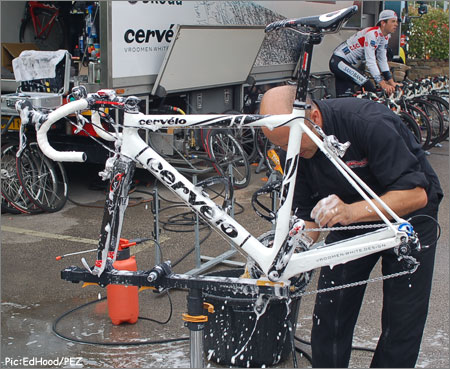 So who rides what at CSC? ‘Carlos and Matti Breschel ride R3 SL’s, whilst the rest of the guys ride Soloist SL’s – the black ones. The red bikes you see are the 2007 race bikes which we now use as spares. We’re around half way through the race so we change the chains and check all the bearings today – if there’s even the slightest doubt, we change them, you can’t take a chance.’

And will it be carbon rims tomorrow? ‘Yes, they resist the high temperatures generated by continual braking much better. Carbon is a great material, you can mould it to any shape and lay in extra fibres or “cross pattern” fibres where you require, to increase strength. 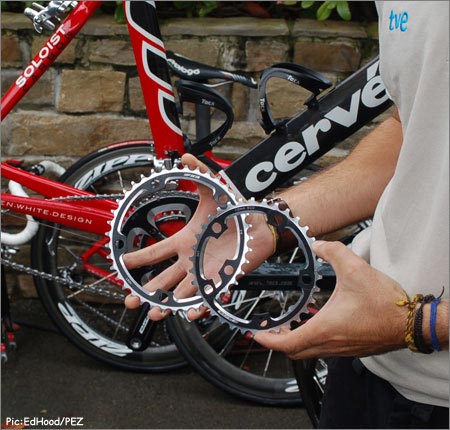 Look at Formula One, 15 years ago, who would have thought that they’d have carbon brake discs – look at the weight saving! Carbon chain rings will come and eventually there will be no need for alloy inserts to take pedal threads in cranks. The resins – glues, if you like – that bind the fibres of carbon together are the weak spot at the minute, but I’ve not doubt that’ll change.’

And will the guys be on lightweight ‘specials’ tomorrow? ‘No, not at all, the bikes are under the UCI 6.8 kilo weight limit already and we have to put weights on them to meet the rules. I’m pretty sure they (the UCI) will be weighing the bikes at the top of the Angliru tomorrow; it’s easy to have them the correct weight at the start, then lose it during the stage! I think that the weight rules aren’t good for progress, the bike manufacturers are going to say; “what’s the point of spending fortunes on Research and Development, if they are going to outlaw it?”

Whilst the Astana and CSC camps had been busy with fans and journos, over at the gold jersey’s team hotel, it was ‘tranquil.’ 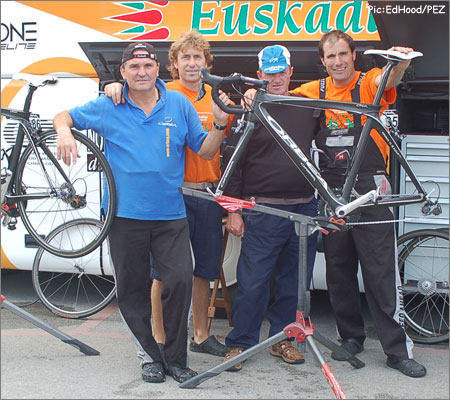 Euskaltels’s Tomas Amezaga (that’s Basque, pronounce, Am-ee-thee-ga) was happy to chat about race leader, Egoi Martinez’s Orbea, but not before I spotted a name from my youth on the carbon seat post – ‘Zeus.’ ‘All the bikes are now on the new model Shimano gruppos, with concealed cables. We’ve been testing Shimano electronic; Egoi has been using it here, but he’s on mechanical gears tomorrow.’ 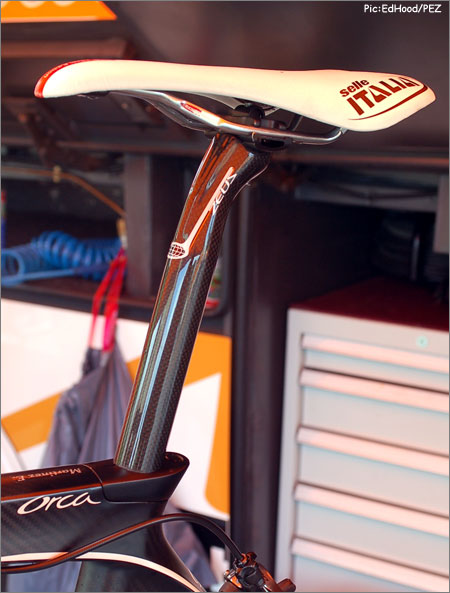 I asked if this was because he wasn’t wanting to take any risks? ‘No, he has no problems with how it functions, it’s just that he rode the whole Tour de France on Shimano mechanical without problems.’ 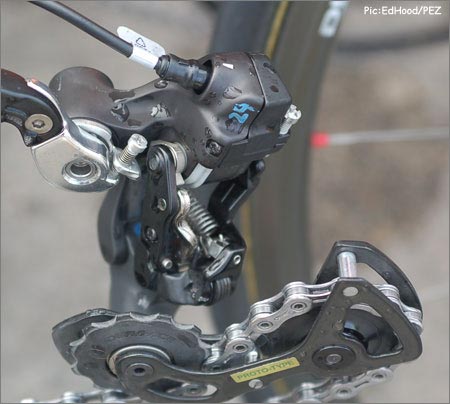 And will it be 34/53 on 11 to 28? ‘Yes, except Astarloza, he rides 177.5 cranks, which are not available in compact yet, so we have him on 38/53 with 11 to 28. Compact cranksets are the only changes we make for the stage – apart from that the bikes are set up as normal. If it’s going to be wet we use aluminium rims on the front – always carbon at the rear – for better braking, but we’ve checked the weather for tomorrow and it is to be fine, so we’ll be on carbon rims front and rear.’

And can Egoi hold on to the jersey atop the Angliru? ‘He won’t lose much time, but Contador and Sastre will be on the attack tomorrow, it’ll be a hard day!’

Tomas then went on to tell us that after the Vuelta, he flies from his home in Bilbao to Dublin, where he’ll be succumbing to his likeness for a Guiness or two – after working all those rest days surely he deserves a drink? 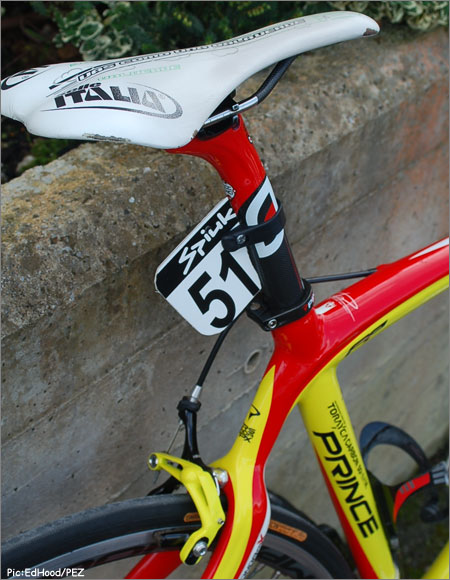 Unsurprisingly, there wsn’t much chat over there, but we did take some snaps of Valverde’s red and yellow Pinarello Prince – maybe the Orbea’s black would have been a more appropriate colour?