An early cat 2 climb would be the only detractor to what would be a bunch gallop, and after some jockeying into Zaragoza, the big names were left out of the mix and the somewhat unlikely Sebastian Hinault took a fine win in front of a few other surprise top three finishers.

A suspect grey day greeted the riders of the 2008 Vuelta for Stage 10’s dash into Zaragoza. Near the start, the cat 2 climb Puerto de Monrepos did little to break up the group and the lone Slovakian Matej Jurco from Team Milram ended up finding himself alone and out front, slowly building a lead to over 6 minutes. It was being set up as the perfect day for the sprinter’s teams, who could keep the breakaway rider in check, set the hook, and reel him in to give the big horses a chance at the line. 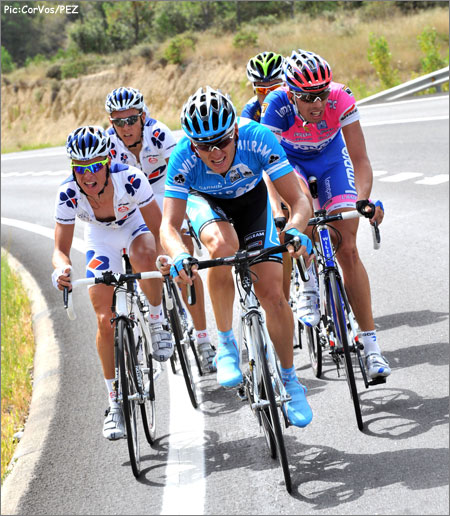 The break did their noble work…but it wasn’t to be today.

For the meat of the race, the team of the Maillot Oro, Euskatel Euskadi, kept their man Egoi Martinez and the rest of the peloton chugging along safely, while the Slovak ahead got so far as 7 minutes lead. Martinez, a former Discovery Channel rider, was no doubt fielding questions from the group about all the rumors swirling around Lance Armstrong and his possible comeback. 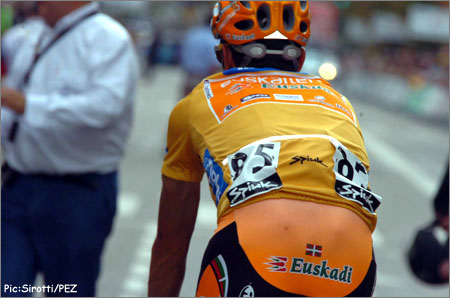 With the break up the road, Euskaltel did their part to keep Maillot Oro, Egoi Martinez, safely atop the overall.

As it was time to bring the Milram rider back, other teams began to show at the front. First Astana (more former Lance teammates – perhaps discussion time?), then Liquigas, then Rabobank took over in earnest, no doubt trying to set up Freire, as the gap plunged quickly. And lurking in the bunch was the omnipresent Erik Zabel, no doubt benefiting from having a teammate up the road. He waited and bided his time like the wise old owl he is. One sprinter they wouldn’t have to look out for was Daniele Bennati, who abandoned today.

As they came into the long flat roads outside of Zaragoza, a few attention grabbers leapt from the field and joined Jurco, briefly making a quartet, but a doomed quartet. 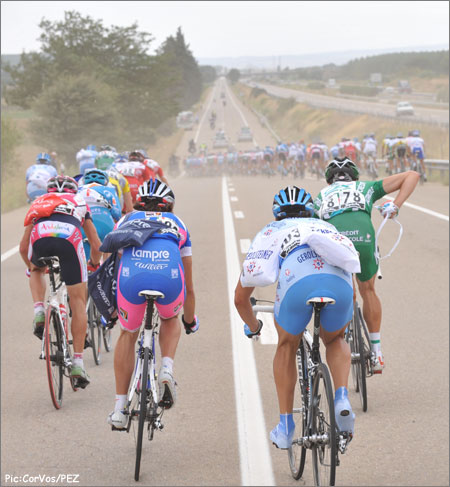 As the speeds increased behind, it was all together in the final 15km. As the approach to the finish loomed, Quick Step took control of the business end of things, as other sprinter’s teams lined up their arrows on either side of the road. Things were very nervous at the front end as elbows were thrown and words were said while riders scrambled for wheels behind the main team leadout trains. 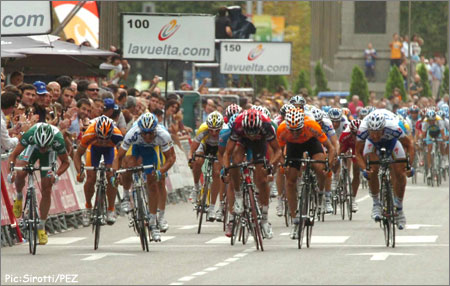 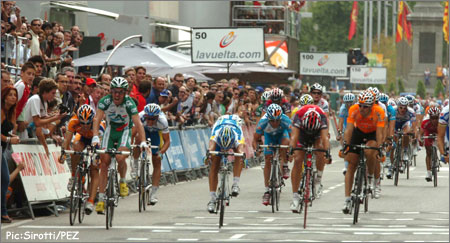 Somehow, the wheels came off the Quick Step train, and Boonen was obscured by a wall of riders. The other side of the charging peloton opened up as other leadout trains came into disarray and Credit Agricole’s Sebastian Hinault came good to get a nose ahead of Llyod Mondory of AG2R, and Greg van Avermaet of Silence-Lotto. An unlikely finish to what one would think would be an elementary day for big name sprinters. I guess it goes to show you, you never can tell in this Vuelta! 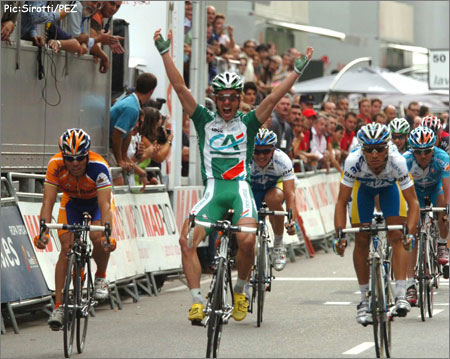 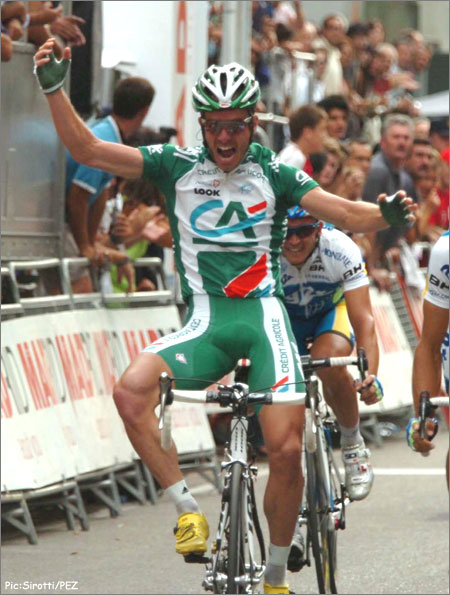 As the group came in as one, the GC remains the same. Egoi Martinez will enjoy another day in gold, and he most likely will keep it through tomorrow’s stage too, which is flatter than today’s was and is tailor made again for the sprinters. 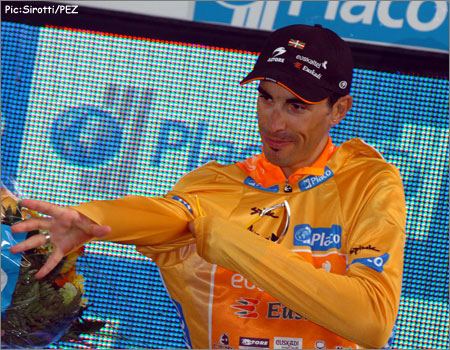 Finally, the Maillot Oro managed to stay on a rider’s shoulders for more than a day!

Until then, keep it right here to PEZ for the best coverage on the ‘net! 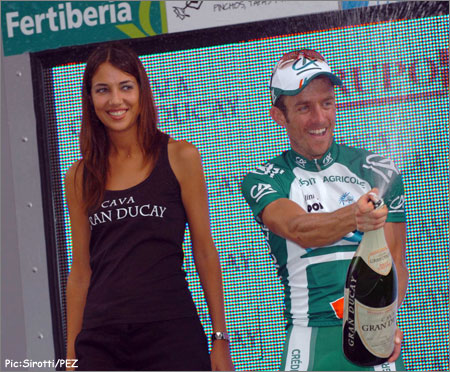 Hinault enjoyed his time on the podium.

A Rider With A Future: Ben Swift