Race Report: On a day that should have been fairly straight forward all hell let loose. If all had gone to plan then Bettini would probably have won anyway, but if it hadn’t been for a big mistake from Alejandro Valverde and his team then the man from Murcia could have taken the stage, as it turned out his Vuelta ambitions are probably over.

Today we are heading north from Burgos to the port town of Suances up on the Atlantic coast, on the way we need to cross the 3rd cat climb of the Alto de Bocos (78 km), the 2nd cat Portillo de Lunada (80,1 km) and the 2nd cat Alto de Caracol (125,5 km), which is 60 kilometers from the finish, so on paper this is another sprinters day. Two bits of useless information; the Alto de Caracol means the snails hill, lets hope they climb it faster than a snails pace and we go through an intermediate sprint in the home town of yesterdays winner Oscar Freire; Torrelavega 20 kilometers before Suances. The Race
Just like yesterday we had three riders get away early and build up a nice gap, only around 4 minutes over the first climb, Alto de Bocos, which is not going to be enough to stay away; the three riders were Manuel Quinziato (Liquigas), Sйbastien Hinault (CA) and Sandy Casar (FdJ). Sйbastien Hinault won stage 10 to Zaragoza in a bunch gallop, maybe he didn’t look at today’s race profile or he might have waited for the sprint, although in yesterdays sprint Hinault’s pulse went up to 195 bpm, his max is 197.

Behind the usual chase was being organized by Quick-Step, Caisse d’Epargne, Lampre and of course the team of race leader; Egoi Martinez, they are managing the lead to no more than 4 minutes, although its not a problem as Casar is the best placed in 29th position at 14 minutes and 59 seconds, Hinault at 42 minutes,11 seconds and Quinziato at 1 hour 1 minute and 38 seconds, so nothing much to worry about there! 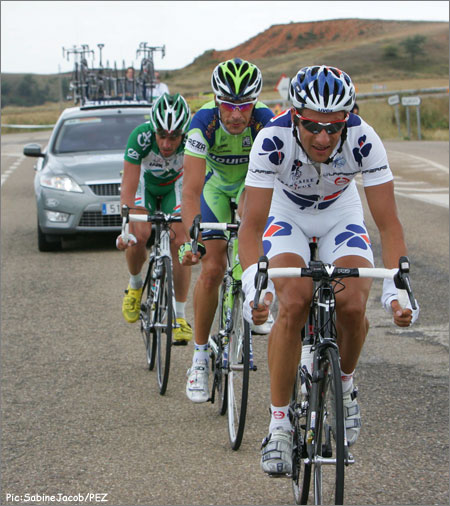 Yesterday’s winner and local boy, Oscar Freire said after the stage that “I wasn’t in peak form at the start of the race, but little by little I’m getting there. Today I was also well supported by Flecha and Horrillo. They put me right on Boonen’s wheel and I was stronger than him”. Freire also confirmed his thought on the World Champs “that is my big goal for the year. And I’m sure it will turn out well for me, but I also recognize that Bettini is really strong right now”.

Over the second climb of the day, Portillo de Lunada (2nd cat), the rain has started to fall and a thick fog is swirling around the hills, the gap is just under 3 minutes as Sandy Casar goes over the summit first, all the riders are now wearing race capes and hats under their helmets and Hinault has a set of full fingered gloves, as have many of the riders in the peloton, another hard day at the office! 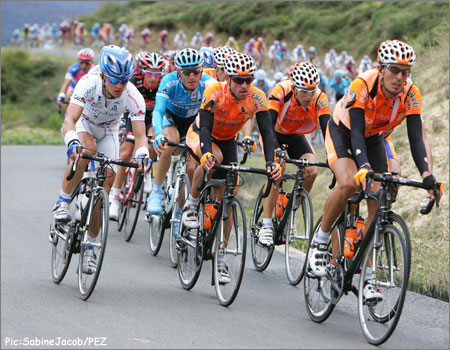 The leaders advantage had grown to 3 minutes 40 seconds on the third and last climb of the day, the Alto del Caracol (2nd cat), but by the top their lead was back to under 3 minutes to David Moncoutie (Cofidis) and the others at 3 minutes 20 seconds.

The Main Action
The rain was falling heavily and the reported temperature was down to under 8єC, now on the flatter roads to the finish the bunch was split due to the descent, cross winds and punctures, the riders were suffering in the bad conditions. A group containing Alejandro Valverde had been distanced behind the group of the Gold jersey; Egoi Martinez, they were having a hard chase to make the front peloton, which was being towed by two Astana riders. Valverde was doing a lot of the work himself and the situation didn’t look good for the Murcian rider at this point. 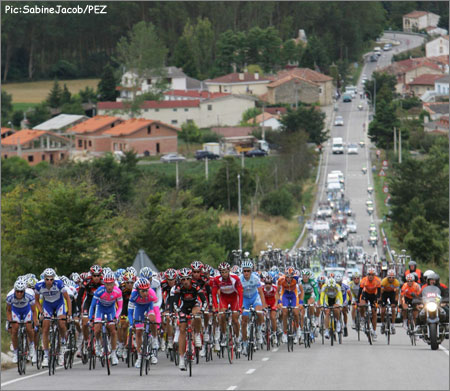 The three leaders had 46 seconds on the Martinez group and a minute and a half on the Valverde group with 36 kilometers to go to Suances. Astana, Quick-Step and Euskaltel were pushing hard and there were very few team cars between the two main chase groups, so it was not going to be easy, the gap between them was hovering around 40 seconds and Valverde had to do a lot of the work with Philippe Gilbert (FdJ) and Sylvain Chavanel (Cofidis).

With all the action behind the three escapee’s were caught and the situation was that the Gold jersey group were flat out to distance themselves from the four chasing to get back; Valverde with help from team mate Arroyo, Chavanel and Gilbert, but they were losing time it was now 2 minutes 10 seconds and Astana had Klцden on the front to give Leipheimer and Contador a bigger time advantage on Valverde. 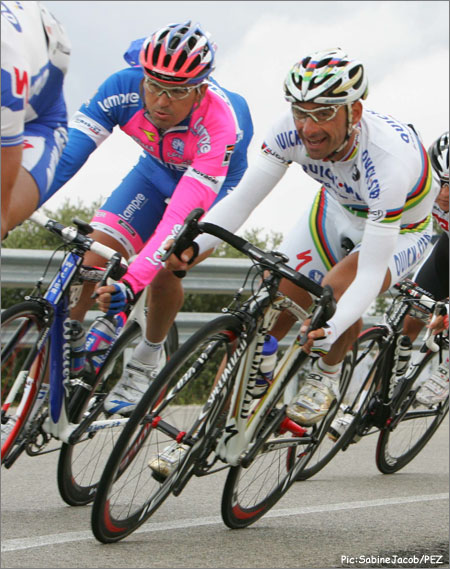 The larger group behind Valverde has caught him and the other three, but with 20 kilometers to the finish the gap is getting bigger, but Valverde does have more of his Caisse d’Epargne team around him. This has been a big mistake by the Caisse d’Epargne team and we can see Valverde’s overall chances go out the window due to a little inattention.

Into Torrelavega the front riders are flying away from the hapless Valverde with Astana’s Tomas Vaitkus hammering through the rain soaked roads. In the front group we have; Bettini, Freire, Contador, Sastre, Cunego, Leipheimer and Martinez, behind Caisse d’Epargne were getting a little help from Silence-Lotto, but it was their problem to sort out and the gap was getting near 3 minutes. 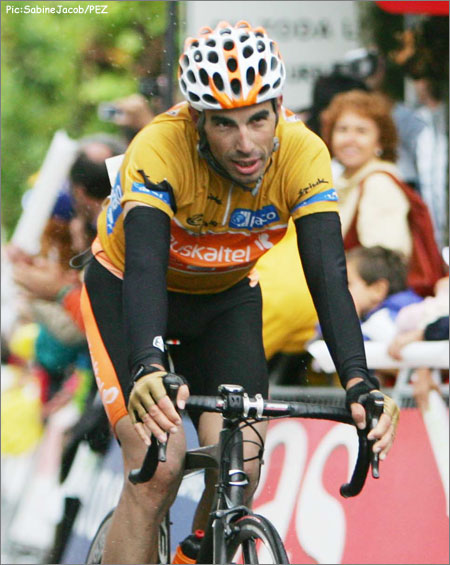 At 5 kilometers to the line in Suances the rain had eased to a fine drizzle and Valverde was 2 minutes 52 seconds behind the front group. At the front of the race quite a few riders could smell a win and solo attacks were starting to shoot off, all to be reeled in by Quick-Step. The last kilometer is slightly up hill and Contador takes the lead with Gold Martinez on his wheel and Bettini close. 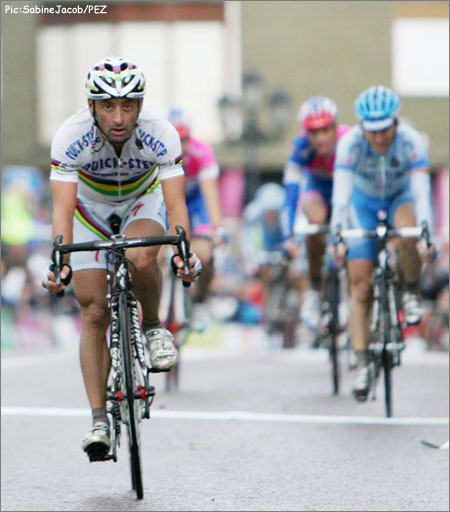 Under the power of “Bert” the group splits and Bettini powers away on the sticky climb to the line to take a very hard win on a very hard day, the unhappy Valverde comes in under heavy rain 3 minutes 23 seconds after the Gold jersey group, race over for Alejandro? Probably! 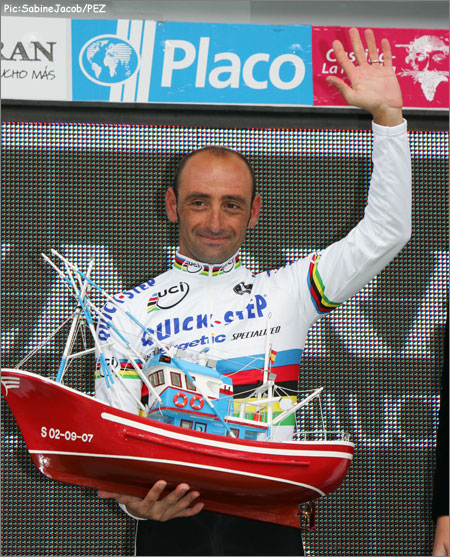 I hope our man on the road, Ed Hood, took his rain coat with him as the weather is going to be wet on the L’Angliru on Saturday, keep Pezed to find out.