Race Report: Another mountain stage, another perfectly executed victory for Alberto Contador. The hottest stage racing talent of his generation piggy-backed on all of Caisse d’ Epargne’s hard work to lay down the law. So, if Lance thinks he’s going to walk the Tour next year ….

Caisse d’ Epargne had been thrashing themselves to set up Valverde for the stage win, chasing down an 11-man break – the finishing climb looked perfect for Don Alejandro. But when Ezequiel Mosquera lit the blue touch paper, Valverde suddenly looked more pedalling squares than Catherine wheel.

Contador showed that he isn’t in the mood for giving presents away and blasted past Mosquera in the finale for the stage. It was a good day all-round for Astana with Leipheimer taking second place plus bonus time. 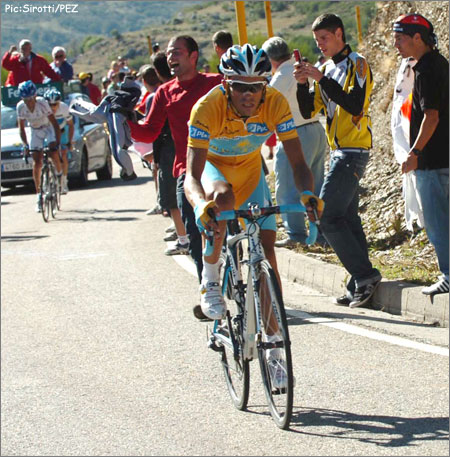 The only one that might be able to touch Contador…is Levi Leipheimer, and he’s his teammate.

Valverde and Sastre lost a minute – but if the last climb had been as steep as the Angliru we might have needed a sundial to measure the time gaps.

Lie of the land: Young Bertie Contador had stuck the knife into his competitors with a dominant cruise up the Alto de l’Angliru yesterday; Levi Leipheimer’s been put in his place (or has he?); Alejandro Valverde’s admitted he can’t win overall and is racing for stages; and Carlos Sastre looks off the pace.

But today could have been a short, sharp shock to the leader’s system. Only 158kms but it looks like a seismologist’s wet dream – all nasty little spikes on the profile. There’s not much flat road to be found as the riders struggle up three third-cat and three first-cat climbs. The finish line comes atop the Fuentes de Invierno and it’ll hurt – 1489m up, 14km long.

Lots of early flurries as riders try to make the move of the day. The impressively improving Nicholas Roche has a go in the sunshine, along with Bettini and Chavanel, and Yaroslav Popovych jumps, too. 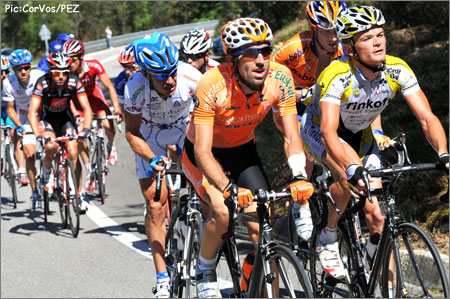 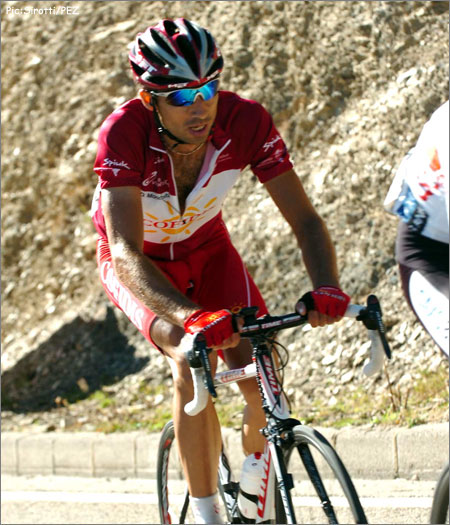 Chavanel did a great job defending Moncoutie’s mountain lead. Moncoutie followed Chava’s work with a superb climb to the finish to take 5th.

Sylvain Chavanel has a mission today – hoover up as many mountain points as possible to preserve David Moncoutie’s lead in the climbers’ competition. And he does as he’s told, the good boy, leading over the San Tirso, the San Emiliano, the Colladona and the Colladiello.

The maximum gap is four and a half minutes – the riders are barreling along at 40kph and the speed splits the peloton in two coming off the Colladona, but once the racers are refueled it comes back together. 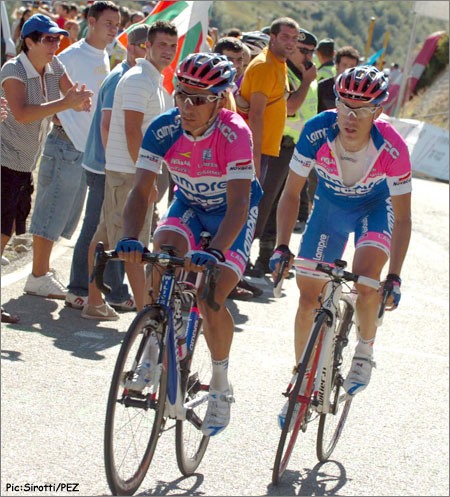 Cunego once again made the break today, but the break that would seem to suit him best in hopes of a stage win, saw him crumble late and finish far down. Or maybe he knew that it was hopeless to go 110% for the win on a fast climb…

Caisse d’ Epargne are sitting on the front of the field, so Valverde has obviously given word that today he’s “on”. They peg the break’s lead at three and a half minutes.

Descending the Colladiella ain’t for the faint-hearted. Heras nailed Menchov here once before, chemically assisted admittedly, but you need guts and bike-handling skills. 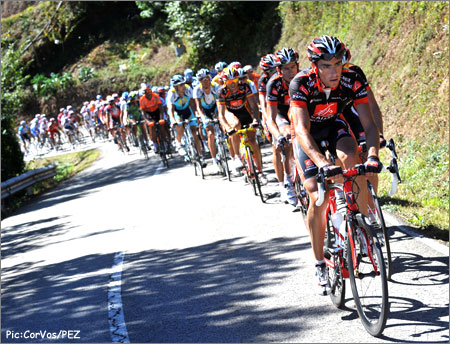 Valverde’s boys got a lot of work on the front today…hopefully some of them can at least call it good training for Worlds.

Not taking too many chances, Florencio, Kozontchuk and Van Goolen fall behind, but there’s a long way to the finishing climb so they’ll hear messages in their earpieces: don’t panic, work together. It’s precisely what happens – Kiriyenka is dropped too, Chavanel punctures, but five together have no problem in rejoining the break.

Approaching 25kms to go, the final climb looms in the near-distance. Chavanel is getting itchy feet and powers away – Landaluze tries to go with him but can’t. Velits, Van Goolen and Mayoz get on terms and …. off they go. The gap grows to 45 seconds over their former buddies. Caisse d’ Epargne continue to lay down the law behind, closing in with every pedal stroke. 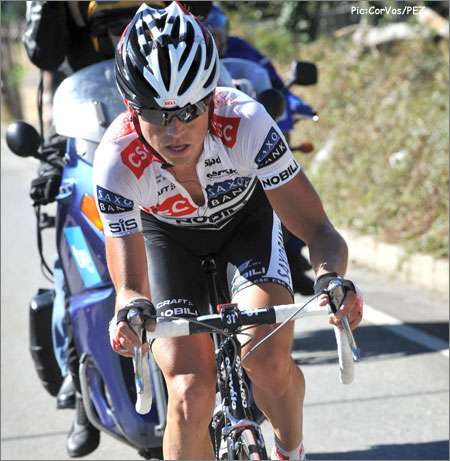 Just before the bottom of the Puerto de San Isidro, and Van Goolen gives it full gas. Chavanel and Velits chase him, but Mayoz looks like he’s boiled dry.

Caisse d’ Epargne are giving everything for Valverde – their boss Eusebio Unzue had planned to attack the final climb, but not to burn Garcia Acosta, Arroyo, Erviti and Pasamontes to get there with a winning chance. “We didn’t expect to have to make this much of an effort”, were his words on Spanish TV.

Van Goolen batters on, as the leaders’ group withers – about 20 left, half-way up the climb. Six kms to go and Juanma Garate catches and drops Van Goolen. Iban Velasco of Euskaltel and Astana’s Sergio Paulinho make it three …… briefly, before disappearing. 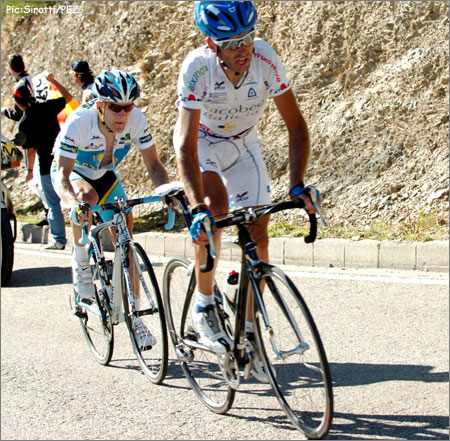 Mosquera put paid to any chances Van Goolen might have had, along with Sastre and Valverde.

Valverde, Contador, Leipheimer, Mosquera and Sastre (struggling a bit) are all that’s left behind of the name favorites.

Ezequiel Mosquera has his best day ever in a big tour, nailing his foot to the accelerator, with big consequences … 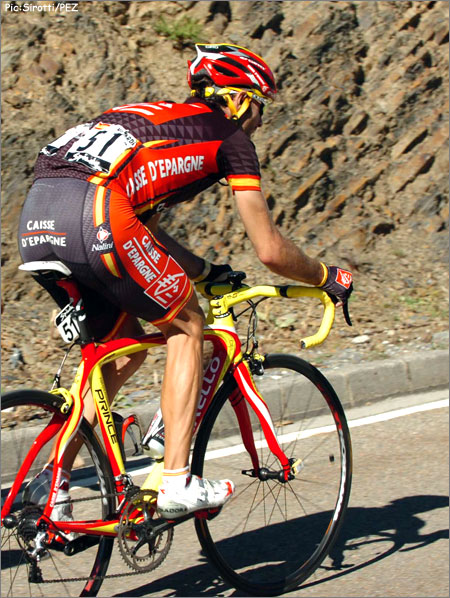 … Valverde explodes and goes backwards as fast as Mosquera’s going forwards. Moments later, Sastre implodes. Gesink and Moncoutie go past Valverde who can hardly look in their direction. Sastre does manage to hang on though.

Just when you think Mosquera will get the stage Contador comes over all Merckx (or all Armstrong?) and roars past for the stage. 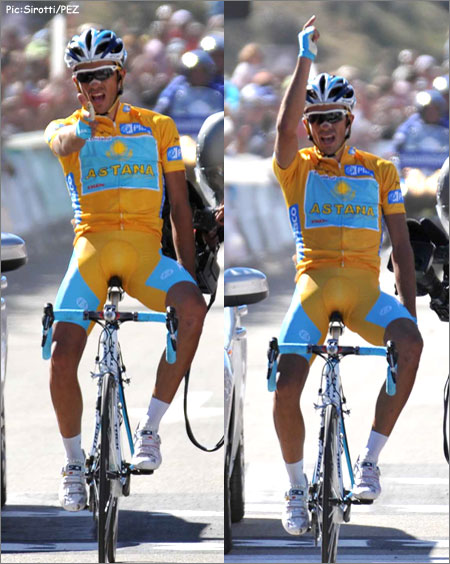 This is where I’m supposed to say, Bang.

It cements his gold jersey, although there’s a suspicion that Leipheimer wishes he’d attacked first.

Stay tuned as Ed is roadside, and don’t touch that dial or you’ll miss all the catch-up in Eurotrash tomorrow. Keep it PEZ!