Race Report: What a weekend!! Alberto Contador asked the questions, but no one had the answers, back to back stage wins on two of the hardest stages on this years Vuelta a Espaсa. You don’t win all three Grand Tours by accident and this one isn’t over yet; It’s a long way to Madrid!

What has Contador got to say?
“Winning the Vuelta this year would be the icing on the cake, but the race still isn’t over yet. It’s looking better for me but until Madrid, there’s no reason to celebrate”. He prefers to be cautious, since there are still some tough days of racing ahead: “You have to have respect for the race to the very end.” And how did he see his ride on L’Angliru? “The hard work paid off with results and the team was in absolutely top form. I went off ahead as well as I could, since my teammates had set a very fast pace to get some distance on Carlos Sastre. I saw they were getting close and I pressed ahead. I managed to win at the most important peak in Spain”. 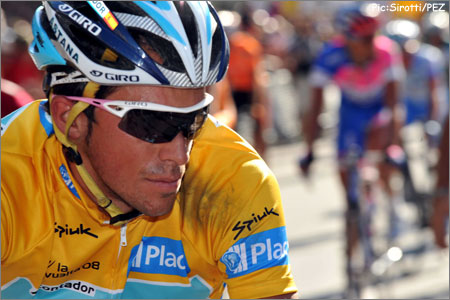 And the Spanish Press:
Today I had to have a good look at all the Spanish papers, this took more than one cafй con leche! My favorite sports paper; As headlines are: “Like a champion.” Marca calls the Vuelta: “The Contador dictatorship” and both talk about the hard work of the Caisse d’Epargne team in support of Alejandro Valverde and everyone is amazed by Ezequiel Mosquera’s excellent performance over the last two days. Sport takes things a bit further and compares Alberto to a judge: “Contador passes a double sentence.”

Race time!
Today’s 15th stage is from Cudillero on the north coast traveling south to Ponferrada over 202 kilometers of what is not an easy course. After a down hill start the route climbs from sea level to the top of the 1st cat Puerto de Somiedo at 1,480 meters altitude, then before the finish the riders need to cross the Alto de Coral de los Lobos (2nd cat), the Alto de Ocero (3rd cat) and then the unclassified climb to Lombillo with only 8 kilometers to the finish, in other words “a mixed bag!” 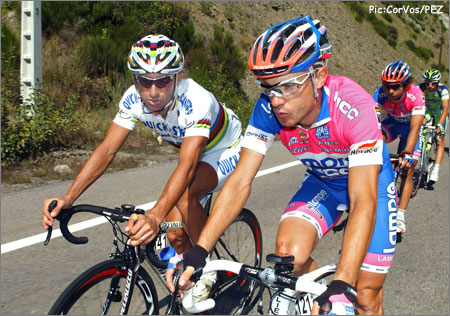 The Italian Worlds Team was announced today…Bettini will lead the charge and is perhaps discussing the proceedings in Varese with his teammate in a few weeks time: the Kid.

A big group of 17 riders thought they might have a chance today if they build up a nice big advantage early and so headed up the road before the first climb of the Somiedo and with 100 kilometers to the finish they were 11 minutes ahead. In the group nearly every team was represented, so Astana were not chasing too hard behind. The group were: Matti Breschel (CSC), Josй Luis Arrieta (Ag2r), Olivier Bonnaire (Bouygues T), David Arroyo and Xabier Zandio (Caisse d’Epargne), Sйbastien Minard and Nick Nuyens (Cofidis), Mikel Astarloza (Euskaltel), Philippe Gilbert (FdJ), Paolo Tiralongo (Lampre) Heinrich Haussler (Gerolsteiner), Alessandro Vanotti (Liquigas), Juan Manuel Garate (Quick Step), Theo Eltink (Rabobank), David Garcia Dapena (Xacobeo-Galicia), Pieter Jacobs (Silence), Mikhail Ignatiev (Tinkoff).

Most of Spain seems happy with Alberto Contador, except Alvaro Pino, the manager of the Xacobeo-Galicia team and climber, Ezequiel Mosquera. He had this to say: “We, the poor teams, also know how to do damage. We can’t win, but we can do damage. I’m not asking them to let us win, but I would have liked to have seen some collaboration, as the attack was in their interests, too.” Pino did not stop there: “What they did has been noted down. It’s been noted down and it won’t be forgotten. They had a lot of nerve, sitting on Mosquera’s wheel and then attacking him to take first and second on the stage. The least they could have done was to give him a hand.” Johan Bryneel did point out that: “Contador is a climber and needs to take advantage of the mountains and get any time he can from his adversaries.” So, same old story. 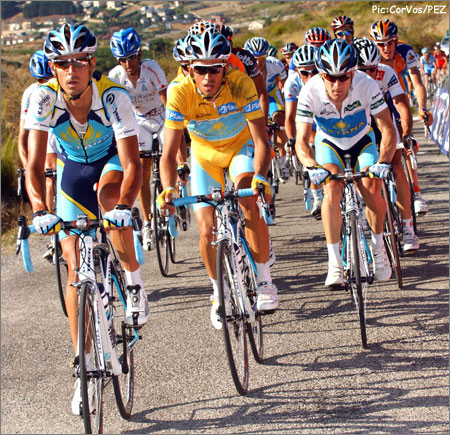 Astana was in firm control back in the field.

On the climb of the Coral de los Lobos (don’t think there are any wolves here?), David Arroyo (Caisse d’Epargne) leaves the others to gain 1 minute 20 seconds on the group and over 15 minutes on the easy going bunch. Theo Eltink (Rabobank) and Heinrich Haussler (Gerolsteiner) set of to chase Arroyo, but they were all together again on the other side with around 50 kilometers to the finish in Ponferrada.

Josй Luis Arrieta (Ag2r) was next to try his luck on the Alto de Ocero, the bunch were not interested in doing much today as they had nice warm weather of nearly 30єC and no wind to talk about. At the top of the Ocero Arrieta had 40 seconds on Gilbert (FdJ) and Arroyo (again). 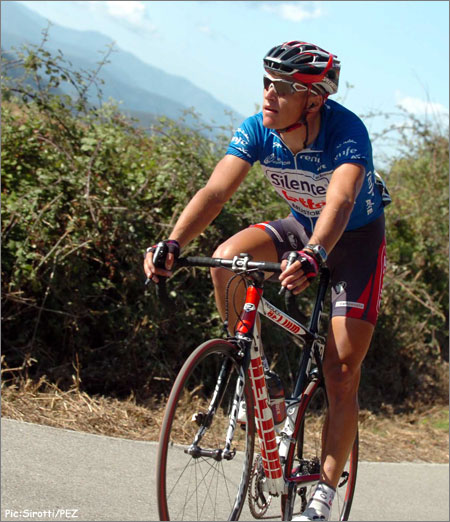 Silence-Lotto’s Greg Van Avermaet had an easy day in the Points Jersey.

The Gold jersey of Contador was back to the race doctor as he must have had a small crash, but it did need attention, a plaster and something for the pain, no worries as he was still smiling for the cameras as his team came back for him.

Josй Luis Arrieta was moving well and had built up a lead of 56 seconds on the others who were all together (except the dropped Eltink) and 17 minutes on the bunch which was being lead by Cofidis. There is a big finishing circuit that takes in the small climb and Heinrich Haussler wants to get there before the others, he is first joined by Zandio and then Jacobs, but they are still 40 seconds behind Arrieta 20 kilometers out. 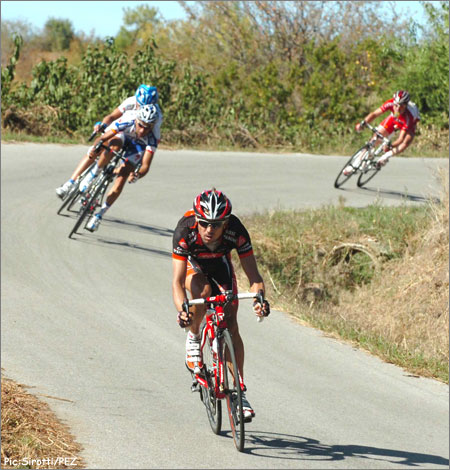 The break did not stay together to contest the finish as a group – they came in pieces.

The Last Lap
As the chasers go through Ponferrada for the first time they are getting more organized and catch Arrieta on the small climb of Molinaseca, now its time for more attacks. 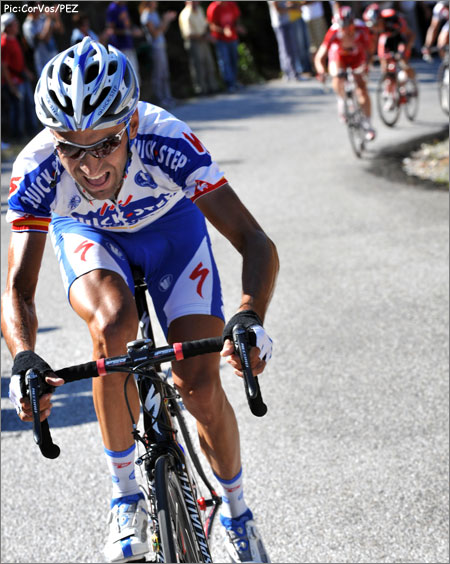 Juan Manuel Garate has a go.

Tiralongo (Lampre) takes Zandio away and then is joined by the others over the top. On the descent Garate (Quick-Step) has a serious attempt as the others argue about who should chase. They then hit the sharp climb of the Lombillo which is narrow and 13% in places, Garate is joined by Breschel (CSC), Nuyens (Cofidis), Arroyo (Caisse d’Epargne) and Garcia Dapena (Xacobeo). Arroyo is the strongest and attacks again on what should have been at least a 3rd cat climb. 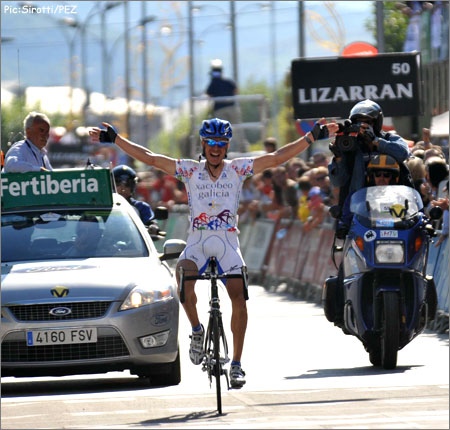 Galicia got their revenge for Zeke after yesterday’s thankless effort.

With 10 kilometers to go Arroyo, Nuyens, Garcia Dapena and Garate are being chased by Astarloza and Tiralongo through tight, rough and twisty farm roads. First Arroyo attacks and as soon as they bring him back then Nuyens goes, he in turn is caught and Garcia Dapena launches himself off for a 3 kilometer ride to the line. 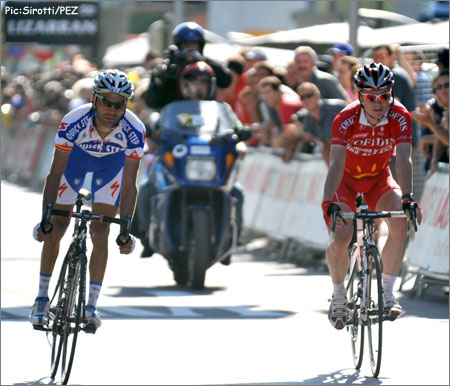 Nuyens was 2nd on the day.

The other three are tiring and trying to out fox each other, this plays into the hands of the Galician rider and he crosses the line 16 seconds in front of Nuyens. The small team got their stage win in the end, Alvaro Pino should be a bit happier now. 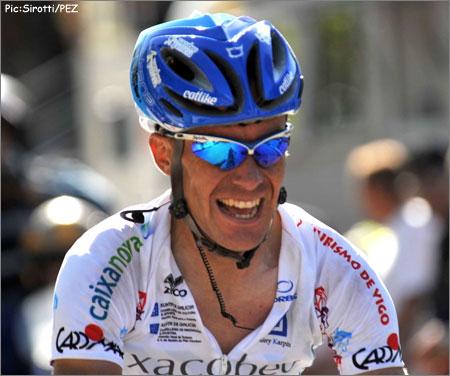 The bunch were still 10 kilometers behind the winner and Astana were making sure Contador wouldn’t have any problems on the tricky run in to the finish, this gives Perico Delgado time to tell more bad jokes on the TV.

Kevin De Weert (Cofidis) takes the bunch sprint with Contador and all the other stars safely in the bunch. 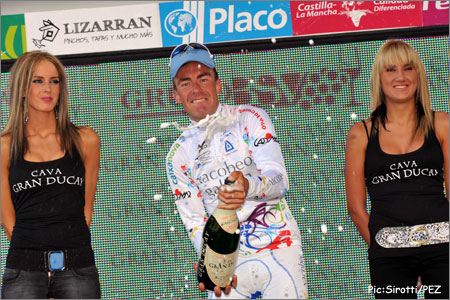 Yessir, I’m going to have some fun with some champagne!

So no changes and a nice win for one of the smaller teams. The Vuelta isn’t over yet, lots more to come, stay tuned.