Race Report: A sunny, cloudless sky met the adjoining of Stage 16 today, where Contador stood firmly on top of the GC. An early climb wouldn’t prove too much of a bother, and the group set up for a bunch sprint. And Tom Boonen delivered the goods in an exciting finish. Read on!

The Alto del Acebo was the starting cat 1 climb, the rest of the day was mostly flat. Two dudes take off Jesъs Rosendo (Andalucнa-Cajasur) and Walter Pedraza (Tinkoff Credit Systems) made off just after the climb, and gained about 2 minutes in short order. 2 minutes became 3 minutes, while behind the group talked and laughed and took it overtly easy. 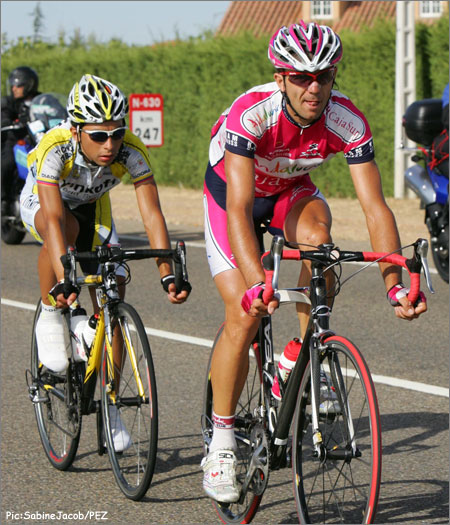 With 70km to go, they passed the famous Bull cutout standing on the hillside. You know you’re at the Vuelta when you see that guy. 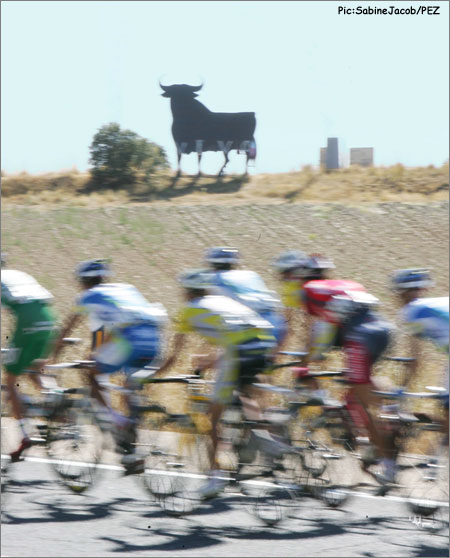 Slow going with the chase, some of the motorcycle journos are interviewing other moto journos. They really are almost touring, this group. Slow ride. The break is being kept at about 3 minutes give or take a few seconds, but the break isn’t driving it really hard either. They’re enjoying their time in front of the camera for their sponsors, for sure. Meanwhile, no more than 33 kms have been covered in any of the first 4 hours.

At 45k to go, the gap still sat at 2:20. Milram and Quick Step were at the head of the “chase” and the guys at the front were actually looking around. No one was working very hard. This was shaping up to be a perfect recipe for a bunch sprint finish. Until then, it was a training ride. 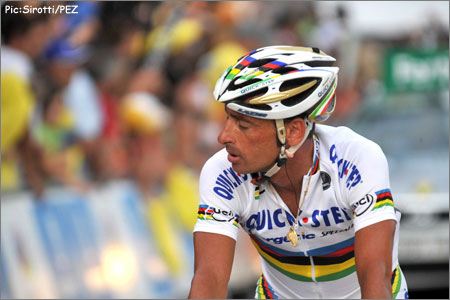 Finally at 35 km, the chase picked up a bit as Paolo Bettini went to lend a hand to catch the two up front, and in very symbolic fashion, a vulture was caught by one of the camera motos, circling overhead. Shortly thereafter, Il Grillo was at the back, laughing. It was getting to be past 6 in the evening, and the speeds were picking up. Wouldn’t want the race called on account of darkness! It was down to 1:53.

Quick Step was moving up en masse with Boonen, and Milram had Zabel to look after. Horses ran alongside the two breakaway riders up front, and easily kept pace with them. Either those guys were tooling, or those horses missed their calling. 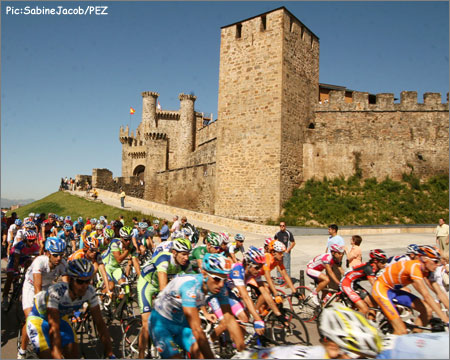 Silence-Lotto also threw a body at the front, and the gap began to come down in earnest. I bet a lot of cycling journos were thankful for the acceleration. I know this one was. Finally at 15km, the break was truly doomed, as they held 20 seconds. The game was on!

As the two were absorbed, Pedrazza waved goodbye to the lead moto, as the pair were quickly show the back room of the peloton. There was no counterattack.

Things quickly became single file, but no team was really controlling the affair. Quick Step put that to rights at 5km, as their train had Bettini at the front doing his turn for Boonen. 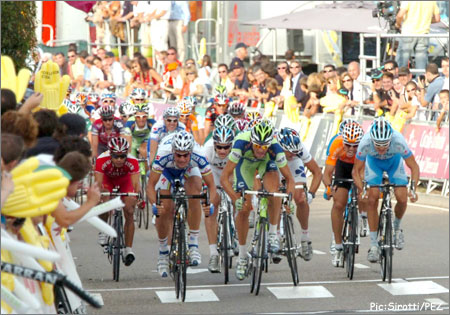 The Cricket’s monster pull done, he pulled out of the way…the last Quick Step rider launched Booned for the line as FDJeux and Credit Agricole tried to infiltrate matters. A lone Zabel made his way up unassisted on the left hand side of the road, bobbing and weaving. 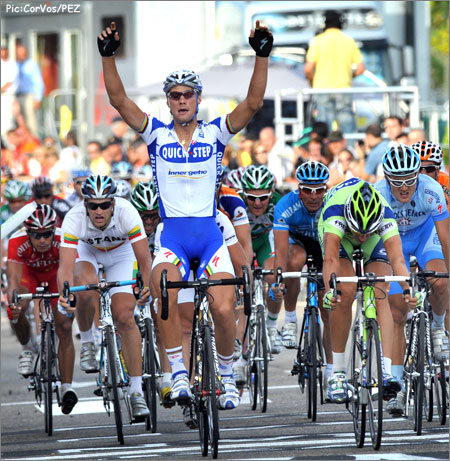 Boonen made the last right hand bend on the right hand side of the road with Pozzato on his wheel, and managed to take the victory with relative ease over the bike-throwing Italian. 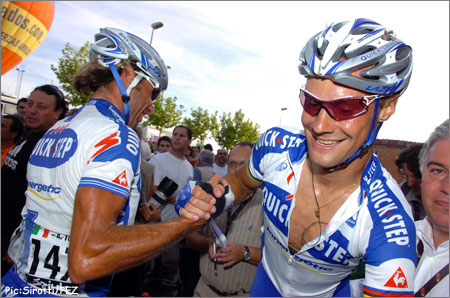 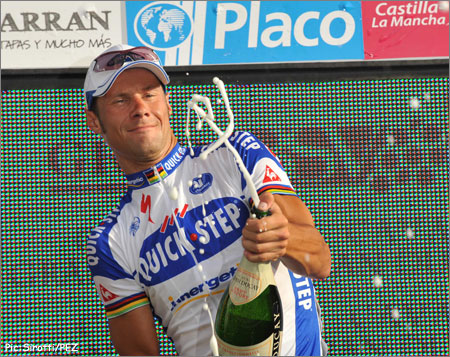