Race report: What looked on paper like a standard, run-of-the-mill transition stage, turned into an attack-fest. A big breakaway group put minutes into the peloton, some big names bailed out before the start ….. and we have a winner that some of you might not even have heard of.

Normally employed as one of Alejandro Valverde’s domestiques, Imanol Erviti takes the top step of the podium, for the first time in his career so far. The 24-year old is a classic rouleur – 6′ 4” and powerful, and he had just enough in the tank to edge Credit Agricole’s Nicolas Roche in the photo finish and David Herrero Llorente of Xacobeo-Galicia. 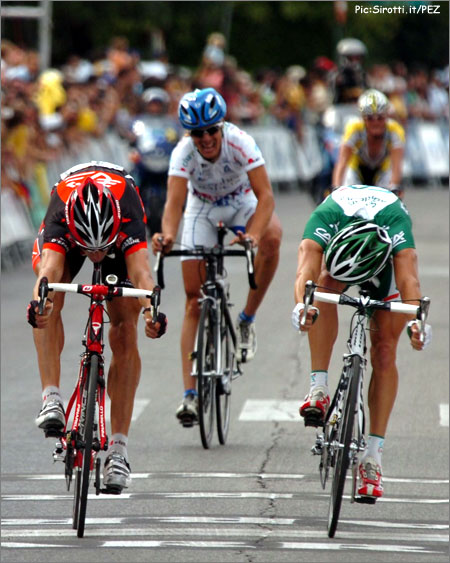 Alongside Vasil Kiriyenka, that trio represented the cream of the day’s 18-man (yes, 18) breakaway. And it was the cream – double world champ Paolo Bettini, Juan Antonio Flecha and points leader Greg Van Avermaet were among those on show.

Today’s special offer: It’s a gradual uphill procession today, as the peloton prepares to roar up the Alto de los Leones …………. roar …. leones …… geddit? Sorry. The riders won’t be too sorry, though – it’s only a third-category climb, about 6kms long, so it should be an easier day as the race hauls to a close.

It also offers a precious chance for a breakaway, so expect to see some action from the Spanish teams, and from the likes of Gerolsteiner and Milram who’ve not had the best of times since the race started. 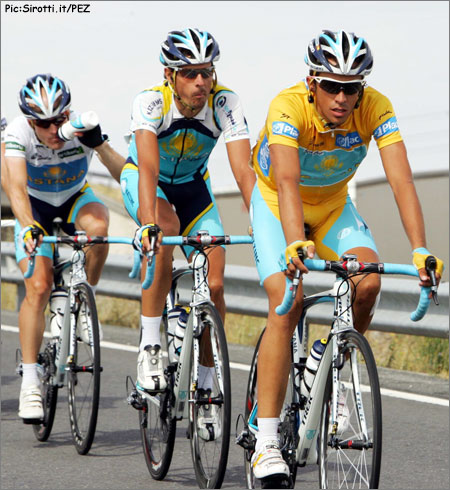 The uber-trio of Contador, Kloeden, and Leipheimer roll along…I can’t imagine what it would be like to add Lance to that. That has to be unfair or something.

The Belgian team management for the World Road Championships next week might just have been sending a few text messages last night – Tom Boonen, Philippe Gilbert and Nick Nuyens all heading home before the start.

Commence racing!: It was mental from the off, with attacks going as soon as the flag dropped. But it took a whole hour – raced full-on, nearly 50kms per hour! – to get the right ingredients in the bowl. Erviti was part of that initial mixture with Van Avermaet, Cyril Lemoine, Jelle Vanendert, Inigo Cuesta, Renaud Dion and Herrero. 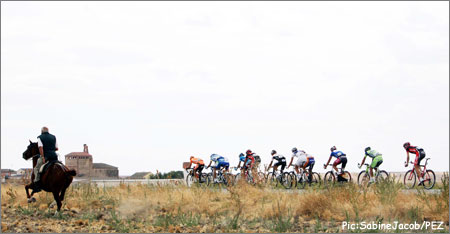 The 18-up break is chased by a horse. The horse was bored.

We had most of the key teams involved except Astana who’ve got bigger fish to fry, and Gerolsteiner who’d watched the ship sail without realising that was the one they should have been on.

The gap ripped out quickly – it was 8 minutes 30 seconds with 45kms to go. The peloton was switched off – they weren’t even racing for points so why stress out?

Greg van Avermaet ruled the intermediate sprints, to fortify his points jersey lead. The other breakaways knew they couldn’t just slipstream the Belgian flyer all the way to a stage win as happened on stage nine, so attacks were imminent. 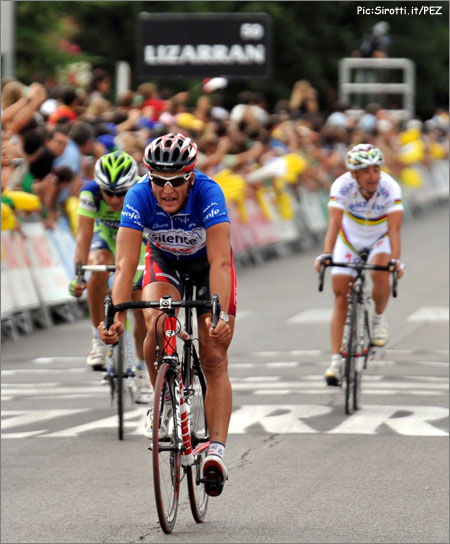 Greg Van Avermaet hoovered up point after point all day long and now has the points classification wrapped up nicely.

In the bunch, Gerolsteiner woke up and realised Oliver Zaugg would be bumped out of the top ten by Roche, so they worked to bring the lead down.

Bettini launched the first volley on the Alto de los Leones and split the lead group up – even on a category-three climb, the pace was enough to leave Franzoi and Roche gasping.

Off the summit, the attacks started in earnest. CSC with Cuesta/Kroon, Credit Agricole with Roche/Lemoine and Euskaltel with Perez/Landaluze looked to have better cards to play and tried to get clear by attacking one by one. 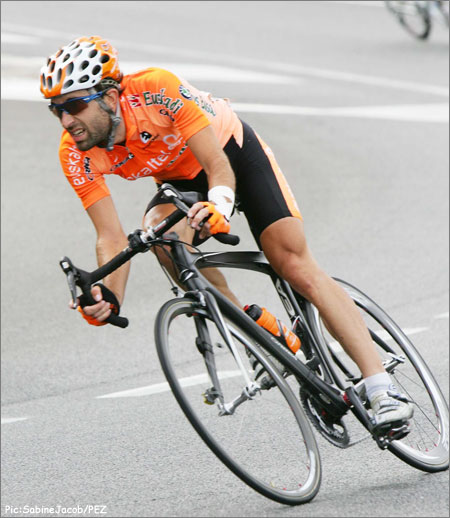 Inigo Landaluze was active, but couldn’t quite make that final selection.

10kms to go – Bettini is still active, but Lemoine and Flecha get away briefly. Garcia Acosta counters, and Flecha follows him. Cuesta is going into the red for Karsten Kroon and hauls it back together.

Garcia Acosta looks to go again, but has a rethink when he sees Bettini and van Avermaet on his tail – why bother towing two faster sprinters to the line?

It’s that moment of mental relaxation that someone else takes advantage off … 5kms to the line, and David Herrero jumps away on the ‘now-or-never’ attack. Only Roche, Erviti and Kiriyenka react and chase.

Herrero goes balls-out for about four kilometres then …. seems to wait for his chasers! The other three are on him, and although Kroon is chasing it’s too late to get on terms. 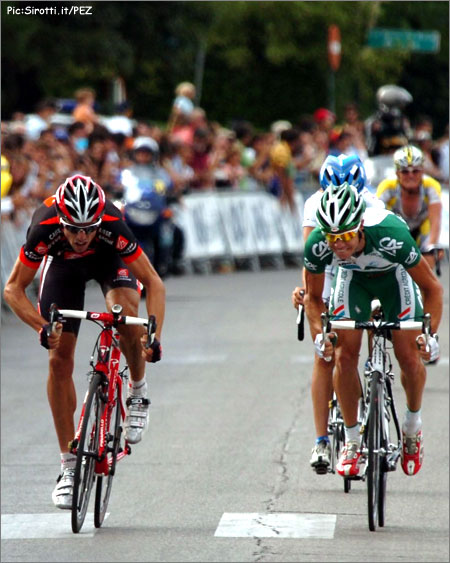 I bet that tickles.

Kiriyenka tries to lead it out from about 500 metres. Herrero is fried as Erviti and Roche go mano a mano for the stage win, and it’s the home rider who gets it … by a nose. 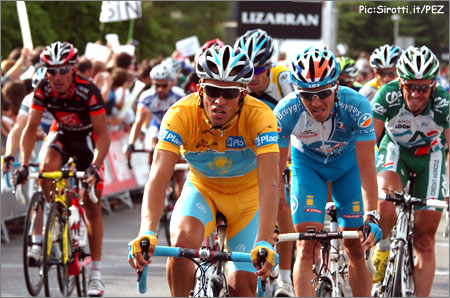 Alberto Contador was happy to be one day closer to done…me too.

The peloton trundles in over seven minutes down – a dress down Thursday in the office for Astana. 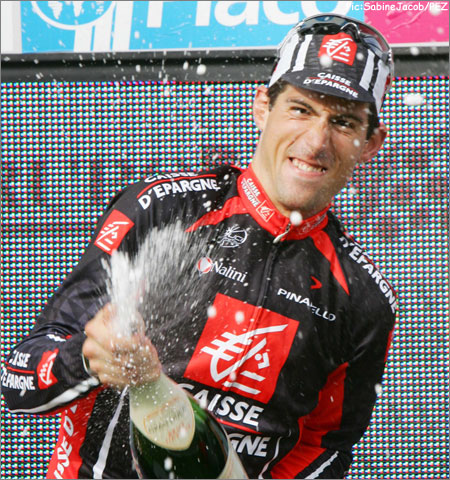 No significant overall changes, but tomorrow offers a couple of first-category climbs. Keep it Pez to see if the Astana public relations machine keeps a brave face on the not colossal 80 second gap between Contador and Leipheimer! 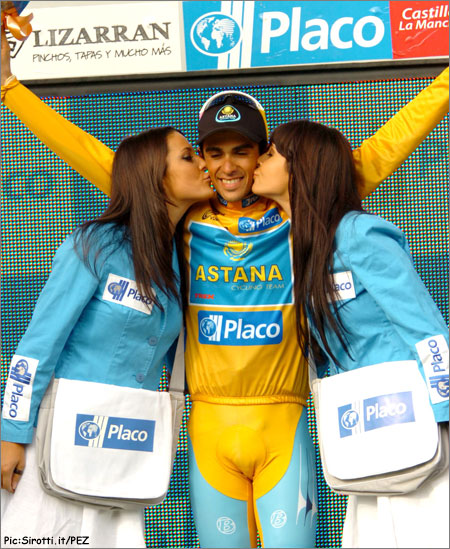 Yawn. No changes, nothing close to a change, nor will there be.