Race Report: It’s another boiling hot day in the sunny south of Spain, but there’s no chance of a siesta for the Vuelta peloton. Around four hours of full-on racing north to Jaйn should tell us whether Pippo Pozzato will hang onto the lead as the organisers chuck in a mountain on road stage numero uno!

Although the weather differed big-time from the first road stage of this year’s Tour de France, the outcome was the same as Alejandro Valverde snatched the win. The Caisse d’ Epargne chief outpowered Davide Rebellin and Alessandro Ballan on a tough finish.

Valverde got a major hand from his team, especially Joaquin Rodriguez who jumped for the line with 1500 metres to go. This made Tinkoff chase desperately, and Valverde rode their coat tails before calmly sliding past for the win, and putting daylight between himself and everyone else. 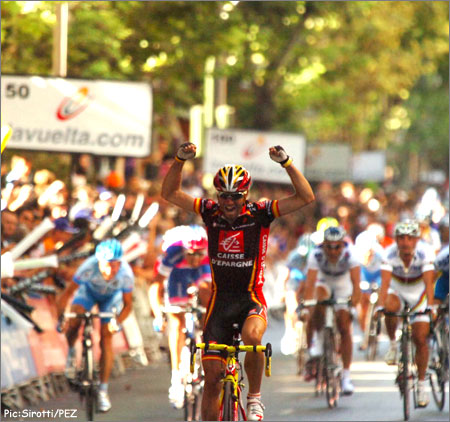 Nice stuff from Don Alejandro, posting a stage win early on. It looks like his squad are on form, but the bigger, high-altitude tests are still a way off and we’ll know better in a week or so whether this is another false dawn for Valverde’s Grand Tour hopes.

Four against the world this afternoon – Egoi Martinez from Euskaltel, who was only 8 seconds off the overall lead; Jesus Rosendo from Andalucia; Cyril Lemoine of Credit Agricole; and Tinkoff’s Russian rocket Mikhail Ignatiev. 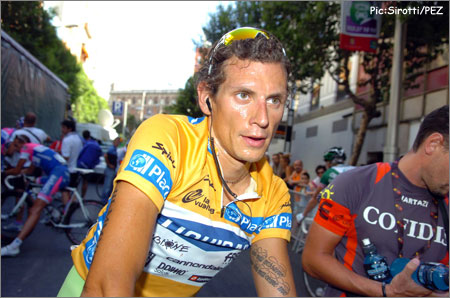 Pippo nearly kept his leader’s jersey, but Valverde was four spots better…and the bonus seconds gave him the overall.

Liquigas weren’t letting the time gap get too big and they kept the lid screwed down tightly in the first half of the stage – the route profile is lumpy all the way this afternoon which suited a long-range breakaway. After that, responsibility was passed to the sprinters’ teams.

Maybe the influence of Pippo Pozzato having kicked off the race with a “patron’s” moustache made Liquigas work extra hard? Whatever, he’d promised to shave it off after his first win in the Vuelta – so the ‘tache was gone this morning. 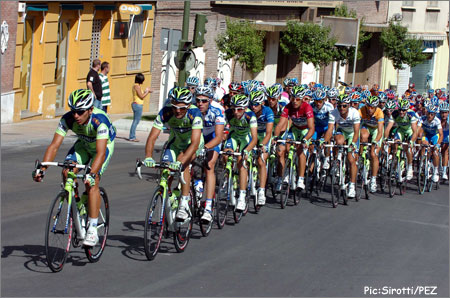 Liquigas had matters under control…until the finale.

Wearing the natty king of the mountains jersey tomorrow will be Jesus Rosendo for Andalucia-Cajasur. He crossed the Puerto de Huelma summit after 84 kms, ahead of his buddies, and could conceivably hang on for lots of precious premium podium time as there’s only two third-cat climbs between now and the start of Thursday’s ride to Toledo. 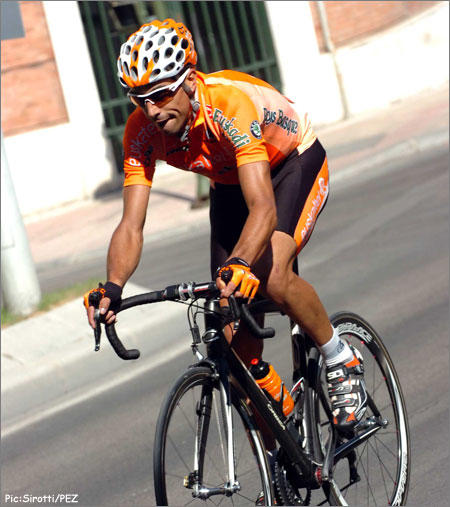 The 40k solo move was not the recipe for today, but it was a good effort from Martinez.

As the gap wore down, Egoi Martinez opted for the lone attack, quickly countered by Jesus Rosendo. Martinez trying to go solo with over 40kms to go, just as the leaders entered the finish town of Jaйn, looked a pretty desperate maneuver. But the front duo’s gap started to go out to over four minutes as Liquigas let QuickStep get their asses in gear at the front.

Soon enough, the breakaways were hearing the menacing chimes of doom: Lemoine and Ignatiev gave up, and were caught with 22kms to go. Caisse d’ Epargne and Astana came forward to finish off Martinez and Rosendo, picking them off just 20 kms from the line. 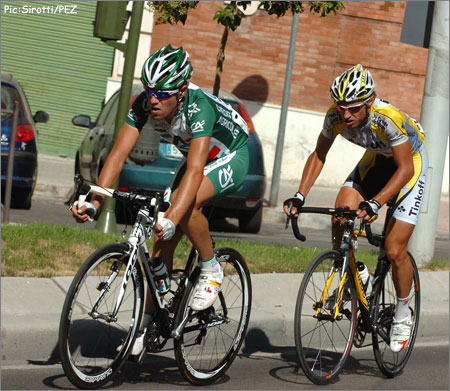 Lemoine and Ignatiev waiting for the pack to pick them up and an easy ride home after a hard day at the office.

The traditional counter attacks started coming, with Luis Pasamontes, Juanma Garate and Juan Antonio Flecha first out of the bunch. A small group of a dozen formed before Nicolas Roche gave it a one-man go.

Roche’s move morphed into a group of seven, with Moncoutie and Nuyens from Cofidis included. Daniele Bennati heard the chimes of doom, too, as he sensed a sprint was no formality. He hit the front of the peloton to show his Liquigas buddies how to chase. 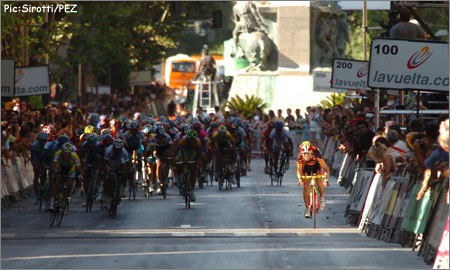 Benna’s efforts worked, and a three-man counter move was also swept neatly under the peloton’s carpet. All together going into the final kms, Liquigas and Quickstep worked hard to keep things tight until Rodriguez motored away and Valverde took full advantage and the winner’s bonus seconds. 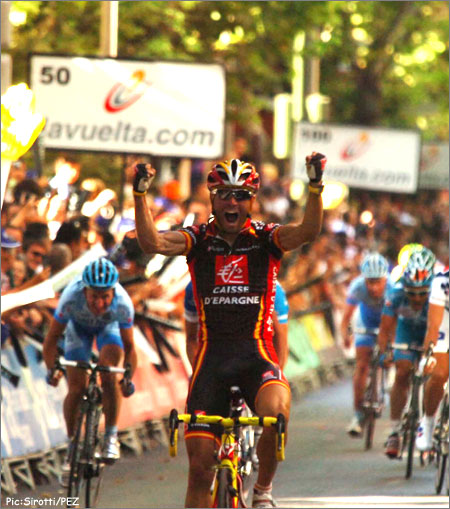 Pozzato gave keeping the overall a good go finishing fifth today. With Valverde now taking the leader’s jersey, maybe Pippo should have kept the ‘tache! You know what they said about Samson and Delilah! 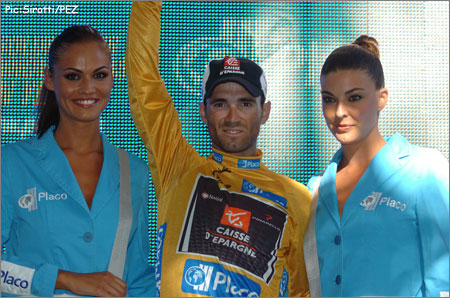