Race Report : A short mountain time trial stands between Alberto Contador and history, Leipheimer maybe a better man against the clock, but Bert has time and the Gold jersey on his shoulders and that always gives a rider wings on the climbs. Contador has also won a Giro and a Tour de France, so, let the battle commence!

The Mountain TT
17.1 kilometers, that’s the distance which will decide the overall winner of this Vuelta a Espaсa as tomorrow’s last stage to Madrid will be a lap of honor. The course starts flat out of La Granja de San Ildefonso for the first 9 kilometers until the start of the climb to the Alto de Navacerrada – 8.1 kilometers long with an average slope of 6.7% and a maximum of 9% as it rises 680 meters. Not super hard, but it could change some of the overall placings. Spanish newspaper ABC has no doubt of the outcome as it headlines with “Navacerrada crowns Contador’s 15 golden months.” 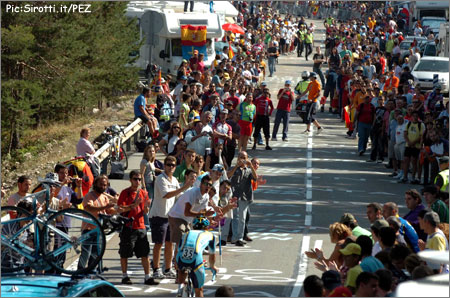 The battle today will be for the lower placings as some are very close to each other, Mosquera is only 54 seconds behind Carlos Sastre for third place and there is only 2 minutes covering 10th to 14th places, there could be a team battle between Valverde and Rodriguez Oliver as there is only 5 seconds between them for 6th.

So to the Race
The first rider off, at 2.45pm, was Dmitriy Muravyev of Astana, his time to the first time check at 8 kilometers was 11 minutes and 44 seconds and then at the second check at 12 kilometers he had a time of 20 minutes 42 seconds and finished with a time of 37 minutes and 1 second for the 17.1 kilometers. This was the best time so far, but that wasn’t difficult seeing as he was the first rider, we have to wait for the stars before we can get excited and they are not away from the start house until around five o’clock this evening. 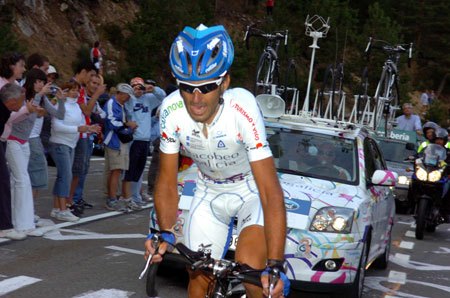 ‘Zeke’ Mosquera was once again great, but not quite enough to take down Sastre and the last spot on the podium.

Yesterdays News
Vasili Kiryienka has come out as the moral winner of yesterday’s stage as he worked like ten men to keep him and winner, David Arroyo away. Everyone admires his strength, but Arroyo does think the Belarusian was naпve and said “I told him I wasn’t going to take turns sharing the lead because our team’s main goal was setting up Valverde, he just kept going and in the end he was more like a teammate than an enemy.”

The other news of yesterday was the reported fall-out between Carlos Sastre and CSC team director; Bjarne Riis. Marca head lines with: “Sastre accuses his director of a boycott”. The article quotes Sastre “You have to be realistic. There is a person who has been creating damage and dividing the team from the beginning. He is still doing it and he has no interest in this team performing well in the Vuelta.” AS deals with the same subjects, opening with: “Carlos Sastre explodes and attacks Bjarne Riis.” Sport also mentions Sastre’s “attack”, although it centers on Leipheimer’s statement: “Without Contador, I would have won the Vuelta.” Well, no one ever said cyclists had to be rocket scientists! 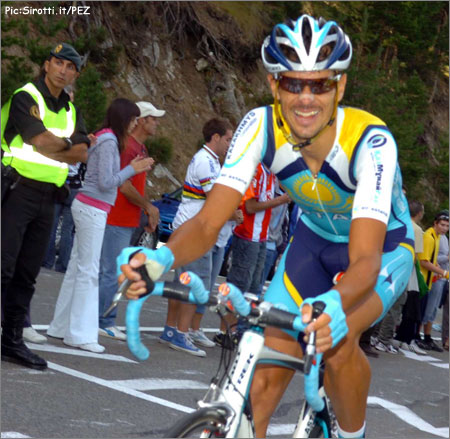 Kloedi rode a solid TT and finished out a quality Vuelta as uber-domestique to Levitador.

Back to Today
Most of the riders were using their normal bikes and in the case of Andreas Klцden (Astana) he had TT bars fitted, but no sign of any disc wheels. Klцden was the first of the top riders and he started at 4.35pm, so we only had around an hour to wait for the Gold jersey wearing Contador to finish and the final result. There were a few people on the course, but of course Spain was playing tennis against the U.S. in the Davis Cup at the same time live on TV.

Tinkoff’s Petrov returns a very good time that is soon bettered by Ruben Perez Moreno (Euskaltel) with a startling 35:15, this lasts for a while until Klцden beats him by 12 seconds. Rodriguez Oliver decides he can use a low profile bike unlike team mates Alejandro Valverde and yesterday’s winner, David Arroyo who sticks with their normal bikes with deep section carbon rimed wheels. Interestingly Valverde has a pedal rev sensor fitted, but no Tri bars. Fourth placed Mosquera is quickly down on his Tri bars as we see Carlos Sastre leave the start house, it doesn’t look like Riis behind the wheel of the CSC team car! 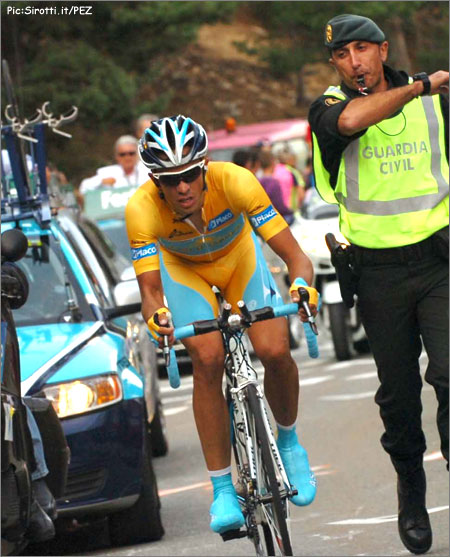 The Last Two Are Off
Leipheimer starts off smoothly enough, but with a wave to the crowds, Alberto Contador shoots out of the gate looking very serious, he has his normal bike with Tri bars and normal shallow section rims. All the top riders look fast at this point as the road hasn’t started to climb yet.

At the finish Lampre’s Marzio Bruseghin had taken the lead with 34:37, but the excitement was out on the course. 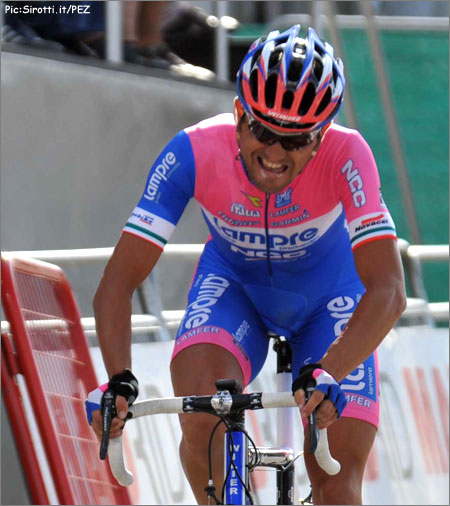 At the finish both Rodriguez Oliver and Moncoutie have better times than Bruseghin as the top riders hit the hardest parts of the climb, where there are many more fans on the road, Valverde is going for a good ride as he takes the fastest time at the finish of 33:37. Leipheimer catches his fan from Montana who today has smaller antlers? 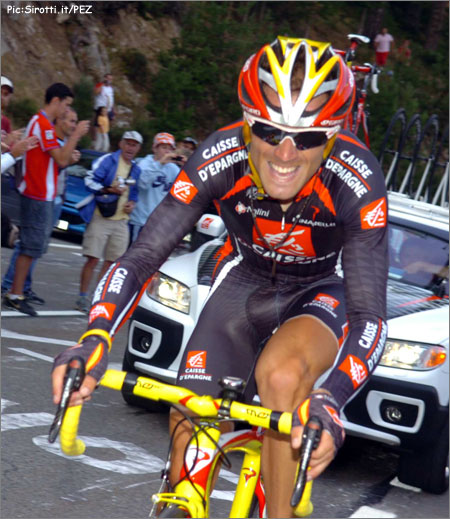 Valverde climbed to a top 3 today behind Levitador.

Mosquera finishes well but is 13 seconds slower than Sastre, so no podium for the brave man from the small team. Leipheimer takes the lead with a time of 33:06 as Contador fights his way through the crowds with police motos in front and police running behind to keep the fans in check. Alberto Contador takes second place 31 seconds behind Leipheimer to save his Vuelta. 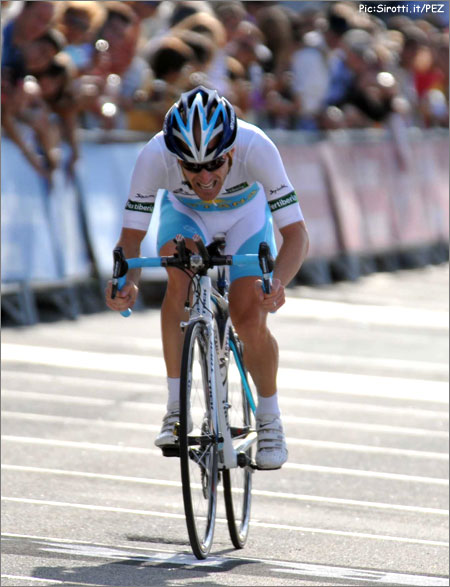 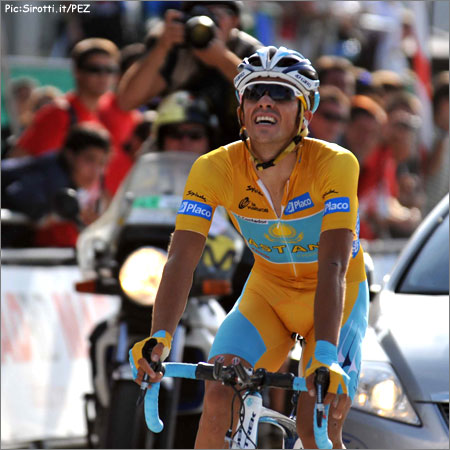 Another time trial win for Levi and a third Grand Tour win for Contador, “Bert” was the favorite going into the Vuelta, but it was still an exciting race. Just the procession in to the center of Madrid tomorrow and then it’s; bring on the World Champs! 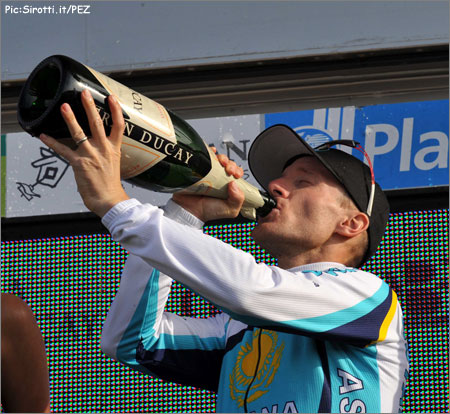