Race Report: Mountains! They are here at last! But so is the bad weather, rain, fog and the cold make the climbing hard, very hard! TV coverage is nearly nil as the helicopters can’t fly and the moto’s are water logged. This didn’t stop the action, just made it difficult see!

Stage 7 is from Barbastro into the Principality of Andorra, finishing with a hard circuit with two climbs of the Alto de la Rabassa, the first ascent is a 1st cat climb and then it’s up to the summit finish at 2050 meters, in the nature park for the special category climb. There is a 2nd and a 3rd cat climb earlier in the 223 kilometers stage (the longest) to soften the riders up for what will be the start of a very hard and decisive week. 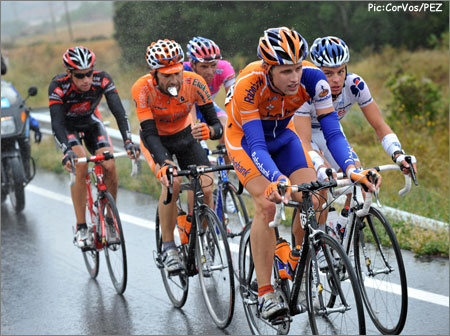 A small band of masochists assembled early to fight the field and the weather.

The Early Action
Very early in the stage five riders built up a sizable gap on a bunch that was maybe waiting for the brown stuff to hit the fan further on in the stage. The five were; Marc De Maar (Rabobank), Iсigo Landaluze (Euskaltel), Xabier Zandio (Caisse d’Epargne), Alessandro Ballan (Lampre) and Giani Meersman (FdJ). 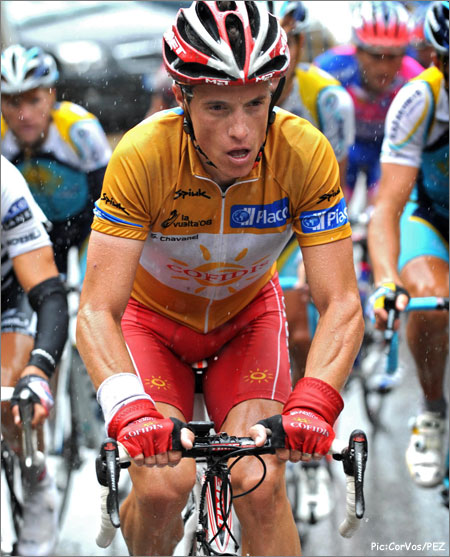 The lead group had built up a gap of nearly 12 minutes with 100 kilometers to the finish; this seemed to be their maximum as race leader Sylvain Chavanel had his Cofidis team to start the chase. Today’s bit of useless information; Chavanel’s grandfather is Spanish and from Barcelona, so he wants to keep the Gold jersey as long as he can. 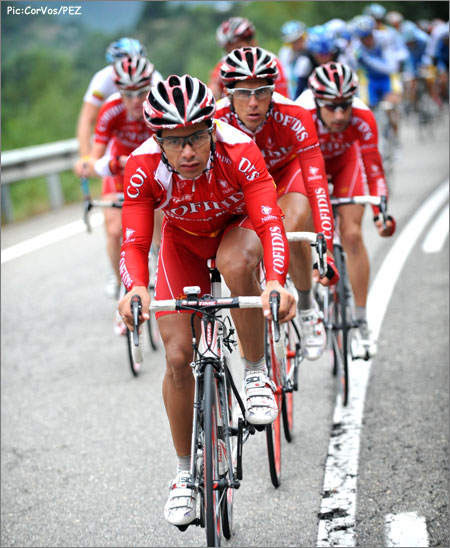 Cofidis earned the right to set tempo early on.

Iсigo Landaluze was the leader over the first climb of the Port de Montllobar after 64.4 kilometers, then it was the turn of De Maar to be first to crest the second climb of the 3rd cat Collado de Faidella with 112 kilometers to go to the finish line. In Andorra the weather is a lot colder than the race has been experiencing, at the start in Granada it was 37єC, at the summit finish on La Rabassal its down to 8єC and there is a chance of fog and it is raining. At the start in Barbastro it was wet, but this didn’t dampen Igor Anton (Euskaltel) enthusiasm, he wants to show his climbing today. 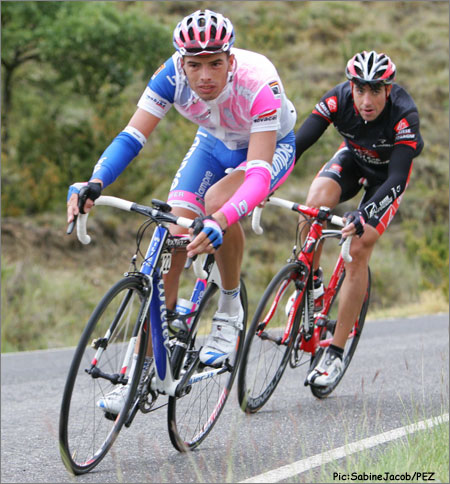 It was a crap, long day for the riders.

As the leaders entered the Principado de Andorra with 47 kilometers and two enormous climbs to go, the five leaders still had 8 minutes on the now Cofidis and Astana lead bunch, Ballan was the best placed rider at 2 minutes and 30 seconds behind the gold jersey.

The lead group starts to climb into the fog and split, but regroup on a small descent, its wild up here, and not even any sheep to watch the action! As the temperature at the finish has dropped to 7єC with heavy rain, the only good news is that there is nearly no wind! TV is having a hard job to show anything with the thick fog that is rolling in, except the half a dozen policemen wandering about the finish line in the rain, this year’s La Vuelta issue umbrella is in a very nice shade of red. 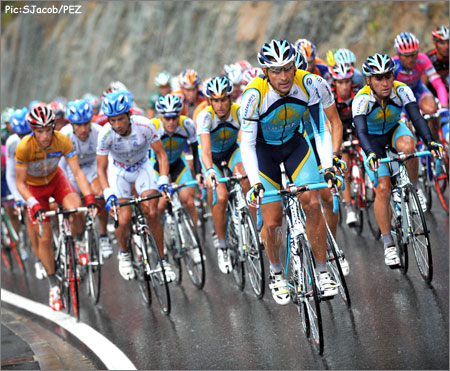 Astana took control of the proceedings as the race hit the ‘business end.’

The Action on the Mountain
The bunch behind are all following Cofidis, but Euskaltel and CSC are in very close attendance, they must be planning something for Anton and Sastre. As the leaders hit La Rabassa for the first time: Zandio (Caisse d’Epargne) is obviously in trouble as is Landaluze (Euskaltel), this leaves Ballan, De Maar and Meersmen to battle through the weather. Over the top of La Rabassa for the first time De Maar takes it from Ballan, Astana move to the front of the bunch and Paulinho, Rubiera, Klцden and Leipheimer lead through the thick fog. 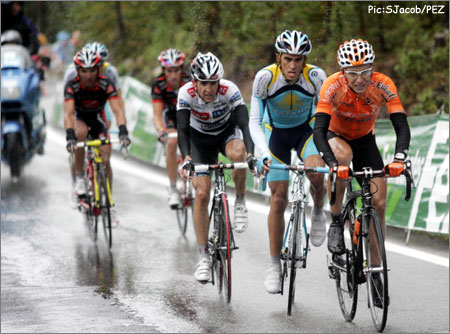 The race’s best climbers came to the fore today.

At the back of the bunch, the Gold jersey of Sylvain Chavanel looks to be taking the descent very carefully, not taking any chances as apposed to Landaluze up front who has re-caught Ballan, De Maar and Meersmen and gone straight past them for a slight lead, its possible that he has the wrong brake blocks fitted and cant slow down! 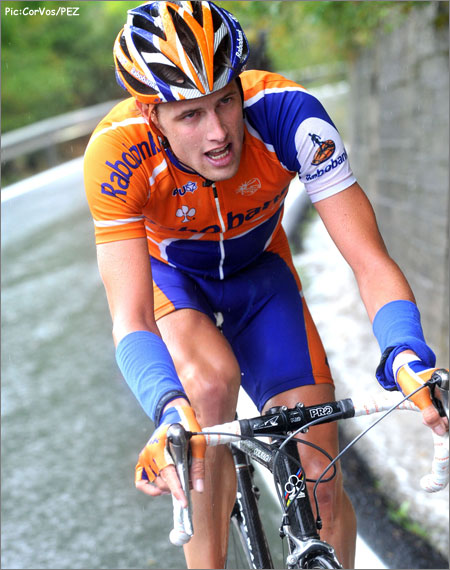 De Maar rode a solid day in the break, but got nothing from it, save a good workout.

The dropped Xabier Zandio is caught by Paolo Bettini (Quick-Step) and David Garcia (Xacobeo) on the descent and is about a minute in front of the main bunch and four and a half minutes behind the Ballan group. 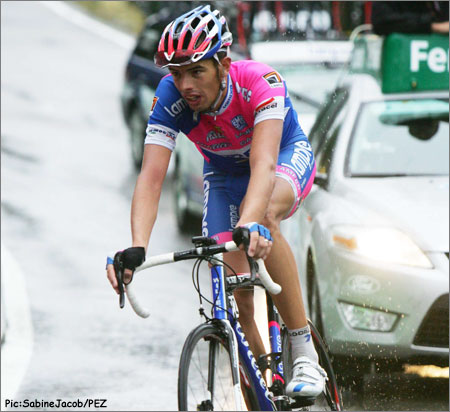 The final climb starts at 15.4 kilometers to go and it’s the classics rider Alessandro Ballan who wants the win and leaves the others to cross the line on his own after over 6 hours of suffering in the worst of conditions. The others who were with Ballan have disappeared and been passed. 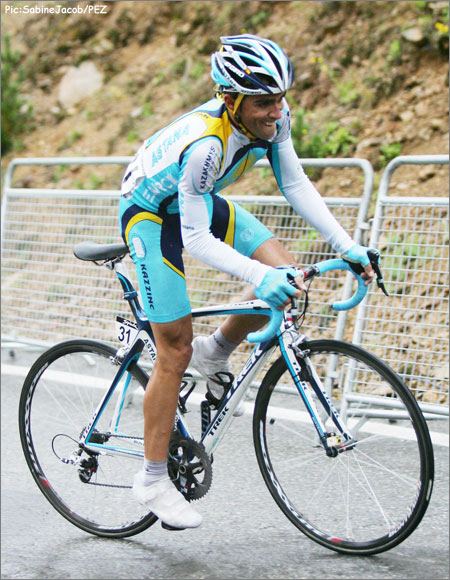 Contador looked solid today and had enough to jump away late to take some valuable seconds.

Behind, the bunch has split to pieces and Contador is not taking any chances and leaves the group of favorites; Valverde, Anton, Leipheimer, Rodriguez and Sastre to take third place. A short time behind is Chavanel, the big question is “will he keep the Gold jersey?” 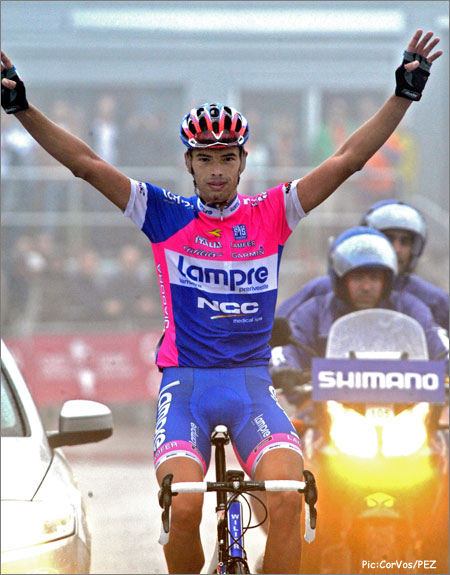 There wasn’t too much smiling going on over the line…it had been a hard, long day, and it was cold.

No, is the answer, Ballan has done enough to take the overall, the mountains and the combined competition jerseys; it’s a good day for Italy! Ballan has one last problem; he can’t open the Cava and in the end breaks the cork, so no spraying the girls and the photographers today! 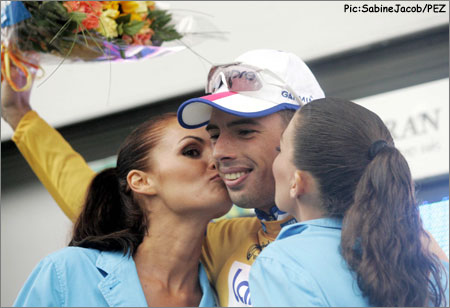 Tomorrow more of the same, four big climbs and more bad weather, stay PEZ for all the action, if we can see it through the rain?