Race report: Another day, another breakaway goes the distance. The gold jersey gets another new home as a young gun snares his biggest win yet. Is this proof that cycling is cleaning up? Whatever, the bigger teams don’t seem to be too able to reel the breaks back in after a long season. Or maybe they’re just not bothered about it, tactically.

24 hours after Robbie McEwen won the Vattenfall Classic, his natural successor in the Silence-Lotto set-up took his biggest career win to date. Unfortunately for Greg Van Avermaet’s ten breakaway companions, they made the cardinal sin of towing a noted sprint finisher all the way to the line with predictable consequences. 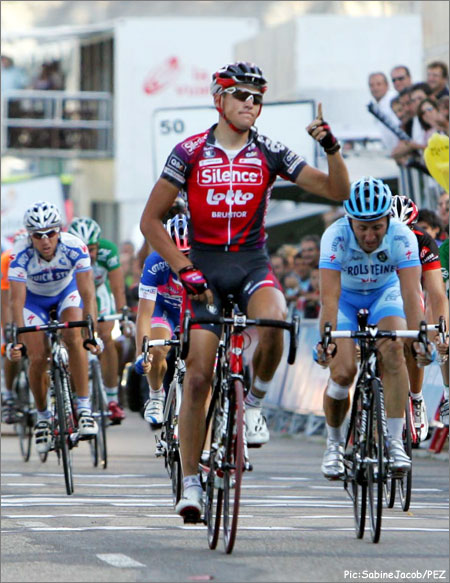 Martinez has a great consolation – after Euskaltel’s storming TTT last week, after hanging close by in the mountains, he steps into the gold leader’s tunic. That basically saves Euskaltel’s Vuelta, and takes the pressure off the squad. Cue a shed load of attacks in the next few stages from the orange-clad Basques. 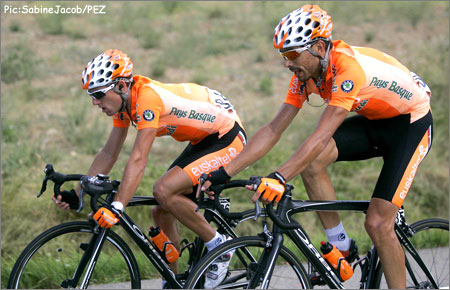 It was straight uphill today, and a dizzy sequence of attacks saw Bettini and Gilbert, Ignatiev and Tjallingi and a host of others trying to break clear. 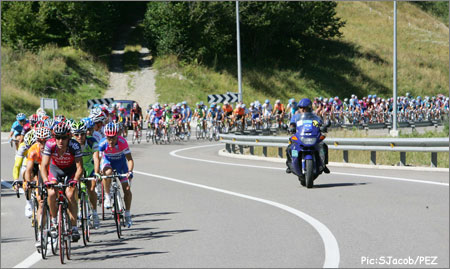 The break begins to form.

When things settled, it was a round dozen who made the break of the day stick. It was after the climb of the Col de l’Espina that they got together – Astana had been piledriving the main field and split it to smithereens, before deciding to cool their jets a little. 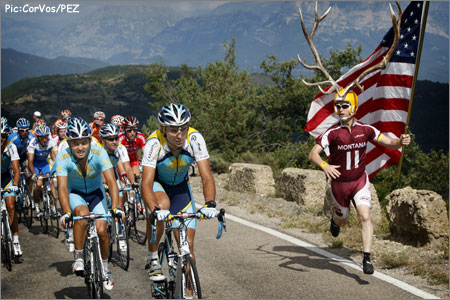 Astana pulled out their whips and bent the peloton over mercilessly.

The break took full advantage and roared out to a near seven-minute lead. Despite the jagged profile, it wasn’t a super hard day. Once they had such a lead, the peloton weren’t even going to be sprinting for points.

The break was still over six minutes clear when they crested the last big climb, 65kms from home. Bang on the limit of the breakaway’s magic rule – one minute for every ten kms if you want to stay clear. 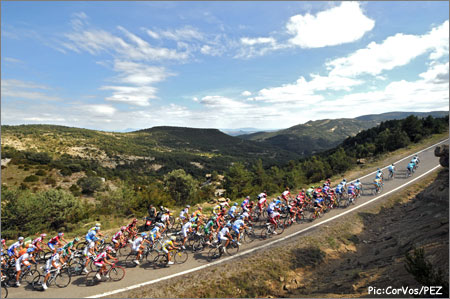 Mind you, even with Astana hammering the main field, the gap went out even more to nearly eight minutes inside the final 20kms. 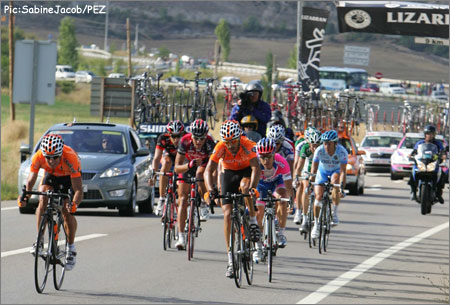 Flecha has basically zero chance in a sprint so it was no surprise when he attacked solo first at 5kms to go, with two Euskaltels (Martinez and Perez) chasing. They got him, and although Moncoutie had a go at the 3kms to go point, Martinez was so intent on keeping the pace up no one else was able to get away. 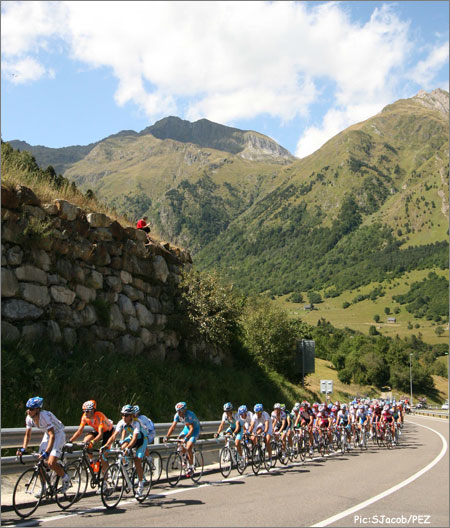 Not a bad backdrop!

In the chaos of a sprint for the line, Van Avermaet must have thought it was Christmas and creamed everyone for the stage.

Rebellin and Flecha are disappointed, Cunego even more so, but Martinez is celebrating the gold jersey. Nice work from the Euskaltel rider. Nice work from David Moncoutie as well – he’s opened a pretty handy lead in the mountains contest, so maybe his win yesterday has given him a bit of confidence. 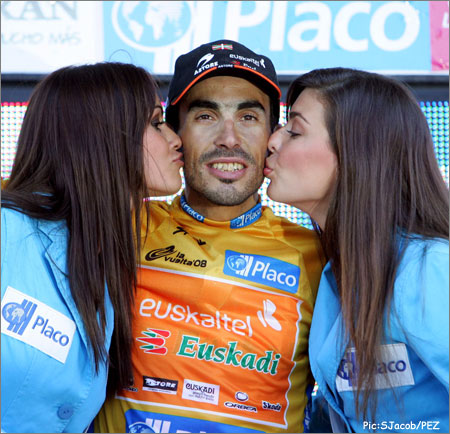 Astana lost the jersey (again), but it shouldn’t be too big of a deal in the long run. Martinez will be a very happy wearer.

As always, you can follow the very best coverage right here at PEZ – don’t touch that dial!

Toolbox: The Power of Cyclotherapy