The Vuelta is only a few days off. The riders are converging on Granada and this year’s climber’s paradise of a race is set to roll on Saturday. Five mountaintop finishes and barely any time trialing – all climbers, please step forward!

Your Winner
Let’s get right to the point – the Vuelta is Astana’s to lose, and more specifically, Alberto Contador’s. There, I said it, and it’s true. Contador is the best stage racer in the business right now, and for the first time this year, he’s lining up at a Grand Tour on what we would presume is 100% form. Even without the help of a second non-mountain time trial, Contador is the man to beat. Why? He’s still arguably the best climber in the race. 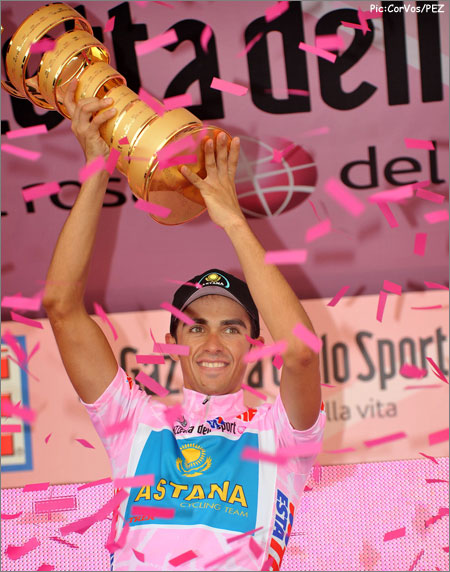 I haven’t even mentioned the other two heads of the hydra: Andreas Kloeden and Levi Leipheimer. Both came to the Giro in reasonable form, but nothing like what they should be enjoying now. Leipheimer just took a rare race victory over the weekend and Kloeden is his typical absent self before a big Grand Tour. 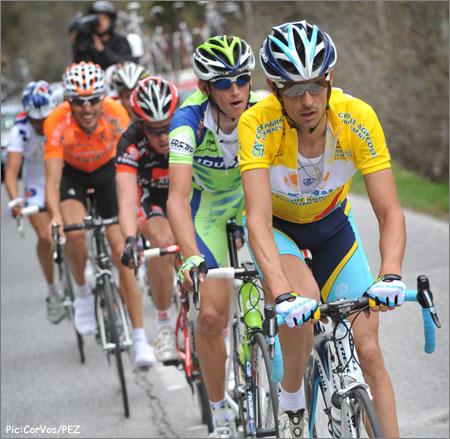 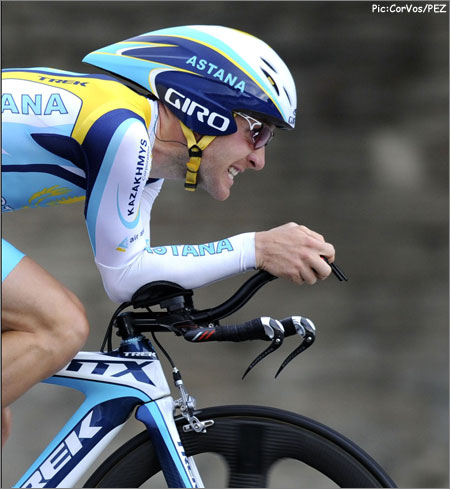 Mr. Leipheimer will be back in his normal Astana kit for the Vuelta and hoping for a big ride – after all, this is where he hit the big time.

The Spangermerican trio is every team director’s wet dream – three very strong time trialists, three very strong climbers. Kloeden is probably considered the weakest of the three in the mountains, and that’s scary.

There really isn’t much to say, besides: Alberto Contador. He’s arguably three weeks away from completing the Grand Tour trifecta at the whopping age of 25. He has two former Tour de France runners-up by his side, and a very capable team to back him up. 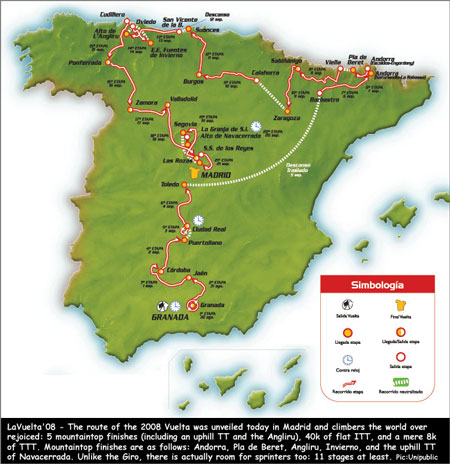 Don’t Take My Word For It
I’m not making this stuff up, apparently some bookie over at Unibet thinks so too:

Ok, So It’s Probably Not That Easy
Astana will still have their hands full for the next three weeks, five mountaintop finishes, 40k TT, uphill TT, and many a flat, windy stage. Two names come immediately to mind as possible vanquishers of the Astana juggernaut: Alejandro Valverde and Carlos Sastre.

Alejandro Valverde once again did not live up to his Tour de France expectations, but still had a good run of it with a stage win, a day in yellow, and some capable riding in the mountains…and plenty good enough form post-Tour to sprint to victory at the Clasica San Sebastian. 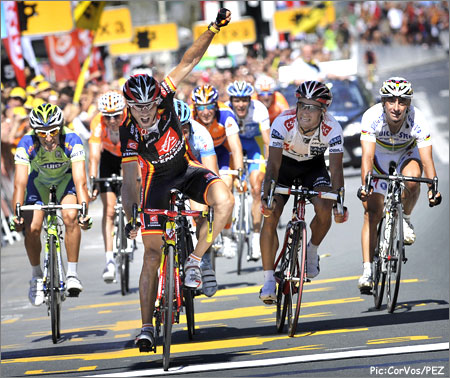 Valverde might not win the Vuelta, but he can probably expect at least a stage or two!

With Valverde, his main problem seems to be getting all of his many cylinders firing at once. When he’s on, he can time trial with ANYone, when he’s on, he can climb with ANYone, the only problem is that the on and offs are tough to figure out and the barnstorming TT in the Dauphine gave way to a middling performance in the Tour’s first TT. The guy who stayed with Lance and Rasmo in 2005, answers anything and everything at the Dauphine in the mountains, gets dropped inexplicably early on this year in the Pyrenees (and yes, I know the Dauphine is NOT the Tour). 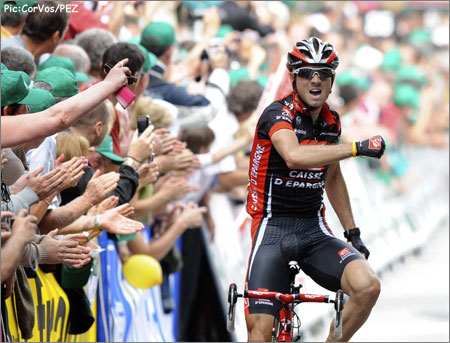 If Valverde has minded his form, tended sweetly to his delicate crop if you will, he can very well win head to head against Contador. He is Alejandro Valverde after all, and he’s fast. Just imagine it – Spain’s two brightest stars, both with the quiet spectre of Dr. Fuentes gleaming in their collective past’s duelling in the Spanish mountains: I love it.

Carlos Sastre can of course not be forgotten, but I’m going to go ahead and say it: Sastre would never have won the Tour de France if Astana were in attendance. I know I just opened a big can of worms with that one and it’s not Sastre’s fault, but I just do not think that Sastre is in the same class as Contador, barely even that of Levi and Kloedi. 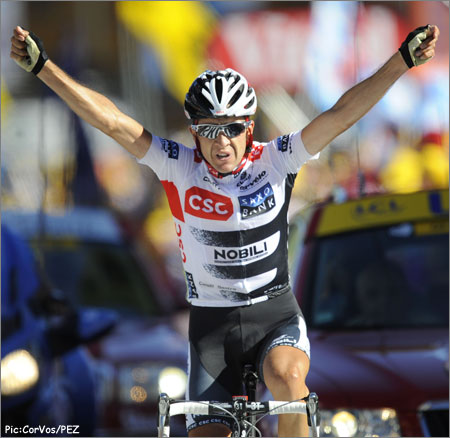 Carlos Sastre will, as always, be supported by an uber-strong CSC squad.

He’s damn good, no question, he IS the Tour de France champion and he climbs like he’s on Red Bull, but the magic and the good fortune that saw him to his Tour de France victory can’t possibly repeat itself. Well, it could, but that’s not where I’m putting my money.

The Interesting Case Of Lampre
Lampre is bringing a high powered squad to this year’s Vuelta, complete with Cunego, Ballan, Napolitano, and Bruseghin. Damiano Cunego is not the Grand Tour darling that he once was, but I don’t think it’s quite time to give up on the Kid just yet – he still is only 26 years old, and he still has a Giro and quite a few wins to his name. 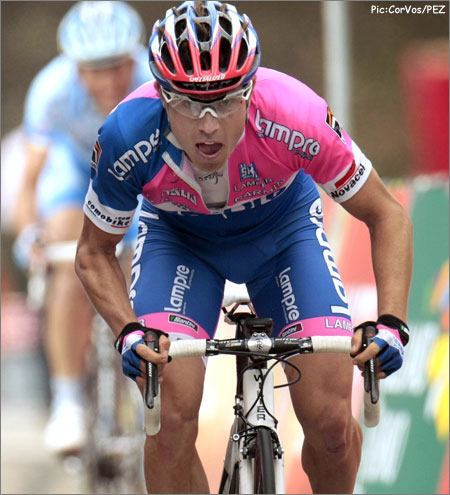 I have no idea what we’re going to get from the Kid in Spain next month.

Not everyone is blessed with the absolute perfect Grand Tour package like Contador. Cunego is definitely blessed with most of the package, and a race like the Vuelta in all of its climbing glory, has to be seen as a huge opportunity for Cunego, and a chance to salvage some pride in the year’s final Grand Tour. 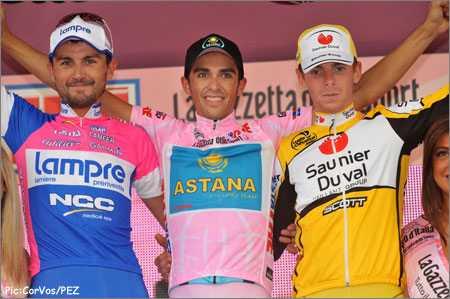 Besides the eternal Cunego question, Lampre has Bruz on hand as well. If Marzio Bruseghin comes to the Vuelta with the same form he rode the Giro with in May – you’d be a fool not to be thinking podium for the massively underrated rider. He kept the best Grand Tour rider on the planet along with the doped up best climber on the planet in sight at the Giro – that should say more than enough about his abilities.

Other Notables
There are plenty of other names capable of animating this race in the mountains, but the star power of the names, for the most part, fades rapidly after this top tier of celebrities.

Ok, I lied, I see one more big possibility for this year’s Vuelta. Rabobank’s Robert Gesink, has to be licking his Dutch chops over this course and the youngster has no pressure, everything to gain, and an ability to go uphill with speeds akin to a rally car on Pike’s Peak. He won’t win, but the podium is definitely in the realm of reason. 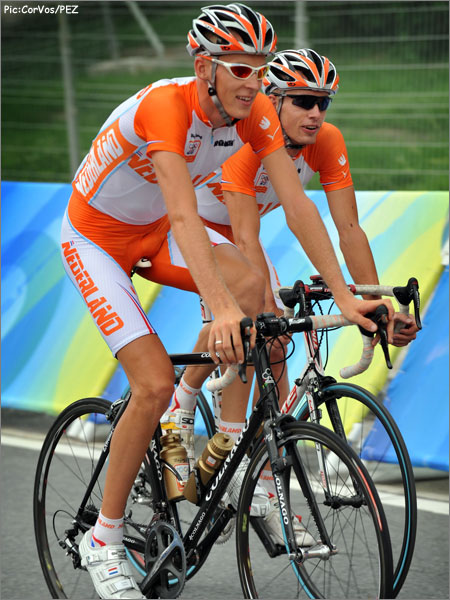 You could do worse than to put your pick on Gesink.

After that, Igor Anton of Euskaltel should ride his way into the Top 5ish, Francaise Des Jeux’s duo of Sandy Casar and Remy Di Gregorio have possibilities. I don’t know what all of the fuss about Gregorio is at the moment, but everyone keeps telling me he’s the next big thing, so I’d be remiss to not include his name in my nonsense. So at least if he does break through, I can say, well I mentioned him. Then there’s Yaroslav Popovych…the former darling of all things possible in bike racing. It doesn’t seem like it was all that long ago that he was a possible Tour de France winner, and now he’s a domestique trying to make breaks in the hopes of a stage win and keeping a good contract for another year. Maybe the Vuelta and the freedom to ride for himself will see him to the heights we all thought were possible five years ago.

Stage Threats
Six of 21 stages should go to the mountain men, leaving 15 others to be fought over by everyone else. That’s a lot of opportunity. At this point in the season, it would seem that there are three types of riders outside of the GC hopes: Worlds preppers, Contract pursuers, and the rest are just trying to get through and call it a year. The Worlds Preppers are many: Bettini, Boonen, Zabel, Freire, Flecha, Pozzato, Rebellin, Schumacher, Gilbert, Chavanel, Nuyens, Valverde, and Kolobnev to name a few of the superstar one day racers. 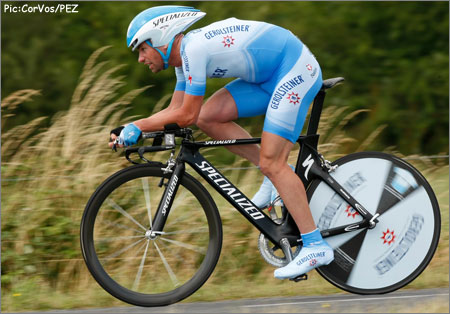 There’s a TT in the first week…Stefan Schumacher is getting giddy.

Schumacher has to be looking with intense interest at Stage 5’s Ciudad Real ITT. That would be three Grand Tour time trials in one year for the German. 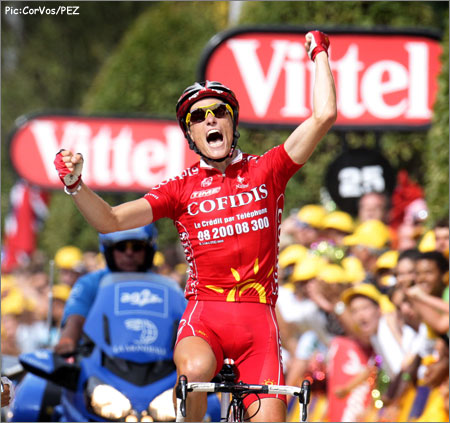 A stage at the Tour in July, why not some more in Spain in September? 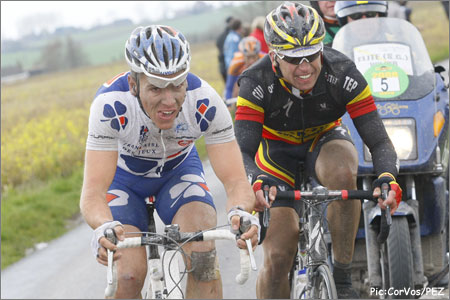 It’s about time for Philippe Gilbert to get going again – he’ll be using the Vuelta for some Worlds prep.

Boonen should pull in a few sprint stages, Bettini should net a tough finale, Freire will get his, and then maybe Pozzato, then Rebellin, with Chavanel, Gilbert, and Nuyens as least likely (in my opinion of course, and that’s not too tough to come by, it’s basically a listing of fastest finishers) 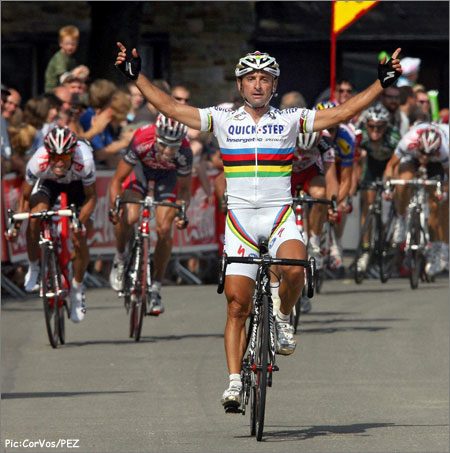 Bettini heads into the Vuelta in hopes of readying for Worlds #3 (in a row).

Those aren’t even the sprinters yet: Zabel, Napolitano, Bennati, Vaitkus, Haedo, Van Avermaet, along with Freire and Boonen. 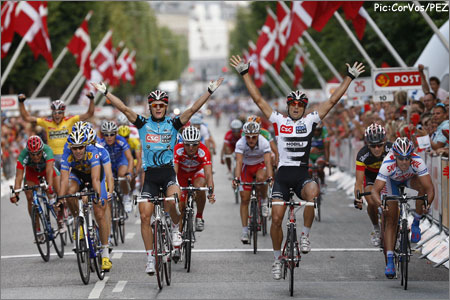 Methinks a stage win awaits Haedo in the near future.

As always, keep it PEZ for everything Vuelta!