Roadside St. 11: Another day in Murcia and I’m not sure if my cars suspension will take much more of the bad roads in this province! More narrow, twisting roads, but the weather was nice and I saw all our old friends from previous days and made a couple of new ones.

The stage start was on the Avenida Miguel Indurain, he had been here for the finish yesterday, but I think maybe the girls from William Hill’s had scared him off.

The Town of Murcia is actually quite nice with some very old buildings running along the river side, although there wasn’t much water in it. The oddest thing you can see in Murcia is as you come in from the south, which is not such a nice road, and you see this enormous cross on the top of what was once a Moorish castle, maybe it’s a Christ the Redeemer like the one in Rio de Janeiro! 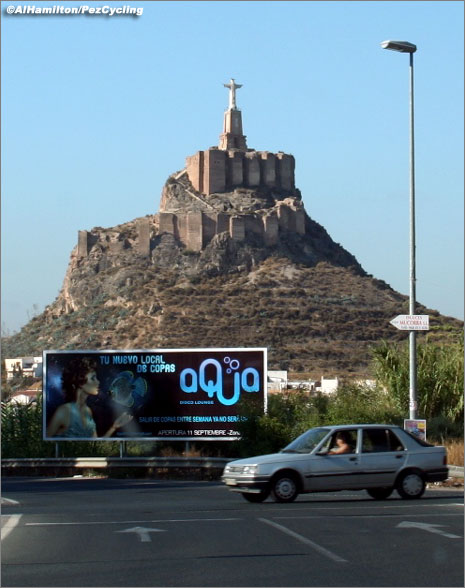 I rolled up to the entrance to the accredited cars only area with my home made “Prensa” plate, the guys there nearly wet themselves when I told them someone had stolen the original and I had made my own. The food in the start village was the same as previous days, so I’m not going to talk about tortilla again, there was some nice higos (figgs) that had been soaked in wine or liquor, but you can’t eat too many of those! All the girls were there, but things were quiet and most were at the bar. 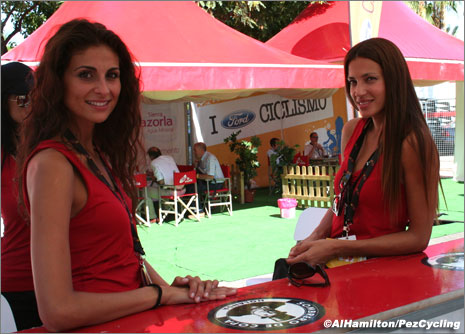 The guy who cooks with sun power was at it again, he doesn’t cheat either, no cooking the stew first, its all done by the sun. 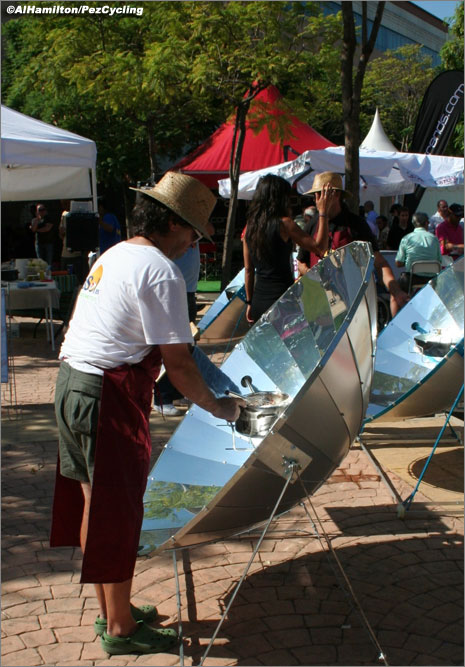 He also makes coffee the same way and it was very popular with everyone especially the riders after they had signed on. 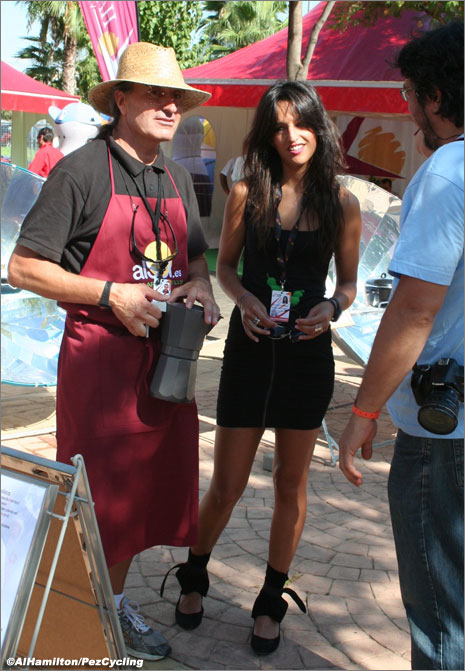 The girls in the village also have to set everything up, it’s not all glamour. 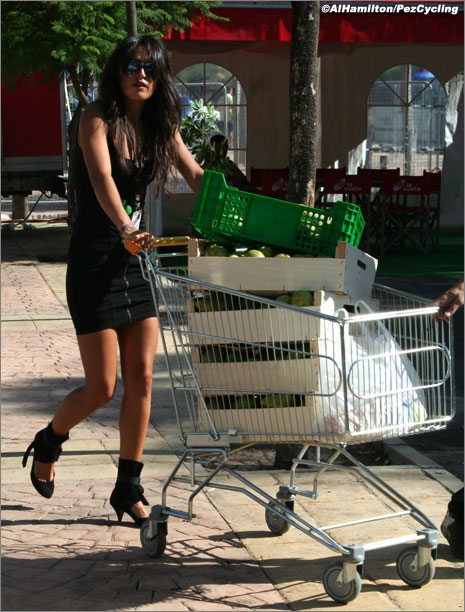 But these girls make the work look just that bit nicer. 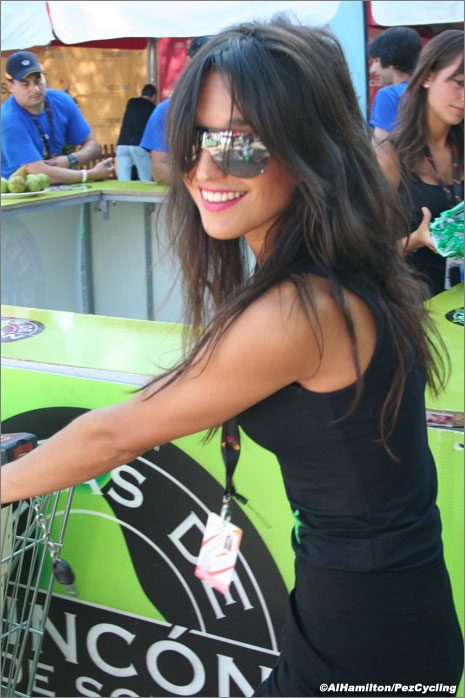 Even if, just like the rest of us, they can’t get a shopping trolley to go where they want! 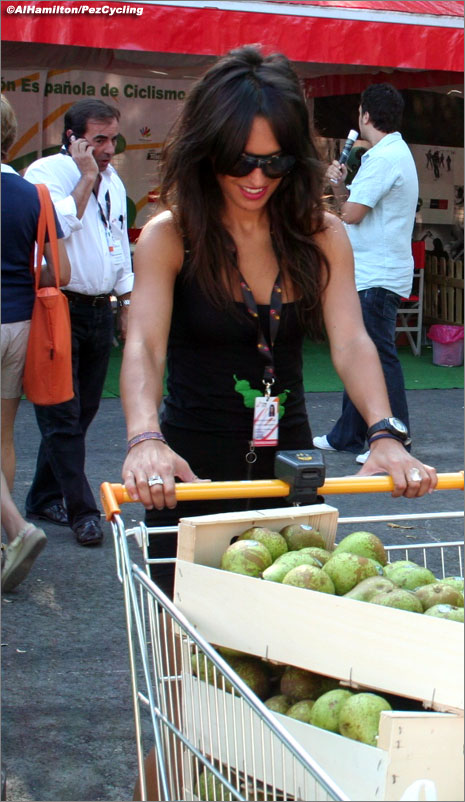 One of the new stands is for www.strands.com which is a sports training log web-site with tips for all different disciplines, including cycling. The site is very interesting, I had done my home work and checked it out earlier, but I must admit the young lady clinched it. Sorry guys the lucky young chap with her is her partner and was Spanish junior steeple-chase champion. 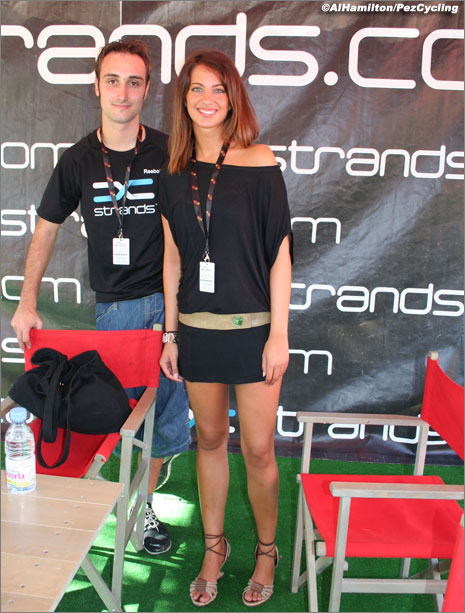 Out at the sign on the bikes were lined up and the riders were getting ready for the day’s action. 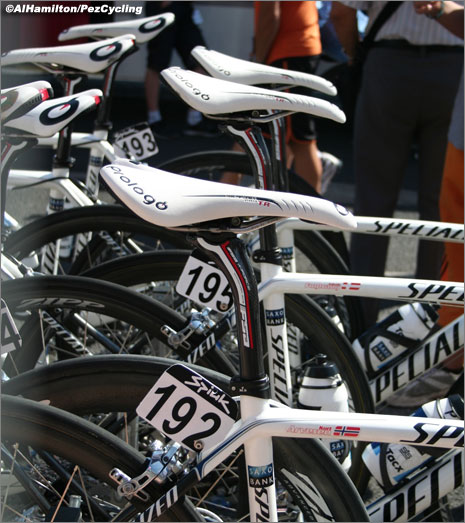 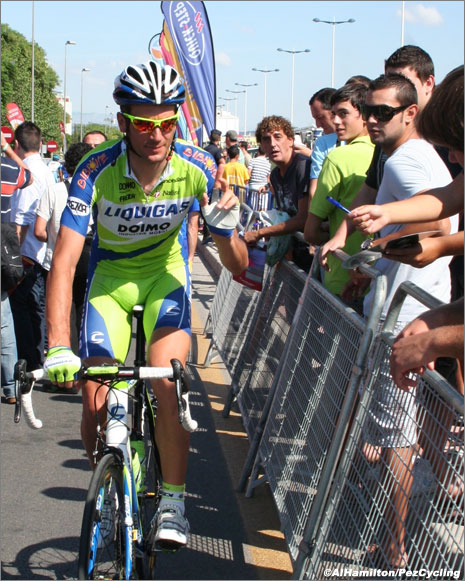 Ivan Basso had a word with some fans; he is so cool that he must be waiting for next week to make a move, on the hills he just smiles as he climbs. 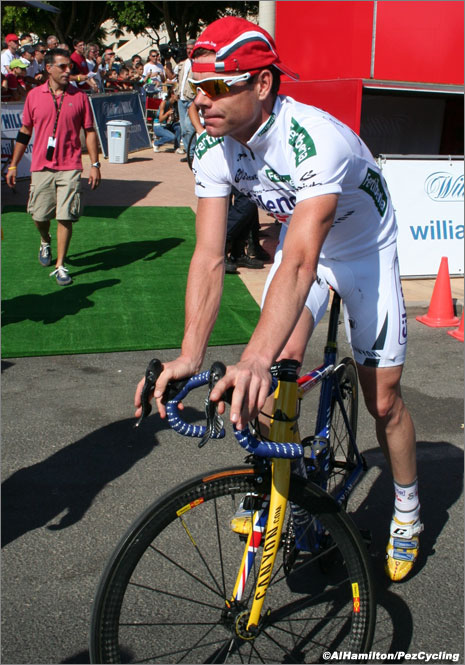 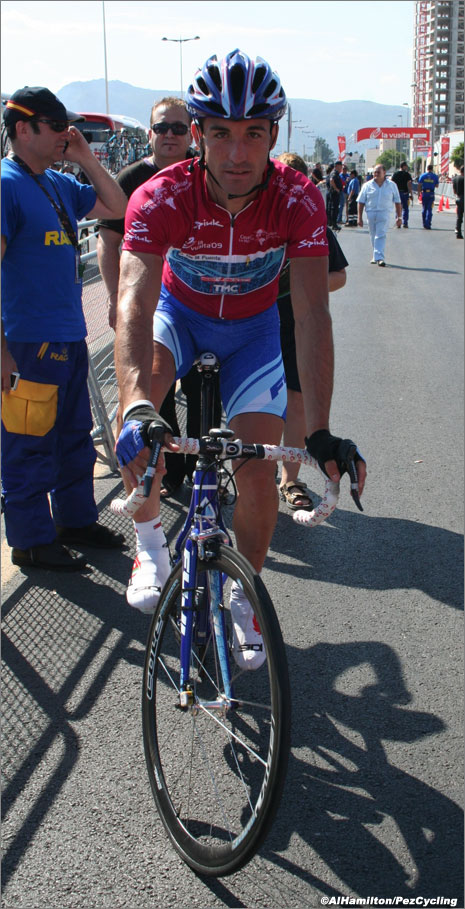 Cadel Evans and David La Fuente were happy in their respective leader’s jerseys, for sure Evans would rather be in Gold and La Fuente will have his work cut out to keep the mountains jersey to Madrid as there are some hard climbs still to come. 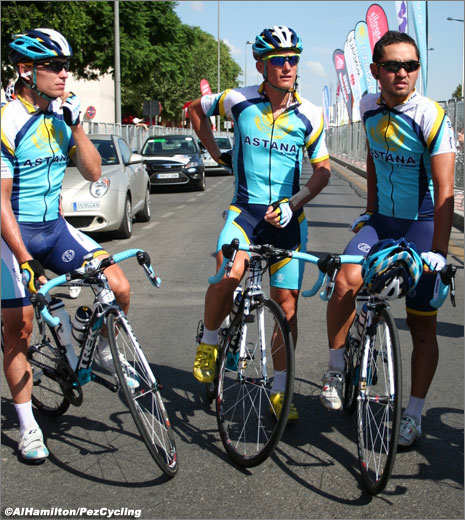 Alexander Vinokourov and two of his Astana mafia – er, mates – were discussing the stage, he nearly did it yesterday, he won’t be finished yet, maybe not an overall win, but a stage win isn’t out of the question. 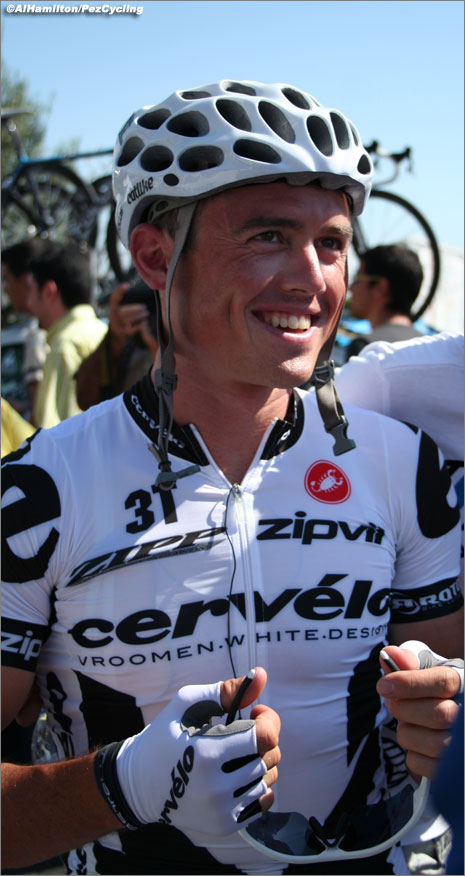 Yesterday’s winner Simon Gerrans was having a chat with David Millar, Gerrans happy and smiling, Millar was his usual self. 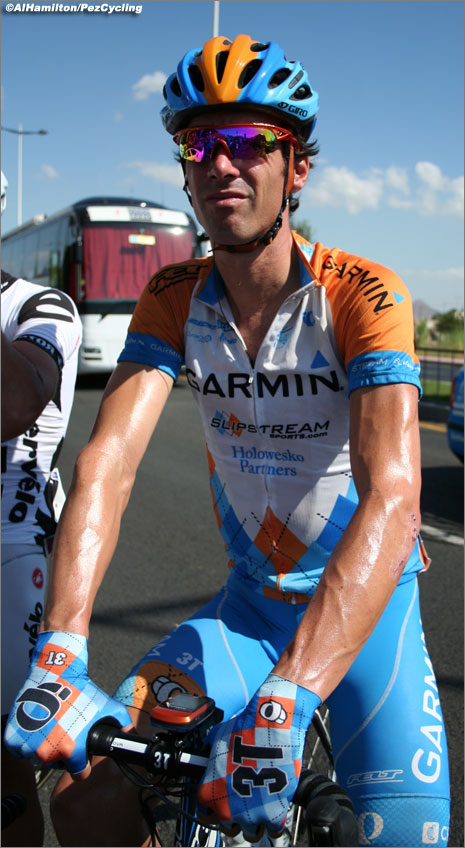 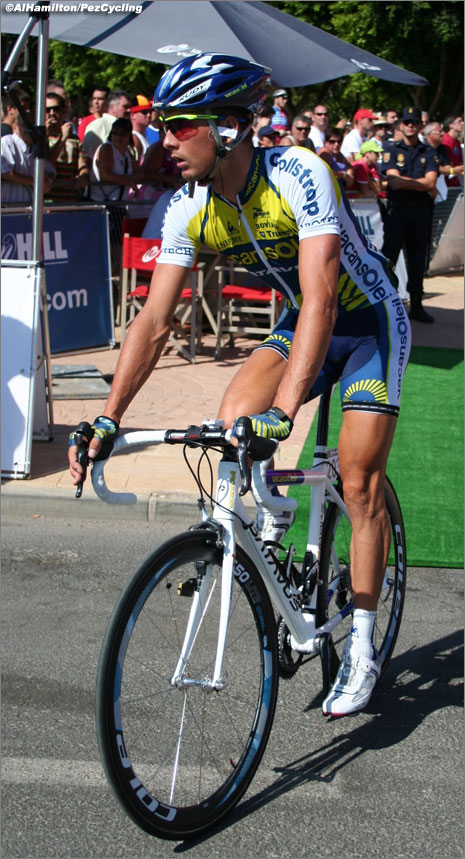 The revelation of this La Vuelta has to be Vacansoleil’s Johnny Hoogerland, he always receives a big cheer from the crowd in the morning and maybe by the end of the Tour the announcer will be able to pronounce his name correctly. 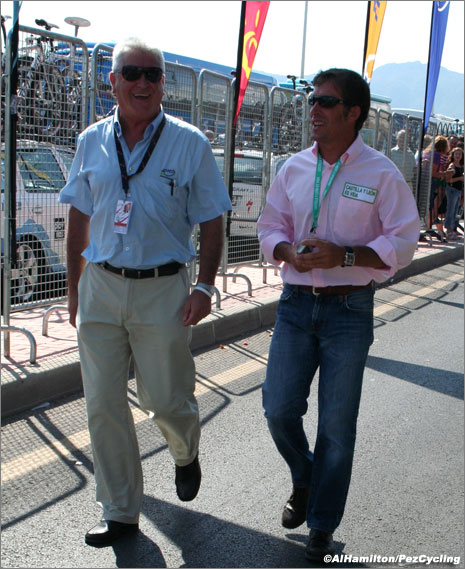 As I made my way back to the car, I spotted TV commentator, Vuelta and Tour winner; Perico Delgado, he still looks fit, but he is seen regularly riding his bike in a car insurance advertisement.

I drove out of town in front of the race, so the only information I had was from the radio and there was a break forming before the climb of the Alto Collado Bermejo in the natural park of the Sierra Espuсa mountains. The road passes through dry land before making the 10.7 kilometre climb up to 1225 meters altitude, it seems to go on forever on narrow roads, I was glad to be following the Guardia Civil cars up there. 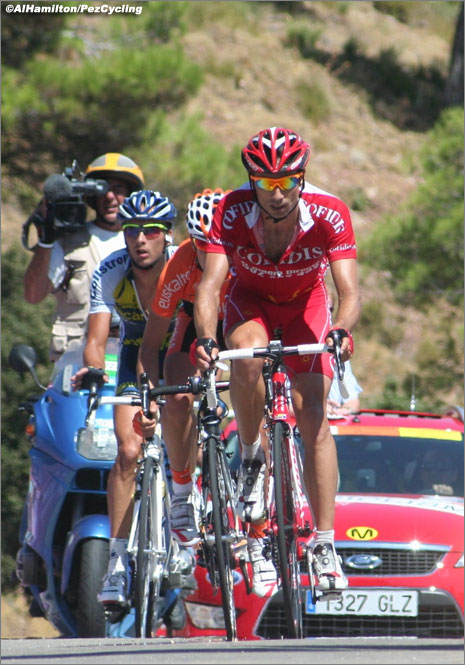 There weren’t as many people at the summit as the previous stages, but a good gathering to cheer first; the leading three riders. 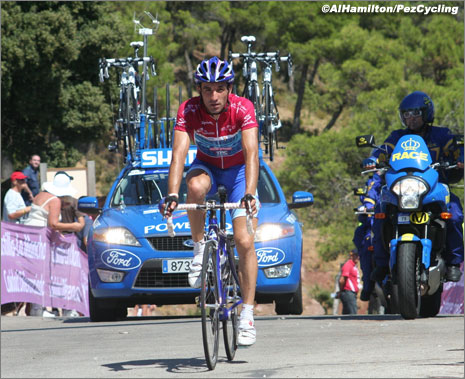 They were followed by David La Fuente gathering more points. 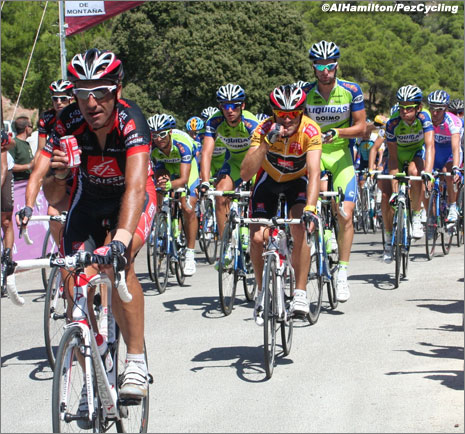 Then Caisse d’Epargne led the bunch over with their freshly grabbed coke cans. 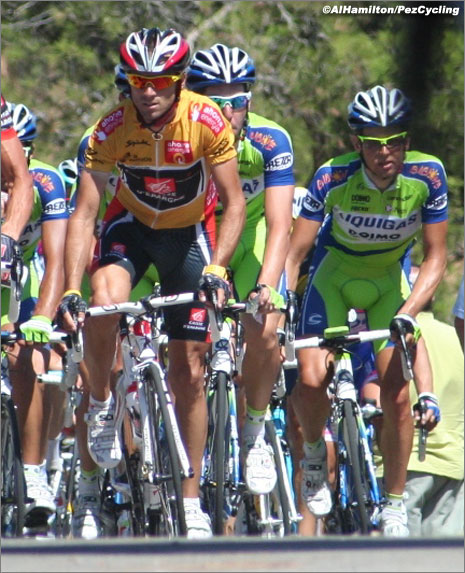 Alejandro Valverde was near the front, I think Gold suits him, but will he be able to hold onto it? 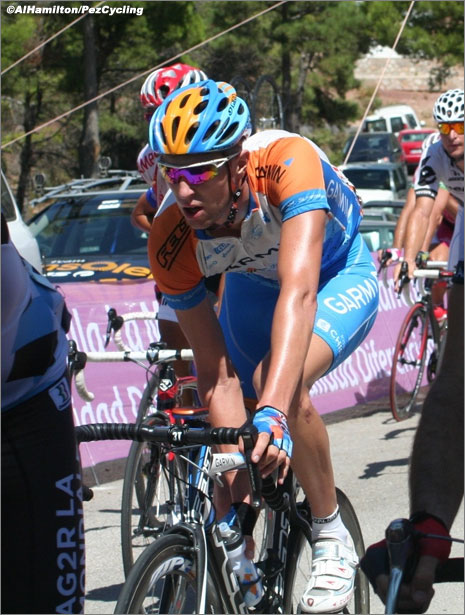 Yesterday’s star rider; Ryder Hesjedal was in the group, taking it easier today. 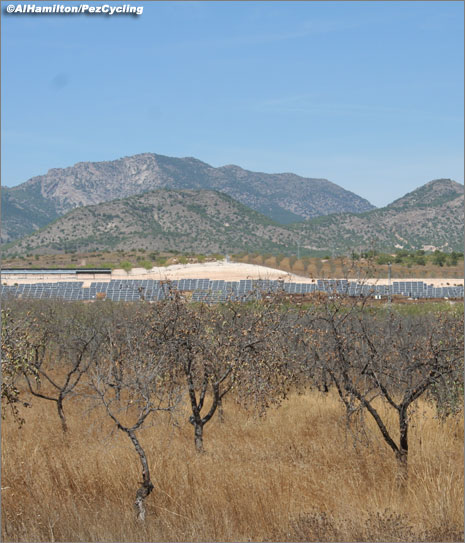 There was no way I would make it back to the finish, so I went home hoping I could finish editing the photos and writing the article and get to bed before 1am for a change. On the way I saw a field of mirrors, it could have been the cooking bloke gone mad, but it was a solar energy farm. It would be a good idea if Murcia spent the money they save with solar power on their roads, please. 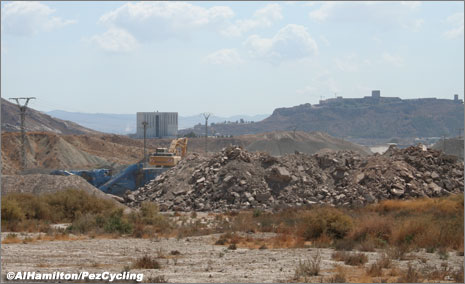 This last photo sums up Murcia for me; an ancient castle on the hill, a concrete factory and unfinished construction. The roads might not be as good as in the Valencia region, but the racing has been hot!