Roadside Pez: Alejandro Valverde is in the Gold jersey, and he is on home soil: Murcia. He held onto his leader’s jersey and had his kids on the podium with him, what could be better? Not much I guess, although I did have a few problems with the fine Murcianos. Let the story unfold!

Last time I was covering a Vuelta stage in Murcia it rained, which was a surprise in this very dry area, and roads were either motorways or they were narrow and rutted, so the plan today was to do some course hopping from the start (for obvious reasons), then first to the town of Aspe, and then onto the hill 11 kilometres from the finish in the capital city of the region, also called Murcia. 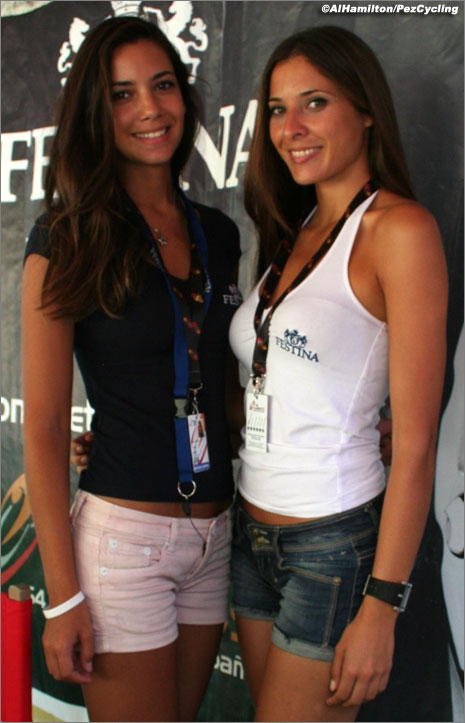 Alicante has a big castle and a big beach, but nothing much else to mention. The castle is only famous because this is where writer, Frederico Garcia Lorca, was imprisoned before his murder in 1936 during the Spanish Civil War. The beach…well you know what beaches are for. I had better things to look at! 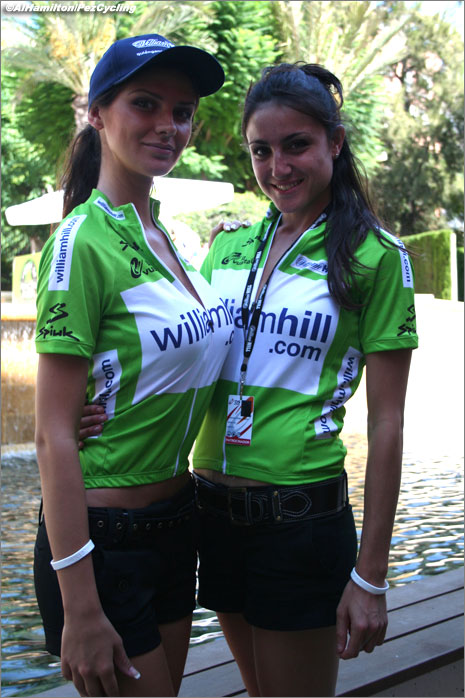 I seem to have managed to acquire my own tent with seats and table. It’s next to the Festina tent, and no one uses it. It’s in the shade and has a continuous passing of promotion girls and, most importantly, they keep leaving food on the table. I get people asking me if they can have some as I’m trying to read that day’s AS. Also, the team from William Hill comes and sits there and, of course, their girls too, which is nice! Two of the guys were going up in the VIP helicopter today, but the boss; David Hood was looking after the girls for the day, mmm close call David!

On today’s menu was the usual tortilla, but also there were these small cake things with tomato puree in the center. On the other plate there was also a normal tortilla with garlic mayo and then in the spoons there was a mussel in tomato or a seafood tasting white stuff! All very tasty.

The day’s strange food: cups with raspberry jam at the bottom, then a white soft cheese covered in honey on top, not sure if I’d like it, but it was good. It reminded me of my favourite race food of ham, cheese, and jam sandwiches. 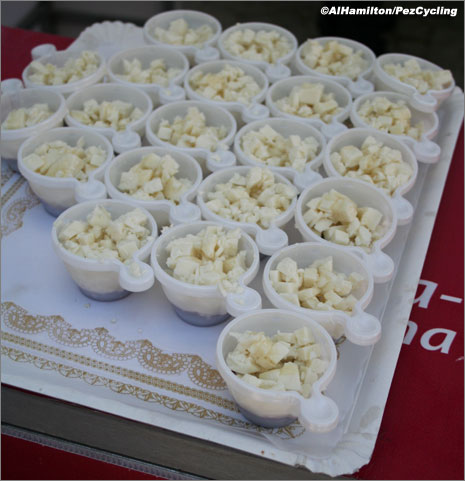 One of the stands in the start village is selling “cooking with the sun” which is a great idea if you live in a sunny place (forget Scotland). It’s basically a big bowl/mirror thing with a shelf in the middle for the pot or fryer and places for smaller pots either side. All the food the chef was cooking smelt great and was bubbling away. Rain might ruin the soup though! 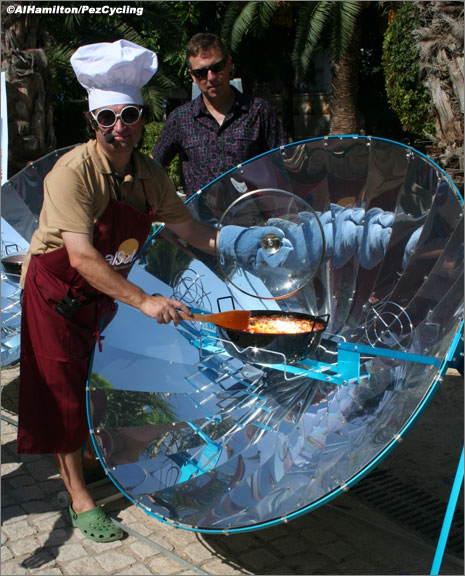 Time to go out and look at cyclists. Tom Boonen was being mobbed as usual and Cunego was laughing and joking with people in the street. 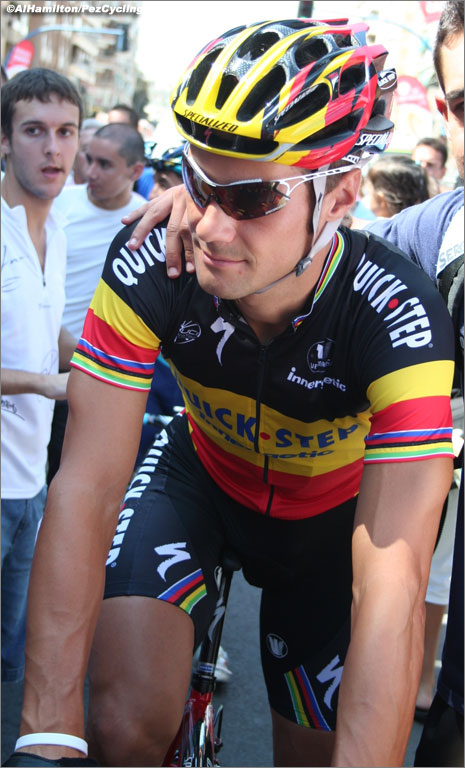 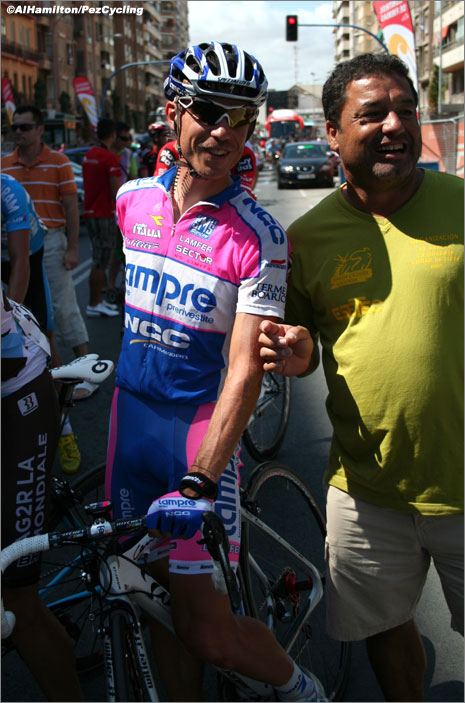 I tried to get a photo of “local hero” Alejandro Valverde, but there was no chance, you couldn’t see his Gold jersey for fans, photographers, and TV interviewers. Yesterday’s late starter, Sammy Sanchez was at the back again, this time the doctor had come to him instead of him missing the start gun. 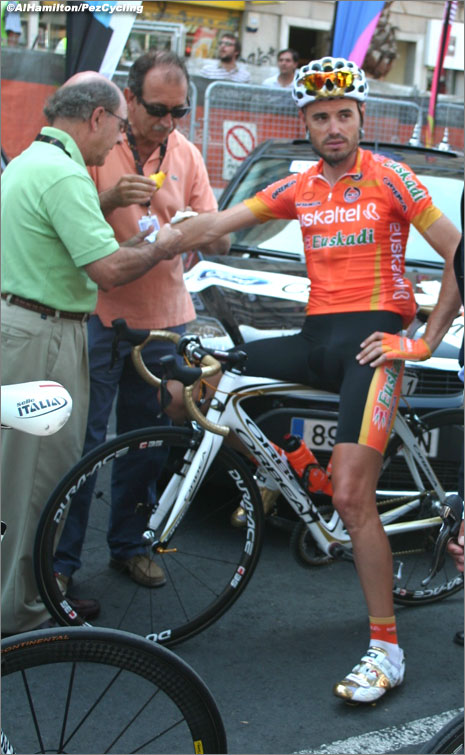 I followed the peloton out of town until the turn off for the short cut to the finish, and then headed off to see the race further along the road in Aspe. This is a small wine producing area with a sandy soil that produces mostly white wine; it makes a change from olives and orange trees. 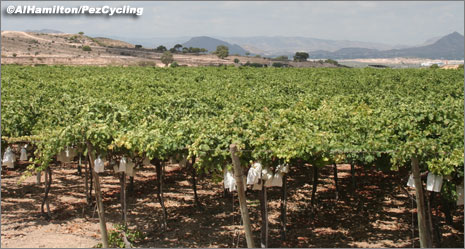 In Aspe the police allowed me to drive up a one way road the wrong direction to get some photos and then held the fans back to let me join the race convoy. Trouble was, I wanted to go the other way, but didn’t have the heart to disappoint them. 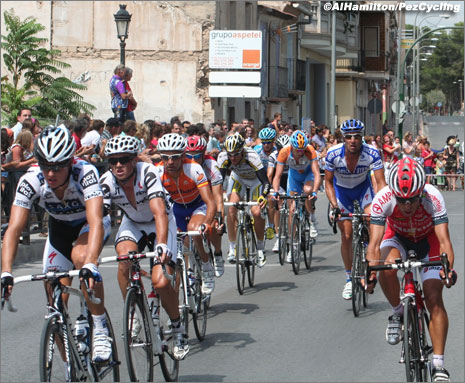 The big break of the day came through with Vino, Gerrans, Hesjedal and all the others, but it would be a brave man who would have put his money on them staying away as Caisse were chasing hard for Valverde. 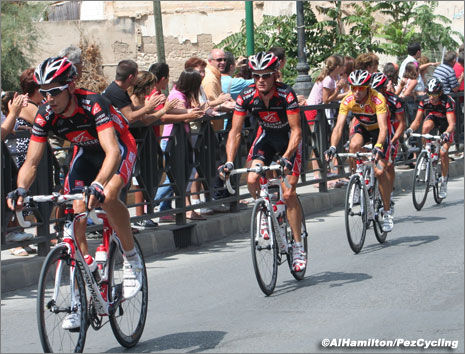 Most of the team were on the front and Alejandro looked pretty cool and calm about it all as he would be saving himself for the Alto de la Cresta del Gallo on the outskirts of town. 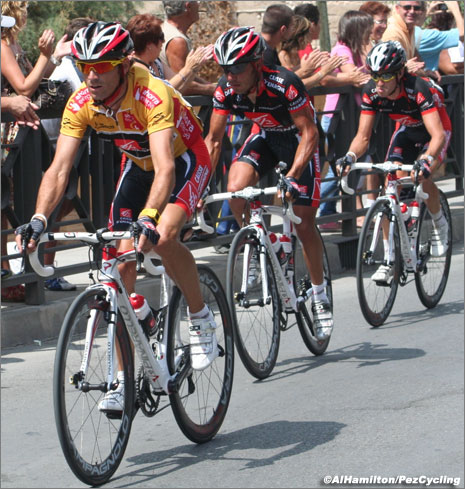 After I had done a U turn on the main road (no traffic), I headed for the climb of the day; 11 kilometres from the finish line. Parking was not easy and two cars had gone into ditches at the side of the road. This is a narrow, rough road, but built for excitement and noise from the bike mad fans. 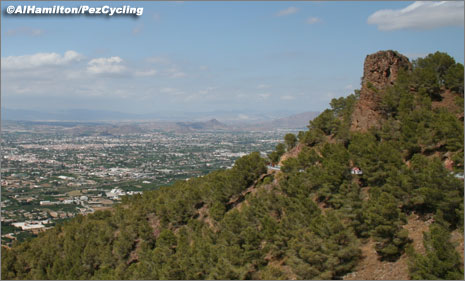 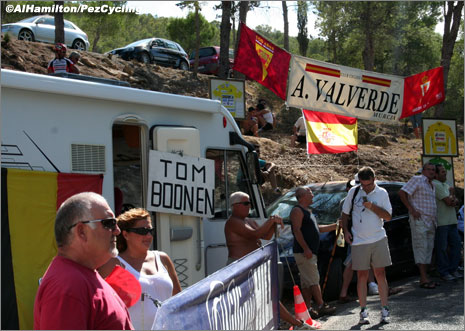 Every race you go to in the world you will find Belgians in camper vans and most of them are Tom Boonen fans. 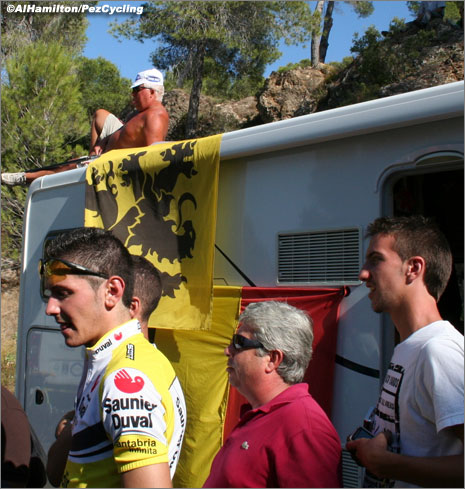 The couple I met were from Antwerp and go to the Tour and lots of other races. I don’t know if he always has a lie down on the roof, but today it was the best seat in the house. 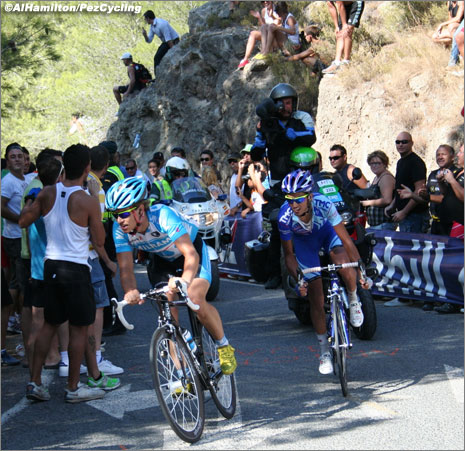 First up were Gerdemann and Intxausti, but the chase was on behind. 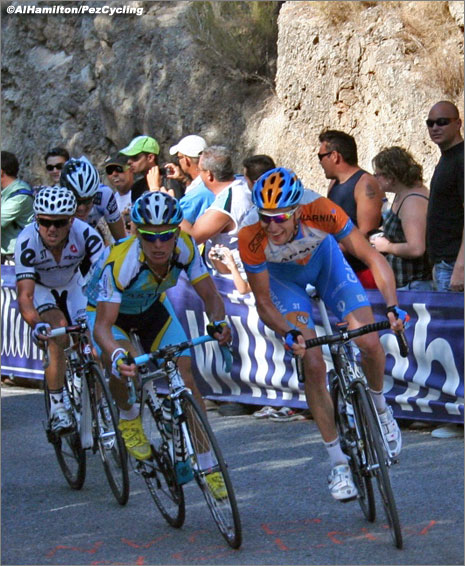 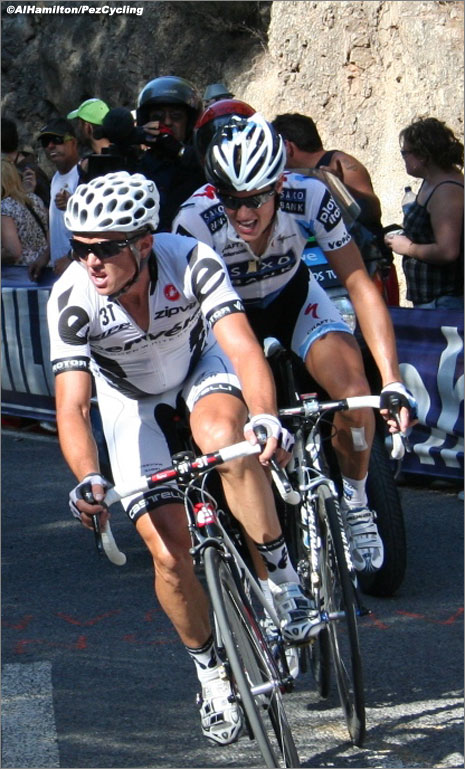 Then the four behind with the fast men of the day; Vino, Gerrans, Hesjedal and Fuglsang. After the remnants of the break there was a huge roar from the fans as their reason for being there, Alejandro Valverde, leads over the top. 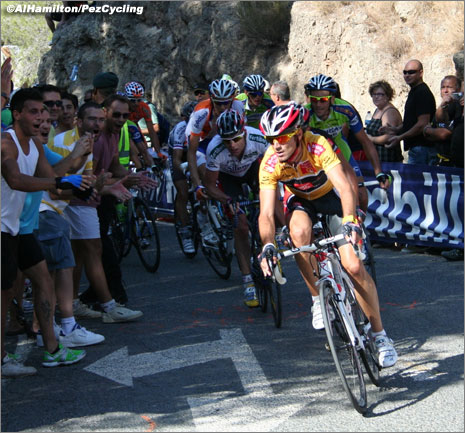 Followed by all the stars, Ivan Basso looked to be particularly cool about the whole thing. 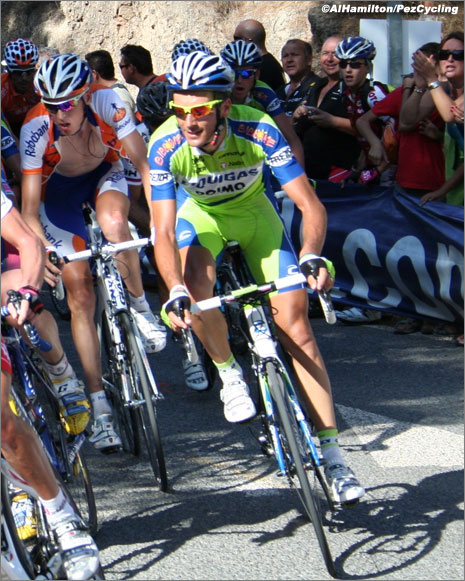 In the group was Matt Lloyd who was climbing next to Astana’s Zubeldia, at the start Matt was fresh and said he was feeling good and the previous day hadn’t been so hard, but there was much more to come, especially the stage to the top of the Sierra Nevada. 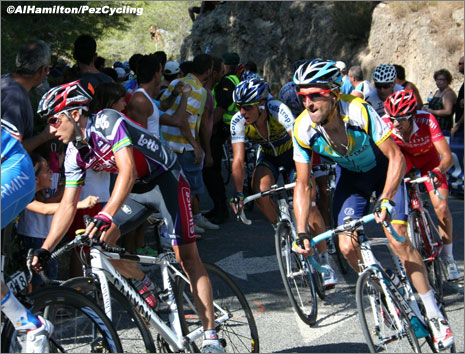 There was an intermediate group with classicsman Roger Hammond on the front. 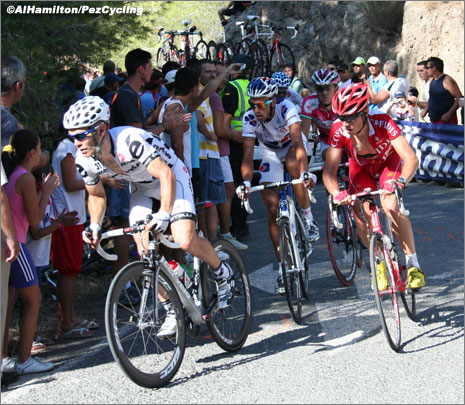 Then the big group came with Greipel, Cancellara, and World champ Ballan in the middle. 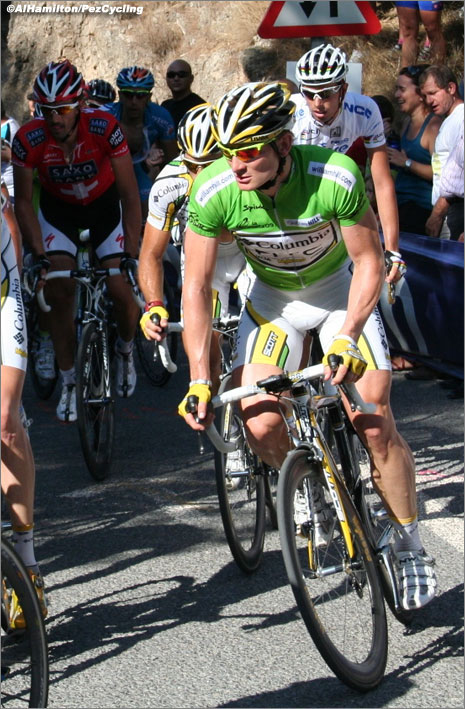 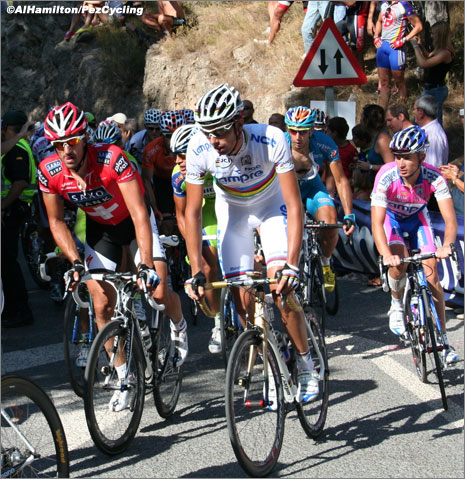 Then at the back was the “Belgians Blue Eyed Boy” Tom Boonen, he got a big cheer and no jeering like the other day! 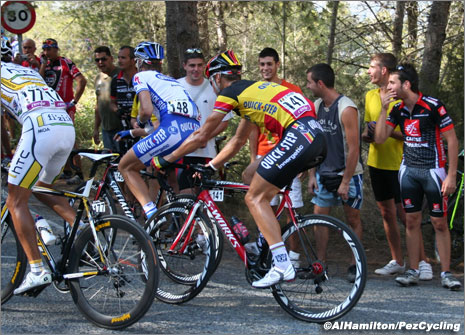 That was all the excitement over for the day, and it only left me to get off the hill, which took an hour and that was the start of my problems with Murcianos. First, I was pestered by the man from the Valverde fan club to take a photo of his display, I said I had, but he kept insisting. Then he decided I was American, and that was why I wasn’t doing it. In the end it was easier to agree I was from the U.S.A. and take the photo again. Then I wanted to by some water at a petrol station but two “young gentlemen” had bought 5Ђ worth of petrol for their scooter and were paying in 5 cent coins, I gave up and left. Then I noticed the worst thing, someone had stolen my car’s accreditation which was stuck to the outside of the windscreen, in previous years it was always on the in side, now I know why. 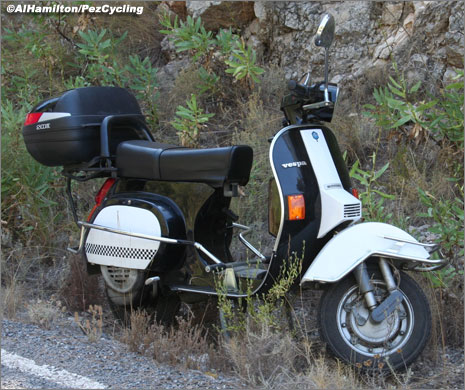 But, to cheer me up I saw this police Vespa, I don’t think it was a proper police moto, but it looked great. Adios Murcia until tomorrow!