Roadside Pez: After yesterday’s stage with all those people, I was hoping for a quieter day at the office, which is my car and it’s filling up with so much rubbish I’ll soon be able to use a shovel to clean the interior! As always on a race, the best laid plans go awry, and today was no different, but it was all the usual fun in the end.

So far on this Vuelta, I haven’t had the chance to sample the “Start Village” as there hasn’t been time, or in the case of Valencia, it had been blown away in the storm. First thing to do is to get today’s AS sports paper, always good information and interesting. 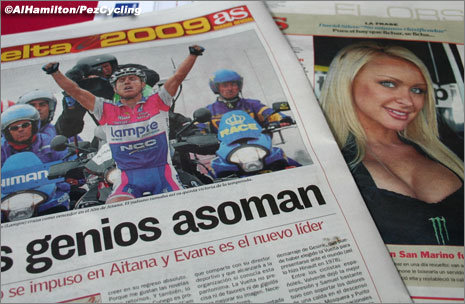 Next was something to eat; on offer was the usual cheese and little sausage roll things with different fillings, very nice, but there were some other “tooth some” offerings. 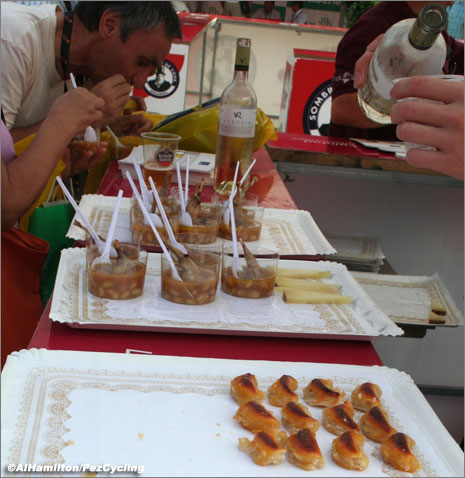 The first was beans with either leg or wing of young Pheasant and the others were mixed tapas, croquetas, gambas and the ubiquitous tortilla on slices of bread, just what you need at around 12 o’clock. 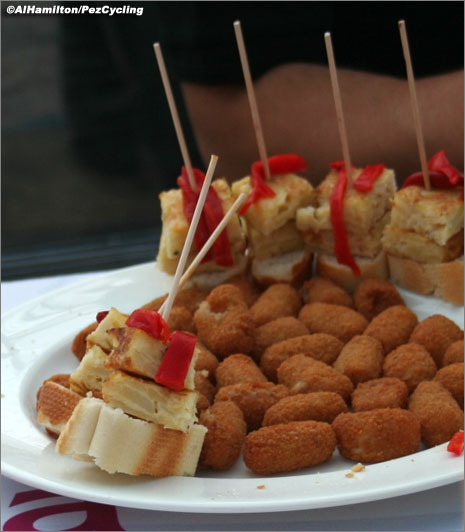 There is also a stand for the Spanish pear producers, but I’m not sure if it’s the product or who is giving them away that causes the interest? 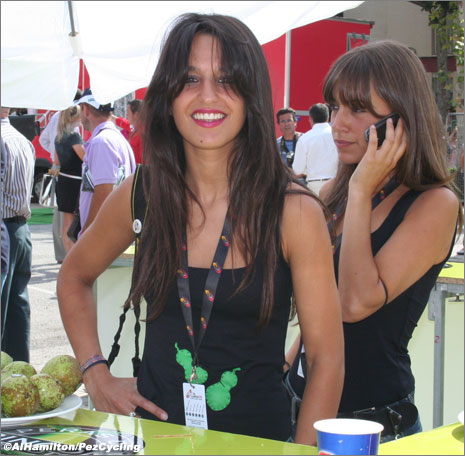 You can only eat so much of these small things and look at beautiful women for so long and then you have to go and see the riders sign on. This is always the same, they trickle in to be introduced to the crowd, then usually a load will all turn up together making to much work for the announcer, I don’t know if it’s planned. The fans love it as it gives them a chance to get autographs and their photo with the stars. 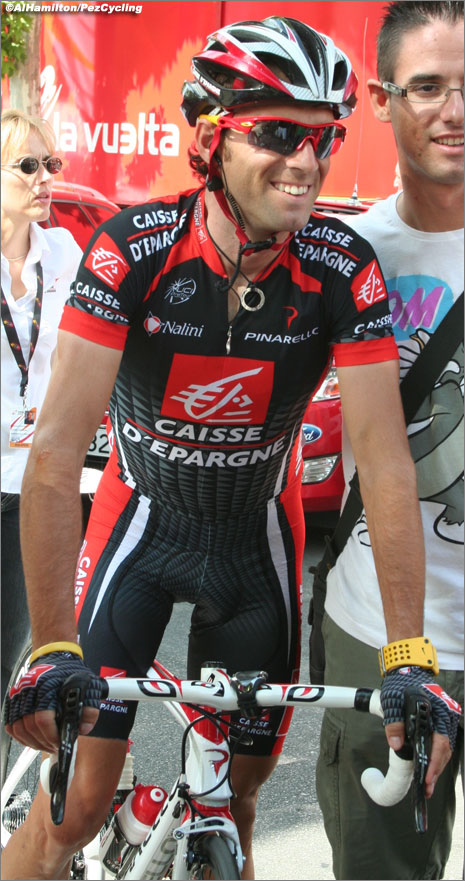 Alessandro Valverde is probably the most popular, followed by “Samu” Sanchez. 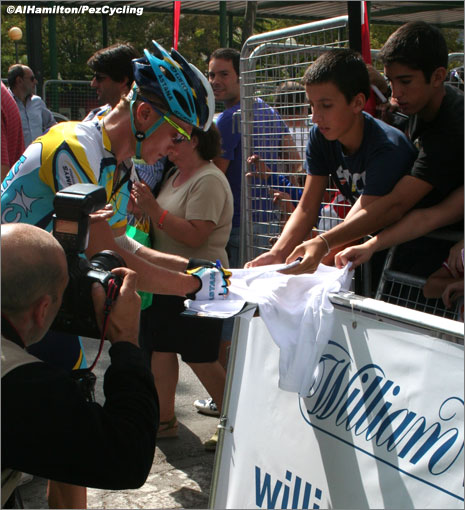 Astana’s Vinokourov is always pestered for photos and signatures as is Oscar Freire. 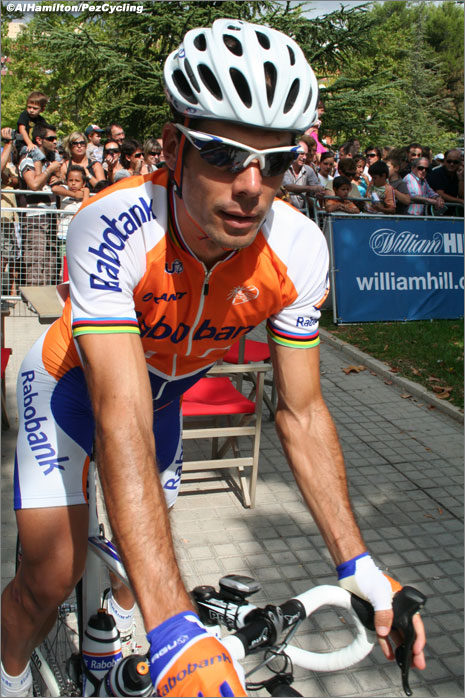 I had a word with a couple of riders: Tom Boonen was still sore from his crash in the time trial in Valencia, but was feeling OK. 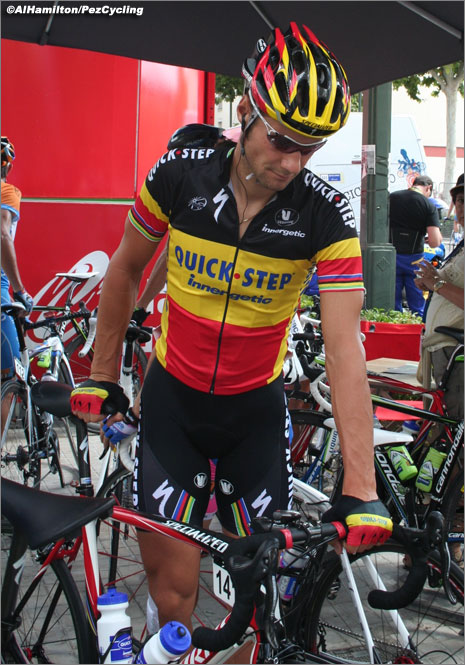 Pez favourite, Martijn Maaskrant said he wasn’t feeling too good at the start of the Vuelta but thought he was getting better as the race went on, good news for girlfriend; Lien. 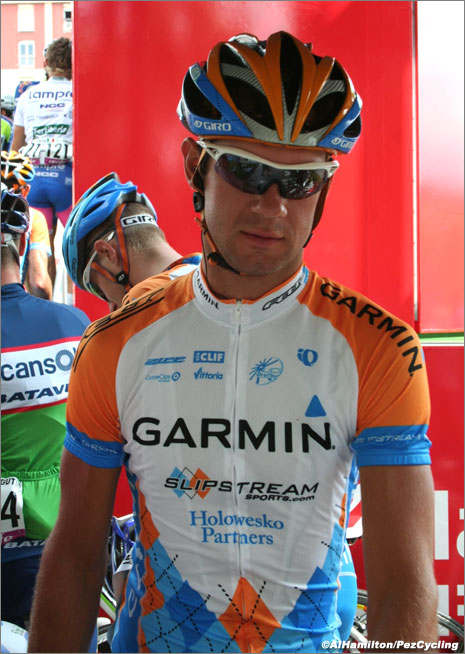 Young Australian; Matthew Lloyd is having a fair Vuelta, like everyone else he thought yesterday was very hard as today was also going to be. I asked him if he would have more work now that team leader Cadel Evans was in Gold. He knew it would be difficult as there are seven riders still in with a chance. 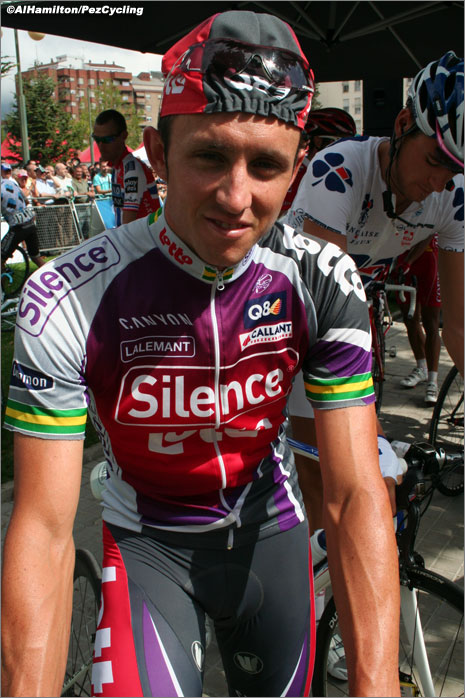 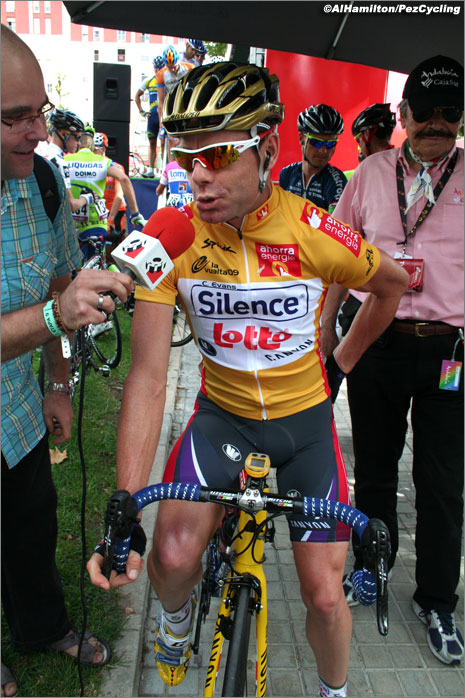 You probably think all the journo’s are balding, over-weight slobs, OK some are, but there is one young lady who knows all the riders and has no problem getting a word from them, I wonder why? 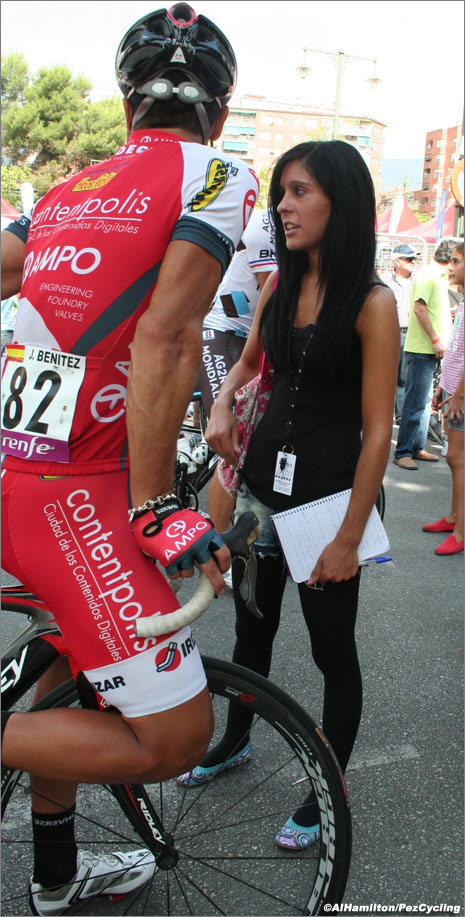 The riders are called up to the start line and they are all chatting quite amicably with the battle still to commence. There is always one late rider and today it was Sammy Sanchez, he was so late even all the team cars had left! 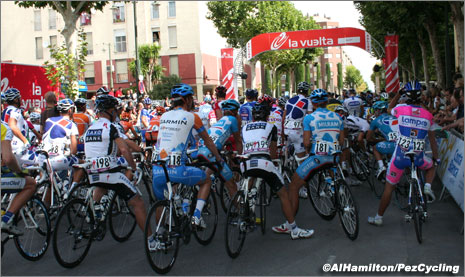 The plan was to follow the race out of Alcoy then turn off and make my way to the Alto de Toudons which is very near yesterday’s finish and uses some of the same roads. 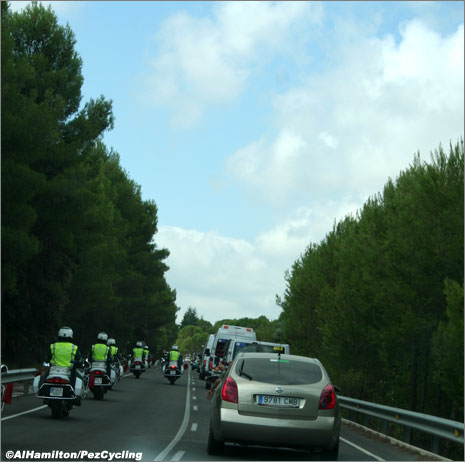 My view of the race was the back of a car and lots of Police moto’s. 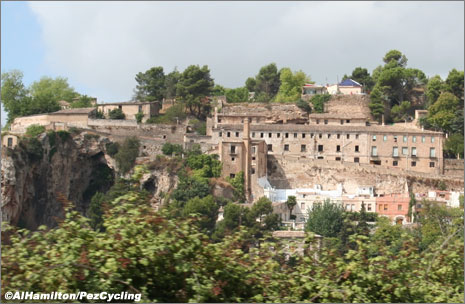 We passed an old monastery on the way to where I thought I could get out of the convoy, but this wasn’t to be until much later and my GPS didn’t have the road-works for a new autopista at its finger tips, but eventually I got to the village of Penaguila at the bottom of the climb. 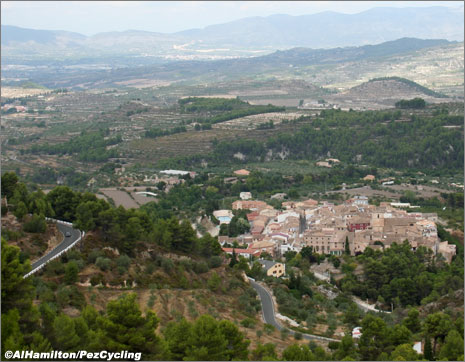 At the top there is the Safari Aitana where the feed was to be, I spotted the two female masseurs of Garmin, but they didn’t seem sure about becoming Daily Distractions, but they did give me a small Mars Bar. 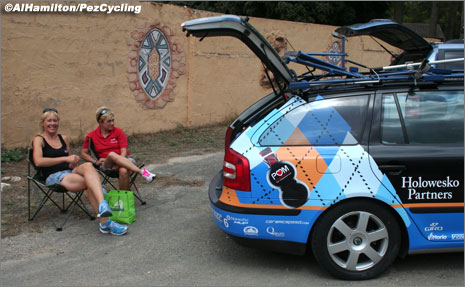 The break was now over 6 minutes up on the bunch, I knew this thanks to my new radio scanner thanks to John. If you go to a race these are a must for listening to Radio Tour and knowing where the race is and what’s going on. 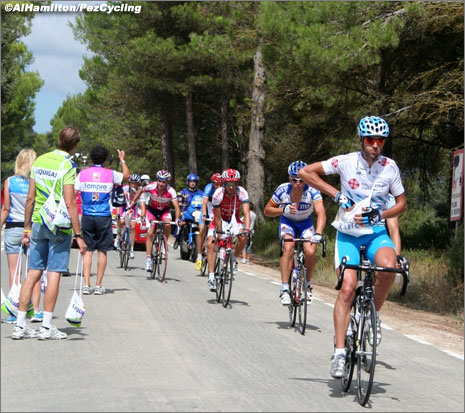 After the break had got their musettes, the bunch roared through, yesterday’s stage winner, Cunego was one of the first, maybe more from him later? 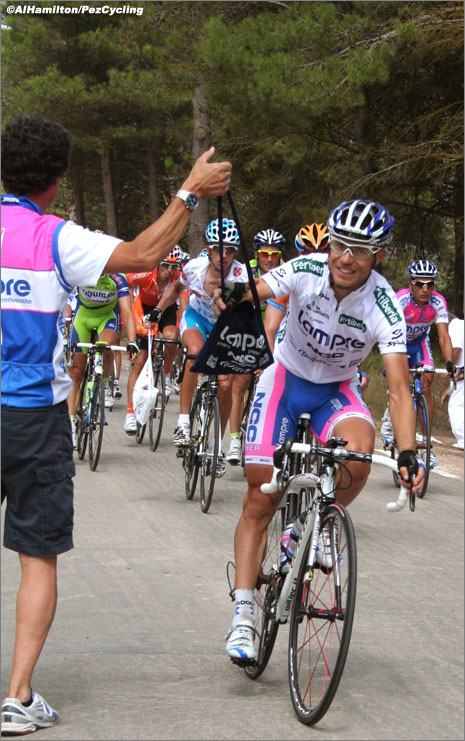 I got in behind the team cars to follow the route over the hill of the Torre de Manзanes, at this point Mikel Gaztaсaga was dropped from the bunch, sadly never to see them again. 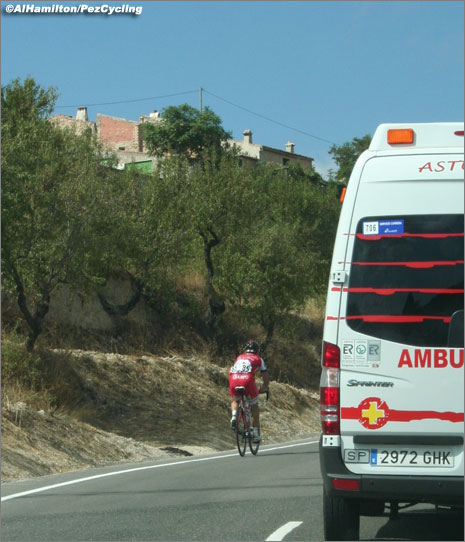 I found the turn off for the short cut to the finish and got in behind the Guardia Civil cars, now these guys have open roads and don’t slow for anyone which is just what I wanted, don’t ask what speed we were doing, but I guess I had the law on my side! 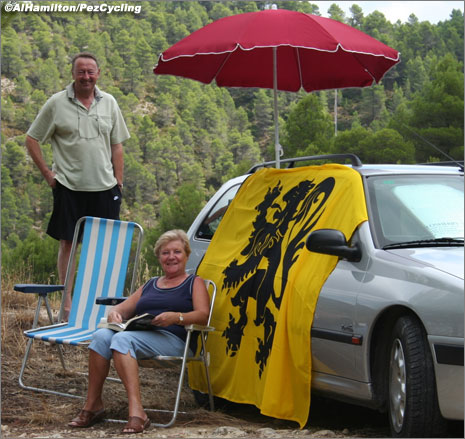 What about the fans I hear you ask? It was a Monday, people should be at work, OK so the Belgians were on holiday, but on the climb of the Xorret de Cati it was like the day before on the Aitana, thousands of crazies, but all very happy to be there. 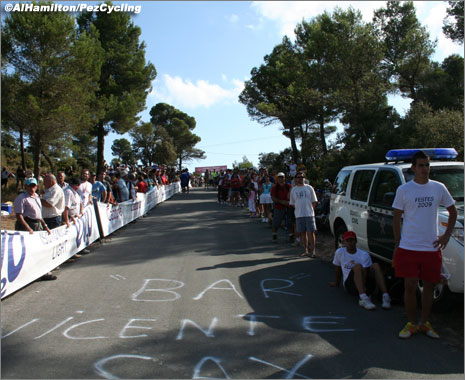 I wanted to see the finish, so down the other side and into the parking in time to watch the enormous TV behind the finish line. Into view came Gustavo to a big cheer: he deserved it. 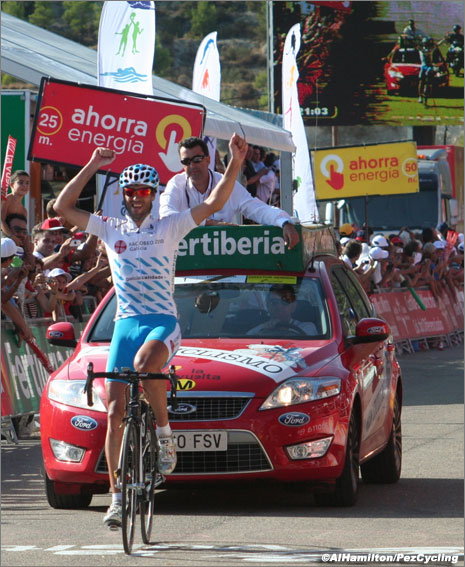 We didn’t have to wait long for the sprint for third place and the Gold jersey, and there was Valverde taking the time bonus that he needed. Can he keep it? That’s the question. 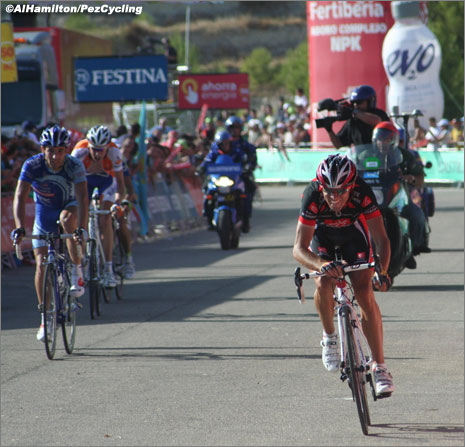 Gustavo Cйsar Veloso will have his name put on the monument alongside the past winners; “Chaba” and Eladio Jimйnez. 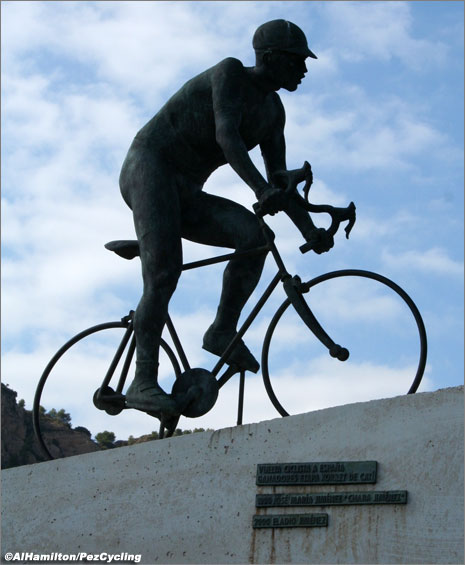 Tomorrow we are in the land of the Balaverde (Green Bullet); these are the roads he trains on, more action to come; that’s for sure!