Roadside Pez: I don’t think I have ever seen so many people in one place in my life! The last 10 kilometres of stage 8’s summit finish on the top of the Aitana was like a football crowd, except they were cooking their food, playing music, dancing, and generally enjoying themselves at over 1,000 metres altitude. Spain knows how to FIESTA!

My day started late (for a change), as I had made a mistake when I did my Queen Stage reconnoiter article last month. I had thought the race route took the old road up to the castle village of Guadalest, but it didn’t, it actually went past my house and up the much steeper and higher new road, so I only had 200 metres to get to the course. 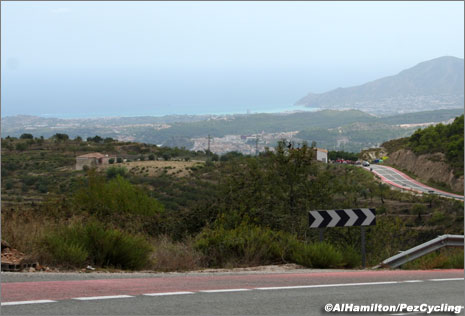 The new road out of town and up the hill is very steep in places and climbs to 680 meters from around 200 meters in 7 kilometres. On the way up, I took some photos of the views, there were people already getting their position on the roadside 3 hours before it was due, but then lunch had to be made and beer and wine had to be drunk first. 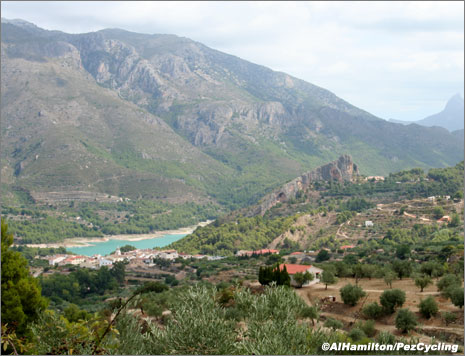 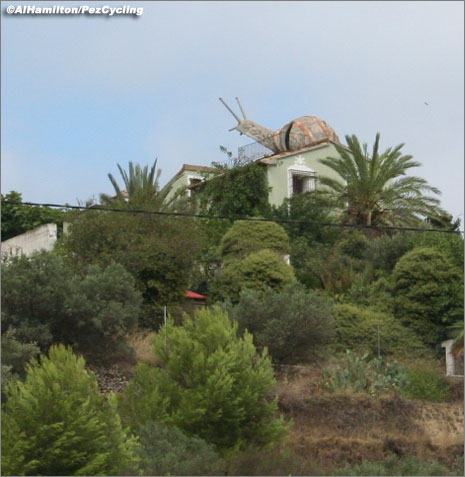 On the way up, there is a house with an enormous snail on the roof: this used to be an advert for a museum of small big things, but now it’s someone’s house. I’ve no idea what they use it for, but it must be easy to give guests directions. 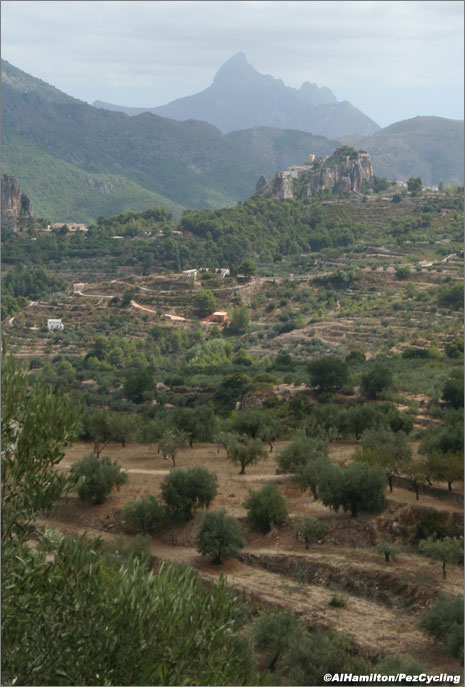 In this area, the main crops are olives and almonds – the trees are every where, so it was no surprise to see a couple up an almond tree collecting the last nuts. Vuelta or not you can’t hold back nature! 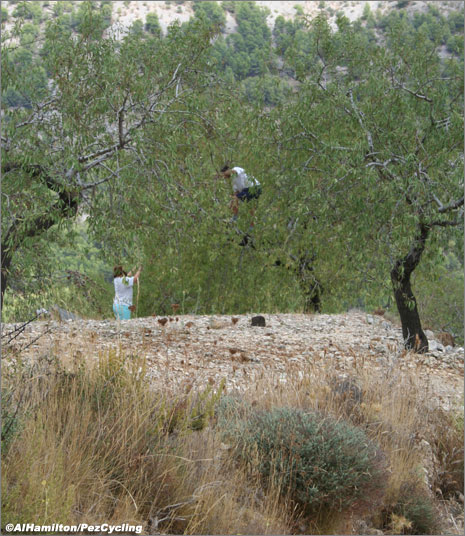 On the way up the climb of the Aitana, to the crossroads that the race will pass twice, which is called the Puerto de Tudons, there were many fans, some wanting a lift up. Near the top there is a house that at one time was a nunnery and is now owned by French people, eventually it will be a hotel, but they have been working on it for two years, so who knows when it will be ready. 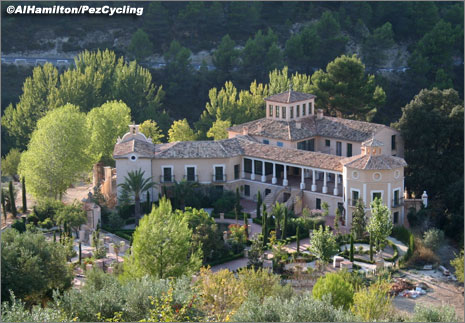 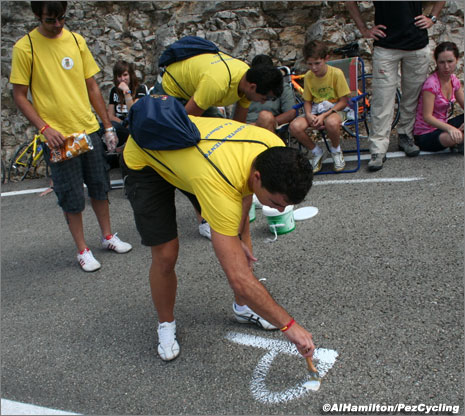 Near the junction the road painters were out, more on that later. 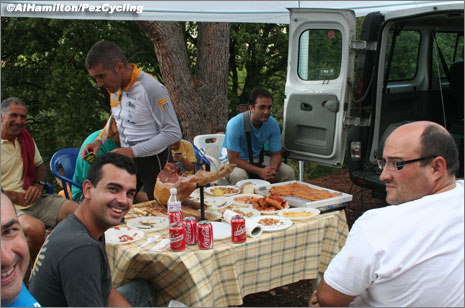 The bus to take the press and photographers to the top of the Aitana had left at 1 o’clock, so after I parked my car in the old (unused) military base next to all the team buses, I was facing a 7 kilometre hike up to the summit. Two of my friends, Tony and Javi were with a group who had planned their day to perfection. Lots of food with a jamon on the bone and two TV sets so they could watch the race and the motorbike GP at the same time. 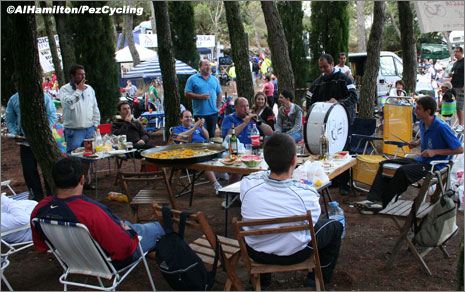 I could have stayed there all day, but a bike race needed watching. At the cross roads there were literally thousands of people waiting for the first pass before heading up the mountain side.

Hunger was starting to set in, but the queue for the sausage and coffee stall was as long as the mountain pass. 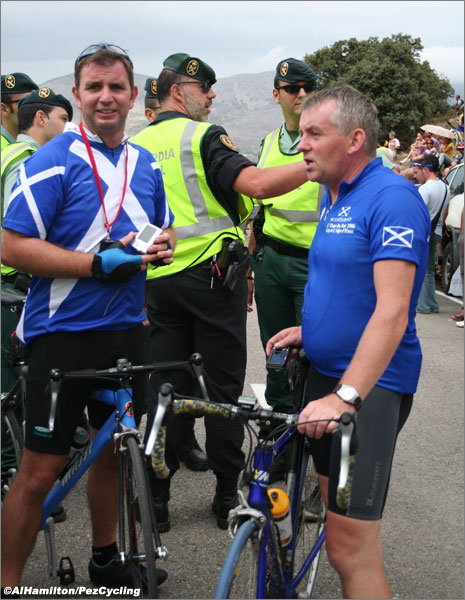 It’s amazing who you meet at a bike race. I spotted two cyclists with Scottish jerseys, it only turns out that I knew one of them from a long time past. David Walsh was here with his mate who lives in the area, as it turns out not far from me; it’s a small cycling world. 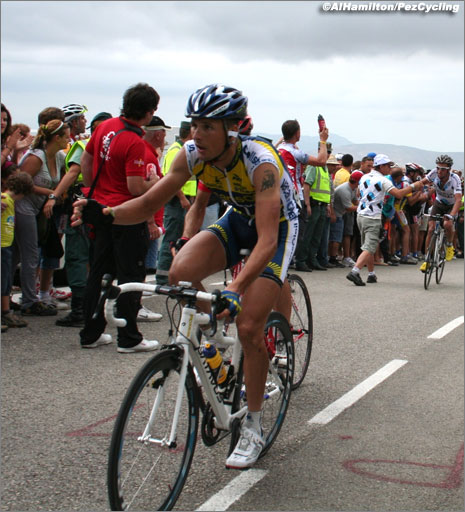 The helicopters started to hover and the Guardia moto’s flew past, so we knew the break was on its way, first over was Rabobank’s, Peter Wiening followed by Moncoutie and Hoogerland. Hoogerland was the only one I managed to snap. In the next group Valverde was being led up by his teammates. 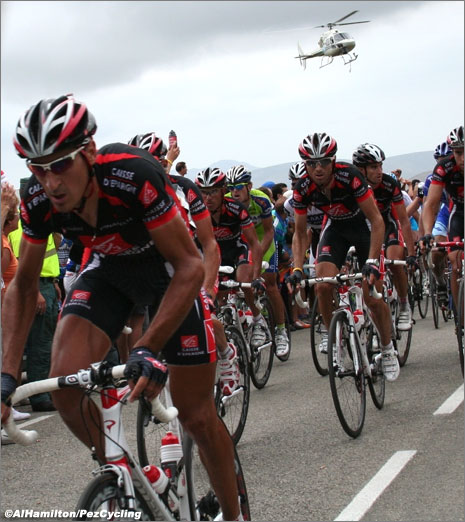 Once the main group had passed, it was time to start the trek of 6 kilometres and 600 meters altitude up towards the summit of the Aitana. Luckily for me, there was a good corner for photographs after a couple of K’s, and there were so many fans further up it would have been impossible to see anything. 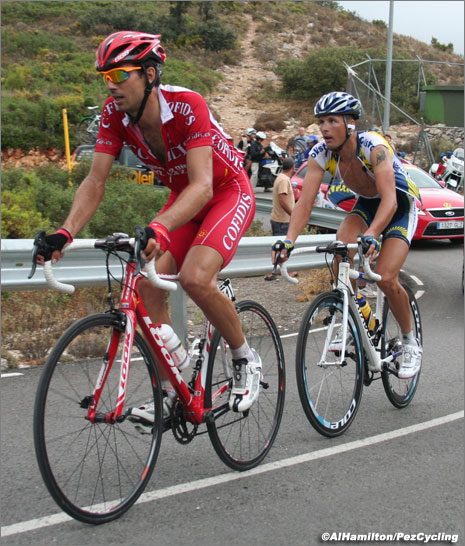 Moncoutie and Hoogerland had been out front all day, and from where I positioned myself it looked like they had it in the bag. The next group had “Samu” Sanchez and the eventual stage winner, Cunego, along with all the other hopefuls. 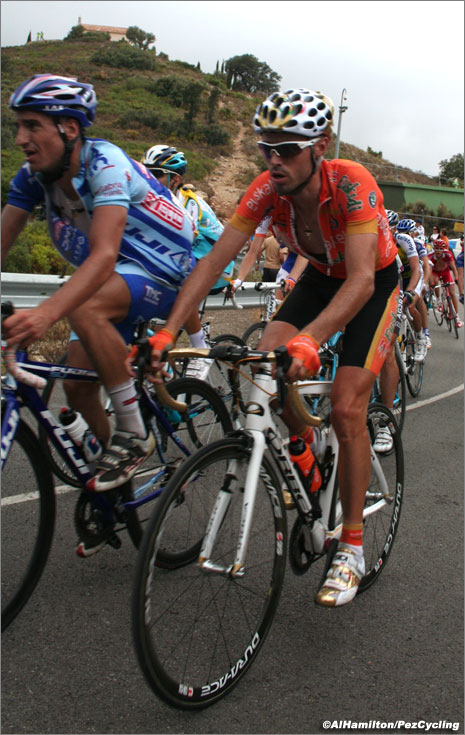 Trailing by quite a few minutes was comeback man Vinokourov, followed by a group led by World Champ, Ballan, and a fed-up looking David Millar. 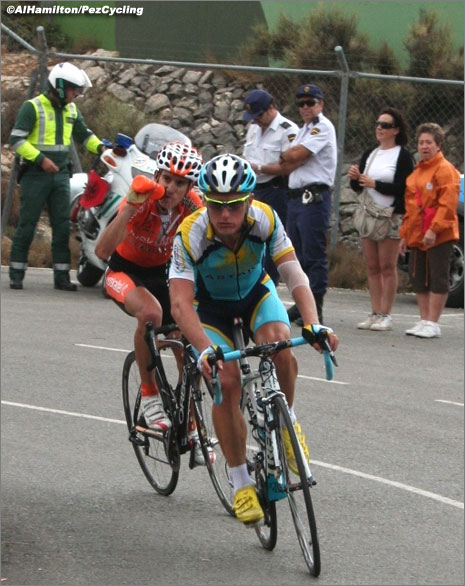 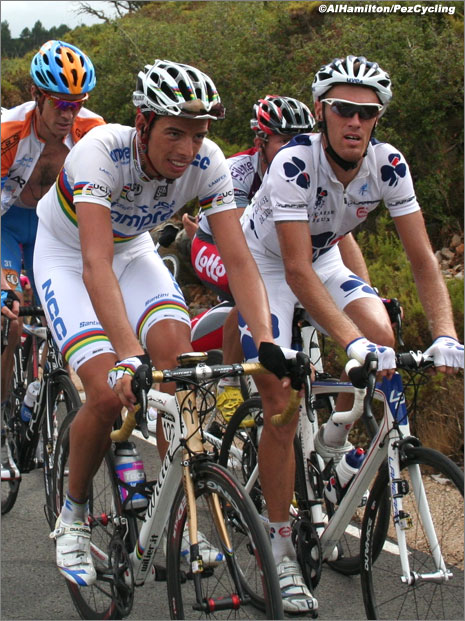 I started to walk back up the mountain, as more riders were dragging their sorry bodies up it, first the Gold jersey group of Cancellara, then the Green jersey of Greipel along with a sorry looking Tom Boonen. 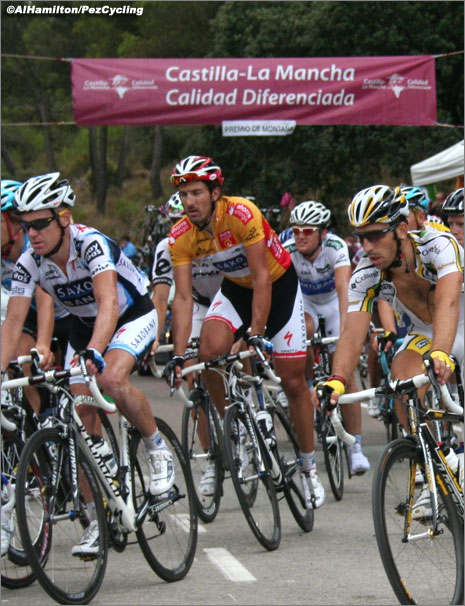 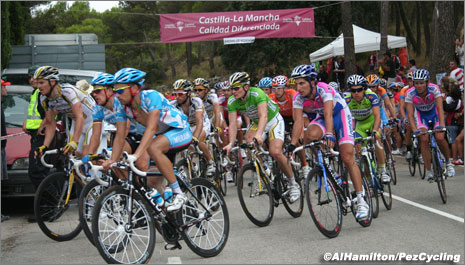 My mate from the time trial; John Anderson rode round the last part of the circuit and up to the finish line on the Aitana. This caused a great stir amongst the photographers as it turned out he was the first over the line as no one else had been allowed up, but there were more behind him. 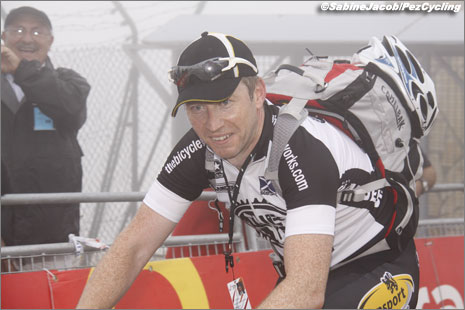 John Anderson, with PEZ helmet in tow, was the first across the line today.

Talking of Mr. Boonen, one of the fans wanted to get a message across. Later, I spotted the UCI chaperone, let’s hope he won’t be keeping any doper company. 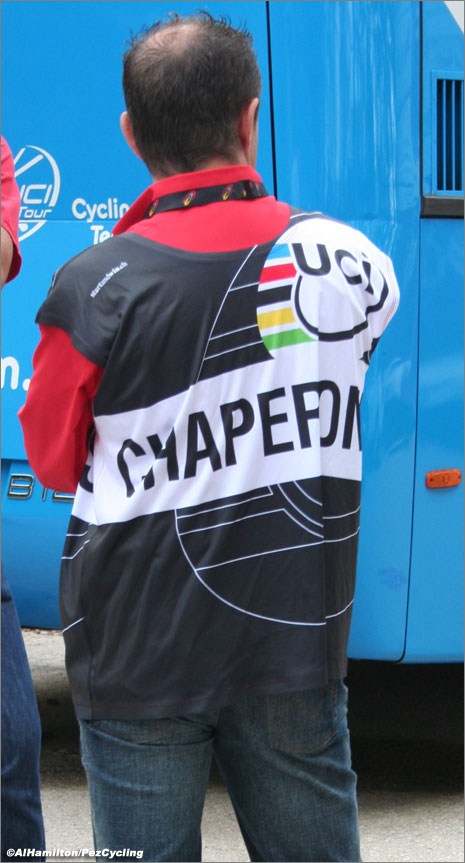 Lunch was an apple!

Vuelta’09 St.9: All Hail The Underdog