Roadside Pez: Rain! Yes, yesterday we had unbelievably hot weather, and today the temperature dropped and the rain came down, but this was not going to dampen my enjoyment driving round the Valencia Formula 1 Street circuit…and watching a bike race of course!

Valencia is about an hour and half drive, but I had to be inside the race circuit before 12:30 and in reality needed to get there early so that I could park and get out behind Martijn Maaskrant (Garmin) to follow him round the course. Martijn has been interviewed on Pez before and I interviewed his girlfriend Lien earlier this year, so he was the man for us, and since he was sitting 3rd from last it meant I would have the rest of the day to watch the race. 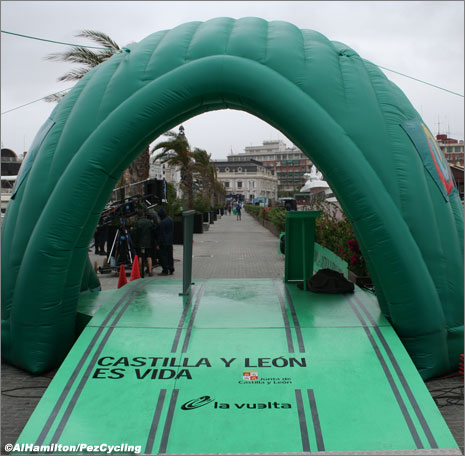 First, I had a walk around to see what was going on: not much, as the sea in the Americas Cup harbour was terrible, and everyone was hiding, even the bar was empty. 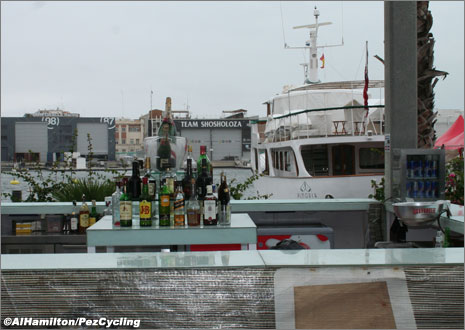 Down at the docks, there were all the big yachts, but even where the teams worked on them in big hangers: there was no one to be seen. 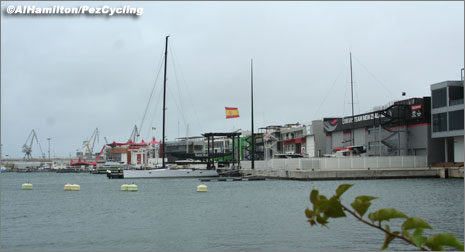 The riders were coming back from testing the circuit and none of them looked very happy, the worst off was Sammy Sanchez who had crashed on one of the slippery corners. I don’t like rain, but we hadn’t had any in this area since the middle of May, so it was overdue. 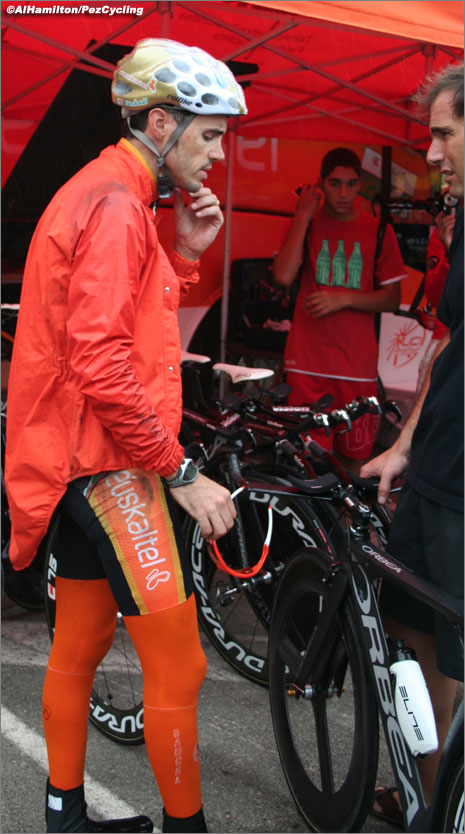 Time for food! The last two days I’ve managed to have a nice lunch, but today I knew this was not going to be possible, so a good late breakfast would have to do. Better still, my good mate; Astana mechanic, Alan Buttler bought it for me, honest I left my wallet in the car. A coffee and a ham and cheese napolitana, a sort of pastry thing went down very well, thanks Alan and also thanks to Astana press officer; Philippe Maertens for the T-shirts, maybe I’ll get that interview one day? 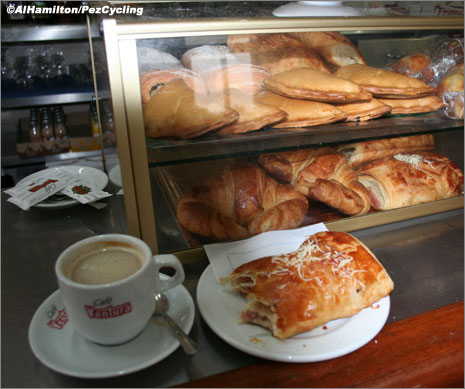 Also at the Astana bus, three of the podium girls wanted their photographs taken on bikes that were waiting for the riders to warm up on. It was nice to look at those smooth, aerodynamic and sleek lines…the time trial bikes were nice too! 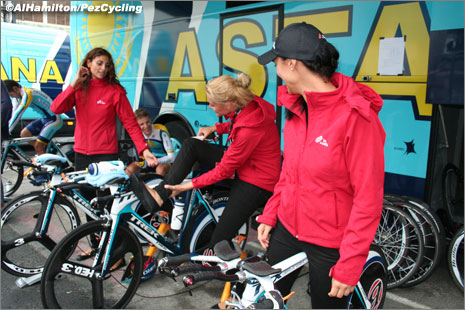 The team cars were lining up waiting for the riders and the Garmin car was there, a bit of pushing and not moving my car when asked and I was on his bumper. It was meant to be Chann McRae, but I think it was Johnny Weltz behind the wheel; this wasn’t a problem as we wouldn’t be fighting for a position on this wide road. I had my mate John Anderson to use my camera, I wanted to be Alonso!

All was going well, although very wet and dangerous, until coming back to the Formula 1 circuit Martijn had a rear wheel puncture. 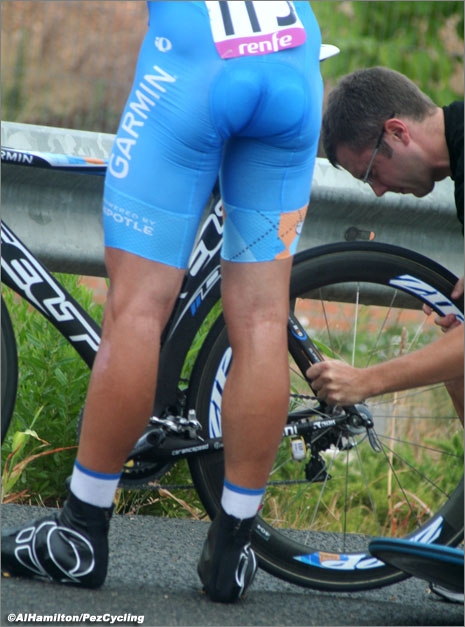 A quick change and he was off again down towards the amazing new architecture of Valencia with its science and water parks, well worth a visit just to wander about, but better on a sunny warm day, unlike this one! The Vuelta started here with a team time trial in 2002, won by ONCE. This was the first Grand Tour that Pez had been given accreditation and the Daily Distractions started, fond memories.

The course wound its way up and over the futuristic buildings and bridges as the rain kept falling, but I was enjoying the ride even on the tight bends, I never thought I would be a Formula 1 driver specially in a 1.9 Renault Diesel!

Martijn finished his test with a time 4 minutes and 10 seconds slower than the unsurprising winner; Fabian Cancellara. Not bad considering he had the puncture and has been suffering with a bad knee. 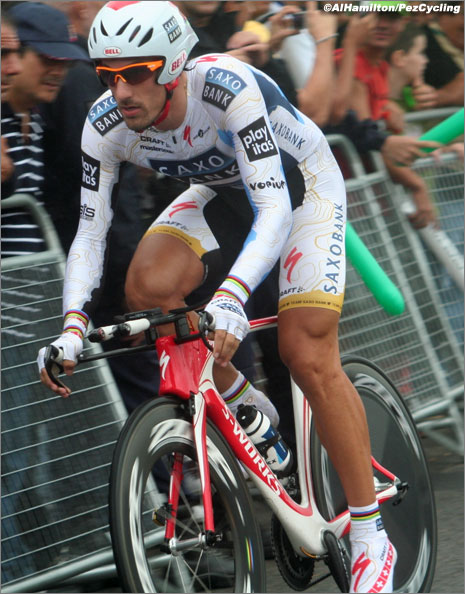 After I had finished my race against the clock there was time to watch the faster men at work, most people including William Hill’s, had their money on the flying Swiss Cancellara and for him to take the Gold jersey back from Andre Greipel, crashes allowing. 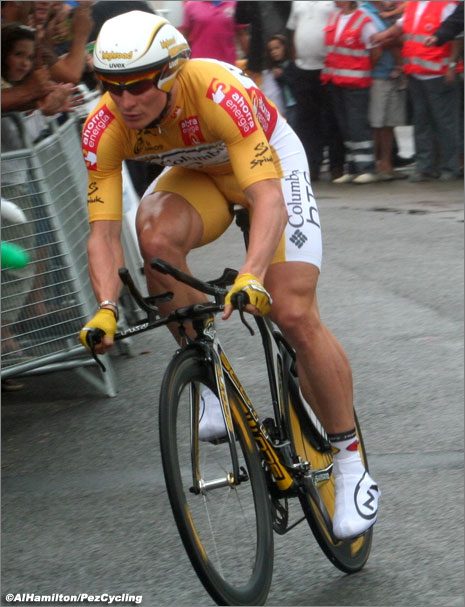 If you see Greipel, he’s not built for the time trial, more for all-in wrestling and sprinting, strong upper body and his thighs are bigger than most people’s waist: the guy is all power. After he had gone, there was time to say “hi” to Sean Yates, Astana DS, in his day he would have loved a course like this, at one time he held the record of the fastest time trial in the Tour de France. 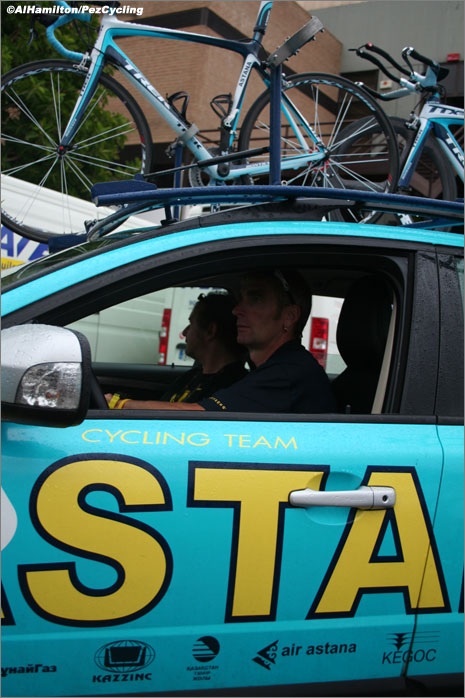 It only left me to run back to the press room to watch the finish over the heads of the other journalists, no one wanted to be out in the rain. 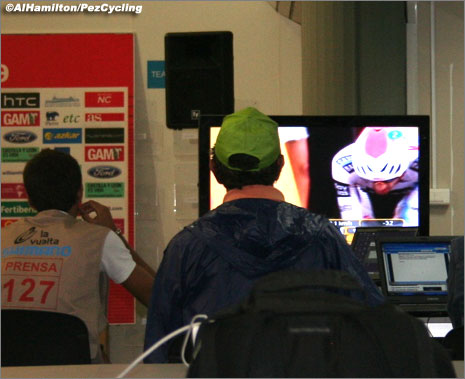 Tomorrow is one of the big days of La Vuelta and for me one of the most difficult to know what to do. There is a bus to the top of the summit finish on the Aitana, as there is no room for cars. It leaves at 1pm, but the finish isn’t until 5pm and there is nothing there, so there will have to be a plan B and probably C, D and E, for sure there won’t be time for lunch again!

Inside La Vuelta With Fredrik Kessiakoff