Race Report: Another hot and dry day here at the Vuelta, where a 171km jaunt from Alicante to Alejandro Valverde’s hometown of Murcia awaited the peloton. A huge group of 19 escaped, and from that bunch, Simon Gerrans beat 3 other survivors at the end to take a fine win! Read on!

Needless to say, the Caisse d’Espargne team of race leader Alejandro Valverde was left to do most of the work behind. The workload upfront was evenly being distributed by the men, even Vino, who was oddly in the break. Maybe he thought the course suited him? Maybe he just wanted to get his mug on TV? We’d have to wait until after the race to ask him the question. Then again, was there ever a break that Alexander Vinokourov did not like? Yeah, good point. 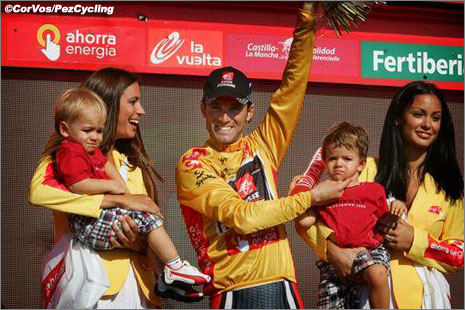 At the end of another tough day, Alejandro Valverde was still in gold – except this time, we was at home in Murcia.

Other notables in the break were the Contentpolis boys, who with 3 riders in the break were clearly trying to make it look good for their hometown of Murcia. Liquigas and Vacansoleil aided in the chase at times in the peloton, but still it was mostly Valverde’s boys doing the work, trying to keep the break manageable, which at 33km to go still had over 7 minutes in hand. 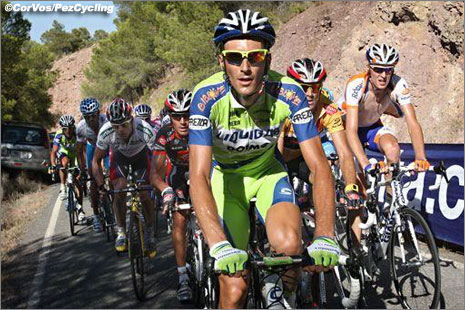 The favorites stayed close to each other today: no one made any real moves.

In the closing 25 km, a 5 km long Cat 2 climb awaited the group and it would be there we’d see the wheat separate from the chaff.

At 22 km to go the break was injected with a shot of disorganization as riders began looking at one another before the climb started, and the rhythm went out the window. The climb ahead was not particularly steep, but it suited a few riders in the break more than others.

The break had an even 6 minutes in hand. Riders like De La Fuente in the break had everything to ride for as he was in the hunt for the climber’s jersey. With different abilities and agendas at hand, the break was looking incredibly nervous. The first rider to test the water was Milram’s Linus Gerdemann. Contentpolis’ Adrian Palomares hooked on and the two made their way ahead. 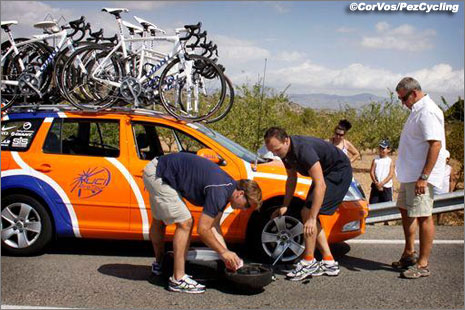 Well, at least it’s not only the racers that get flats.

Behind the bunch began to string out as the chasing seemed more serious. Around a roundabout, some riders just hopped the curb and went straight over, certainly a bit of a fright for the spectators gathered there. At 16km the lead 2, followed closely by the 17 other of the original break had now under 5 minutes. Jakob Fuglsang took the initial pulls as the rest of the break began the final ascent. The 2 ahead had about 25 seconds in hand. 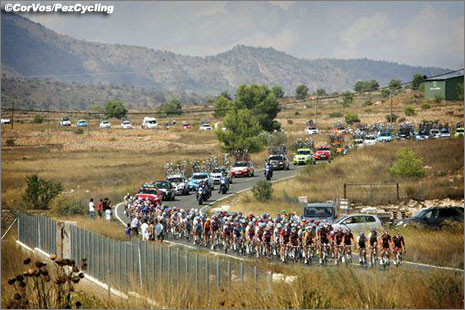 Up front with 15km to go, Gerdemann jumped Palomares and gapped him, but the Spaniard rode within himself, and kept the German in sight. Fuglsang behind put the screws to the group and took off, followed closely by Simon Gerrans. That move gave birth to a scorching attack by Vinokourov, who was trying to close the now 30 seconds to the German, now alone up front and looking over his shoulders nervously. From the group behind, and sensing the urgency, Fuji’s Beсat Intxausti took off and set his own rhythm.

Sadly, he flatted just as he had made the junction to Gerdemann, and his day was done. Just after that, Gerdemann was stopped on the side of the road with a mechanical. He looked completely gutted as well from his attack. The lead 19 had completely blown apart and those with their eyes on the stage victory played their cards. Vino was joined by Hejsdahl and Gerrans along with Fuglsang to form a leading quartet. In the main group some minutes behind we saw Liquigas and Caisse driving the pace, and the Garmin squad was keen to keep their man Tom Danielson up near the front for the climb snaking up typical skinny Spanish roads. 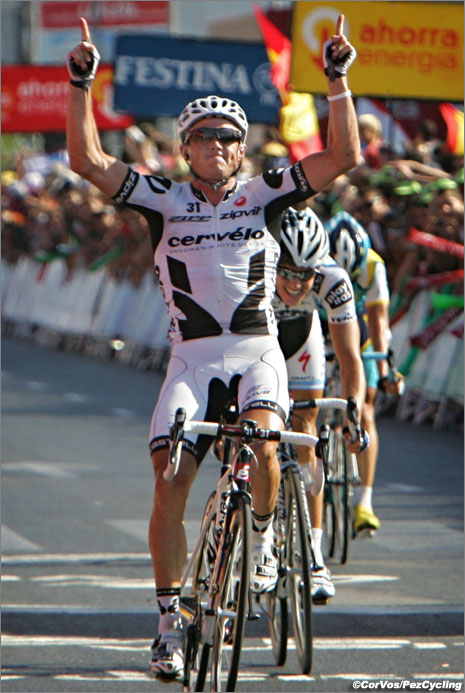 Simon Gerrans was the fastest out of the remains of the break.

Under the 5k to go banner, the leading quartet set up shop and began pulling through until Vino took his first dig, testing the others, who latched on quickly. The cat-and-mouse had begun in earnest. Vino took another dig, which was countered immediately by the Saxo Bank rider Fuglsang, forcing Hesjedal to chase. The move came back and the four men freewheeled for a moment, waiting for the next attack. Vino went again, and again was brought back, but then, from the front, the Kazakh went again. Vino was making the most of his TV time, the first real time as such since coming back from a 2 year doping suspension. Seems the engine looked similar. 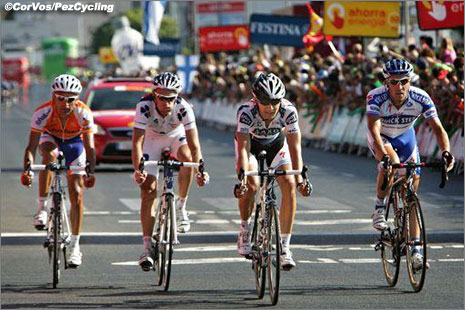 The remnants of the break trickle in.

Once brought back, Hesjedal made a dig and got a small gap as they went under the 1km banner. The Garmin rider lead the way, and the 4 men began a track-style cage match, bobbing and weaving along the road. At 500m, Vinokourov attacked hard but the 3 others hung on his wheel. 2nd in the line of four was Simon Gerrans, who pounced and came out of the Astana rider’s slipstream to get clear to take a fine win. Ryder Hesjedal hung on for 2nd, a fine finish for the Garmin team, but a position they’ve become all too familiar with of late. 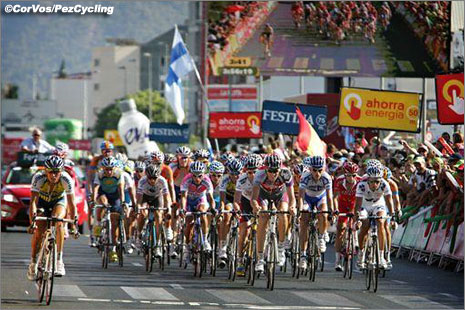 Simon Gerrans has now managed to take a win in each of the Grand Tours – in only two seasons. He took his inaugural Grand Tour stage win during last year’s Tour de France, then took stages in both the Vuelta and Giro this year. Impressive to say the least. 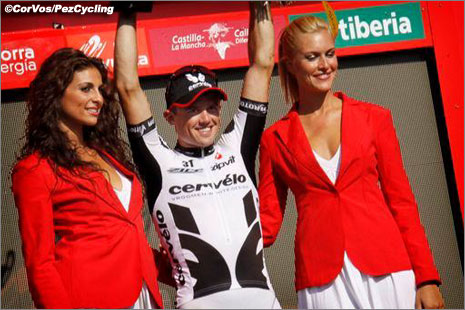 Behind the group rolled in and when the clock was consulted, there were no changes to the overall.